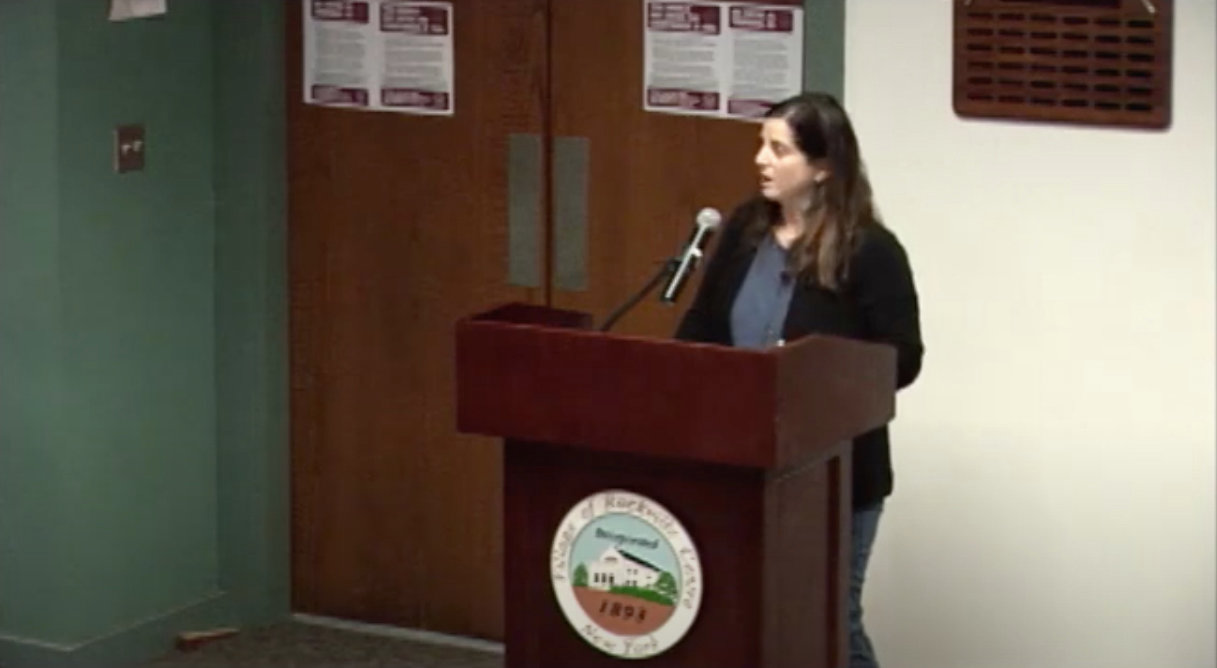 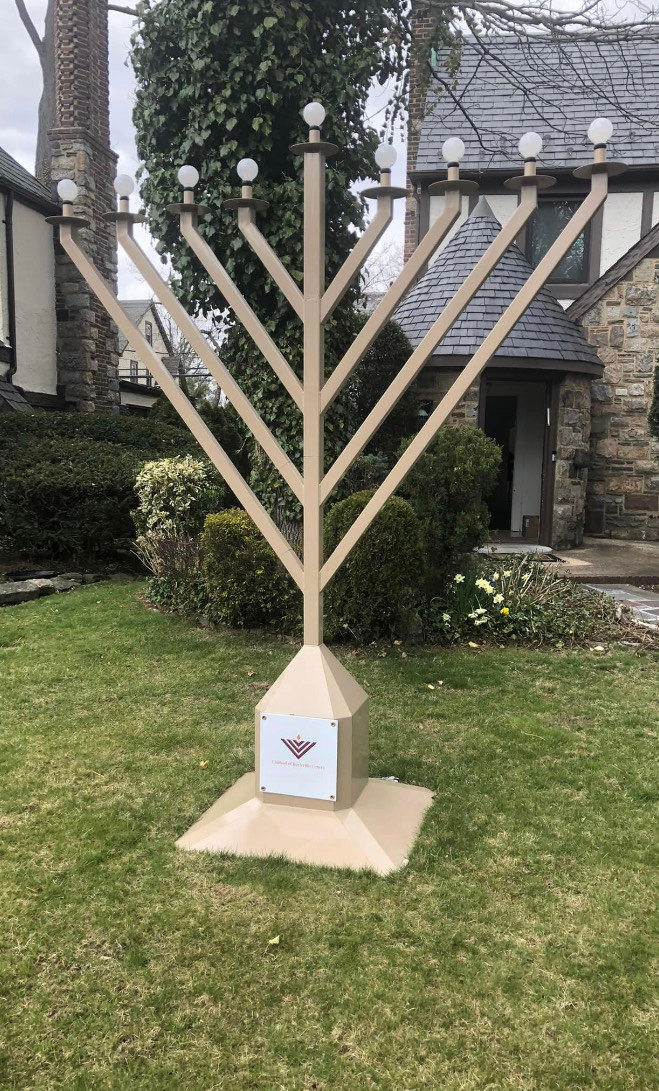 The menorah in front of Chabad of Rockville Centre, which was the subject of comments during a village meeting last week that were seen as antisemitic.
Courtesy Joel Ezra
Previous Next
By Tom Carrozza

A Rockville Centre woman is facing backlash from several religious leaders, residents and elected officials after she told the village board at its meeting on April 4 that it should prohibit new houses of worship in residential zones, in what was interpreted by many as an antisemitic request.

The woman, who identified herself as Michelle Zangari, said she was inspired to speak after she was made aware of a Rockville Centre home with a large menorah on its front lawn that she estimated to be eight feet tall. Having grown up in Cedarhurst — a part of the Five Towns that has a large Orthodox Jewish population — Zangari said that the display of a menorah this far from Hanukkah typically represents a residential synagogue.

But the home is actually the Chabad of Rockville Centre, and the menorah there represents a Hasidic movement known for its outreach activities, mostly among secularized Jews. The Chabad’s rabbi, Mendel Gurkov, and his wife, Rivka, moved to Rockville Centre last October.

Zangari said at the end of the board meeting’s public comment period that she had lived in the Five Towns for almost 20 years, and that it had changed when Orthodox Jewish communities moved in and turned residential homes into synagogues. She told the board that she was worried about a larger Orthodox community coming to the neighborhood, and feared that if that were to happen, the new residents might ask that businesses close on Saturdays, take up seats on the school board, redirect funds away from the public schools and end up selling the schools “to the highest bidder.”

“You may think it could never happen here, but trust me, none of us living in the Five Towns thought it could happen there, either,” Zangari said.

Zangari is the owner of MZ Interior Design, a boutique firm in the village. In February she joined the board of directors of the nonprofit women’s shelter Bethany House, in Baldwin. On Tuesday, Bethany House told the Herald that Zangari is no longer with the shelter in any capacity. A formal announcement was planned for Tuesday afternoon after press time.

In the days after the meeting, Zangari’s comments were discussed by residents and officials from Long Island to Westchester County to Albany, and spread quickly among the Five Towns Jewish community. Asher Mansdorf, vice president of the Lawrence Board of Education, shared his thoughts on the 5 Towns Central YouTube page on Monday.

“If you ask your village board to deny any petitions for new houses of worship with the explicit purpose of preventing Orthodox Jews from potentially purchasing homes in a free market, you’re an antisemite,” Mansdorf said. He concluded his message by inviting Zangari to a Passover Seder in the Five Towns.

Bruce Blakeman, the first Jewish Nassau County executive, released a statement late last week. “Freedom to practice religion and freedom to live where one chooses are rights guaranteed by the Constitution,” Blakeman said in the release. “The remarks made by the resident at a recent Rockville Centre village board meeting were offensive and un-American. It is the duty of the responsive public officials to condemn the type of antisemitic hate speech that was in evidence at the Rockville Centre village board meeting.”

State Sen. Todd Kaminsky, whose office is around the corner from Rockville Centre Village Hall, condemned Zangari’s comments on Twitter on Sunday. “This was anti-Semitism, full-stop,” Kaminsky wrote. “The trope of ‘Jews taking over’ has been a hallmark of white supremacy for ages. RVC has a history of tolerance that welcomes all. Stand up for what’s right and call this out loudly. No place for hate.”

Many other officials, including Gov. Kathy Hochul and U.S. Rep. Tom Suozzi, made similar statements on Twitter.

Zangari wrote a letter of apology to Rabbi Gurkov and his wife.

“I think that what was said was misinformation, it was unfortunate, but I think we’re moving past it,” Gurkov said in response.

He added, however, that he found it unsettling that Zangari aired her opinion publicly.

“That was one of the issues that was disturbing, for the fact that a private resident was spoken about in a public way and it was put out into the open,” Gurkov said. “It caused a lot of distress and grief, because it is a private residence and not a synagogue.”

After the Gurkovs’ address was revealed, residents began showing up at their home, many with supportive messages, but it was still a lot for the family to deal with. Gurkov stressed the need for better communication in the future, noting that if Zangari had contacted his family, they could have explained their situation before things escalated.

Mayor Francis Murray and the village board released a statement on Monday morning in response to the controversy. “Rockville Centre remains a welcoming, caring and inclusive community that embraces all members of our village,” it read. “As an elected board, part of our responsibility is to provide an open forum for all residents. We will not let divisive rhetoric of any kind define us; we embrace understanding and acceptance of all.”

Gurkov said he was disappointed with the village’s statement because it was vague, but added that he was scheduled to meet with the mayor on Tuesday morning, as the Herald went to press.

“The statement is also disconcerting,” Gurkov said. “I don’t think it addresses all the facts, and I think it’s a very weak statement.” The rabbi said he hoped that a day of unity would be scheduled to help better inform residents and prevent controversy in the future.