At Regrown Recordings, giving local artists a chance to step up 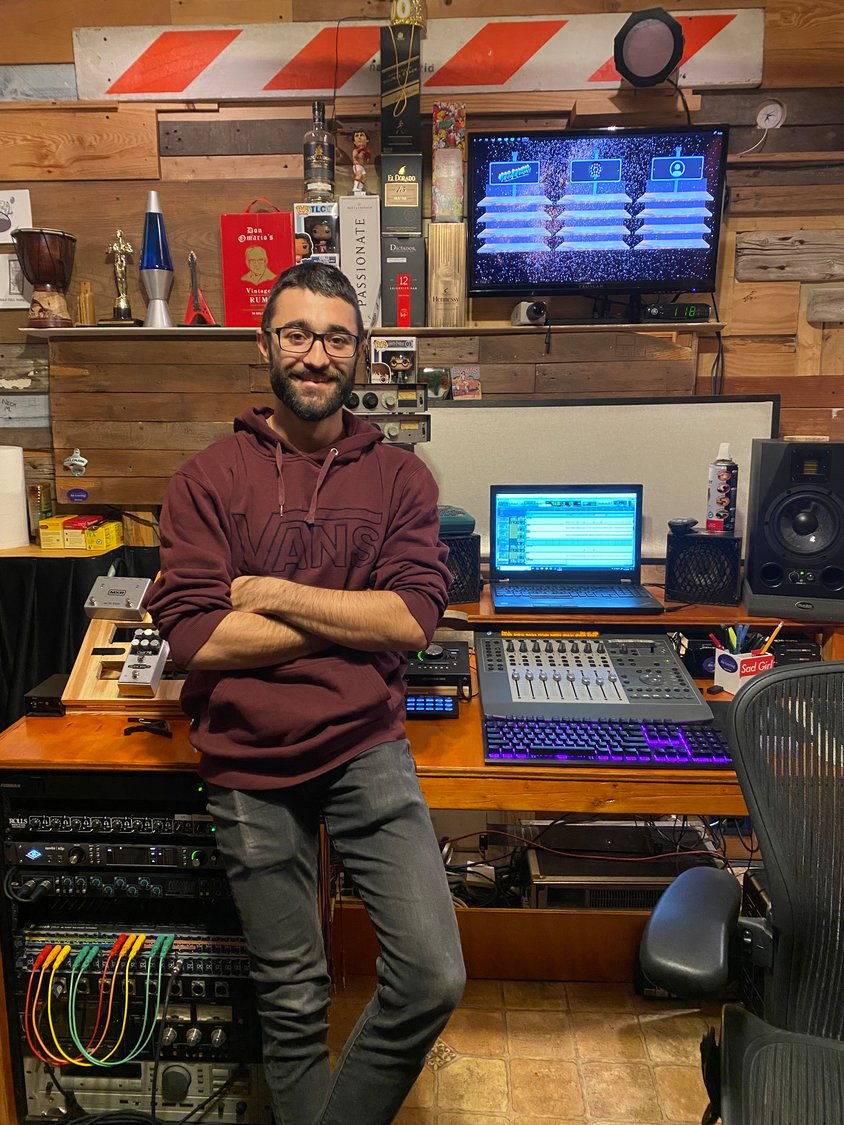 In a repurposed home on Hayes Street, near Baldwin Harbor Park, Matt Barba, the owner of Regrown Recordings, is quietly contributing to the Nassau County recording and music scene.

Barba opened the studio in July 2019, in his parents’ old house. Since then he has helped Long Island artists record music, podcasts and other audio work.

“I know what it takes to run a professional studio,” Barba said. “I wanted to take that and distill it into a small home studio where local artists can afford high-quality service.”

Most recently, Barba, 26, a 2014 graduate of Baldwin High School who now lives in Queens, worked with two local artists, Andrew “FancyCat” Fonseca and Jill Bellovin, on new albums. Bellovin, who graduated from Baldwin High in 2013 and is a co-founder of Universe City NYC, an aquaculture farm based in Brooklyn, said she met Barba in the high school band program, and they reconnected in 2019, when she heard that he had opened a studio. She book timed with him in 2019, and recorded a two-song project called Stargazers, and an alternative rock and folk album, “Turn to Light” in June 2020.

Barba helped bring her vision to life, Bellovin said, and was professional and attentive. Her album is set to be released in February, independently on streaming platforms, under the stage name Jill B. Lovin.

“Growing up, there weren’t many creative outlets around in Baldwin,” Bellovin said. “So I was really excited to support a local recording studio and produce my music with him.”

Fonseca, another local musician, said he has been working with Barba for about a year. Despite the sadness he expresses in his music, Fonseca said, he had a lot of fun with Barba while they were recording.

“Matt Barba is great,” Fonseca said. “He’s good on the fly, he’s got a well-rounded array of instruments and very useful software. Working with him has been a pleasure.”

Fonseca said he met Barba at the Baldwin Public Library during the coronavirus pandemic, when Barba was hired by the library to record local artists in live sets at his studio, which aired on the library’s Facebook page. Fonseca said that after speaking with Barba briefly, he realized he wanted to work with him.

“He’s built a nice, cozy studio right here in Baldwin, which I would’ve never known was there,” Fonseca said. “But I’m glad I know it’s there now.”

Aside from musical recordings, Barba also hosts the Sarutobi Sports Podcast in the newest expansion of his studio, the podcast room. Initially, he said, he hosted the podcast in his main recording room, setting up folding tables. But when the podcasters, John Mootoo and Mylz Wilson, of Baldwin, and Justin Thomas, of New Rochelle, wanted to work with him on a regular basis, he decided to expand his studio into an unused room.

Barba grew up in the Hayes Street home with his siblings, Nick and Danielle. It was ravaged by Hurricane Sandy in 2012, but since then his family has renovated it and raised it about four feet. His parents still live there, but they let him turn the first floor into a studio.

He built it on a budget, he said, which forced him to be creative with its design. He was inspired to build with recycled and “upcycled” materials, which in turn inspired the name Regrown Recordings.

In 2019 he started driving around Baldwin, collecting discarded materials, and posted alerts on social media, asking for recycled or waste materials. He built two desks, one for the main recording room and another for the podcast room, out of recycled finished plywood. On of the walls in the recording room was fashioned from random pieces of wood. He learned woodworking and construction skills from his father, who’s also named Matt, which, the younger Matt said, came in handy.

“I’ve always had the DIY mentality,” he said. “I had the tools and the skills, so I did it myself.”

In July 2019, he said, he began advertising, and opened the studio to local artists. “I really wanted this place to be a place where I can pursue my passion and hone my craft, while acting as a haven for local artists in Nassau County,” he said.

Barba has known his whole life, he said, that he wanted to work in music. “I’ve been a musician my whole life,” he said, having learned instruments like trombone in elementary school, and guitar at Baldwin Middle School. “Creating music isn’t an option for me. I need to do it to feel fulfilled and be happy. As much as I love making my own music, I realized the joy in my life is helping others create theirs.”

When he played Guitar Hero on his Play Station 2 in fifth grade, he recalled, he was inspired to discover new music. “It introduced a generation of kids around my age to all the guitarists and musicians that our parents listened to,” he said. “I know it helped me to want too play instruments and dive into the world of music.”

After he graduated from high school, Barba studied music business at Syracuse University, graduating in 2018. He said his experience there inspired him to learn audio engineering and recording. In college, he said, “I spent a lot of that time experimenting and trying to figure out the best ways to record music. Being in a music school, I had a lot of friends, and budding artists, who were looking to record things.”

Although there was a recording studio on campus, Barba explained, it tended to be full of students doing work for classes. So he and his friends produced live DIY shows in his apartment off campus.

“I was doing whatever I could to get my hands in the audio recording world,” he said.

In the summer of 2014, he interned as a sound engineer at Cove City Sound Studios in Glen Cove. The following year, he began another internship, at Full Stack Production NY, a Brooklyn-based live event production company that he now owns. He joined the company, he said, to learn live production as a stagehand and audio engineer, which he did for seven years. In 2018, when the owner retired, Barba was asked to take over the company.

In 2016, he had spent a semester of his junior year at Syracuse studying music recording at Jingle Punks and Perfect Sound Studios in California. There, he said, he had the chance to work alongside artists like T Pain and 21 Savage, which heightened his desire to be a sound engineer.

“That was an eye-opening experience, and I was really working at a different level, Barba said. “This made me realize I could record music at a professional level.”