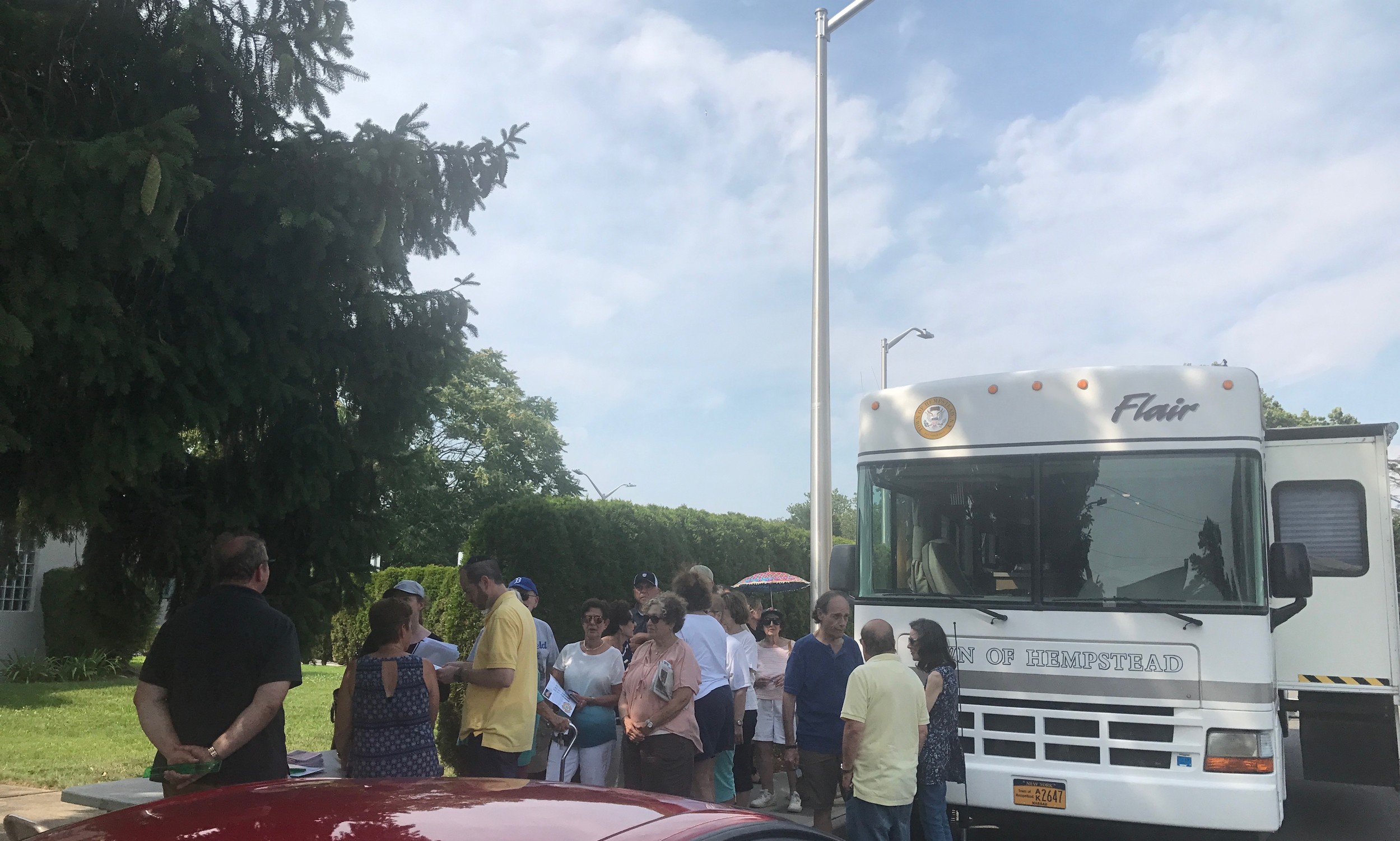 A majority of the nearly two-dozen residents at a July 20 Town of Hempstead mobile town hall meeting voiced their concerns to officials about the possible development of the Woodmere Club in the parking lot where Franklin Avenue meets East Broadway.

A majority of the nearly two-dozen residents at a July 20 Town of Hempstead mobile town hall meeting voiced their concerns to officials about the possible development of the Woodmere Club in the parking lot where Franklin Avenue meets East Broadway.

Residents of Garden Town, the apartment complex near the parking field, said they hoped the town could help mitigate drainage problems that cause their basements and parking lots to flood during heavy rainfall. However, the Woodmere Club overwhelmed any other issues raised.

Weiss Properties and 2020 Acquisitions purchased the private 109-year-old club, which includes an 18-hole golf course, tennis courts, pool and member dining, in April. Troon Management, a company based in Chicago, will oversee club operations for the next five years until Weiss and 2020 can pay off its debts, which amount to more than $5.1 million.

In a June news release Robert Weiss, president Weiss properties, said, “We are excited about being part of this community — providing value for the Woodmere’s current membership and drawing additional golf enthusiasts — while we develop our plans to introduce new in-demand luxury housing to benefit the neighborhood.” No development plans have been made public.

Concerned community members formed the Five Towns Civic Association nearly a year ago in response to the potential development. As of press time, 1,220 people had commented on the online petition that building more homes in a densely populated area with high traffic would strain existing resources and infrastructure. In addition, group officials noted that an influx of people could make emergency evacuation routes overcrowded.

The group has been vocal, attending events, placing lawn signs along primary streets in the area and preparing for legal action by raising money to retain an attorney. “We’re going to fight this through legal means, political means and through grass-roots efforts,” Saffra said.

The Rev. J. Christopher Ballard, of Trinity-St. John’s Episcopal Church in Hewlett, said he also believed more people would exacerbate traffic problems. “I’ll sit and watch a funeral [procession] take 40 minutes to try to take a left-hand turn into my cemetery as people are crying over their dead relatives. That’s atrocious,” he said. The church is on Broadway, a road with one lane in either direction.

Ballard also believes that the environmental impact of the development has been understated. “We had several beaches a couple of weeks ago close [on the South Shore] because they were too toxic to swim in,” he said. If we do a development the runoff into the bay, whether it be pesticides, fertilizers or whatever, is going to be enormous. No one [knows] what that impact will be, and that’s really, really important. This is one of the most beautiful places to live, and this would just put more stress on the environment.”

Jack Bruger, a Cedarhurst resident who lives next to the club, is also concerned. “In the morning, I see flocks of Canadian geese, and they come down on the course, it’s a refuge. They’re going kill all these birds. There were wild turkeys on my house from the golf course. If they develop that they’re going to kill all of them, get rid of their habitat, and that’s that.”

Aides for Town Councilman Anthony D’Esposito, who did not attend, listened and took notes.

The town has hired an engineer to study the impact a development would have, ranging from traffic to possible ecological effects. “We want to work with the community, work with the engineers and work with the developers,” D’Esposito said in a telephone interview.

A letter signed by D’Esposito and Town Supervisor Anthony Santino was given to residents. It thanked them for their concern and support of a 180-day temporary building moratorium on residential development on privately owned golf courses that the town board approved last November. While most residents want to extend the ban indefinitely, the town can extend it in 90-day increments with a majority vote.

The councilman said he would vote in favor of extending the moratorium at the town’s Aug. 8 meeting and expects it to pass.

The councilman added that the town has been in contact with community members, but communication with the developers is lacking. “We’re doing everything we can legally do to protect our residents from overdevelopment of the area,” he said.

A dense housing development on the club’s land is the least favorable option, according to many residents, and some in the community have another vision. “I think it would be really wonderful if it would become a park,” Ballard said. “That, however, takes money to manage and maintain, but you know what? It would be a really cool park, and it would be a great service to the people of Five Towns.”

Another mobile town hall is scheduled for July 30, from 11 a.m. to 1 p.m., in parking field W3 at Irving Place and Central Avenue in Woodmere.

Have an opinion about the Woodmere Club situation? Send your letter to the editor to jbessen@liherald.com.