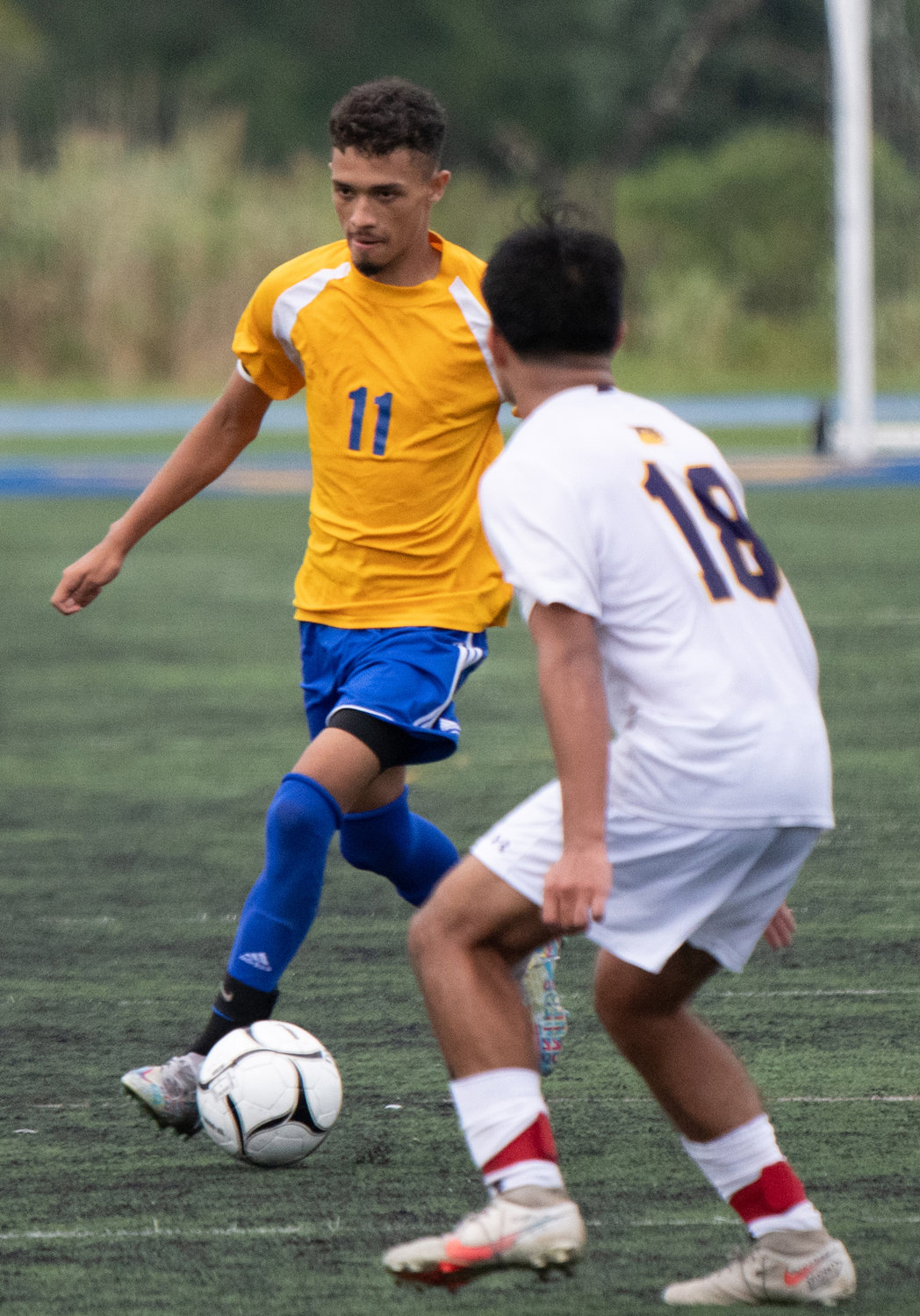 Angelo Puerto-Quintanilla (24 goals, 14 assists) has been dynamic all season for Lawrence, which seeks a deep run in the Nassau Class A playoffs.
Media Origin Inc./Herald
By Tony Bellissimo

With Lawrence boys’ soccer boasting Nassau County’s top two scorers, no lead appears safe against the Golden Tornadoes — not even a two-goal cushion for an opponent which had yet to be defeated.
Seniors Angelo Puerto-Quintanilla and Gabe Viera sparked a wild comeback victory for Lawrence last Friday as it handed North Shore its first loss while earning a share of the Conference A-V title. Both teams finished the regular season with identical 11-1 marks.
“We responded the way I thought we’d respond, but it’s not like we were in this situation before so you never know,” Lawrence coach Pat Leary said after the game. “Angelo and Gabe are high-level talents. I’ve been coaching a long time and can’t remember anyone in the county having two 20-goal guys at the same time. They each have more goals than some teams.”
The Vikings, who beat Lawrence 2-0 on Sept. 25, led the rematch 2-0 after 24 minutes thanks to goals by Matteo Kanakaris and Luke DiBenedetto. However, the hosts pulled even by halftime — Puerto-Quintanilla converted a penalty kick and Viera set up senior Jona Murcia — and sophomore goalkeeper Julio Murcia, making his first varsity start following a call-up from JV kept North Shore from doing any additional damage and finished with nine saves.
“He was tremendous,” Leary said of Julio Murcia. “He didn’t look nervous and he really made some difficult saves.”


The winning goal — Puerto-Quintanilla’s 24th of the season — came with just under 25 minutes remaining. He then assisted Viera’s insurance tally with a long ball over the defense with less than five minutes to go. It was Viera’s 21st goal.
“We scored 63 goals in 12 games,” Leary said. “I don’t believe we’ve ever come anywhere close to that number.
“They’re all unselfish and humble kids and it doesn’t matter to them who gets credit,” he added. “They just want to win.”
Puerto-Quintanilla and Viera are tied for the team lead with 14 assists. Their supporting cast runs deep. The Golden Tornadoes have five others with multiple goals, including Jona Murcia and sophomore Jonathan Valiente Rodas with four apiece, and senior Jessi Vasquez with three.
In its three games prior to last Friday, Lawrence totaled 20 goals in victories over Friends Academy, Seaford and Clarke. Viera registered 10 points during the stretch, including a second four-goal performance against Seaford this fall. Puerto-Quintanilla had a hat trick versus Clarke.
On the flip side, Lawrence allowed only 13 goals in conference play with seniors Frank Echeverria, Cesar Revolorio and Franklin Arriega, along with junior Richie Moran spearheading the defense. Senior keeper Justin Lewis has 61 saves and 10 wins. In addition, Leary lauded the rock-solid play of senior Jose Sandoval at center-midfield.
The Nassau Class A playoffs begin this week with a couple of play-in games, leading up to Friday’s first round which has Lawrence, the No. 8 seed in the 18-team bracket, hosting No. 9 Manhasset at 3 p.m. The winner will likely get top-seeded South Side in the quarterfinals on Oct. 26.