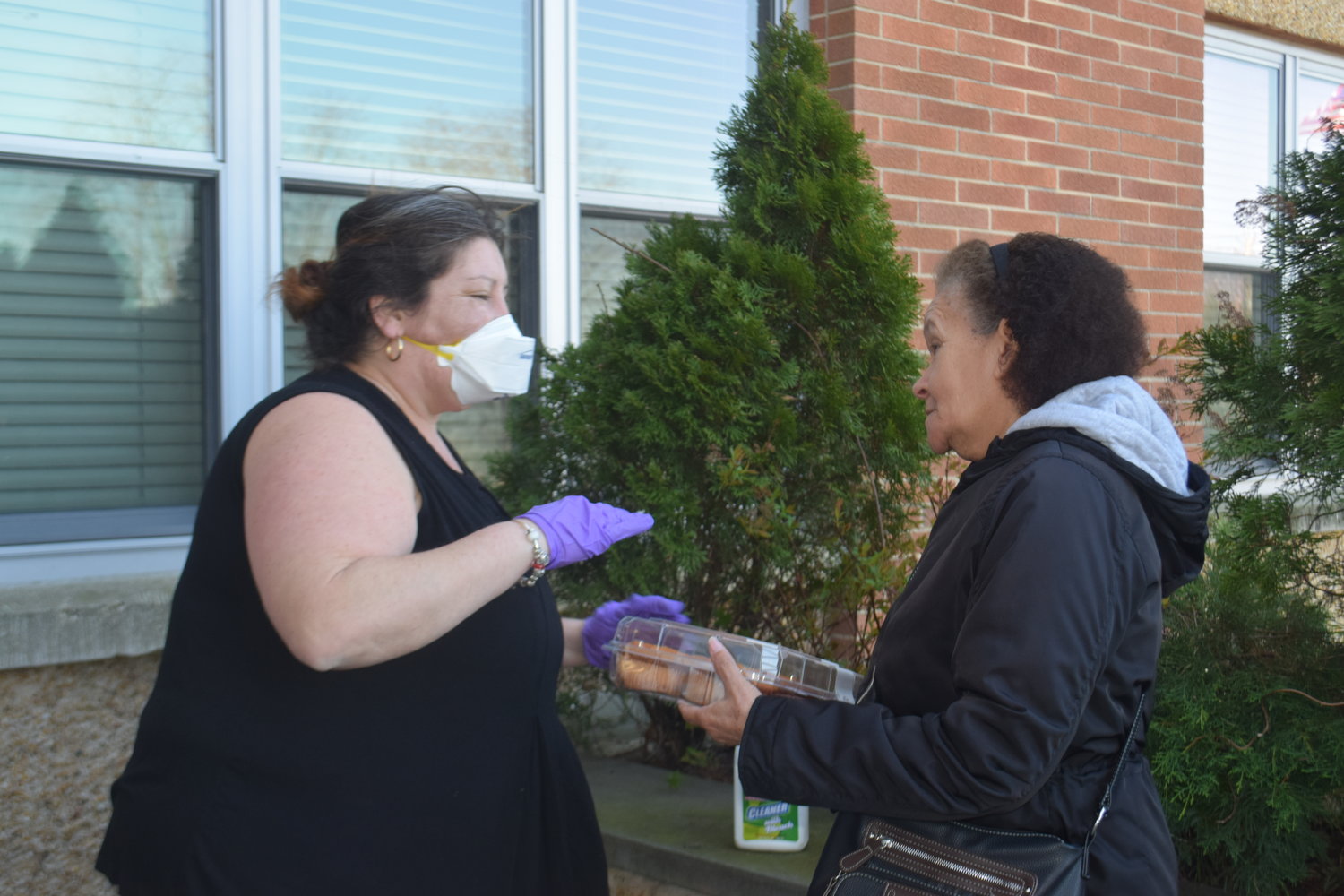 With rubber gloves on her hands and a facemask wrapped around her nose and mouth, Inwood resident Sasha Young handed out bleach, dish detergent and muffins to Five Towns residents, along with a diced pineapple snack cup, if they came with children, at the Community Center on Lawrence Avenue in Lawrence on March 27.

Later on, the same Friday, Young and possibly others distributed what was described as a “limited supply of yummy sandwiches,” by Young in a Facebook group post, along with bread and bagels and a bleach-based cleaner.  All the time walking outside to hand out the items.

The cleaning supplies are what remain from the center’s Hurricane Sandy supply and the food items are coming from donations distributed by Cedarhurst-based Rock and Wrap It Up! run by Syd Mandelbaum and his wife, Diane. Other food was donated by Atlantic Beach resident Richard Brodsky and the sandwiches from an Atlantic Beach woman whose husband has a Boars Head route. Young noted she declines to be identified.

“We have to band together or there is no way we will survive this,” Young said about the coronavirus outbreak, in between people coming to the center on that Friday morning.

Brent Hill, the center’s new executive director, who took the reins in November, roughly the same time coronavirus was beginning to take root in China, calmly listed the items the center has to offer, including approved masks, goggles and rubber gloves. He previously directed a Philadelphia-area YMCA from 2013 to 2018.

“We are proud that our service and programs are up and running,” Hill said, noting that the program that counsels substance abusers is serving patients using telehealth video conferencing. The Head Start educational program that serves 76 children from one- to 4-years-old is also using the internet to get activities and learning opportunities to parents of the students, who are mostly Five Towns residents.

Youth counseling for adolescents, the bilingual program, English language classes and the lessons for the citizenship test are all beginning to get up to speed, Hill said. The largest problem remains making sure everyone has enough to eat, he added. “People don’t know what a problem food insecurity is,” Hill said.

Through Rock and Wrap it Up!, Mandelbaum is trying to reduce the problem substantially. The anti-poverty think tank is piloting a pre-Passover food collection.

“This year more than any other in recent memory the at-risk population is in dire shape,” he wrote in an email. “We are collecting chometz to be given out at the Five Towns Community Center to the entire community. The JCC will be closed but many of their clients are not observant and need food during Passover.”

Chometz is food and other items deemed not kosher for the eight-day Jewish holiday that is always thrown out and replaced by food and items kosher for Passover.

Gural JCC Associate Executive Director Stacey Feldman said that  the Rina Shkolnik Kosher Food Pantry at its SHOP in Cedarhurst will be closed during Passover. Kosher for Passover perishable and nonperishable items will be available at 207 Grove Ave. in Cedarhurst.

"We have taken great lengths to contact all of our clients to arrange food for them in March, food for Passover and for April." she said.