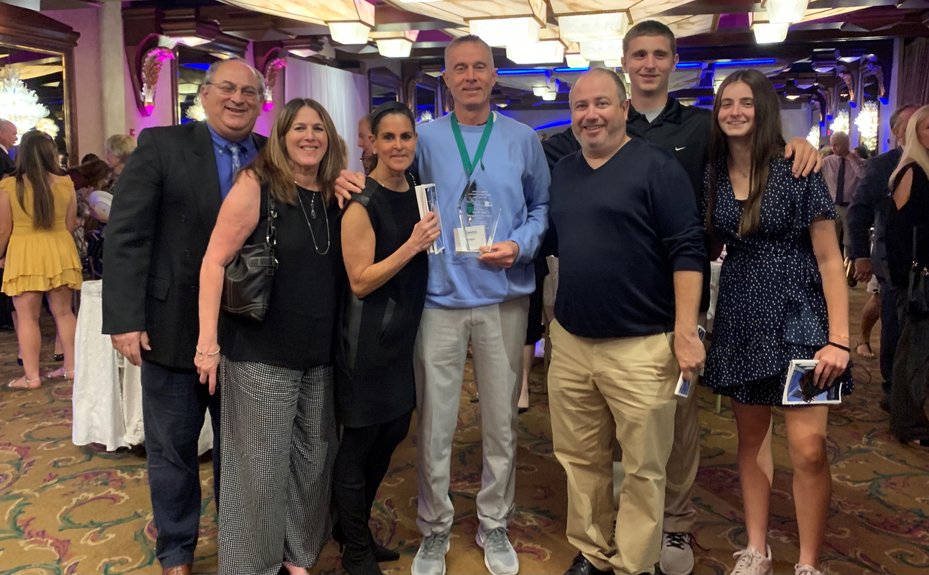 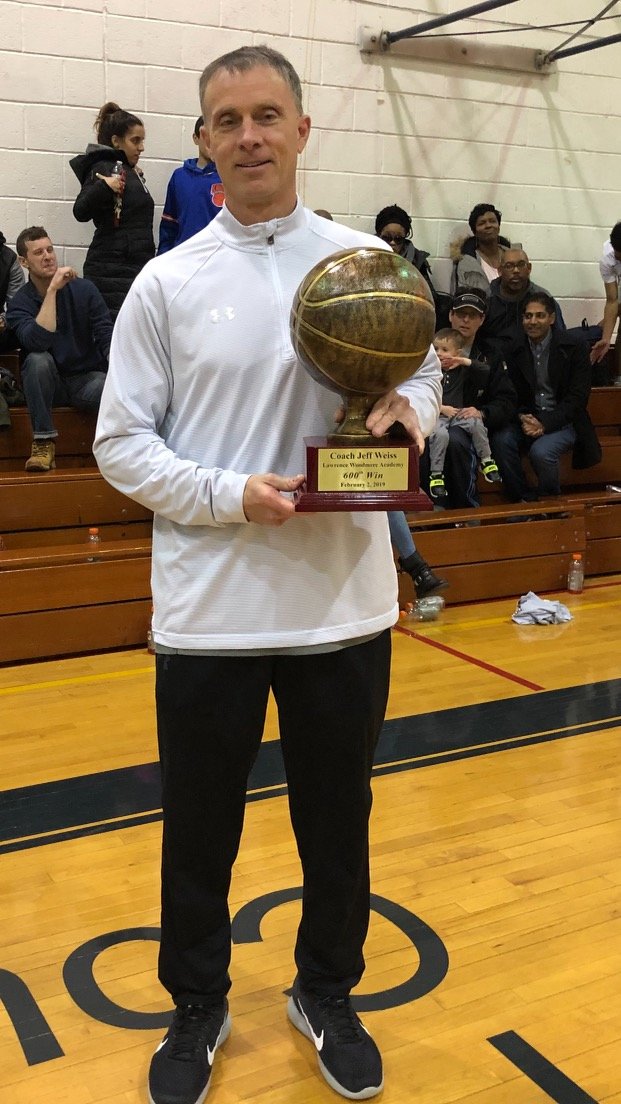 Jeff Weiss after his 600th career win in February 2019, on the court at Lawrence Woodmere Academy that bears his name.
Courtesy Jeff Weiss 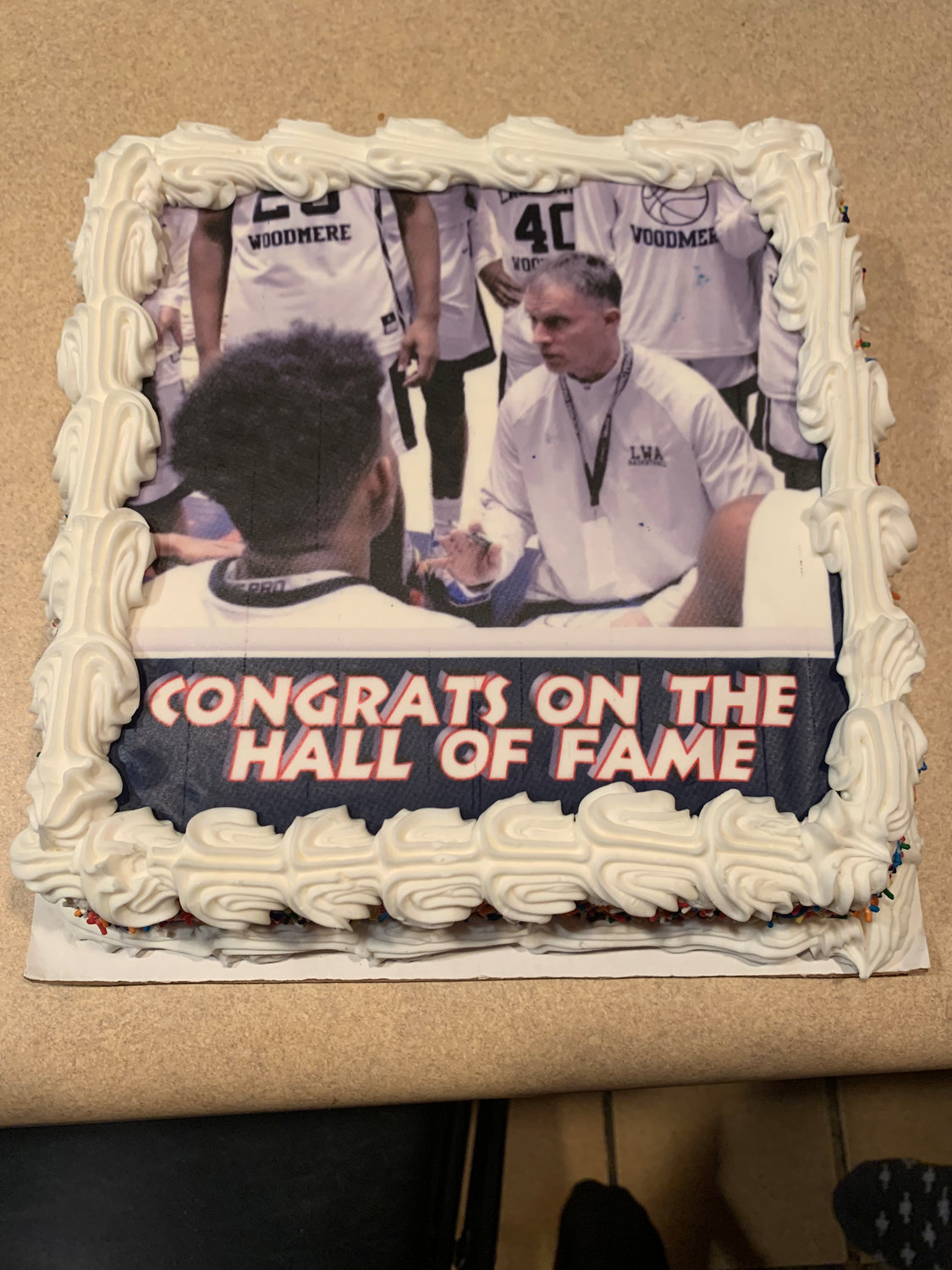 Being inducted into the Nassau County Athletics Hall of Fame was just icing on the cake baked by Weiss’s wife, Andrea.
Courtesy Jeff Weiss
Previous Next
Coach Jeff Weiss’s achievements

If you listed all of Jeff Weiss’s achievements in the 32 years he coached boys’ varsity basketball at Lawrence Woodmere Academy, it would read exactly like the resume you would expect from someone inducted into the Nassau County High School Athletics Hall of Fame, as Weiss was on Sept. 29.

The accomplishments are staggering (see box, Page 3). But the true measure of Weiss’s success are the enduring relationships he formed with players and the positive impact he had on their young lives.

“He’s always a Coach with a capital C,” said Keith Cacciola, who was a senior co-captain and the starting point guard on Weiss’s first league championship team in 1994-95. “To this day, his opinion of me matters. Every single day I try to lead a life that Coach would be proud of. What he taught me had a major impact on me, and I can’t overstate that. I’m one of dozens or hundreds of players who had a similar experience.”

Cacciola, who grew up in Rockville Centre, noted LWA’s no-cut policy and said that he might not have made or been a starter on his hometown’s public high school team, but Weiss gave him an opportunity to develop and as a player and a person.

“I’m 5-8 and I played college basketball,” Cacciola said. “I have heart and I don’t back down. That is a recipe for success.” He was named All-Conference as an LWA senior, and played Division III basketball at Bates College in Maine.

Weiss, 60, a lifelong Five Towns resident, graduated from Hewlett High School and coached there, guiding the 1988 boys’ soccer team to a state title and coaching junior varsity basketball as well.

“You could never predict 30-plus years, never know how long it will last,” he said, reflecting on his coaching career. “It was a great ride. I didn’t ever foresee 30-plus years. I was so fortunate. Had great kids and great teams.” He was also LWA’s athletic director during those years.

For two-thirds of Weiss’s career at LWA — it was Woodmere Academy until 1990, when the school merged with Lawrence Country Day School to form Lawrence Woodmere Academy — John Schandler, who nominated Weiss for the Hall of Fame, was his assistant coach.

From 2003 to 2012 it was a paid gig for Schandler, but at that point he left LWA, and from then until Weiss retired at the end of the Covid-truncated 2019-20 season, Schandler volunteered. He was also a player on the 1991-92 and 1992-93 teams, which he said gives him a unique perspective on Weiss. “He pushed us to work really hard,” Schandler said. “I was not an elite athlete.”

His seasons coincided with years when LWA was not yet what Schandler called “an athletic destination.” “It was the way he won, the relationships he formed,” he said of Weiss. “He scheduled very tough games. He pushed, searching for the best team from the city, Long Island, public school, Catholic schools, never afraid of a challenge. He’s been to countless weddings, knows his former players’ children.”

“Remember, if you have your health, life is what you make it,” and “There are escalator people and there are stairs people,” are two Weiss maxims that Cacciola said stick with him to this day as a 44-year-old father of twins. “There are no shortcuts, and if your best player isn’t the hardest worker, your team won’t be successful,” he said, recalling Weiss’s coaching style and his approach to life, in which he aims to break a sweat every day.

A nearly 46-minute video put together by Cacciola and other members of what is called the LWA Hoop Squad Fraternity paid homage to Weiss’s influence on his former players.

Karim Shabazz, a 7-foot-2 center, was LWA’s first big-time recruit, and subsequently taught kindergarten through fourth grade as well as middle school at LWA from 2014 to 2020, and coached the girls’ basketball team for a few seasons.

“Coming into your office was a safe space where we could laugh and joke,” Shabazz said in the video, talking to Weiss by way of the camera. “You would teach us about life, to be successful and how to do things the right way.”

Francis Jonathan Han, class of 2004, recalled the multiple league championships and a state title. “You’re one of the best coaches I ever had,” Han said in the video. “People know you for a reason. You’re a winner, and you changed a lot of people’s lives, and Lawrence Woodmere is on the map forever, because of what you’ve done for school.” Han is a point guard who most recently played for Mets de Guaynbo in Puerto Rico.

“We’re the better team. Don’t make them out to be better than they are, and don’t underestimate yourselves. I mean that sincerely. I know that I’m the better coach than their coach, and I know that you’re better players than their players. I know that. We don’t win today it’s an injustice.” LWA won 76-70.

That was the victory, Weiss said, that “pole-vaulted” LWA to another level and established the school as a consistent winner.

“It was my honor and privilege to coach, teach and mentor student athletes for 30-plus years,” said Weiss, whose name graces LWA’s basketball court. “So many of those young people I have close relationships with today. It’s those relationships that matter most. Special thanks to my wife, Andrea, my twins, Ryan and Riley, and coach John Schandler for their support along the journey.”