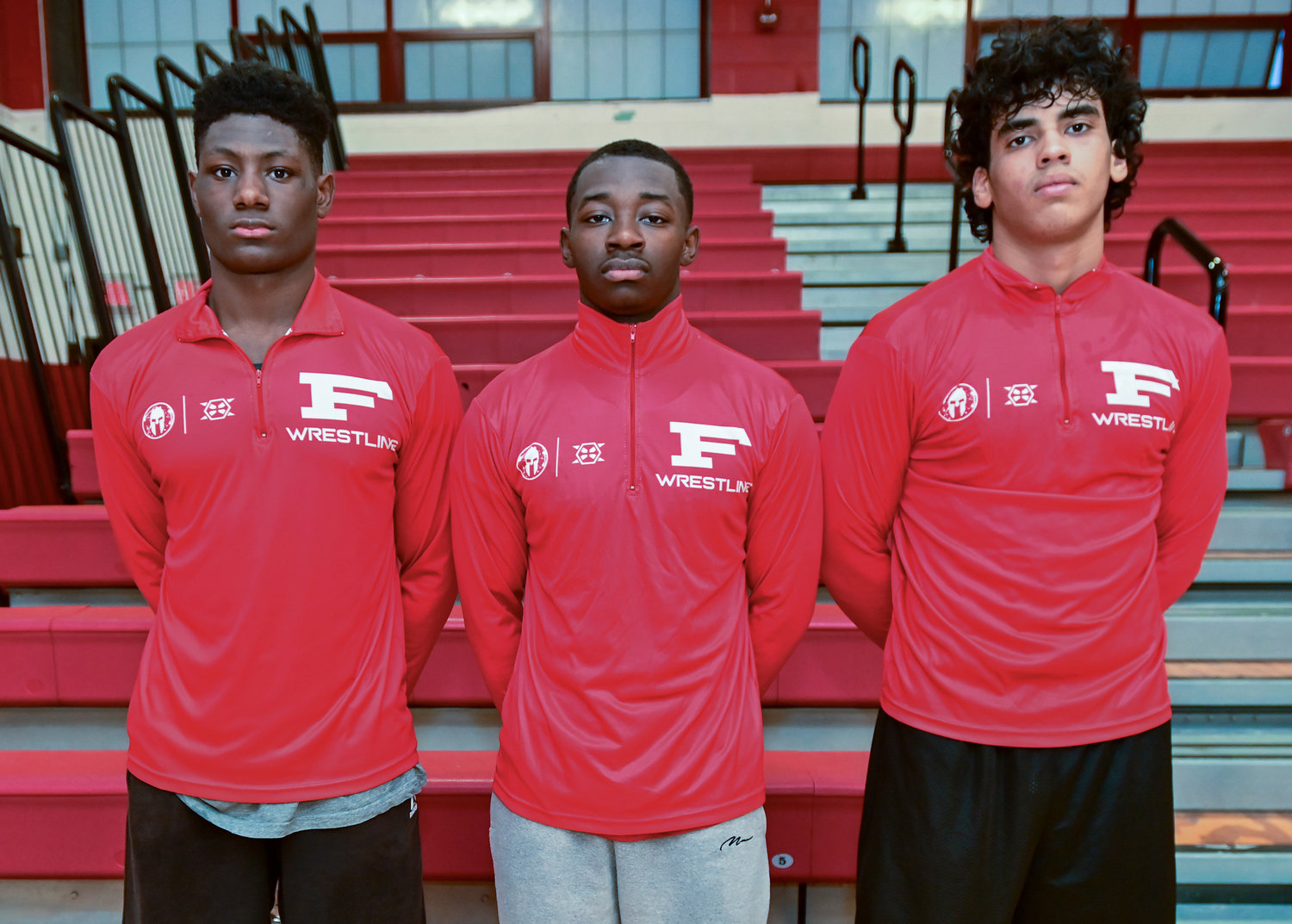 Captains, from left, Christian Greene, Amir Levi and Juan Ramos lead the Red Devils into the most important part of the season.
Justin Stefanelli/Herald
By Andrew Coen

The Freeport wrestling team faced a vicious opponent off the mat early in the season that left a young Red Devils team behind the eight mall while tackling a grueling dual meet schedule.

Freeport was left shorthanded in early season practices and matches with a number of wrestlers sidelined by either Covid-19 or the flu, but third-year head coach Matt Celan is hoping the viruses are now in the rear-view mirror as the team preps for county qualifiers.”

“The first three to four weeks, we had 15 to 20 kids out with Covid and the flu so it was insane, but that's all behind us and we haven't had much of that recently,” Cellan said. “We never really had a full lineup until this past week.”

The Red Devils tackled a rigorous dual meet schedule while being short handed including December matches against East Meadow and Syosset, which Cellan hopes prepares his team well to compete among the top wrestlers in the area. The county qualifiers are slated for Saturday, Feb. 4 and Freeport is part of the 9-team field at Hewlett High School.

Among the wrestlers that could make waves at qualifiers and earn All-County honors at the county championships at Hofstra is sophomore Jahari Lloyd, who has made strides at 110 pounds after competing at 102 last year. Lloyd has gotten strong competition at 110 from fellow sophomore Josh Cabrera, who qualified for counties last year as a freshman.

Cellan said senior Amir Levy could make some noise at 152 after posting some quality wins in January along with senior Henson Romero at 145. Senior Jose Flores is another potential All-County wrestler at 132 along with newcomer Christian Mccravey (102), who has amassed more than 20 wins as a seventh grader.

Juniors Juan Ramos and Christian Greene have made strides a 189 throughout the season and have a strong chance to reach the counties. Jordan Addison is looking to reach counties for a second straight season at 215 as a junior.

The Nassau County individual championships are scheduled for Feb. 11-12 at Hofstra University’s Mack Sports Complex marking the first time the event has been held in the arena since 2018. Freeport wrestlers who place in the top six will earn All-County honors.

Cellan said Lloyd and Levy likely have the best chance for a high finish at counties with both wrestling their best heading into the home stretch of the season. Levy is shining again after a breakthrough season as a first-year wrestler last season as junior while Lloyd is laying the groundwork for a bright future with two years remaining on the Freeport mats.

“He is always asking me to wrestle the team's best guy whether it be at his weight class or upper weight class,” said Cellan of Loyd. “He likes going up and challenging himself."