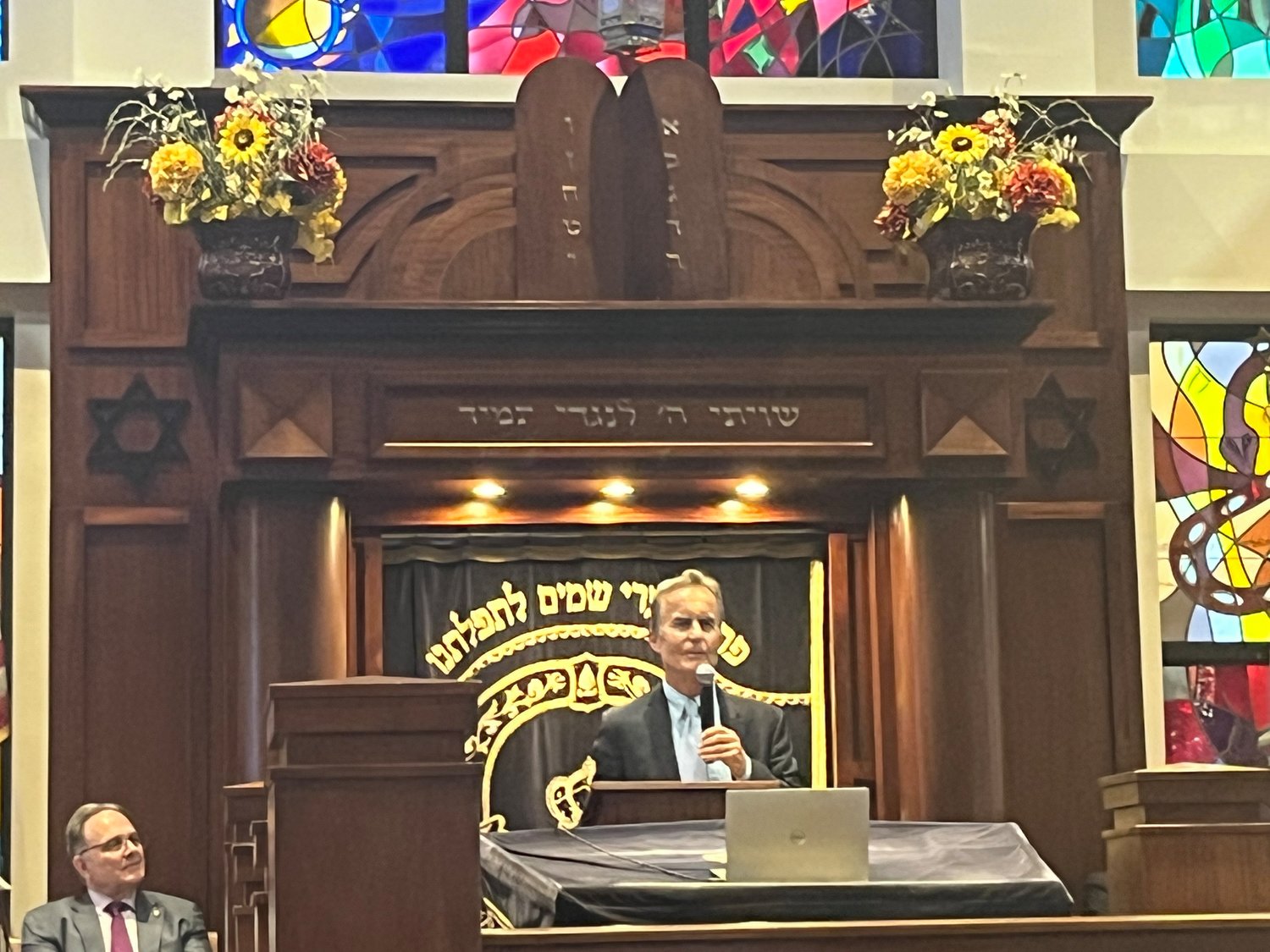 Dr. Bernd Wollschlaeger, a German who converted to Judaism, recounted his life to an audience of Young Israel of North Woodmere members on Holocaust Remembrance Day.

Yom HaShoah is a commemoration that Jews hold to pay tribute to the at least six million Holocaust victims through readings, musical selections and more. The day, April 28, is marked both in the United States and Israel.

At least 100 congregants filled Young Israel for this year’s event, where there were two opening acknowledgments by members Ben Rosenberg and Dr. Steve Yager, both sons of Holocaust survivors, and keynoter Wollschlaeger.

For more than 10 minutes, Rosenberg discussed personal experiences having witnessed and heard “the trauma experienced by my parents,” he said, “as well as the beauty of having survived.” He closed: “May we never have to go through anything like that again,” Rosenberg said.

Yager introduced Wollschlaeger. “Why are we here tonight: this person has a very unique and separate, distinct reason why they’re here,” Yager said, “and in all likelihood, your emotions will run very high on the subject.”

“Whenever I’m being invited to speak about or at an event commemorating the Holocaust, I get a little bit — I would say sick — physically sick,” Wollschlaeger said, “because I cannot claim to be the son of a survivor.”

He recounted his struggle growing up in Germany slowly uncovering who his father really was — a highly decorated World War II tank commander and Nazi officer.

As Wollschlaeger matured, his questions about his father’s experience in the war grew, and his father refused to talk about it. He explored these questions on his own through literature and speaking with Jews — eventually traveling to Israel where he found more answers.

Over the course of seven years, Wollschlaeger found himself on a spiritual journey which caused his father to forbid him from his childhood home and cease their relationship forever.

Despite the long-term turmoil that Wollschlaeger’s spiritual journey caused with his family, he ended up emigrating to Israel, where he converted to Judaism and served in the Israel Defense Forces as a medical officer.

Twenty years after leaving Germany, Wollshlaeger returned with his own children when they, too, had questions about his father — their grandfather. While in Germany, Wollshlaeger buried his sister and visited his parent's gravesites — his first encounter with them since he last saw them alive.

At the conclusion of Wollschlaeger’s recount, congregants gave a standing ovation and asked questions. His “story is compelling,” Rabbi Yehuda Septimus said, “and shows that in an age of too much identity politics that, sometimes, it’s actually about what’s true and what’s right.”

To learn more about Wollschlaeger, visit his website: http://bwollschlaeger.com/home/.