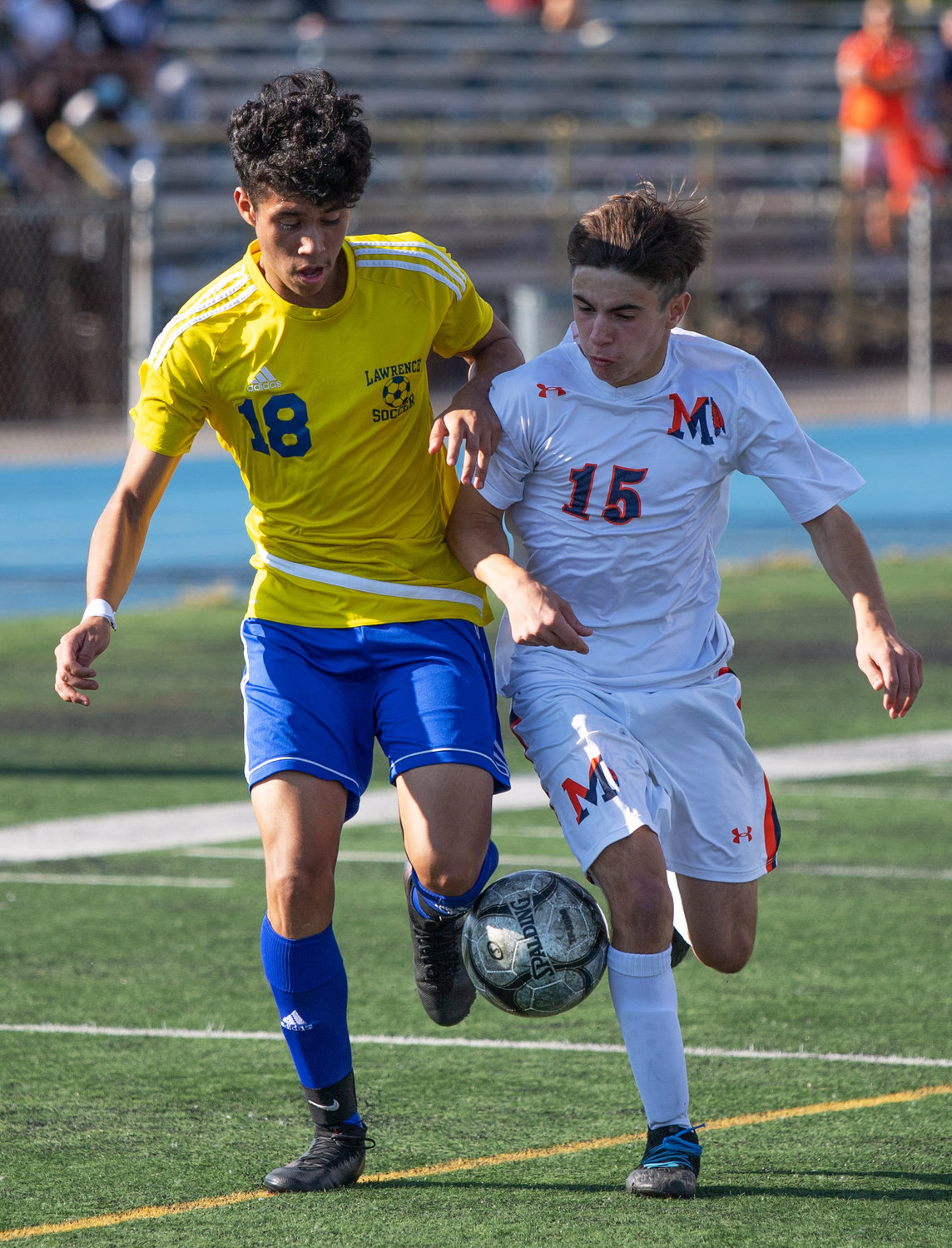 The Lawrence boys’ soccer team had its season end in heartbreaking fashion last Friday, as it lost 3-2 in overtime in a Nassau Class A first-round playoff matchup against visiting Manhasset.
Despite the unfortunate and premature ending to the season, Lawrence coach Patrick Leary had nothing but positives things to say about the way the team performed and the character the kids’ displayed throughout the year.
“I’m always going to be proud of these boys regardless of what happens,” Leary said. “They’re just fantastic kids. I want the world for them but today we fell short.”
Overtime was brief, as Manhasset scored on its first opportunity with just over two minutes expired. Senior Gianluca Bebber broke free on a counterattack, and he passed it right in front of the net for sophomore Gabriel Feldman to tap it in. It was an essentially a two-on-none, making it nearly impossible for Lewis to make a save and keep Lawrence’s season alive.
The game had a playoff atmosphere from the very beginning, as the bleachers were packed with passionate supporters to cheer for both sides.


Lawrence set the tempo early, as it had 5 shots on goal before Manhasset even registered a shot of their own. Lawrence was finally able to get on the scoreboard, when senior Angelo Puerto-Quintanilla was able to blast one past the keeper around 20 minutes into the first half.
It seemed this initial goal invoked a sense of urgency for Manhasset, as freshman Luka Busljeta was able to retaliate with a goal of his own a few minutes later, when he simply dribbled past the previously potent Lawrence defense.
Manhasset did have a penalty shot opportunity right before the half, but it couldn’t capitalize. Senior Scott Bayardelle barely missed his shot to the left of the goalpost, even though senior keeper Justin Lewis guessed correctly which side Bayardelle was going.
The score remained tied at 1-1 for the majority of the second half, even though both teams had ample chances. Manhasset senior Giancarlo Ciotoli had a header saved at point blank by Lewis. Puerto-Quintanilla and Gabe Viera also had a handful of shots on target, but impressive goalie work by Indians senior Chris Diskin kept the game tied.
Lawrence (11-2 overall) was able to finally break the tie when senior Franklin Arriega perfectly placed one in the top left corner from well beyond the box. Jessie Vasquez was credited with the assist for that play. The minuscule lead was short lived, as Scott Baryardelle tapped in a loose ball right in front of the goal to equalize minutes after. Manhasset almost won the game in regulation, but Lawrence defender Emerson Ayago was able to head the ball out of net on what would have been the game-winning goal. With the score locked at 2-2, the game headed into overtime.
After the game, Manhasset players demonstrated great sportsmanship, as after their initial celebration, many went and sat and comforted the naturally upset and exhausted Lawrence roster. It was evident that both sides had mutual respect for the opposition following a hard-fought postseason battle.