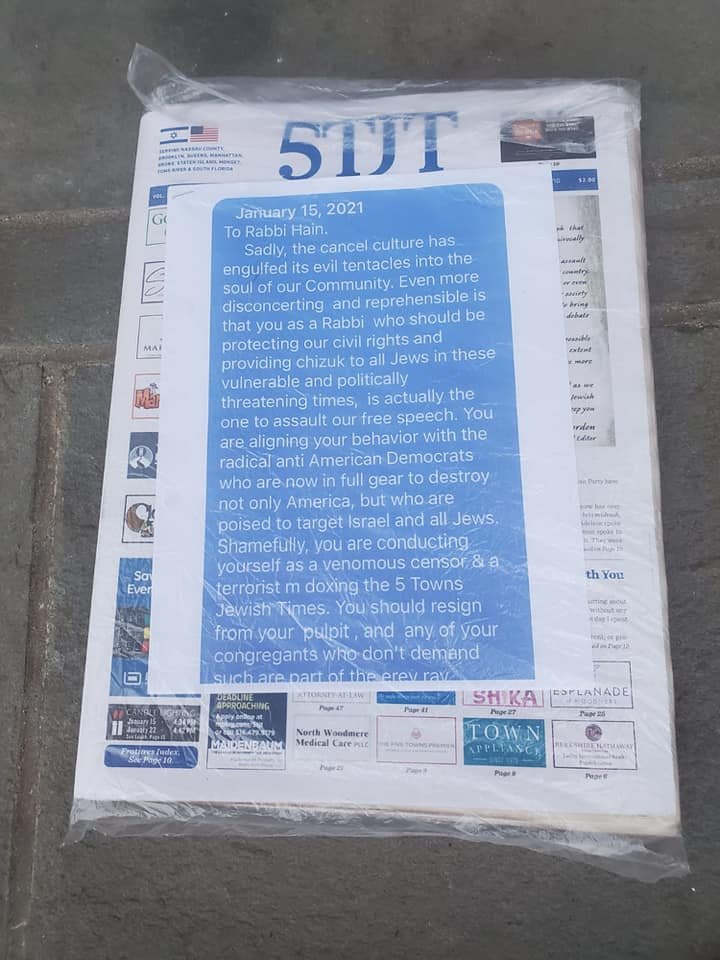 The threatening note and package of newspapers left outside Rabbi Kenneth Hain's Lawrence home on Jan. 15.
JADE
By Jeff Bessen

A threatening note slipped into a package of Five Towns Jewish Times newspapers that were left on the doorstep of Rabbi Kenneth Hain’s Lawrence home on Jan. 15 attacked Hain for “aligning your behavior with the radical anti-American Democrats,” and called for him to resign. The person or persons who wrote the note also claim that Hain protects people “who have spewed hatred towards all Jews, including yourself.”

This occurred a week after Congregation Beth Sholom in Lawrence that Hain leads was one of two synagogues in the Five Towns that sent letters to the Five Towns Jewish Times asking that the weekly Orthodox Jewish newspaper not be delivered to their shuls.

The person or persons who wrote and left the note also alluded to Five Towns Jewish Times publisher Larry Gordon’s apology and called the synagogue’s letter an attempt to ruin Gordon’s newspaper and his livelihood.

Hain, Rabbi Avi Miller, the synagogue’s president Barry Gurvitch and chairman of the board Alan Heller, signed a letter that stated the paper’s  front page photograph of Cedarhurst dentist Dr. Gila Jedwab in a celebratory pose outside on Capitol Hill in Washington, D.C, on Jan. 6, albeit before the assault on the building, was “irresponsible and reflects a disregard of our community’s values.”

Young Israel of Woodmere was the other synagogue that sent a letter to the Five Towns Jewish Times requesting that the paper not be delivered for the identical reason. “We strongly object to your posting of Gila Jedwab with her arms extended in a welcoming fashion during the despicable event in front of the nation's capital together with all its negative ramifications,” Young Israel stated in the letter signed by Stuart Wagner, president of the synagogue’s board.

Rebbetzin Nancy Hain, Hain’s wife, reported the incident to the Jewish Alliance for Dialogue, a private group that communicates to members on Whatsapp. “We will secure the photo and other info sent to the local Rabbi to give [to] police for follow up investigation,” Nancy Hain posted. “Will let you know when/if there is more. Thanks for the support & good wishes. This is being taken very seriously by the Shul, its security & us.”

It was reported by JADE group members that “The Hain family knows who delivered the package on Friday and it is being addressed internally.”

On Saturday a JADE member posted: “The Hain family would like to thank everyone who has reached out to them to show their support. There has been a tremendous outpouring from the community and the family is trying to make their way through all of them.”

This story will expanded and updated.