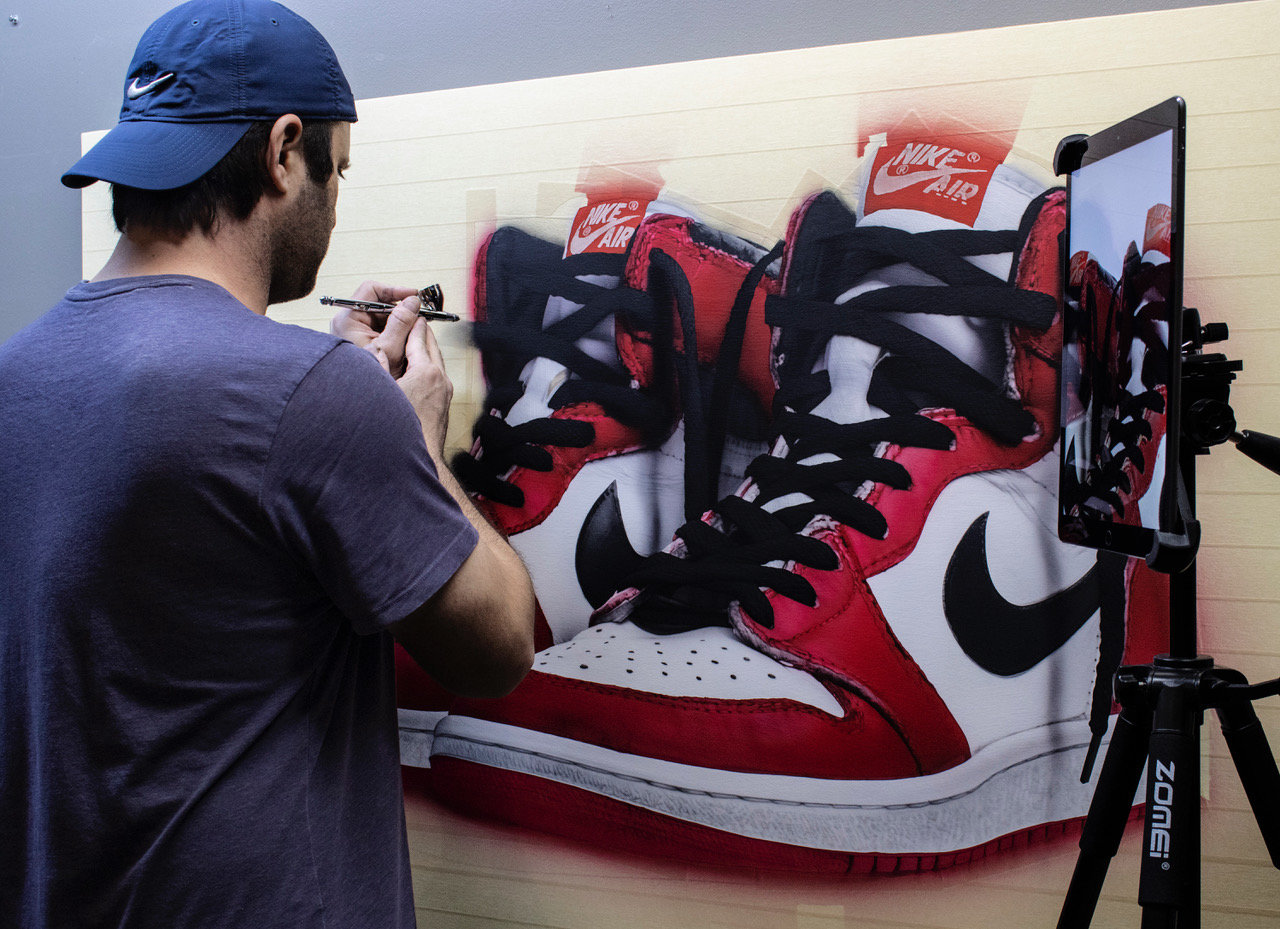 Adam Port, a native Five Towner, has made his long-time passion for sports and art into a successful career and hopes to donate 100 percent of the profits from his latest project to the Shaquille O’Neal foundation.

Port has been a professional artist for more than 20 years. He specializes in a photorealism style with a focus on sports and pop culture, using mediums such as colored pencil, graphite, acrylic paint, oil paint, and especially, airbrush.

Taken to a local craft show by his parents, he saw the airbrush technique for the first time and was amazed by the details that could be made by this medium. “He actually sat for a few hours at a booth of an artist airbrushing leather jackets,” said Port’s mother, Rona Port. “He watched his every move, taking in as much as he could from that man.”

Port was hooked. “I remember telling my parents I want that,” he said. “They took me to an art supplies store and bought me my first airbrush. From that moment on, I was pretty obsessed with it.” His mother remembers it was when Port as 10 or 11, Port said he was few years older.

A three-sport athlete at Hewlett High School, Port played soccer, basketball and baseball. Simultaneously, he took every art class that he could to immerse himself in different mediums.

He especially bonded with Nick Lacetera, an art teacher who then doubled as the soccer coach. “Early on, he saw my potential and we became really tight,” Port said.

It is a relationship that continues with Port occasionally demonstrating and speaking to Lacetera’s art classes. “He was very dedicated,” Lacetera recalled, “even back then, he knew he wanted to be a full-time artist, so he was just one of the hardest working.”

After graduating high school in 1996, Port studied illustration at Syracuse University’s school of Visual and Performing Arts. He incorporated sports into each of his classroom projects.

At that time, he asked a friend of his, Brian Appell, to take one of his school projects to a Knicks-Bulls game in hopes that Michael Jordan would see the painting and autograph the artwork.

Although that did not happen, it still worked out for Port. A National Basketball Association photographer saw the painting and chatted with Appell, which ultimately led to Port earning a prestigious licensing agreement with the NBA.

“Getting a contract with the NBA was his first break,” Rona proudly said. “We all went to New York City to see his display in the NBA store.”

Port was eventually able to work with Jordan. Other Port clients include NBA star Carmelo Anthony, NFL Hall of Famer Ray Lewis, the Basketball Hall of Fame and Elvis Presley Enterprises. His “Ty Cobb Sliding” painting sold at a 2012 auction for nearly $25,000.

Port has turned his passions into a dream career, achieving a personal short-term goal of by having his art exhibited in NYC’s George Billis Gallery.

Unfortunately, due to covid, paintings were hanging and ready to go but the show, originally scheduled for March 19, 2020, was cancelled days before.

He is currently looking for new representation. “Long term, I’d love to see my artwork in some museums,” Port said, “but I’m pretty sure any artist would say that.”

His current work, is Port’s favorite he said, an extension of his Art of the Sole sneaker painting series. Port has recently teamed up with NBA Hall of Famer Shaquille O’Neal, who has signed a limited-edition series of the prints.

“Adam was thrilled that the Shaquille organization loved his replication of his famous shoe,” Rona said. “Adam has done many charity events for other celebrities but this one is special – basketball is his second love next to his family.”

The series is based on one of the first paintings from Port’s “Art of the Sole” series – “Pump It Up” (Reebok Pump Shaq Attaq Retro Orlando 2017). The painting features Shaq’s first signature shoe.

All profits from the addition will be donated to the Shaquille O’Neal foundation that aims to “bring change in communities in need and help underserved youth achieve their full potential,” according to the mission statement on its website.

For more information on Adam Port and his current projects, visit his website: www.adamport.com.