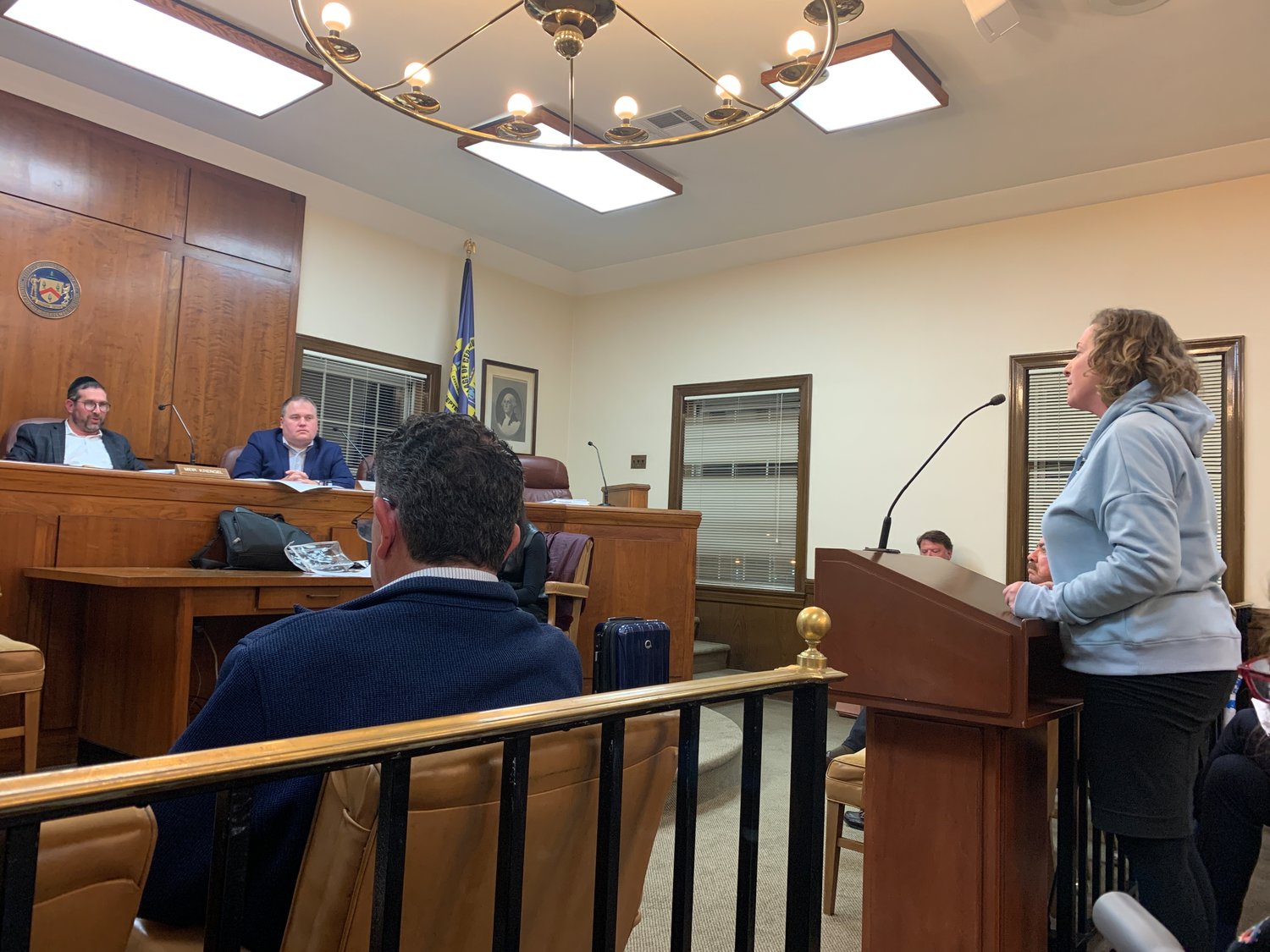 Cedarhurst resident Rena Saffra expressed her frustration to the appeals board on the proposal to build a 17-apartment development on densely populated Washington Avenue.
Hernesto Galdamez/Herald 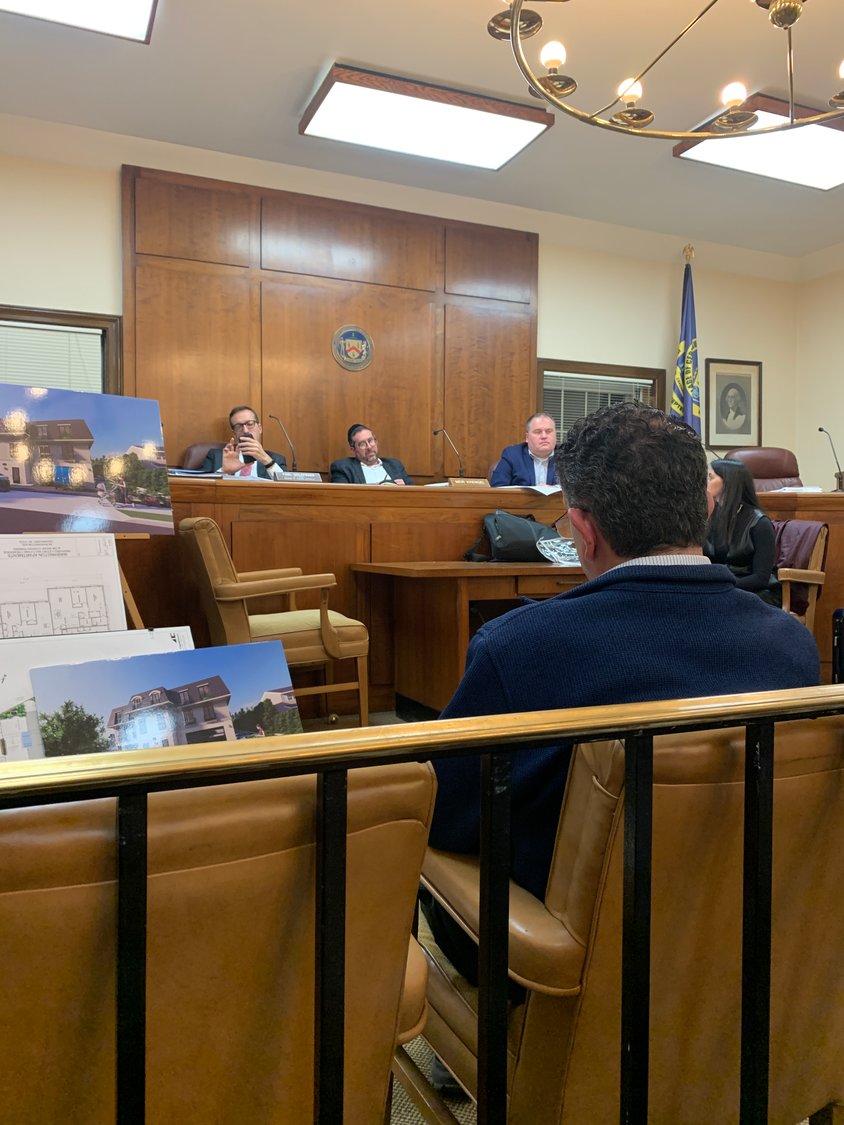 Overdevelopment is the bane of a suburb.”
Michael Hatten
By Hernesto Galdamez

The Nov. 15 Cedarhurst Board of Zoning Appeals meeting was stirred to life by a dozen residents who expressed their disdain for a 17-apartment residential development proposed for 68 Washington Ave., on the already densely trafficked street that serves as the dividing line between the villages of Cedarhurst and Lawrence.

The developer, Cedarhurst businessman Samuel Nahmias, has the project listed under Maximilian Holdings. It is planned as a three-story building with a partial basement. There is expected to be a lobby and a common room on the ground floor, along with one two-bedroom unit and 39 parking spaces. The second and third floors will each have eight two-bedroom apartments.

Current zoning on Washington Avenue allows only single-family houses. Nahmias is seeking a variance for a multi-family development.

Residents expressed their concerns about the project and what they predicted would be its negative impact on their quality of life. Michael Hatten, who has lived on Washington Avenue for 25 years, said he thought there was too much development in Cedarhurst. “Overdevelopment is the bane of a suburb,” said Hatten, a Lawrence School District Board of Education trustee. “I do not want to live in Brooklyn south. I want to live in this village.”

Blanche Lerer, a resident for 57 years, said she was concerned about how an increase in residential density could lengthen the emergency response time of the Lawrence-Cedarhurst Fire Department. “Your first concern should be for our safety, an emergency situation,” she told the board members. “Considering the heavy traffic where minutes count, not money.”

Lerer said that additional parking for patrons of the stores and restaurants in the village’s business district would be a better use of the 18,876-square-foot parcel. “The better use for this property would be expanding the parking,” she said, “allowing for the much-needed shortage of spaces for teachers, residents and shoppers who come from near to far that support our commercial stores.”

Cedarhurst resident Rena Saffra added, “I cannot believe we are here again to discuss another proposed project that’s too big for its property, and quite too big for the neighborhood.”

Adding an apartment development would only overload the street, Lawrence Civic Association President Jaqueline Handel said. “You can imagine the probable negative impact on the roadways,” she wrote in an email. “Additional vehicles impacting traffic conditions, first responders, fire trucks, parents dropping off and picking up their children for school, school buses, the environment, air quality during a construction period, and other factors.”

Before the Nahmias project was proposed, a few ideas were considered for the property, including office buildings, a boutique hotel and a parking lot. “I’m always looking to increase parking,” Cedarhurst Deputy Mayor Ari Brown said. “This would’ve been great. My (village) board was respectful, and they didn’t agree with me.” Brown is also the area’s state assemblyman.

Nahmias’s proposal was supported by the village board — but Cedarhurst Mayor Benjamin Weinstock said the project, in its current form, is not the two-story development he initially favored.

“The one he is presenting now I really haven’t studied, and it’s in a different scope than the one I had originally looked at,” Weinstock said, adding that residential use of the Washington Avenue property “is a good use.” “I can’t comment on the scope of the project now that it’s three stories,” he said.

Brown, who is in the construction business, noted that the property has been vacant for “many years.” “It bothered me,” he said. “I don’t like vacancies, and I fight to get rid of them. This isn’t the best project for this property — a parking lot would be. But if it’s a choice between a shul, with things going on all day, which is a beautiful thing, I’d pick this (the proposed apartment) every day of the week.” Brown said he has built 11 synagogues.

A decision on the variance will be made at a future Board of Zoning Appeals meeting. The board typically meets on the fourth Thursday of every month.

Have an opinion on the 68 Washington Ave. project? Send a letter to jbessen@liherald.com.