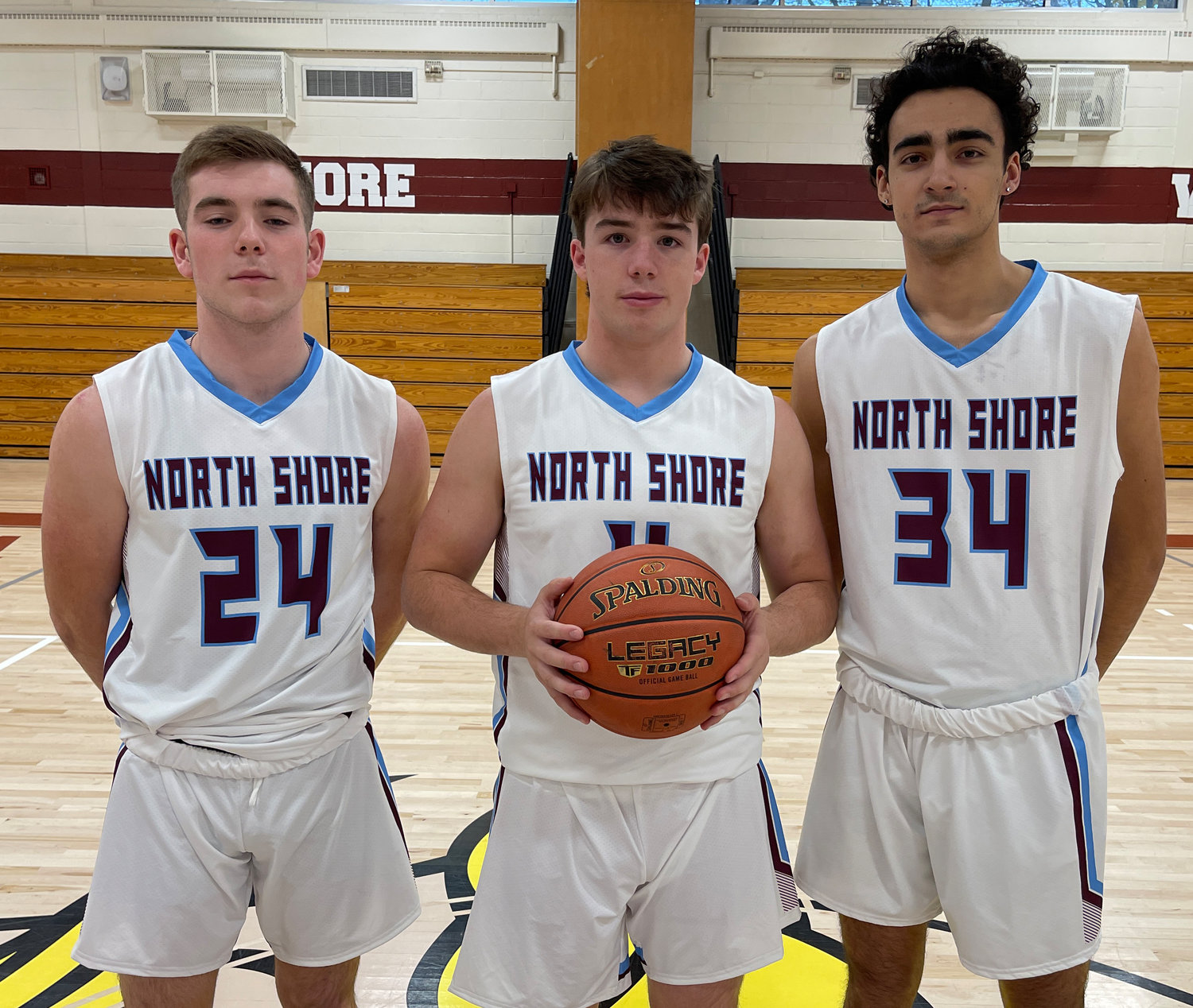 The North Shore boys’ basketball team’s victory over Valley Stream South last Saturday could be a turning point to the season.
The Vikings didn’t have to rely on their 6-foot-5 stud Vasilis Triantafyllou. With teams recently loading up against the big kid with the long Greek name, shooting guards Nick La Rosa and Ryan Freund stepped up, bagging 20 and 17 points respectively as the Vikings won, 57-50.
Now teams may have to pick their maroon-colored poison. North Shore is 10-6 overall; 5-3 in Conference A5, in third place. The overreliance on Triantafyllou stood as a concern for future prosperity in Sea Cliff/Glen Head.
After all, North Shore’s goal is not just making the play-in round of the Nassau Class A playoffs. A second-place finish in A5 that would net a home game in the first round is the target. The Vikings have been packing their gym this season.
Triantafyllou is averaging 17 points, but the team is better when the scoring is more balanced. “V’’, as his teammates call him, scored just 6 points in last Saturday’s victory. “It feels good that I’m the main focus whenever teams are playing against us,’’ he said. “It just means I have to kick it out more to my teammates. They’ve done a very good job the last game. Ryan and Nick, it makes scoring for them much easier.’’


La Rosa, the football star on its two-time county championship team, is averaging 11 points. Freund, also on the legendary football squad, is averaging 10 a game.
“They’re very tough physical matchups for anyone with their football presence,’’ head coach Ryan Berglin said. “They’ve done a good job getting into the paint and picking up the defensive intensity on the perimeter.’’
Triantafyllou still feels he can make other adjustments to get himself going. He’s a competent 3-point threat but unstoppable inside with his length.
“For sure,. I have to start being more consistent with my 3-point shooting,’’ Triantafyllou said. “Once I get into the paint I have at least three guys on me. I can get so many points off a catch-and-shoot 3 or a one-dribble pull-up.’’
The potential 3-pronted attack will get another test against second-place Clarke, which beat North Shore in its first meeting in early January after routing the Vikings on the boards. The rematch is Feb 4.
Meanwhile, nobody is catching unbeaten, first-place Friends Academy, the private school in Locust Valley. After moving up from Class B after a state semifinal berth, Friends Academy beat its neighbors in both games.
“Our main goal is to make the playoffs,’’ “V’’ said. ‘We have a very good chance. (Clarke) is a team we can definitely beat and want to beat the most. They beat us. It’s always a team we look forward to play against us.’’
North Shore’s defense has been stellar, allowing 49 points with a 27-percent opponent field goal percentage. Triantafyllon and Freund are the club’s top defenders, guarding the opponent’s best players.
“We play man to man,’’ Berglin said. We’re making teams struggle to score, doing a great job rotating to the ball crashing down on the weak side and rebounding the heck out of the ball.’’
The Vikings got a surprise boost after sophomore starting point guard Lucas Schimsky went down with a sprained ankle, missing seven games. In his spot, senior Gavin Butler excelled and proved to be a “glue guy’’. Ironically, Schimsky is back and Butler is out with a sprained ankle. He should be back right before the playoffs.
Against Valley Stream, they also got an unexpected shot in the arm from reserve Danny Lenney, who made a rare start and collected 4 blocks, with 8 rebounds and 4 assists.
North Shore’s worst habit is dreadful first quarters but adjusting to the new defenses should solve that mysterious habit.