Seeking to save the coastline

Army Corps studies the back bays of Nassau’s South Shore 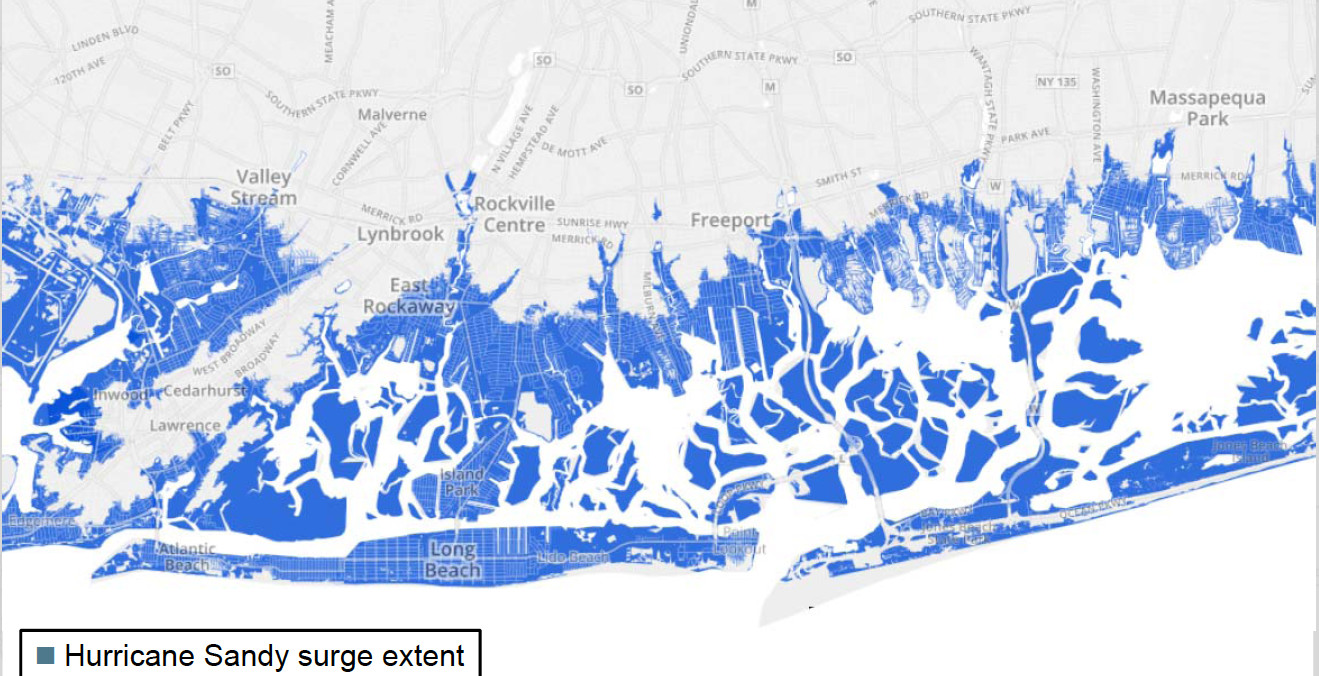 We learned of many firsthand experiences and eyewitness accounts of what occurred in the Five Towns during Hurricane Sandy.”
Danielle Tommaso, Army Corps Project manager
By Jeff Bessen

Reducing the damage to the South Shore’s back bays in Nassau County is the goal of a plan that the U.S. Army Corps of Engineers aims to recommend to Congress in 2020. A preliminary report is scheduled to be completed in a year, and public comment is being collected. The final report is expected to be complete in roughly three years.

Representatives of the Corps of Engineers presented their early findings — the study began in April — at Woodmere Middle School on Sept. 19. Corps officials said future meetings could be scheduled.

Coastal wave action and erosion, storm surge, flooding and heavy winds that accompany storms such as hurricanes are the risks to the South Shore because of the area’s geography and topography and the way land is developed, according to the corps.

“We learned of many firsthand experiences and eyewitness accounts of what occurred in the Five Towns during Hurricane Sandy,” Danielle Tommaso, the corps’ project manager for the study, said of the meeting. “These accounts were very helpful and enlightening.”

Fifteen people attended the meeting, six of whom were government officials or media representatives. Among the others were Alan Hirmes, a Woodsburgh resident and the village’s treasurer. “Clearly the study will benefit the South Shore,” he said. “They have what they call ‘multiple measures’ to solve different situations. Sometimes they’ll use more than one measure to solve a flooding issue.”

Hirmes noted that the study’s focus is the damage caused by Hurricane Sandy, and not flooding caused by excess rain. “They were clear to point out that this study will take no more than three years to complete,” he said of the corps, “and from then it goes to Congress for an appropriation … They were very sincere about their study, and were happy with the progress to date. What was disappointing was that there were less than 10 residents in attendance. The members of the corps were there to get feedback, and from some of the comments from the audience, they were taking notes, but a larger turnout, and therefore more comments, would have helped them better understand the issues.”

“I found it informative, but above all, reassuring that the Army Corps was exploring ways to keep our community safe from another coastal flood,” said Mario Alex Joseph, another Woodsburgh resident who, like Hirmes, was unhappy with the turnout. “We can’t rely entirely on representatives to voice our concerns, whether about flooding, evacuation routes, loss of green spaces, overdevelopment or general safety,” Joseph said. “The recommendations of the Army Corps may well impact views and usage of our property. These meetings are opportunities to share our concerns about our families, assets and communities with the agencies that are designing solutions to our problems.”

Joseph, a member of the Five Towns Civic Association, asked the corps representatives about evacuation routes, noting the heavy volume of traffic in the area, and whether the final report would include the potential development of the Woodmere Club. The civic association was formed last year by several community members in reaction to the news that the Woodmere Club would be sold and possibly converted into housing. It was sold to Weiss Properties and 2020 Acquistions in April, but no plans have been announced.

“It is not within the Army Corps of Engineers’ jurisdiction to comment on local development,” Tommaso said.

State Sen. Todd Kaminsky (D-Long Beach), who attended the Army Corps meeting in Long Beach on Sept. 18, said he believed the study would contribute to the long-term sustainability and resilience of coastal communities and the back bays.

“Bayside flooding in the Five Towns is a major issue, and we need a big, comprehensive plan to combat it,” Kaminsky said. “This will require years of planning and millions of dollars from the federal government, but this critical process must start somewhere — and it starts from the creation of the very plan that was being discussed at [the] meeting.”

To learn more or submit a comment, go to www.nan.usace.army.mil.
Have an opinion on shoreline protection? Send your letter to the editor to jbessen@liherald.com.
Report an inappropriate comment