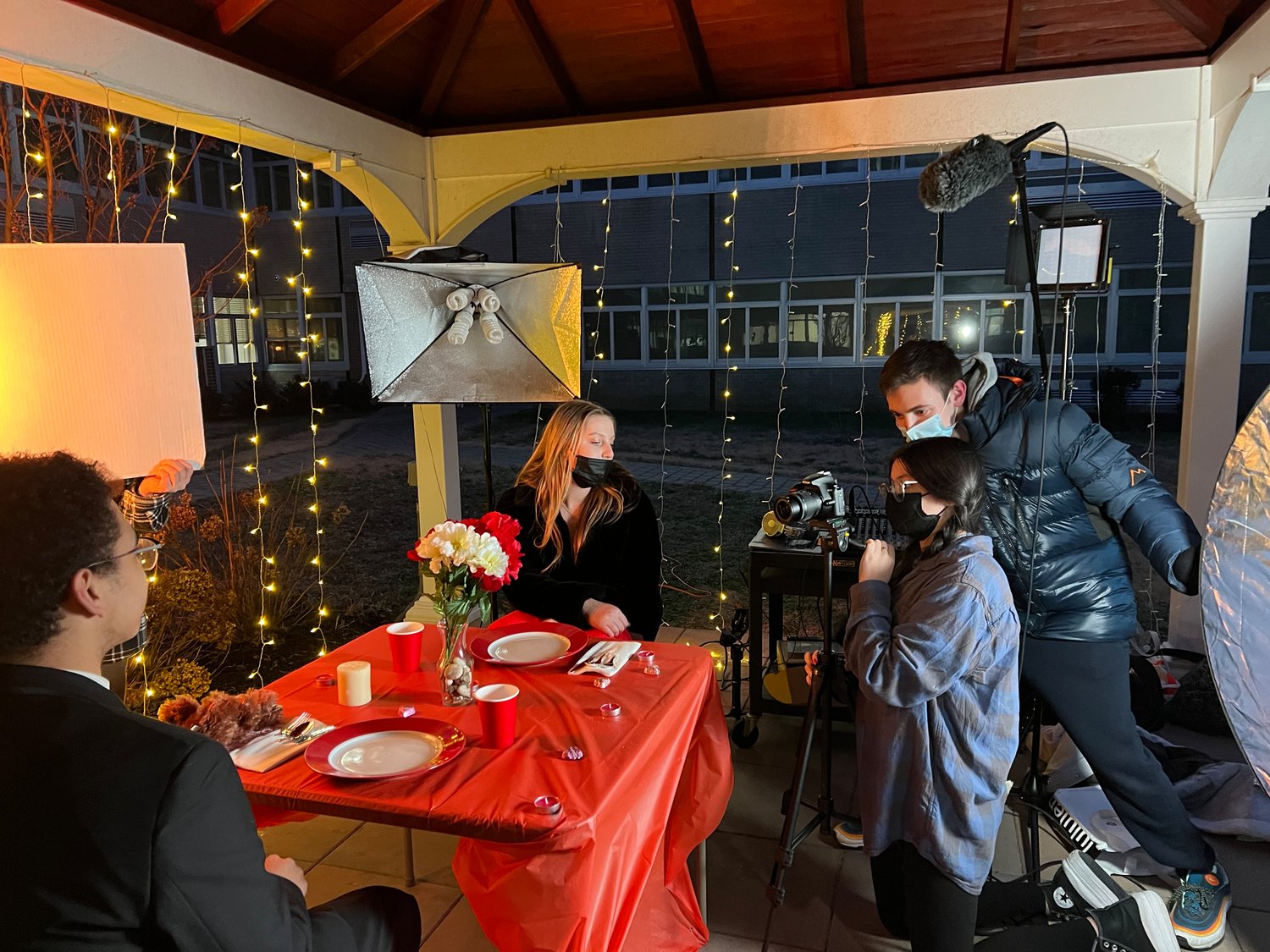 'Love is Better Blind,' a short film created by Preston Bowman and filmed by students in the Cougar TV program, was named best comedy at the American Film Youth Festival in Atlanta. It starred Ryan Garcia, left, and Samantha Schneider, center. Amanda Ham, at right with Bowman, worked behind the scenes.
Courtesy Preston Bowman 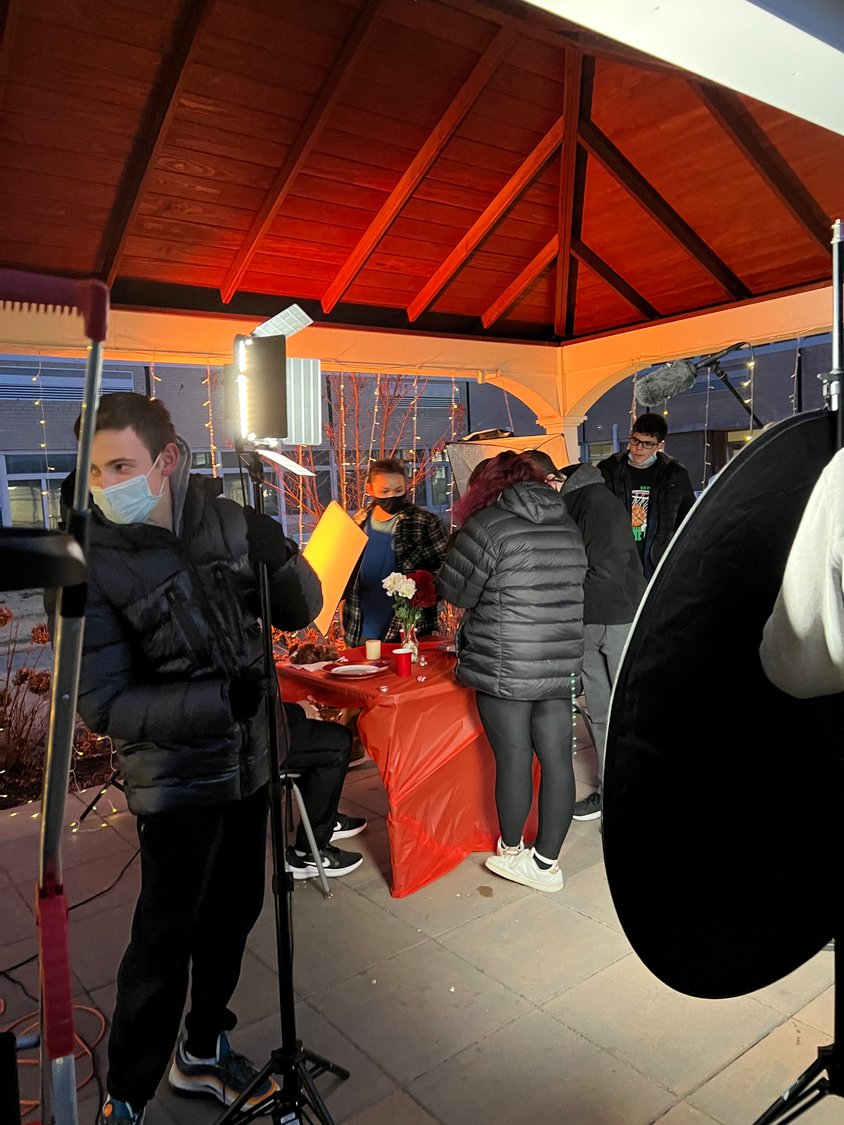 Preston Bowman helped build the Cougar TV program from the ground up, after some of his films were noticed by Kennedy’s administration, even before he was in high school. Above, Bowman, left, worked with the Cougar TV crew during the production of 'Love is Better Blind.'
Courtesy Preston Bowman
Previous Next

Preston Bowman, a rising junior at John F. Kennedy High School in Bellmore, has always envisioned himself in a career in filmmaking.

Even before he entered high school, he was putting his creativity to the test. When he was stuck at home at the beginning of the coronavirus pandemic in the spring of 2020, he created a movie with his family about escaping quarantine.

Kennedy’s principal, Gerard Owenburg, saw Bowman’s movie, and was impressed. He reached out to Bowman before the start of his freshman year, and asked if he’d be interested in helping build a television program at Kennedy.

When he was the school’s assistant principal, Owenburg oversaw student activity organizations. “For many years, we had always talked about some sort of media-type club, and we gave it a try a couple times,” he recalled. “It just had trouble sticking. We were in need of a student who was passionate about it and could help make it stick.”

That student turned out to be Bowman, and the South Bellmore native, now 16, jumped at the opportunity, and told the school what equipment it needed to create a media program. Cougar TV was formed in the 2020-21 school year, by just a handful of students.

Cougar TV is now a regular class during the school day, with over 20 students taking part in the program. It has its own studio, and they create videos, livestream events and do the morning announcements. The program’s faculty adviser, Brad Seidman, Bowman said, lets the students have control.

“When I was given the opportunity to make my own program, I jumped on it,” Bowman said. “(Mr. Seidman) is really laissez faire — he definitely lets us do our own thing. It’s very much a student-run program.”

“Preston has impressively built this Cougar TV program into something noteworthy through his incredible talents and good character,” Seidman said. “We’re lucky to have him in the student body at Kennedy.”

Cougar TV is somewhat similar to, but separate from, Bellmore-Merrick Broadcasting, the Bellmore-Merrick Central High School District’s specialty broadcasting program, which is housed at Wellington C. Mepham High School in North Bellmore. But, Bowman explained, Cougar TV does sometimes connect with BMB, and earlier this year, around Valentine’s Day, Kennedy students were invited to join BMB in a filmmaking competition.

“It had to be two minutes long, it had to have a teddy bear, and it had to contain the line, ‘Eww,’” Bowman said.

He knew what he wanted to create — a visuals-heavy short film, recorded outside, at night, in Kennedy’s courtyard — but he didn’t have a lot of time to do it. After being given permission to film on school grounds at night, Bowman and the Cougar TV team got to work.

“We spent four or five hours in a blizzard,” Bowman recounted. “It was snowing, and absolutely freezing. But it was just cool to watch my ideas come to life in front of me.”

The short film, “Love is Better Blind,” portrays a blind date gone horribly wrong, according to Bowman. It was nominated for a Bellmore-Merrick Broadcasting award, which it didn’t win, but was also submitted to two student film festivals, the first of which, the American Film Youth Festival, took place earlier this month in Atlanta. “I try to keep my expectations low,” Bowman said, “but I was fairly nervous and excited.”

At the Atlanta festival, which Bowman attended, “Love is Better Blind” was named best comedy.

“It’s unbelievable,” Owenburg said. “His talent for things like that — he really has just a creative mind.”

“I am incredibly proud of Preston and the entire Cougar TV team for this award-winning production,” Seidman added.

The film is also now an official selection in the largest high school film festival in the world, the All American High School Film Festival, which will take place in Manhattan in October. It will be screened at the AMC theater in Times Square.

“This is a lot harder to get into,” Bowman said of the upcoming festival. “To think that our film, we made in the middle of a blizzard, made it to two film festivals, is crazy.”

Ultimately, what Bowman wants to do is attend film school in New York, California or Atlanta. But for now, he said, he just wants to help Cougar TV expand. Owenburg said that thanks to the kind of person Bowman is, keeping the program alive shouldn’t be a problem.

“He just has such a dynamic personality,” Owenburg said. “Kids are drawn to him. I’m sure there’s going to be exciting things to watch him do.”

To view the film, and to see more of the program’s work, visit its YouTube channel, Cougar TV.

“I’m always looking to improve, and I’m just looking forward to seeing the continued growth of the program,” Bowman said, “and I’m really excited to go to film school.”