‘This is an emergency’ 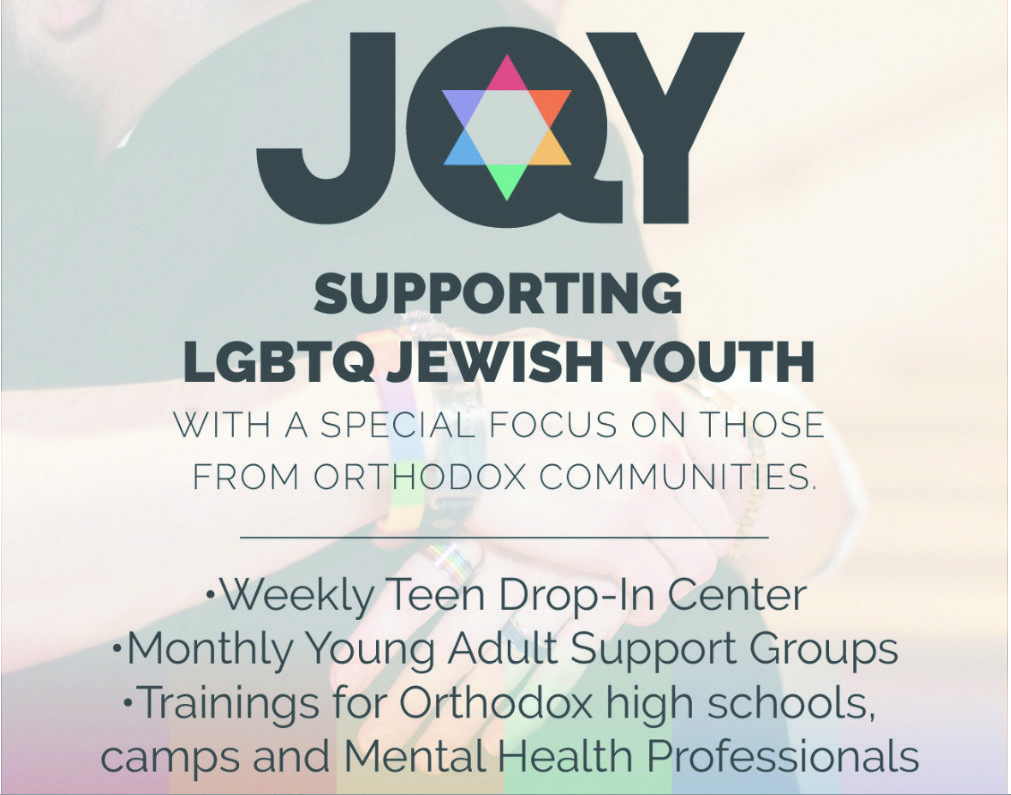 It is said that LGBTQ youth might get kicked out of their homes, but Orthodox families lock them in their homes.”
Mordechai Levovitz, Jewish Queer Youth clinical director
By Jeff Bessen

“That is quadruple the national average,” Levovitz said. What drives that number is not the religion, he said, but being rejected by family members, the community, a school and a synagogue. “It is said that LGBTQ youth might get kicked out of their homes,” he added, “but Orthodox families lock them in their homes.”

Jewish Queer Youth is a nonprofit organization that aims to support and empower LGBTQ youth in the Jewish community. JQY’s mission is to advocate for, and help ensure the emotional and physical health and safety of, teens and young adults from Orthodox, Hasidic and Sephardic communities. The goal, according to the group, is for the two age groups it serves — 13 to 18 and 18 to 23 — to understand that they are valued members of the Jewish community and that they are not alone.

Alison Feit, director of the Jewish Center for Trauma and Recovery in Manhattan and a co-editor, with Alan Slomowitz, of the 2019 book “Homosexuality, Transexuality, Psychoanalysis and Traditional Judaism,” frequently serves as a link between Orthodox rabbis and queer youth.

Levovitz said he believes that the fear of being embarrassed and ostracized from their community keeps parents from being publicly supportive, and that rejection deflates a teen’s self-worth to the point where he or she is likely to delve into risky behavior ranging from cutting to drug use to sex. Even children as young as 13 have sex with adults, he said.

“The message is clear that being gay or lesbian, there is something wrong with you,” Levovitz said. “Whether it be the rabbis or the stores that won’t put up our posters; the pizza shop and the [Jewish] newspapers telling you it’s wrong.”

Founded in 1999, Jews Offering New Alternatives for Healing, or JONAH, offered conversion therapy to those who sought to change their sexual orientation. In 2015, JONAH’s claim of success in doing so was deemed consumer fraud in what legal experts called a landmark case, and the organization was ordered to shut down and pay restitution to its victims. So JONAH became JIFGA, the Jewish Institute for Global Awareness. Four years later, JIFGA was also ordered to close, and to pay $3.5 million in restitution.

“This is an emergency,” Levovitz said of the frequency with which those who visit JQY mention suicide, “and the house is on fire.”

The organization works with teens and young adults at drop-in centers where no appointment is needed, young people can see a social worker and the level of their trauma is properly assessed. The centers also function as safe places to relax.

Her son is doing well
Reva Bach (not her real name) said her son told the family he was gay as a ninth-grader in 2008. “It was an extremely difficult reality, as many years ago the acceptance was not what it is today,” she said. “We felt alone, isolated and depressed. There are so many more families, programs and other kids who have come out that it makes it much easier [today].”

Bach said she learned of JQY through her son, when he was in high school. “Unfortunately, therapists labeled JQY as militant, which it most definitely is not,” she said. “Once my child went in in the 11th grade, it was extremely helpful for [him] and the family.”

JQY helped the family deepen its understanding of how to be supportive, and “lets us know that neither my child or family is alone,” Bach said. “Jewish Queer Youth was an amazing outlet for my child. [It] allowed my child to feel normal, accepted, safe, grow and mature.” Her son now works in data analytics, and is “a very productive, happy member of society.”

After coming out three years ago, learning about JQY and using its services, Aviva Chait, 20, is now the young adult intern at the Cedarhurst drop-in center. She facilitates meetings, coordinates guest speakers and helps market the organization.

“The main thing is that some of the people have really rough backgrounds,” Chait said, alluding to family rejection. “During the check-ins with the licensed social workers, they make sure you’re safe and know about the resources that are available.”

She added that making connections, having conversations and even having a sense of humor are all part of the center’s mission to help others acknowledge all the sexual identities.

“To reach out, contact us,” Chait advises young people who identify as LGBTQ. “Having friends is really important. Also knowing a person’s intersectional identity” — the ways in which gender, race, class, sexuality and disability overlap — “and the power and beauty of being queer, being religious, being Jewish, and having strength in that.”

The Manhattan office is open daily (for private and family consultations), the midtown drop-in center is open weekly on Thursday evenings, and the Cedarhurst drop-on center is open on Sundays.