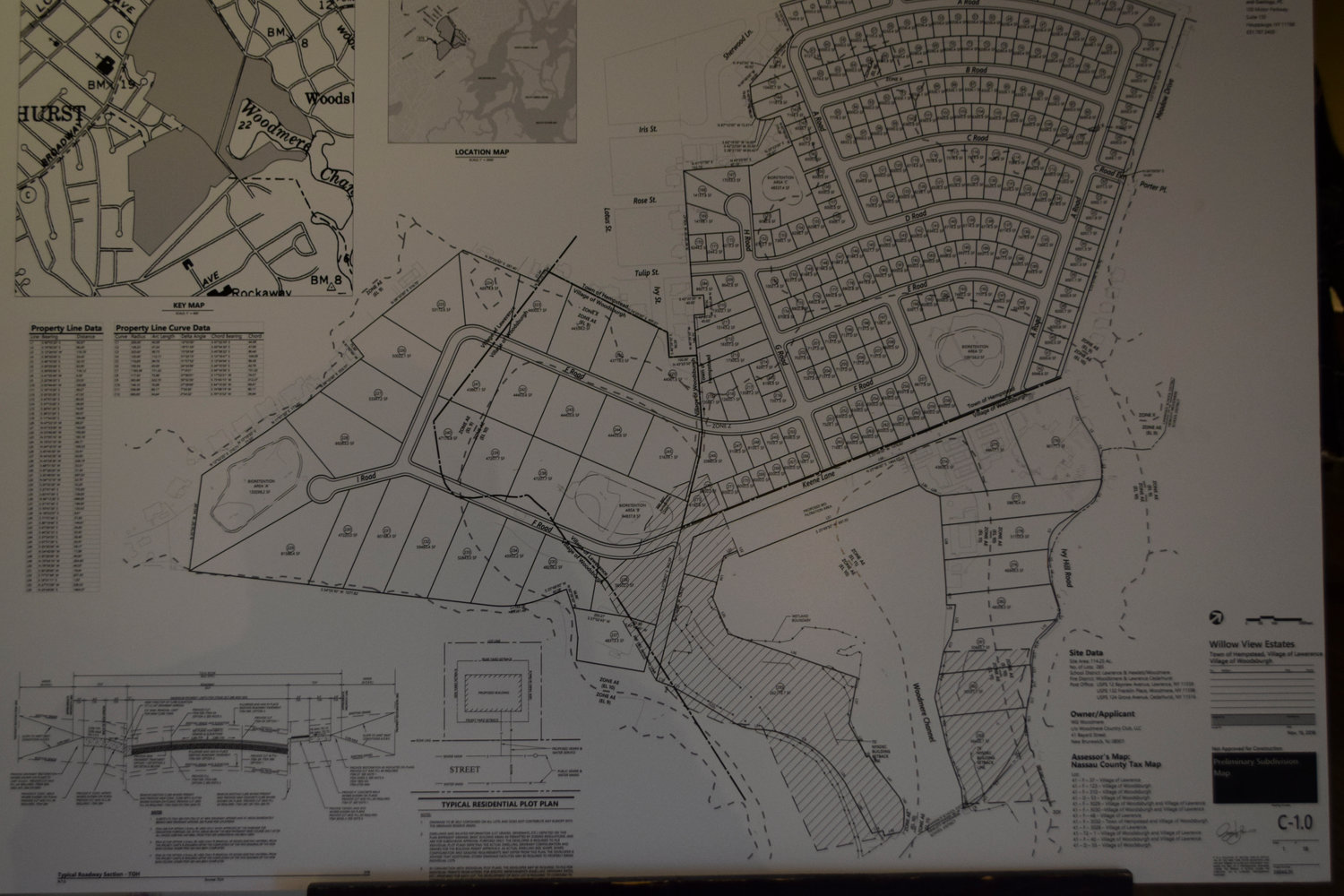 The proposed Willow View Estates development on the 118-acre Woodmere Club, which will be discussed at a scoping meeting on June 26.
Jeffrey Bessen/Herald

The Nassau County Department of Public Works Planning Commission will give community members a chance to voice their opinions on the proposed development of the Woodmere Club in what the agency is calling a “scoping session” on June 26.

The commission will address the potentially adverse impact of the planned residential project as it collects information to draft an environmental impact statement in the coming months as part of the State Environmental Quality Review Act, which requires government to consider the environmental implications of such projects as well as social and economic factors.

The planning commission coordinates oversight among all the governments and governmental agencies involved, and must approve the development. The project has been classified as Type 1 under SEQRA, which means it is likely to have significant environmental impact and calls for the most rigorous review.

The development, called Willow View Estates, includes 285 homes on 114.25 acres of the 118-acre site. All but 37 of the homes would be built in Woodmere; 24 would be in Woodsburgh and 13 in Lawrence. The property also extends to within 300 feet of Cedarhurst village. Approval is re-quired from each municipality.

“This is by no means a done deal,” said Five Towns Civic Association member Rena Saffra, a Cedarhurst resident who spoke at a Lawrence Association meeting at the Lawrence Yacht & Country Club on June 11, “This is basically their wish list based on current zoning in the area,” Saffra added, referring to the proposal that club owners Efrem Gerszberg and Robert Weiss submitted to the planning commission.

Civic association members, backed by the Lawrence Association, are pushing residents to attend the scoping session and offer their comments on the proposed development. Saffra said she believed that a traffic study, to be conducted by the developers, needed to be expanded, because there is no mention in the developer’s submission of routes or vehicle volume on the Nassau Expressway and Rockaway Turnpike.

Saffra also noted the possible impact on the community’s first responders, including emergency medical technicians, firefighters and police, as well as the potential for additional development in nearby Inwood and North Lawrence.

“We need to unite for the greater good of all our communities, including our neighbors in every one of the Five Towns,” Lawrence Association President Paris Popack said at the meeting. The association serves as the village’s civic organization.

Gerszberg and Weiss bought the 111-year-old Woodmere Club in April 2017 for a little over $9 million, and assumed nearly $15 million in debt.

Gerszberg said that every proposed lot meets or exceeds the minimum required size under the “as-of-right” zoning for the golf course. “Our professionals have already anticipated and will deal with the issues brought up by the Five Towns Civic Association,” Gerszberg said. “Our site plan meets all the requirements under law, including traffic, environmental and general land-use issues.”

Land use and land values are the primary reasons that civic association members oppose the development, which, they say, will reduce open space and possibly negatively impact home values.

Eric Alexander, the director of Vision Long Island, said that studies have shown that development in downtown areas raises land value, but development of open space, such as a country club with a golf course like the Woodmere Club, “brings a perception of denigration.”

“Successful land-use applications have people working together — not lawyers and lawsuits and people yelling at public hearings and abdicating responsibility to the courts,” he said. “You need to have skin in the game.”

Alexander’s recommendations include engaging the developer in discussions of options to minimize environmental impacts, cluster zoning — determining the number of homes for an entire area instead of on a lot-by-lot basis — to preserve more open space and the possibility of rental units.

Weiss said that he and Gerszberg have spent more than $500,000 on a site plan that he said “conforms to all land-use regulations.” “We look forward to working with all of the involved municipal governments and agencies as we continue the process set forth by law for the review of the subdivision,” Weiss said.

The scoping session is scheduled for 6 p.m. on June 26 at the Theodore Roosevelt Executive and Legislative Building, at 1550 Franklin Ave. in Mineola. The deadline for written comments is July 15. They should be sent to John Perrakis, Planner II, Nassau County Department of Public Works – Planning Division, 1194 Prospect Ave., Westbury, N.Y. 11590 or willowseqr@nassaucountyny.gov.