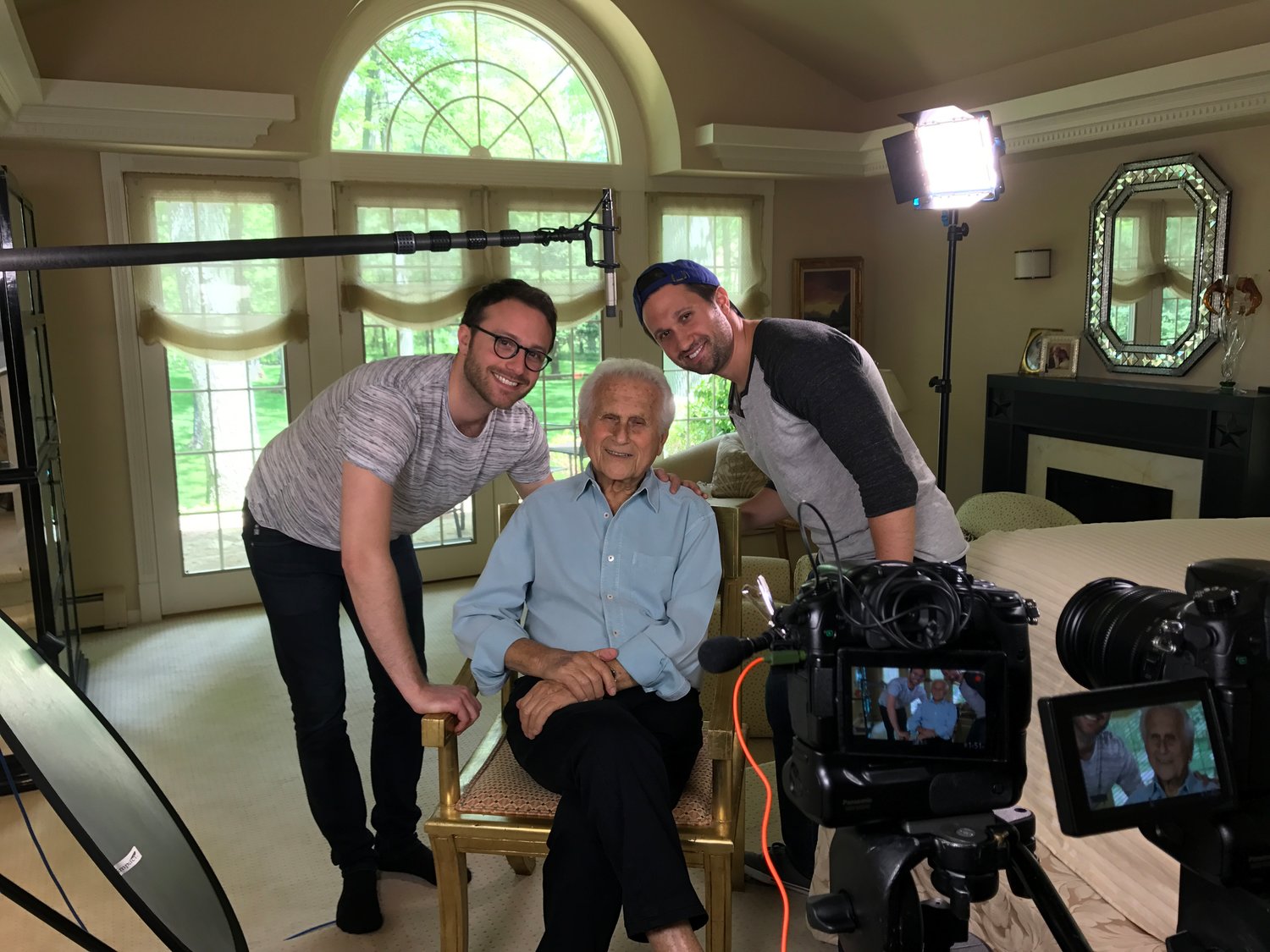 ‘The Starfish’ documentary is a family project. From left, producer Alex Utay, another one of Herb Gildin’s grandchildren, Herb, and the director Tyler Gildin.
Photos courtesy Tyler Gildin 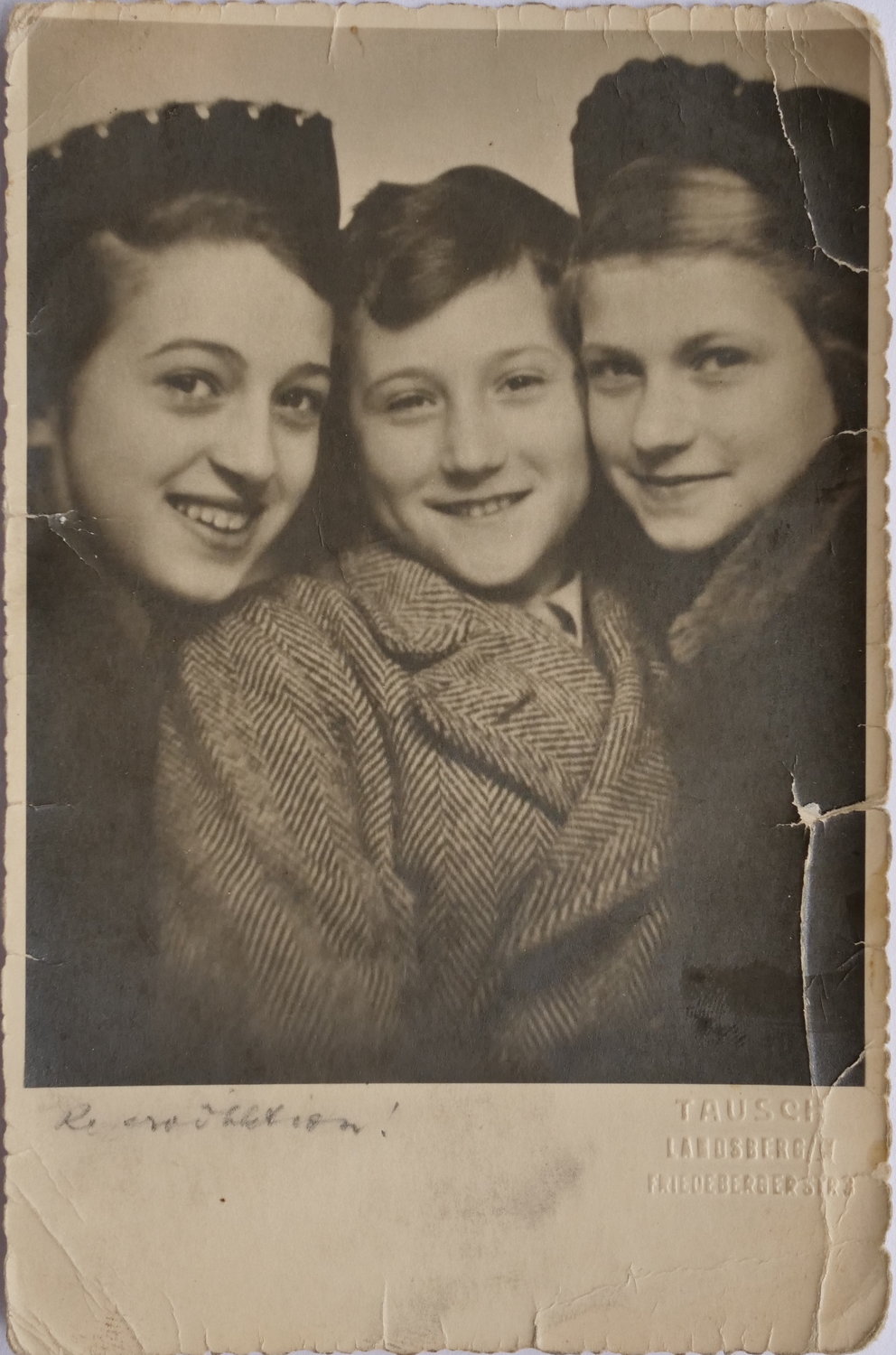 From left, Cele, Herb and Margaret Gildin were split up and sent to live with non-Jewish families in Sweden from Germany in 1939.
Previous Next
By Tyler Marko

Herb Gildin was a 10-year-old Jewish boy living in Nazi Germany in 1939. Gildin was luckier than many others, with help from the Hebrew Immigrant Aid Society he and his older sisters Cele, 14, and Margaret, 12, were split up and sent to Sweden to live with non-Jewish families far away from the Nazis’ reach.

After two years in Sweden, the children escaped and traveled east. They trekked all the way through Russia and across to the Pacific Ocean to the United States, where they were reunited with their parents. For years, Gildin lost contact with the Swedish family that took him in, but in 2001, he made the journey back and reunited with the surviving members of that family.

Cele died in 2017, and after hearing the stories at the funeral about what his grandfather and his aunts went through, Woodmere native Tyler Gildin, decided he was going to produce a documentary chronicling this portion of his grandfather’s life.

Gildin, 29, who now lives in Manhattan, first created a video with a few friends called “Nassau State of Mind” the parody of Jay Z’s “Empire State of Mind” song went viral in 2010. After graduating Syracuse University, he worked as a standup comedian, at Elite Daily, an online news platform (where he won an Emmy Award); and then started his own company Gildin Media. Using the resources at his disposal, he began working on “The Starfish,” a 40-minute documentary.

“So many people my age tell Holocaust stories about the horrors they endured,” said Herb Gildin, who will be 90 this April. “It’s not that, ours is about three kids who were helped by strangers … It’s a story about what a difference this family made to me.”

The film will premiere at the Miami Jewish Film Festival on Jan. 21. Tyler, Herb and Mark Hetfield, the president and CEO of HIAS, will be there. “The remarkable tale ‘The Starfish’ tells is a profoundly moving, warm, and captivating generational story that speaks to the human heart’s determination,” said Igor Shteyrenberg, executive director of the Miami Jewish Film Festival. “We are honored to host its world premiere and hope its powerfully emotional and inspirational message will resonate across the nation.”

The title refers to a folktale about an old man who sees a boy on a beach tossing starfish back into the ocean. The man tells the boy that there are so many starfish that he’ll never make a difference, he won’t save enough. The boy responds by tossing another starfish into the water, and telling the man that he just made a difference to that one. Both Tyler and Herb saw this as a connection to the family in Sweden, “They took a chance on my grandfather,” Tyler said. “Because of them my grandfather’s been able to help others. One good deed to one person can create a ripple effect.” Tyler’s grandfather agreed. “You may not be able to help the world, but you can help one person,” Herb said.

Last month, Tyler and his wife Zara had a son, Brody. “It’s cool to know that this exists for him,” he said. “I wish that I had a documentary that I could watch about my great-grandfather."

After the movie is screened at the festival in Miami, Tyler hopes to enter the film into more festivals and find a distributor for the documentary so more people can learn about his story.
Report an inappropriate comment