A focus on abandoned animals at Lifeline 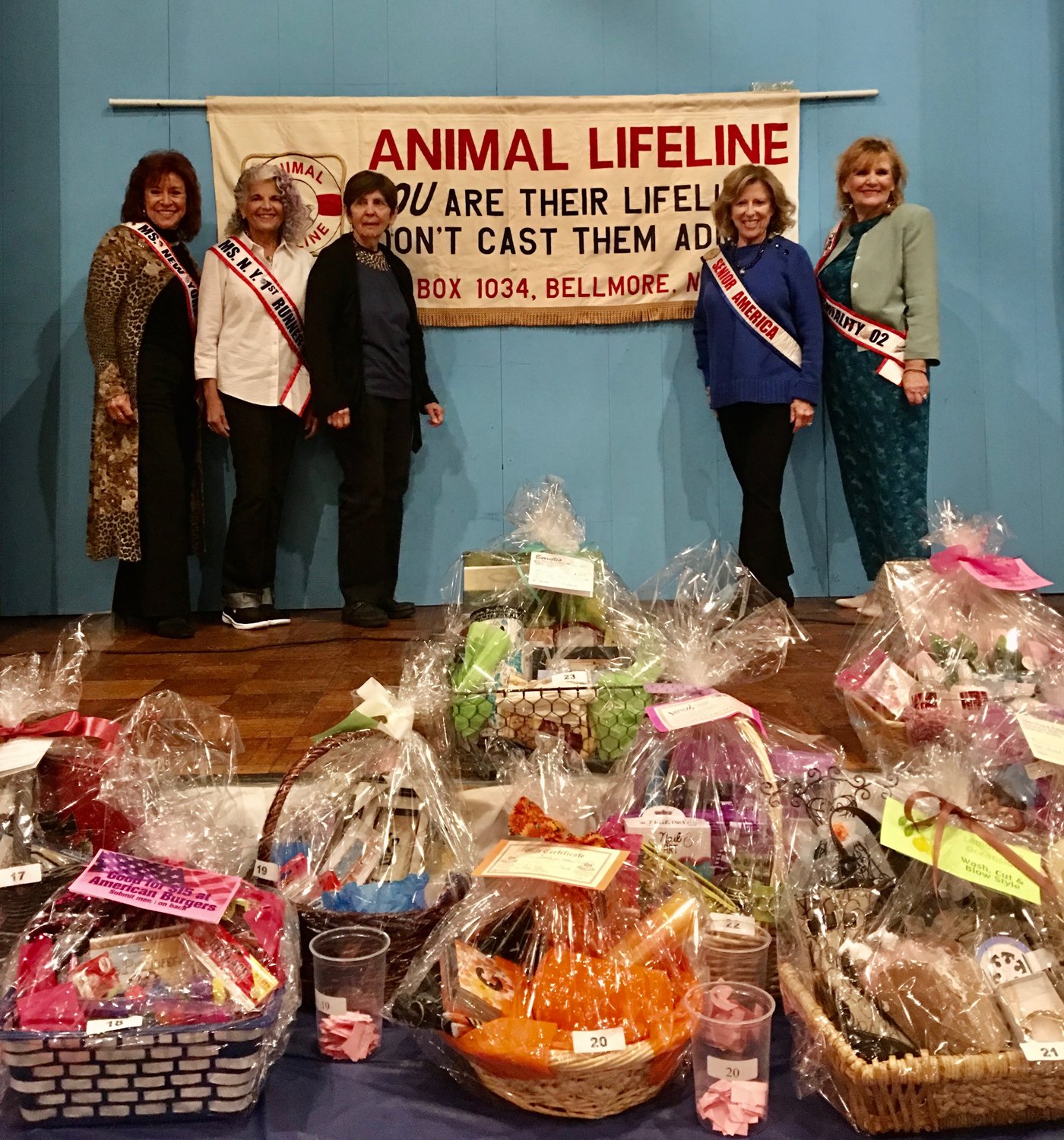 Dolores Hofman, far left, with Phyllis Bogart, Betty Tucker, Marleen Schuss and Pat Tropea, helped raise awareness of abandoned animals that need to be rescued and sheltered at the 2016 Ms. New York Senior America event. That was one of a number of ways in which Animal Lifeline, which Hofman runs, has publicized its efforts to rescue and foster strays.
Courtesy Dolores Hofman
Ways to join the Animal Lifeline mission

Through Animal Lifeline’s website, people can pay to support a variety of costs, including feeding, neutering and medical care for sick animals.

All donations go toward the organization’s vet expenses and animal food costs, according to Dolores Hofman, who runs the group.

The organization is constantly in need of cat and dog food, as well as other pet supplies. These products may be ordered and mailed to them online from Amazon or any of the pet supply websites.

Additionally, there is an Amazon wishlist where individuals may select and pay to bring over products and supplies that are beneficial to the animals and organization.

For nearly half a century, they have worked to remove stray and abandoned animals from the streets of Freeport, Merrick and beyond.

Based in Bellmore, Animal Lifeline is a nonprofit founded with the goal of saving and rehoming as many cats and dogs as possible. It raises funds through a number of means, including a comedy dinner show and auction it hosted last week.

The group focuses not only on rescuing and fostering, but also on humane trapping, spaying and neutering, and rehabilitation.

“​​There are folks out there that just totally resent stray animals, and they can become a nuisance to them. So, we just try to keep the population down so that they don’t become a nuisance,” said Dolores Hofman, the group’s president. “We feel that the people that feed strays, they think they’re do-gooders. But if they don’t get the animal spayed and neutered, they’re just adding to the problem of overpopulation of the strays. So, it’s so important to keep that population down both for humans’ sake, and the animal’s sake.”

Merrie Gordon is one of the volunteers who takes in rescued animals. She has a rather lengthy history of helping and taking care of animals, having volunteered in other animal caretaking positions roles for 30 years in addition to her 14 with Animal Lifeline.

Gordon grew up in a neighborhood where everybody had pets, but few could really afford to properly take care of them.

“So, of course, our neighbor’s cats always ended up in our backyard,” she said. “I was kind of a latchkey kid, so, the German shepherd and the cat always kept me company until my family was around.” said Gordon.

Animal Lifeline employs what’s known as the “TNR” method — trap, neuter and return. It’s considered one of the most humane and successful way for handling feral and stray cats while bringing down their numbers. Some feral animals will always remain feral, and volunteers feed and monitor them after they’re returned to their native habitat.

By limiting breeding cycles, Animal Lifeline can contribute to a reduction in the number of strays ultimately euthanized in local shelters.

“We set up traps — usually at night — and we get them used to coming in for food at a certain time,” Gordon said. “That’s how you trap and train them. If you can, you set up the trap so it doesn’t go off, and you put food in it for a couple of days. And you wait for the cat to get used to that.”

One thing Animal Lifeline is not, however, is a shelter. It also can’t help animals who are given up because of allergies, new additions to families, or because a particular pet is suffering behavioral issues. Instead, the group offers alternatives, while also providing treatments, medication, and spaying and neutering for abandoned animals at shelters.

Gordon has turned her garage into a temporary shelter where she keeps cats acquired through the TNR method. She erected panel installations, installed air conditioners and portable heaters, and has several cat cages and beds for the animals to rest and heal.

“​​Once in a while, something unfortunate happens,” Gordon said. “This past month, we had a cat who had a broken leg, and a cat who had a de-gloved tail where the skin was completely ripped off. I was holding them for a month.

“You think it’s going to be a one-day deal, but it’s not. It ends up being longer.”

But for all the attempts to control the stray population, the coronavirus pandemic seems to have reversed it. At least from what Gordon has observed when traversing the streets of her community.

“Everybody was sitting at home, and they went, ‘Let’s get a nice cute little puppy,’” Gordon said. “It’s almost kind of like the ‘let’s get a puppy for Christmas syndrome.’ And by February, that same puppy is looking for another home because everybody’s tired of it.

“People adopted kittens, puppies, chinchillas and ferrets because they were sitting home and they were bored. Not intentionally malicious, but it seemed like a good idea at the time. And then, when they go back to work, they realize that they don’t have the time to devote to it, or they got the animal for the wrong reasons. And there’s just not enough room in the shelters to handle the number of animals that are being returned.”

“We haven’t had a fundraiser in over three years,” Hofman said. “We had about 125 people attend our comedy dinner show, along with a Chinese auction. The money collected will help us help those that cannot speak for themselves.”