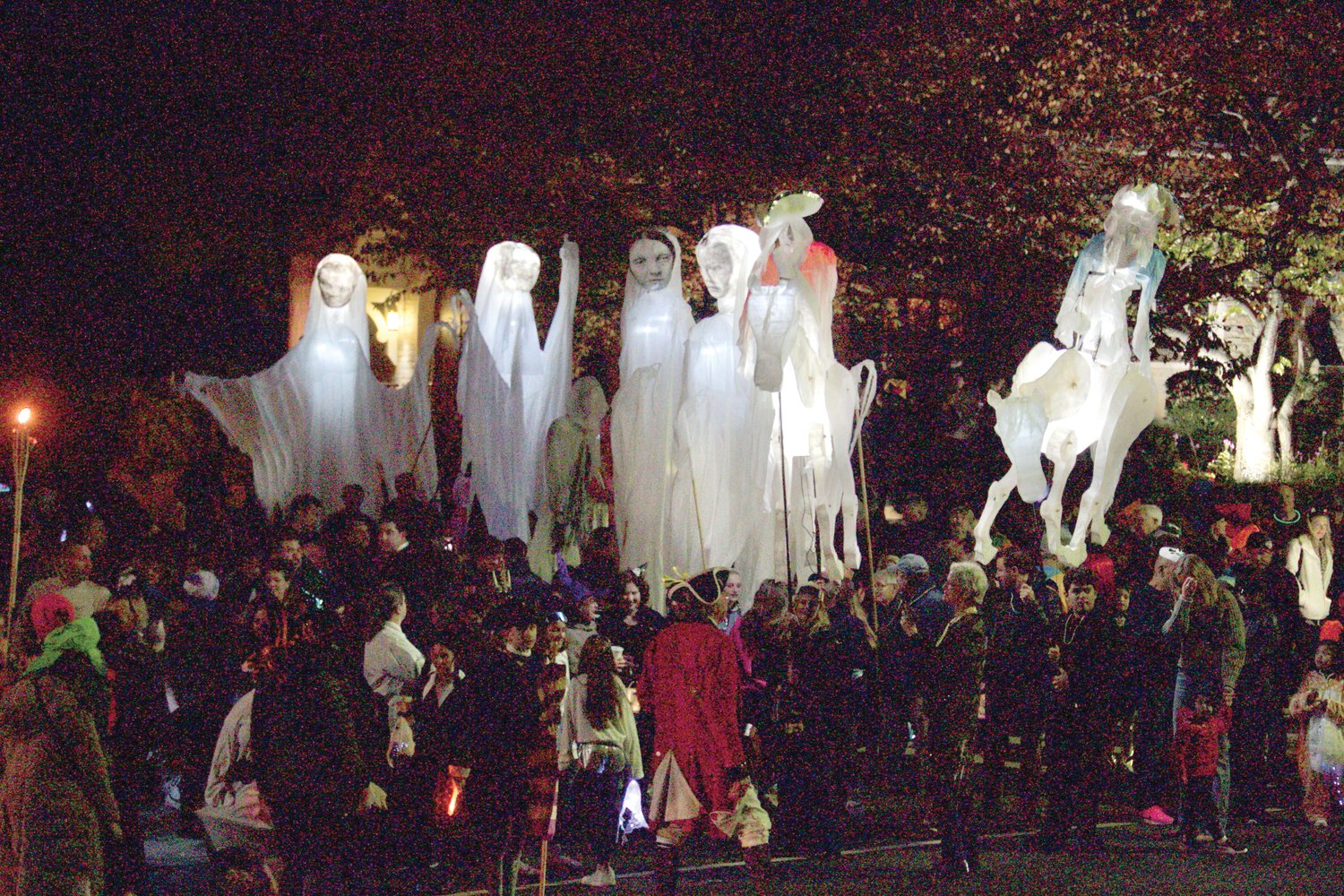 Long past Halloween, the ghosts that supposedly haunt Raynham Hall continue to interact with visitors during the monthly ghost tours.
Elisa Dragotto/Herald
By Will Sheeline

Halloween has come and gone, but the spooky thrill of the holiday hasn’t yet worn off at Raynham Hall, where the house museum will continue to hold ghost tours through its halls one night per month.

While Raynham Hall is best known as the birthplace of American patriot and Revolutionary War-era spy Robert Townsend, it has unofficial notoriety as one of the most haunted homes on Long Island. Numerous ghost-focused websites and surveys assert that the ghosts of numerous residents of the home are still there, such as Robert’s sister, Sally, and two British officers, John Graves Simcoe and John Andre, who occupied the property during the Revolution.

Christopher Judge, head of visitor services at Raynham Hall, explained that the museum offered ghost tours for years, but had taken a break to focus on the rich history of Oyster Bay and the Townsend family. The popularity and notoriety of the building as a haunted place, however, continued to draw ghost-chasers and spiritualists, however, and museum officials reinstated the ghost tours in October.

“Raynham Hall is listed in a lot of websites and even some books as one of the most haunted places on Long Island, and a lot of visitors have said they’ve had a supernatural experience here,” Judge said. “We don’t know how it started, but it’s one of those things that once it’s on the internet, you just can’t get rid of it.”

The tours are led by the museum’s tour guides as well as a professional spiritualist healer, Samantha Difronzo, of Hicksville, who has been working in the field of spiritualism for four years.

Difronzo got involved in the tours through a friend’s sister, Mary Kenny, a tour guide at the hall who now helps lead the ghost tours. Difronzo said that when she first visited the museum, she was surprised and excited by how friendly and welcoming the spirits of the old house were.

“The spirits — especially the original owners, like Samuel and Sarah Townsend — they want to connect and show that they appreciate everybody that’s coming and seeing their history, and to connect with them,” Difronzo said. “So as we walk forward, they’re walking with us, trying to interact with us and share their point of view.”

Difronzo’s role, she said, is more than just “speaking to the dead.” She is tasked with providing a conduit through which the

spirits of the deceased can express their desires and address whatever still tethers them to the mortal world. While she doesn’t teach the tour-goers the history, she does act almost as a thermometer of the spirituality of the place, she added, gauging the level and benevolence of spirituality in the house as a tour goes through.

But that doesn’t mean that the museum’s tours have lost their historical edge or accuracy. According to Judge, the ghost tours still cover much of the history of the house, although they are held only in Raynham Hall itself, not the visitor center, which is in a building nearby.

According to Mary Kenny, the tours have been a success so far, frequently selling out.

“The first weekend we did it, before the Halloween parade, it sold out so quickly that we had to add another week because it was so popular,” Kenny said. “It’s been very successful, and we’ve had at least one woman come and then become a member because she wants to be able to come back more often and experience the house again.”