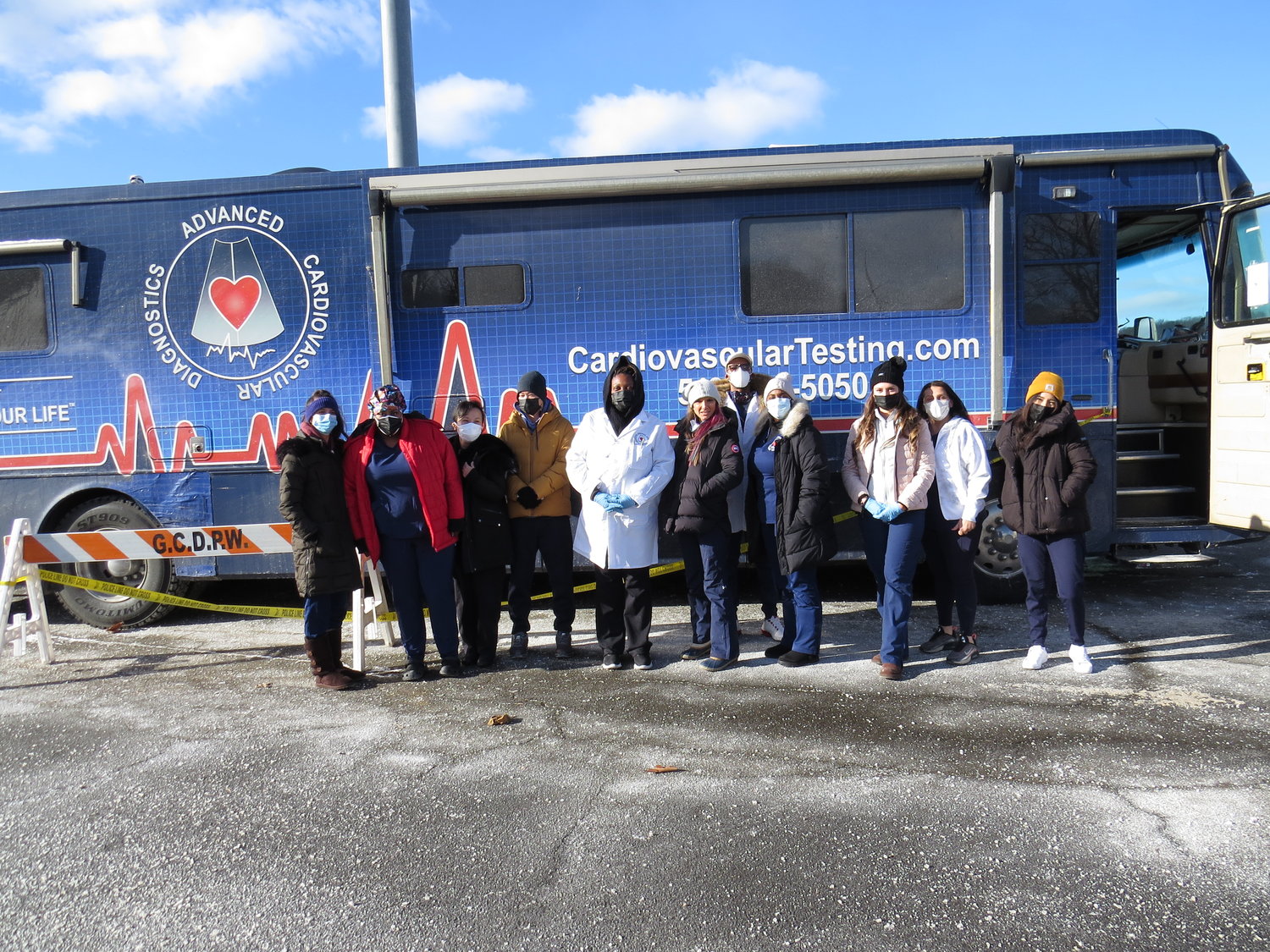 The City of Glen Cove is partnering with Advanced Cardiovascular Diagnostics, of Great Neck, to offer drive-through Covid-19 testing at John Maccarone Memorial Stadium. Residents of Sea Cliff and Glen Cove began receiving PCR, rapid and antibody tests on Jan. 11 in the stadium parking lot, in their vehicles. Tests will be offered seven days a week from 8 a.m. to 8 p.m. by appointment. Times can be booked on the city website.

Visitors can expect rapid test results within 10 to 15 minutes, and antibody and PCR results within four or five days by email. All health insurance is accepted. Those without health coverage can access state-provided insurance with a photo identification showing New York state residence.

“Nobody is going to get a bill,” Roseanne Frankel, Advanced Cardiovascular Diagnostics’ field supervisor, said. “It’s open to all. Nobody is turned away.”

“To meet the urgent need for Covid-19 testing, Glen Cove Hospital responded on Dec. 26 to offer free PCR testing at the hospital,” Kerri Anne Scanlon, RN, the hospital’s executive director, said. “To date, we have provided over 2,000 tests to community members to help ensure the health of residents and their loved ones.”

The opening of the stadium testing site was on the agenda at the Jan. 11 City Council meeting, but it was expedited, at no cost to the city, because residents have had difficulty finding accessible testing locations.

“It all kind of fell into my lap in my first week, and I took advantage of the opportunity,” Mayor Pamela Panzenbeck said. “We did not want to wait. We did it as quickly as we could. We got it up and running several days earlier than we expected to.”

Panzenbeck is working on her next initiative to combat the spread of the virus: She hopes to open a Covid vaccine site in the city. “We’re doing everything we can,” she said.

The Nassau County Department of Health reported 1,424 new Covid-19 cases in Glen Cove on Jan. 11 for the week before. “If you’re getting symptoms, [you] need to get tested, because people are showing up positive when they don’t think they have anything,” Frankel said. “They just think it’s a headache or upper respiratory, or just allergies. If we can catch it at that point, we could prevent it from traveling to their household and into the schools and communities. It is early detection.”

Long waits for appointments or walk-in tests have been reported at nearby locations. Some Glen Cove residents said they were grateful that the testing site is closer to home and that it’s easier to schedule a test.

After receiving her negative results at the stadium, resident Kerri O’Neill bought the entire Advanced Cardiovascular Diagnostics staff working the site breakfast to thank them. “This is great,” O’Neill said. “You don’t have to get out of your car. It was quick, easy . . . and was convenient. This was an asset to our community.”

The first wave of the coronavirus, in March 2020, pushed Frankel’s husband, Dr. Perry Frankel, founder of Advanced Cardiovascular Diagnostics, to transform his cardiac screening buses into the first line of defense against the virus. His medical team became a triage unit for hospitals that were overloaded with cases.

“We have these buses that we could bring to sites where there’s not access to care,” Frankel said. “People are still having heart attacks. It’s still one of the leading causes of death in America . . . This is what we signed up for when we became health professionals.”

While Frankel’s team has not been using his transportable cardiac screens on the buses since their effort to battle Covid began, they have provided testing to 94 schools and communities in New York state and Florida. Frankel said he would continue to offer the service in Glen Cove as long as it is needed.