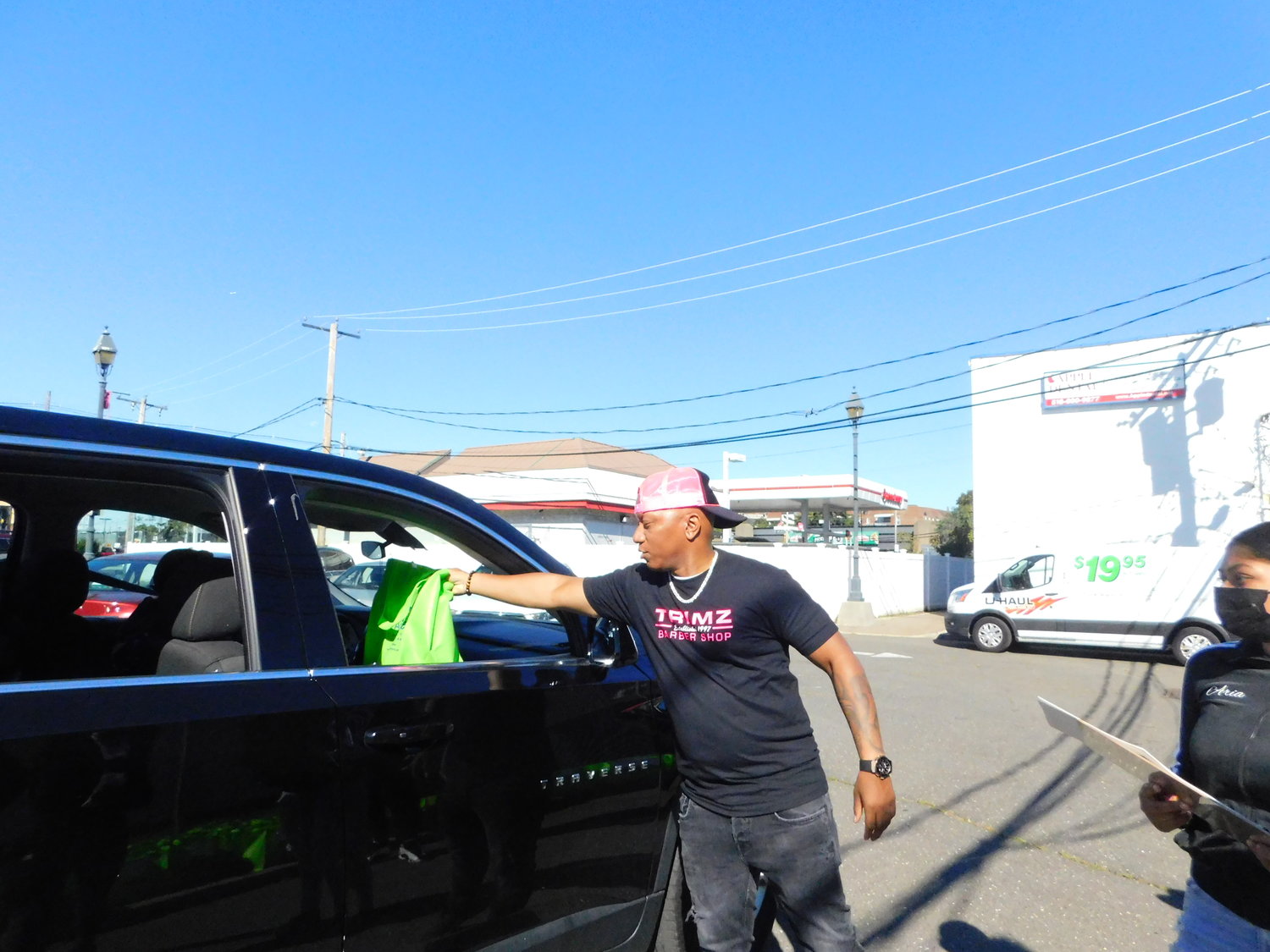 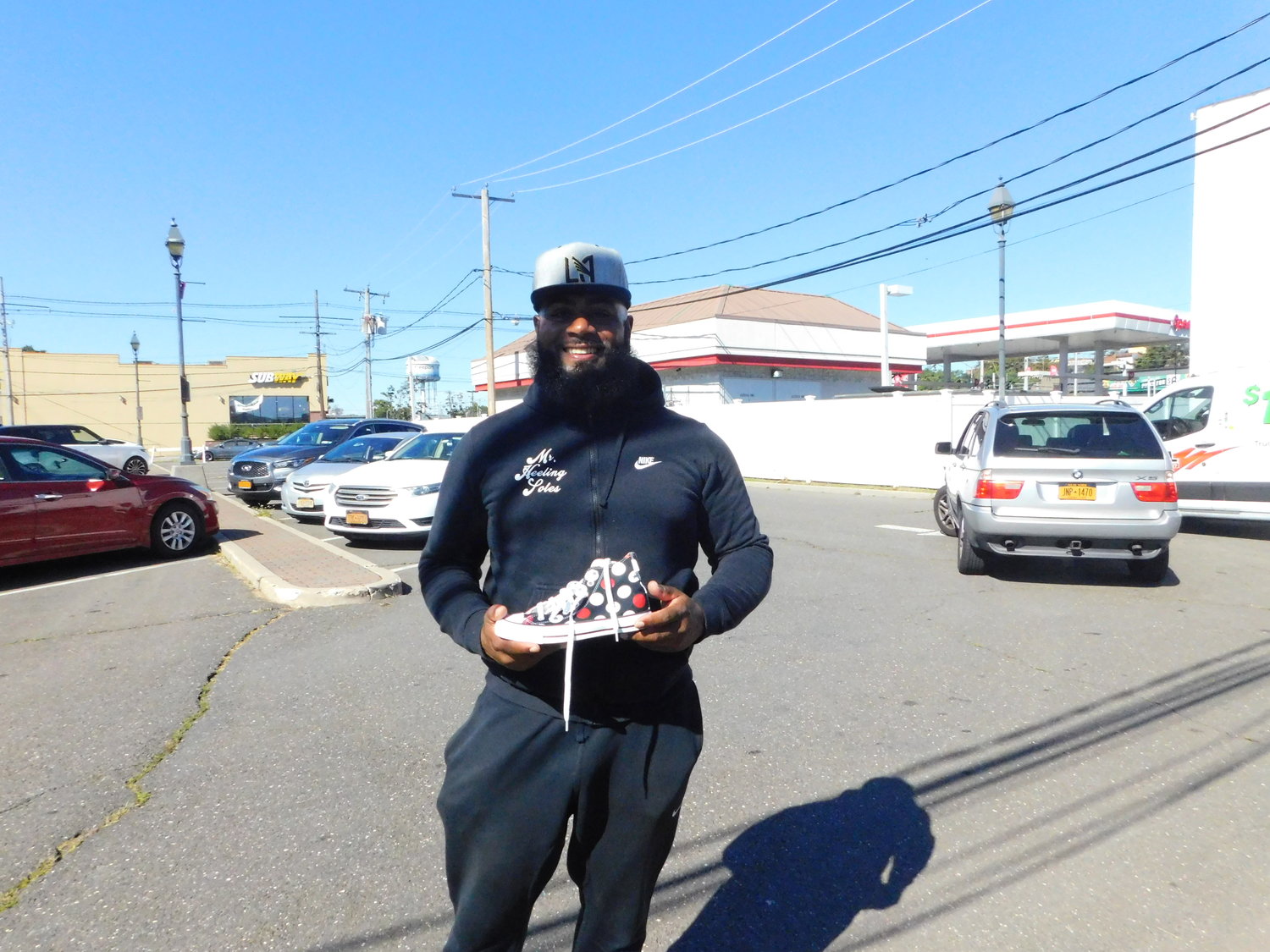 Steve Muir displayed an example of the sneakers that he donates through his Uniondale firm, Heeling Soles.
Reine Bethany/Herald 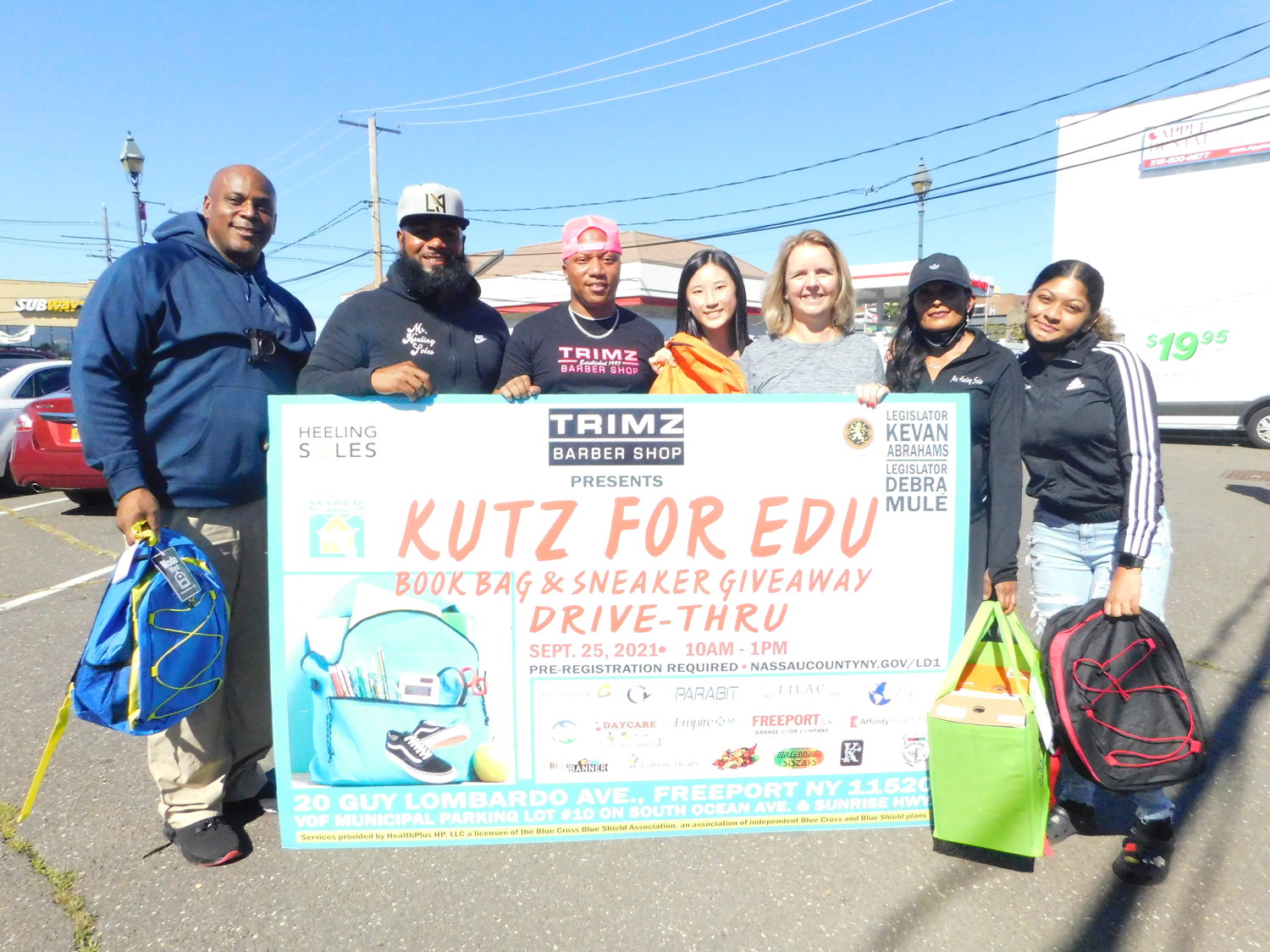 If you make money on the community, you've got to give back to the community.”
Leon Levar Broughton, Trimz Barber Shop owner
By Reine Bethany

Leon Lavar Broughton put his Freeport education to good use when he established Trimz Barber Shop, at 20 Guy Lombardo Ave., 24 years ago. But his school days also showed him that young people can be hard on one another, and 15 years ago, he decided he should act on those memories.

“Growing up here and seeing kids get bullied when they didn’t have the cool bookbags and the sneakers and the haircuts,” Broughton said, “I said, you know what? Let me try to do something so I can kind of put a stop to that.”

Broughton organized a day — “Kutz for Edu” — when he gave free haircuts, bookbags and sneakers to families. He footed the entire expense.

“That’s how it starts,” he said. “You’ve got to put your hard-earned money out. I have a community-based shop, and if you make money on the community, you've got to give back to the community.”

Broughton was not alone for long. His endeavor caught the attention of Nassau County Legislator Kevan Abrahams, and later, Legislator Debra Mulé, who stood behind him. Local businesses, too, put a hand in, and other charitable foundations did, too.

“On average, depending on the event size, we give out 75 to 100 pairs of sneakers per event,” Muir said. “We reach out to institutions like Bethpage Credit Union and a lot of different funding organizations.”

“We do it as a family thing,” Aria said. “We take inventory, we go through the stores and pick up the shoes, tag them, tie them together, get them all in bags to take to events.” Kutz for Edu is a yearly favorite for the Muirs.

Another charity organization that responded is Long Island Laboring Against Covid-19, or LILAC. Its founder, Sabrina Guo of Sysosset, was 14 when she heard New York City Mayor Bill de Blasio announce in March of 2020 that the city’s hospitals would run out of masks within a week..

“I thought, these people need PPEs just to survive,” Guo said. After consulting with her parents, she donated award money she had won in contests, plus thousands of dollars from her college tuition savings, to buy personal protective equipment for front-line workers.

“I think the fact that I donated that much really garnered support from people all over the communities,” Guo said. “They were saying, hey, if a 14-year-old could do it, then we can donate too.” LILAC gave 3,150 masks and $1,000 to Kutz for Edu.

Broughton pointed to a large poster advertising Kutz for Edu. The poster listed more than 20 donors and participating organizations.

“Everybody loves it,” he said. “All the names on that flier are people that partner with me. That list changes all the time. It gets bigger and bigger each year.”

Broughton looks forward to the end of the pandemic.

“This is small compared to what we usually do because of Covid,” he said. “Normally, we have food, we have bouncy houses, we have clowns, face-painting, hair-cutting, music … but we don’t want to create a super-spreader.”

Still, he sees the growth of the event as an ongoing process.

“It grows every year,” he said. “This is beautiful.”