Peaceful music on the Nautical Mile

An enchanting evening of jazz and djembe 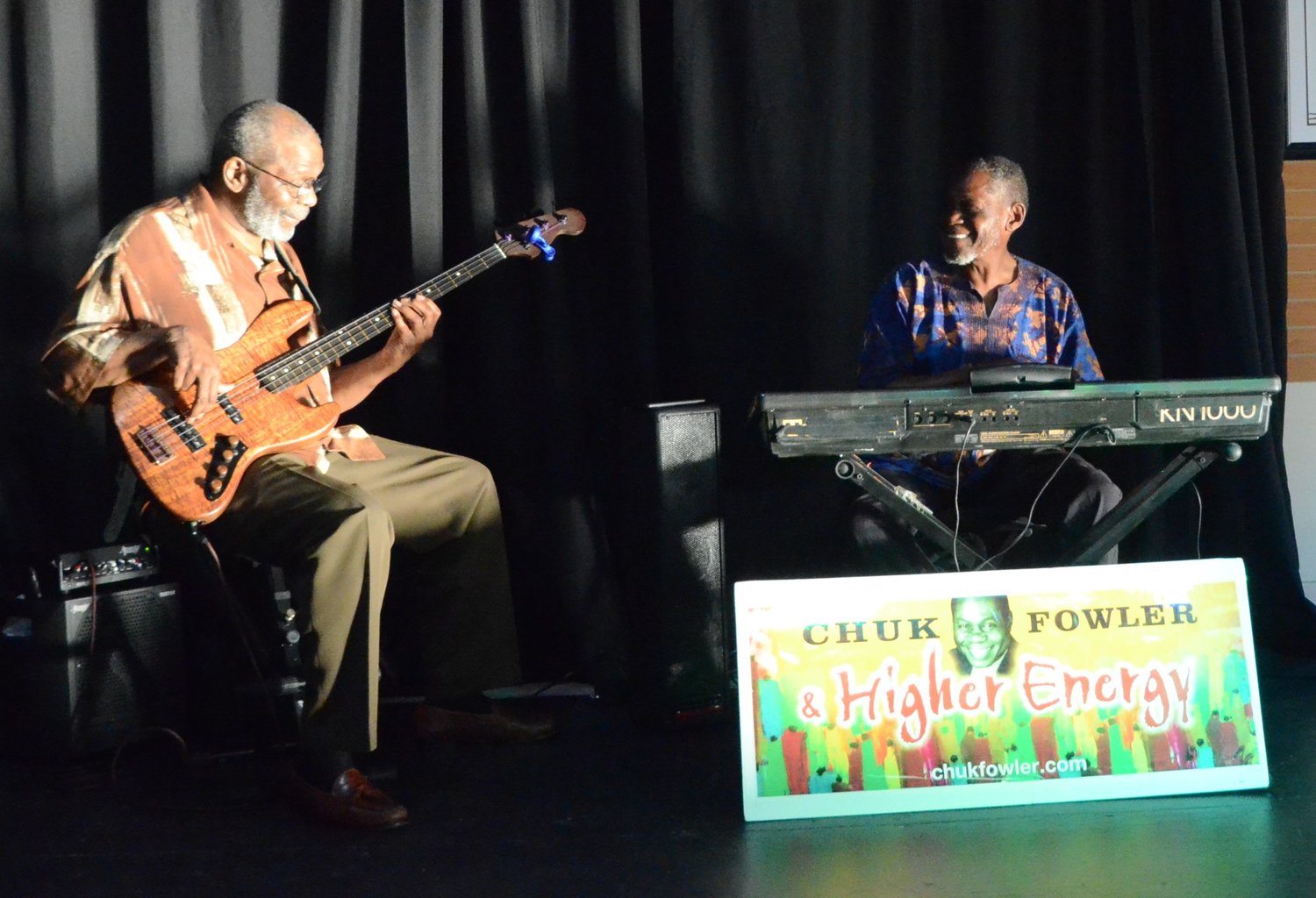 Paul Ramsey, left, and Chuk Fowler drew their audiences into a cloud of welcoming sounds at the Sparkle on Stage Cultural Arts Center, where they perform every Wednesday night.
Courtesy Galvin Bisserup 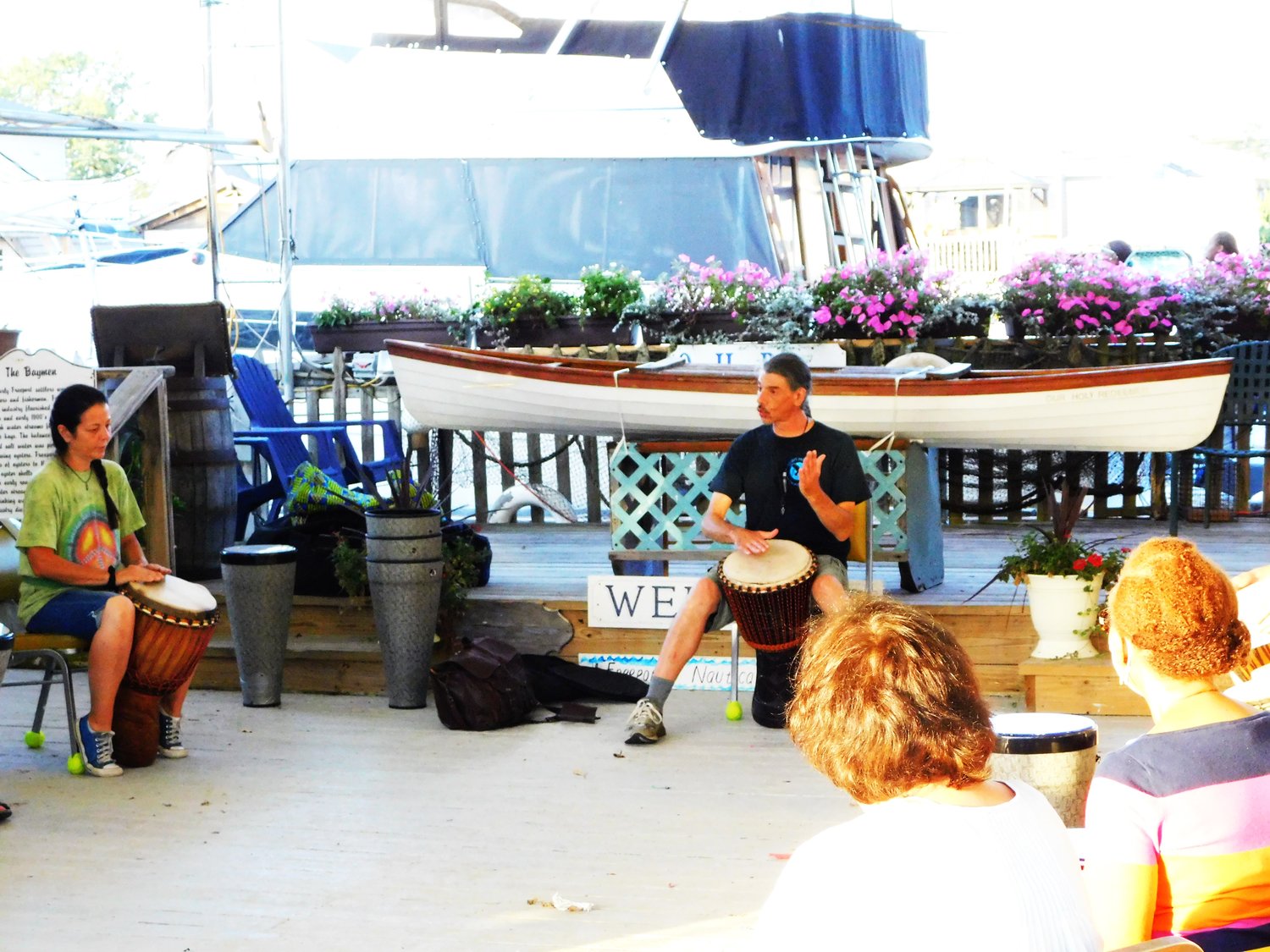 George Schultze, center, guided a circle of djembe novices through an evening of rhythmic discovery on the Nautical Mile in the event space next to the Sparkle on Stage Cultural Arts Center.
Reine Bethany/Herald
Previous Next
By Reine Bethany

On a night of musical coincidence, visitors to the Nautical Mile could choose between hearing polished jazz flowing from the fingers of Chuk Fowler and Paul Ramsey, or joining a tranquil hour of djembe drumming with George Schultze.

Keyboard artist Chuk Fowler is a master musician whose name is inseparable from the New York metropolitan area jazz scene. The same is true of his musical partner for the evening, bass guitarist Paul Ramsey. Both are part of Fowler’s group, Higher Energy, and its subgroup, the Chuk Fowler Trio.

The two performed in the Jewel Box Theatre at the Sparkle on Stage Cultural Arts Center, 195 Woodcleft Avenue, as they do every Wednesday at 7 p.m.

“We are here to celebrate with you,” Fowler told his audience. “I think they call it — life. Enjoy! ”

He began a lively improvisation on his electric piano, creating a breeze of music that danced nimbly through the electronic drumbeat he had set into motion. His stream of notes augmented the drums one moment, and in the next, rounded the edges of the beats with the fine tracery of his fingers across the keys. One could easily imagine people swing dancing on a meadow, or moving across a gleaming dance floor while a mirror ball tossed rays over shimmering dresses and suits.

Ramsey sent a rumbling counterpoint of bass melodies into the stream, completing the musical rainbow and carrying the listeners into another landscape.

When the two brought the music to a pause, Fowler introduced himself and Ramsey: “From the deepest part of my heart, my friend and fellow musician, Mr. Paul Ramsey. Yours truly, Chuk Fowler. And I’d like to make a request: a special tribute to yourselves for being here.” The audience laughed and applauded.

A voice calling out instructions, followed by drumbeats, sounded faintly from the event space next to Sparkle. George Schultze was guiding a diverse ring of attentive listeners into an hour of discovery on the simple, unendingly versatile instrument known as the djembe drum.

From his Freeport-based firm, Spirit Sky Drum, Schultze takes the magic of djembe throughout Long Island, into New York City and New Jersey. He is well known to performing groups as well as to libraries (especially in Freeport), senior homes, hospitals, and schools.

As Schultze summoned the beats from the hands of his listeners, Fowler smiled.

“Got some djembes in the house,” he said. “We do that, too.” He made a new selection from his keyboard.

A relaxing roll of drum brushes stroking a brass cymbal filled the room, with a soft-shoe accompaniment from an unseen snare. Chuk’s fingers sent notes looping and swirling around the beat. Ramsey’s bass supplied a thrumming meditation reaching from the bass’s lowest to highest notes. An invisible trumpet played variations of “Wash that Man Right Outta My Hair,” while the keyboard and the bass guitar rocked the audience into an exhilarating cradle of sound.