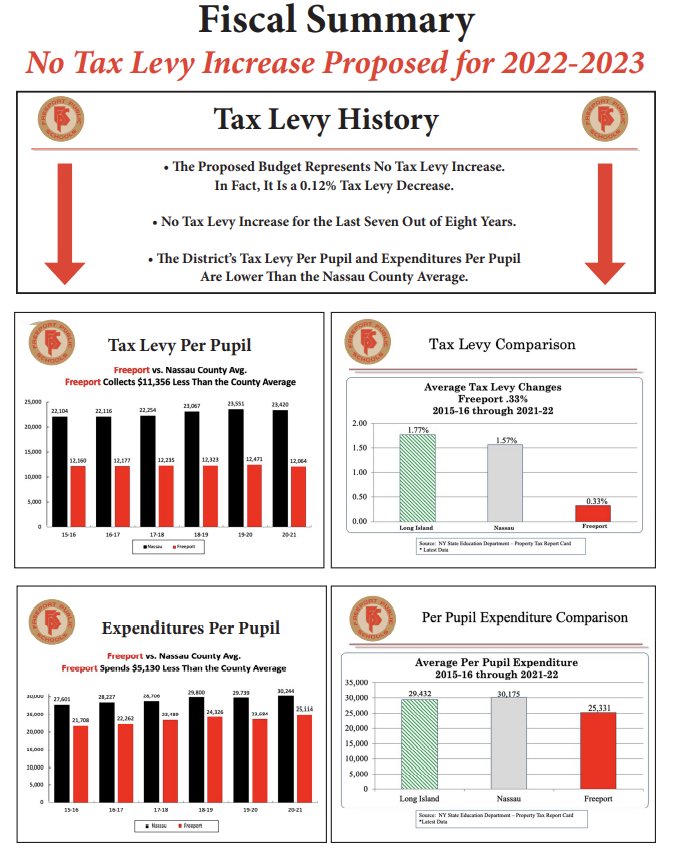 The Freeport Board of Education published a diagram to help taxpayers visualize important aspects of this year’s budget.
Courtesy Freeport Public Schools

Our assistant superintendent for business, and our superintendent, work on this budget all year.”
Maria Jordan-Awalom, school board president
By Reine Bethany

For the seventh year out of the last eight, Freeport property owners will see their school tax levy drop slightly from the year before.

The proposed budget adopted by the Freeport Board of Education on April 12 will decrease, by 0.12 percent, the amount taxpayers will expend to support their public schools.

“We have been able to have reserve funds for unexpected, life-changing events like Covid,” said school board president Maria Jordan-Awalom, “where we were prepared to take on challenges, continue programs, continuing hiring and appointing staff, because we did have a fiscally responsible budget.”

Even though the Freeport school system daily faces the challenges posed by 7,100 students, both the amount of money collected and the amount spent, broken down per pupil, are substantially less than the county average.

Examples of capital projects, said Jordan-Awalom, are upgrades to the ait-conditioning and ventilation units throughout the district, as well as improvements to operations and maintenance of the buildings.

“We’ve been working on the Atkinson field,” said Jordan-Awalom, referring to the broad green expanse behind and on the east side of Caroline G. Atkinson Middle School. “A lot of the capital component is for that. It’s being developed for better usage for the students. There’s going to be a small turf space for hopscotch and games, and basketball hoops. We used to have portable classrooms there, which are no longer there, so that gave us a lot more space.Another improvement at Atkinson has been planting trees along the fence at the eastern edge of the schoolyard, obscuring the view of the school buses filling the parking lot on the other side of the fence.

“If the kids feel proud and they like going to school,” said Jordan-Awalom, “it changes how they feel every day.”

Although the Freeport school district expects a $15 million increase in state Foundation Aid, and federal funding can reasonably be expected as well, the proposed budget is not prepared with potential aid in mind.

“We have to approve a budget before we get the federal funding, Foundation Aid, state aid,” Jordan-Awalom said. “We still have to be prepared to have a sustainable amount of funding regardless of whether we get funding or not. Our assistant superintendent for business, and our superintendent, work on this budget all year.”

She also noted that during the Covid-19 pandemic, when expenditures rose to change ventilation systems and provide personal protective equipment for staff and students, as well as handle the technology required for remote learning, the reserves of the Freeport district allowed the board ot keep the tax levy flat, even while other school districts were forced to raise theirs as much as 4 percent.