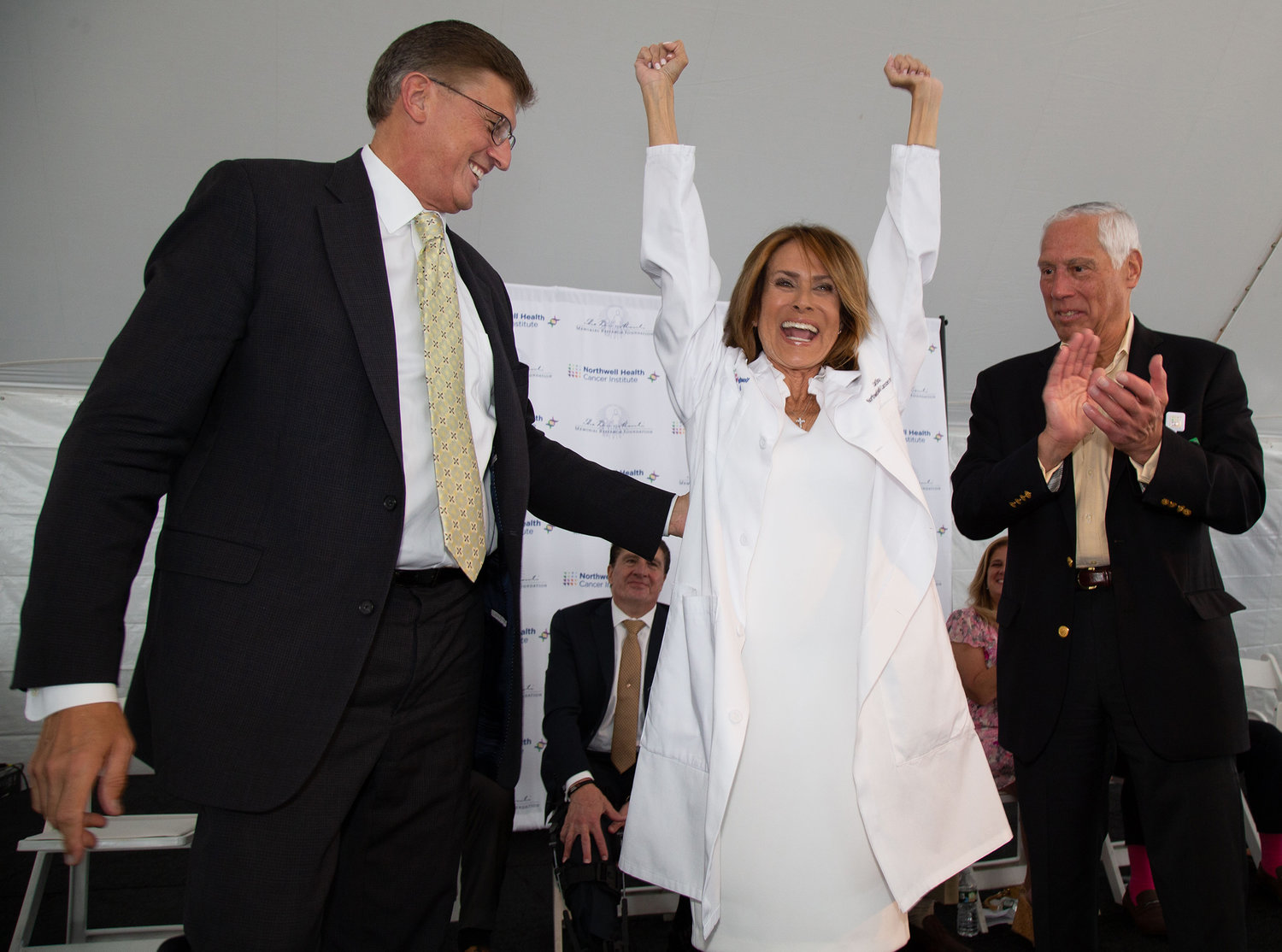 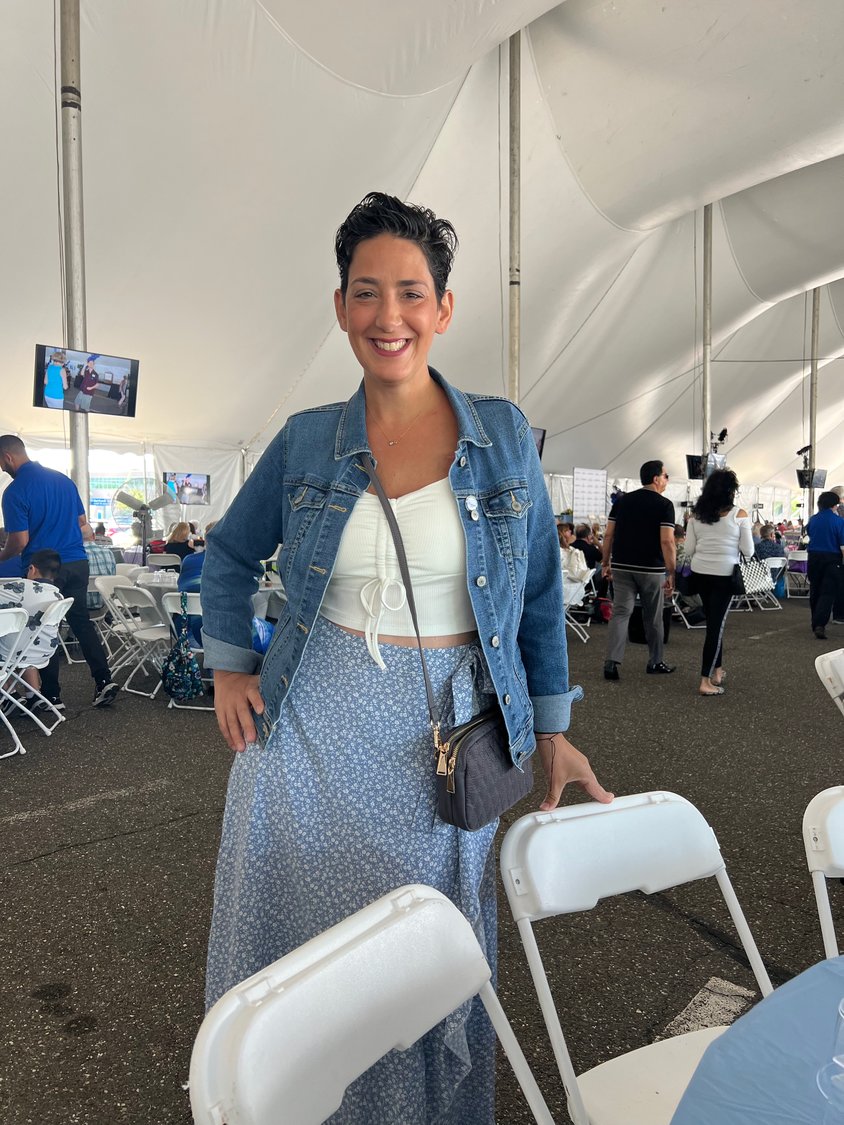 Erica Ferrara has been cancer-free since October 2021. She celebrated Cancer Survivor’s Day at Monter Cancer Center with her sister Stella Shank.
Courtesy Stella Shank
Previous Next
By Letisha Dass

Former News12 anchor Carol Silva, a longtime resident of Oyster Bay and one of the keynote speakers for the event, was diagnosed with Stage 4 lung cancer that had spread to her brain, where there were 12 more tumors, in September 2019, at age 65.

Silva lived a healthy lifestyle, had no previous medical history with cancer and was a nonsmoker, but after putting up with a pesky cough for about a year, she underwent multiple imaging tests at Long Island Jewish Medical Center. Later, at the Center for Advanced Medicine, she received her diagnosis.

Silva’s response to the news: “Thank you, God, for my healing.”

Her husband, Bob Reilly, said he was afraid.

“My mother had nine cancer surgeries and she had Stage 4 cancer,” Reilly said. “So when somebody says Stage 4 to me, it’s like death.”

But after hearing Silva utter that phrase, Reilly’s fear went away. “I stopped being afraid, because she’s not going to let this beat her,” he said. “Nothing beats this woman. This is going to somehow be a speed bump.”

Being a devout Catholic, and following the examples of her father, Tony Silva, who was a World War II medic with the First Marine Division, and her mother, Carol Silva, whom her daughter described as a fighter and a giver, Silva maintained a positive outlook.

“I grew up with a positive nature, because that’s what I’ve been exposed to,” she said. “And so my life as a cancer patient was just the same.”

Silva underwent surgery to biopsy the tumor in her lung, radiosurgery in her brain, and stereotactic body radiation therapy for her lungs. After 51 weeks of treatment, she was cancer-free, and two years and eight months after her diagnosis, she still is.

Her advice for fellow cancer patients is to be careful what you consume, especially when it comes to what’s on television, because, she said, “It’s easy to consume too much bad news.”

“I’m more than a 40-year journalist, and I say, turn the TV off [and] watch some comedy,” Silva said. “It’s good for the soul. Be careful what you choose to repeat to yourself.”

Erica Ferrara, of Farmingville, who has worked at the Regency in Glen Cove for the past 20 years, also took part in Cancer Survivor’s Day. Ferrara was diagnosed with Stage 2 breast cancer in April 2021, after a routine mammogram at Pure Mammography in Smith Haven.

“Just by chance I was going,” Ferrara, 42, recalled. “I was still very young. I didn’t feel anything. And they kept calling me, because I kept missing my appointments. So I finally went.”

Ferrara, the first member of her family to be diagnosed with cancer, was shocked by the news. “I would have never in a million years thought it would happen to me,” she said.

She went through 16 rounds of chemotherapy, a double mastectomy, and reconstruction at Northwell Cancer Institute in Greenlawn. Ferrara said she lost her hair, her eyebrows, and even her eyelashes while going through treatment.

But, like Silva, Ferrara maintained a positive attitude. Her source of strength was her children. “I think attitude is everything,” her sister, Stella Shank, the Regency’s executive director, said. “She has such a positive attitude, and really kicks cancer’s butt.”

Because of Covid protocols, family members could not be in the room with Ferrara when she started her treatment. So Shank parked her car near the treatment area’s window, to be there for her sister. “She’s parked herself outside the window of chemo with her car, waving while I was getting treated,” Ferrara said.

Ferrara has been cancer-free since last October. She said that her story has encouraged her friends to get routine screenings. “It might be an inconvenience to go get your mammogram,” she said, but in the grand scheme of things, if you could catch something early, you’re saving your life with an hour appointment.”

Shank and Reilly have similar advice for patients’ families. They both encourage them to rally around the patient and maintain a positive outlook to help their loved ones through their battles.

“Pray, and just fill your world with positive thoughts,” Reilly said. “Even if you have depression in your own world, don’t let that leak out to the patient. The patient’s going through enough as it is. They’re confronting their mortality.”