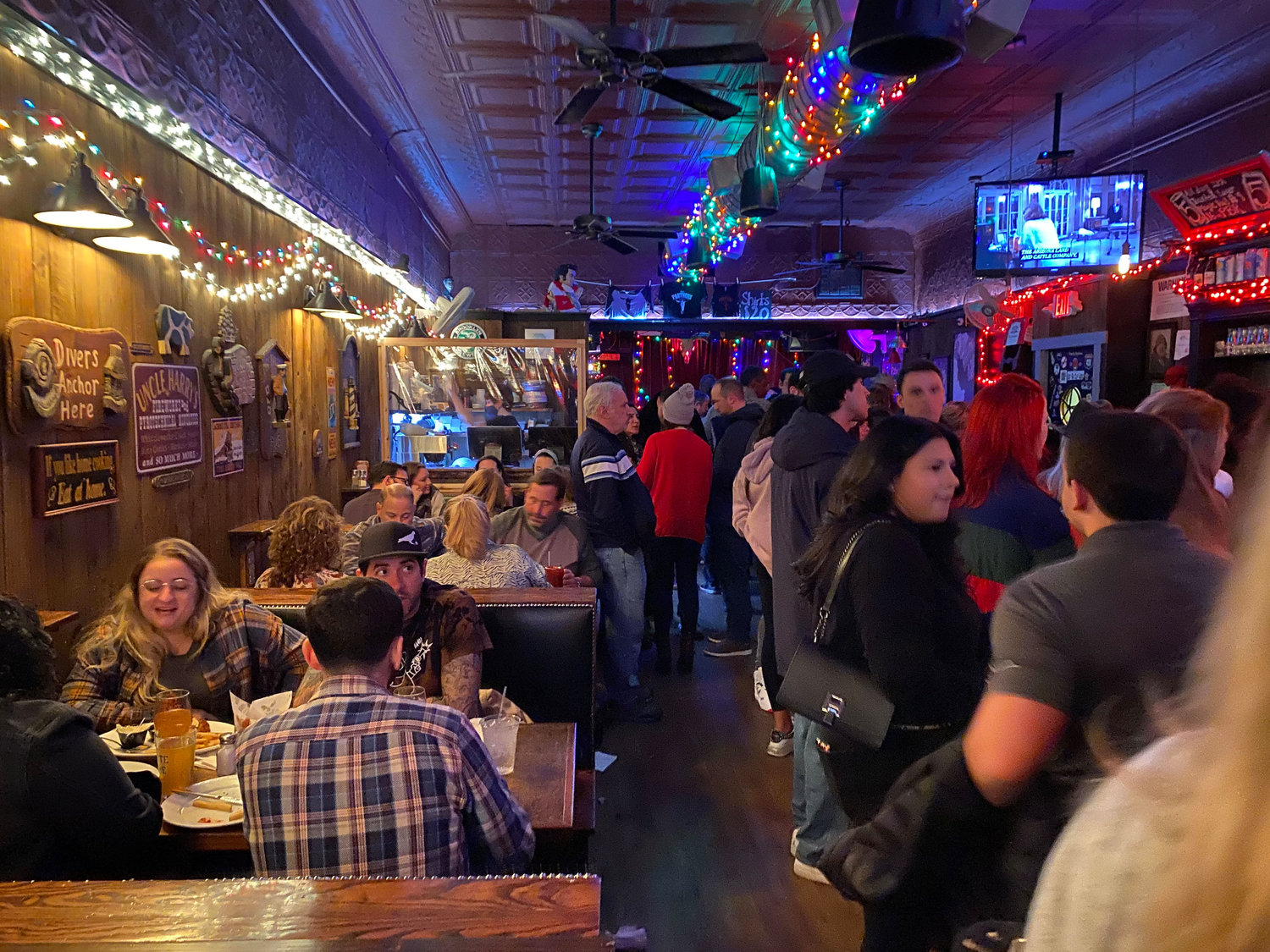 Still Partners was the last stop for many of the bar crawlers.
Will Sheeline

The coalition brings a sense of community pride into everything they do.”
Robert Zimmerman Owner, ZE Creative Communications
By Will Sheeline

A bit of normalcy not seen since the days before Covid returned to Sea Cliff last Friday, as locals hit the streets, chatting and drinking their way around the village in a poker-themed bar crawl.

Crawl for a Cause, an annual event, is organized by the village’s Coalition to Save Hempstead Harbor. A local nonprofit, the coalition was founded in 1986, and is dedicated to identifying and eliminating environmental threats to Hempstead Harbor and the surrounding communities.

Among its many community services, the organization tests water quality, improves habitat with small-scale plantings, and generally raises awareness of ecological issues in the harbor and Long Island Sound. In 2018 it received the Environmental Impact Award from the New York State Outdoor Education Association.

The bar crawl was founded in 2008 by the Sea Cliff Beach Committee, but 10 years later the coalition took on the leadership of the event, and it has been organizing it ever since.

Last year’s crawl was canceled because of the coronavirus pandemic. “It’s nice to see everybody out again,” said Elaine Neice, office administrator for the coalition and one of the main organizers of the event. “After the winter, not to mention the pandemic, it’s like people are coming out of hibernation.”

Crawl participants made their way along Sea Cliff, Central and Roslyn avenues. Tickets were $40, and could be used for one free drink or side dish from each of the five bars and restaurants that took part. In an industry that has been weakened more than most by the pandemic, owners of KC Gallagher’s, Onion Tree, Il Villagio, Metropolitan Bistro and Still Partners were happy to open their doors to the village.

His wife and co-owner, Anita Long, agreed. “We haven’t seen a lot of people, period, during Covid, so it’s nice to see people out and having fun,” she said.

In addition to the traditional bar-crawling activity, the event also featured a poker-themed rally. To participate, crawlers could visit any of six small businesses in town, which stayed open late. After speaking to the store owners, the crawlers were given poker cards. Whoever ended up with the best hand at the end of the night won a quarter of all the money raised. Another quarter went to the coalition, while the remaining half went to the participating businesses.

“It’s been nice to see a lot of new faces here tonight,” Luca Williams, owner of the record store Moonshot Emporium, said. “We made some sales, too, which is always good.”

Kimberly Frost, co-owner of Frost Ceramics, said that if the bar crawl brought people out, that was a good thing. “I think it’s part of the idea that we’re getting through Covid,” she said, “and that we can be a community together, and to support a great cause.”

Salon Solis, K. Diresta Design, My Beautiful Mess and Trois Jours Boutique were the other stores that took part in the event.

There were roughly 80 crawlers, and many of them hit all five bars. Donald Kavanagh, of Sea Cliff, said he had taken part every year since the crawl started, as did his friend Dan Fagin. “There’s a great spirit this year,” Kavanagh said. “We’re trying to hit all the stops … there’s a lot of small businessmen and women in Sea Cliff, and we want to support them too.”

Robert Zimmerman, owner of ZE Creative Communications and a candidate in the race for U.S. Rep. Tom Suozzi’s seat, said the event was important. “The coalition brings a sense of community pride into everything they do,” Zimmerman said. “The pub crawl is bringing people together, while supporting local businesses and helping protect our environment.”

Most of the crawlers ended the evening at Still Partners, to enjoy drinks and live music and to put winter, and hopefully Covid, behind them.