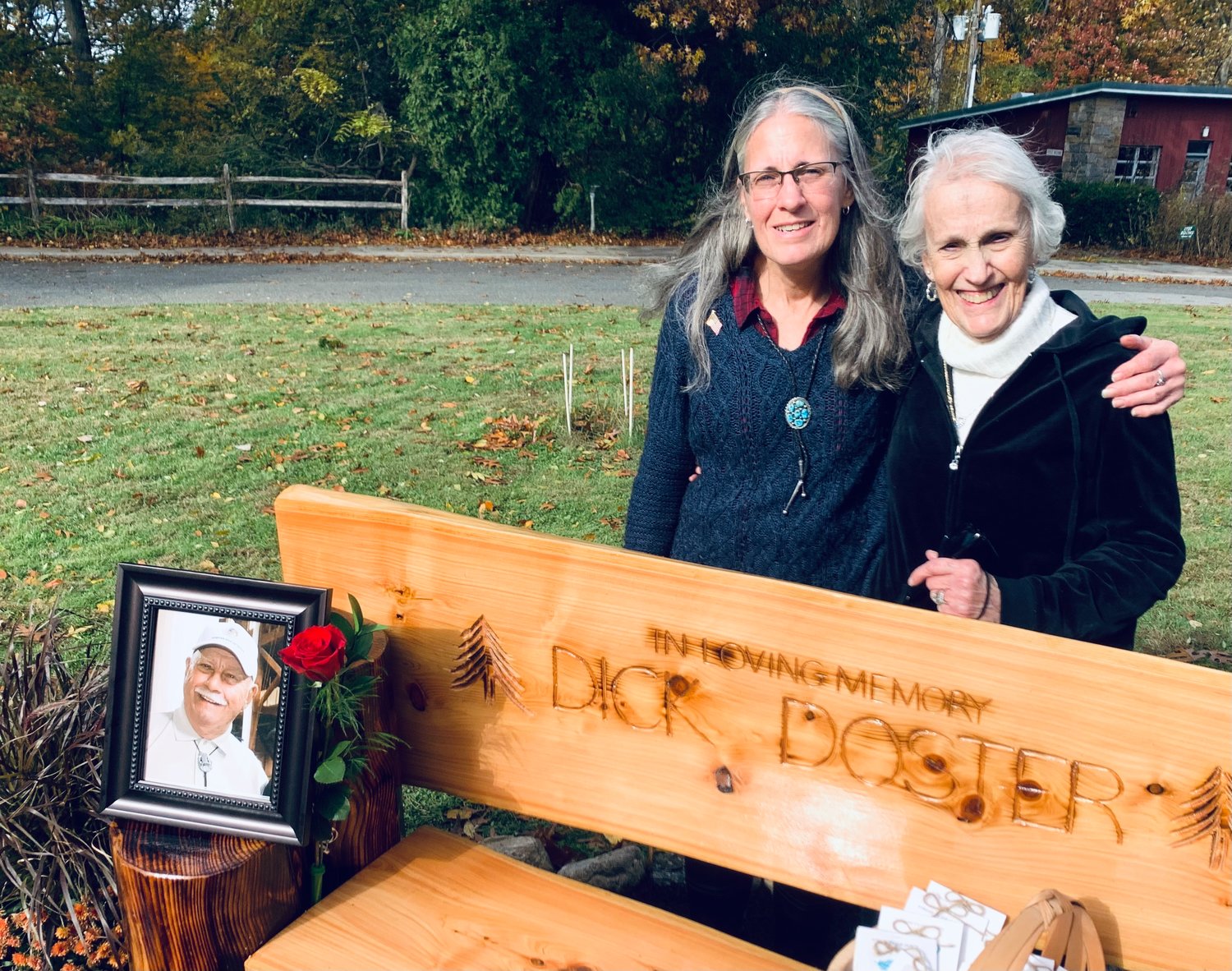 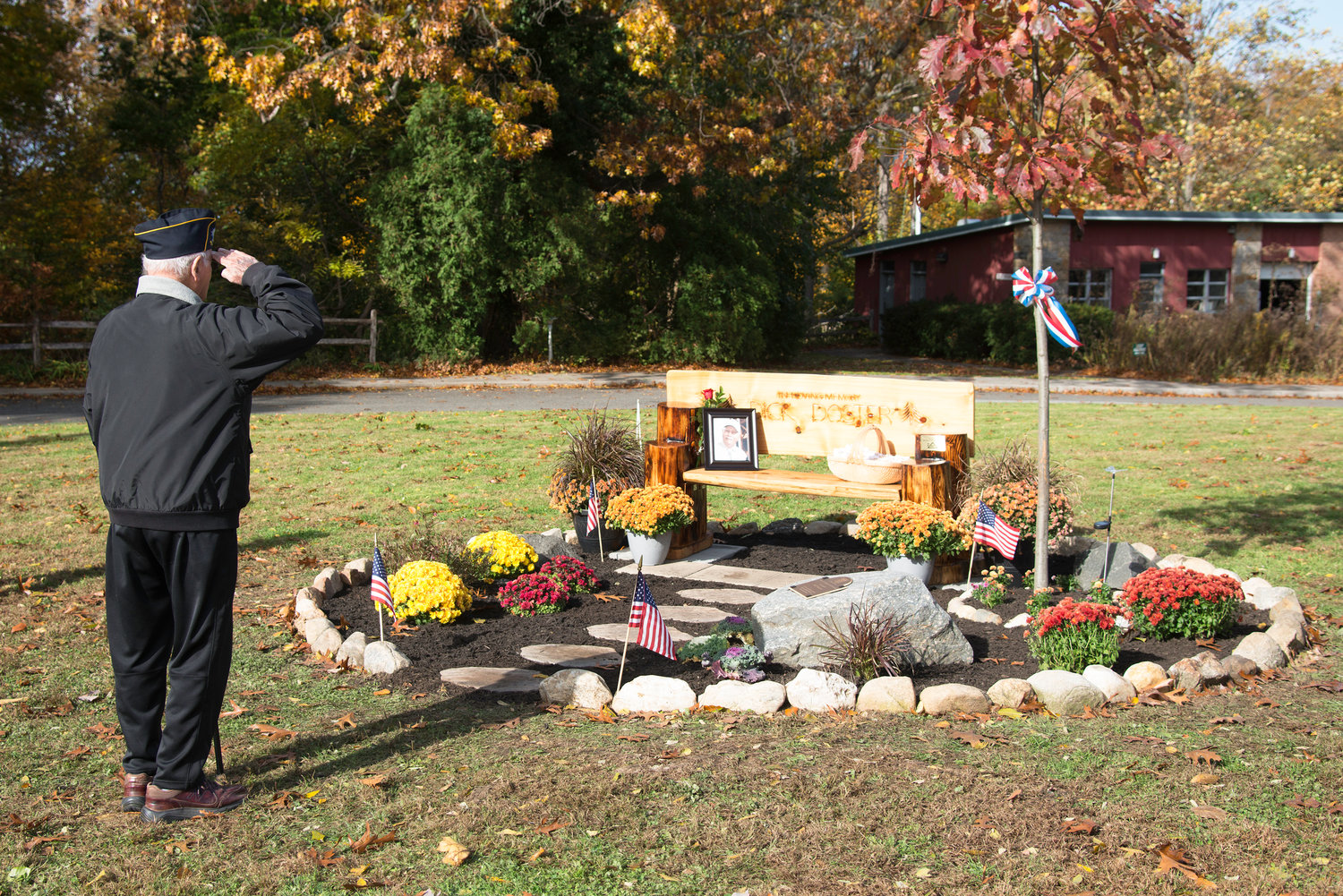 A veteran saluted the memorial to Richard Doster, which includes a red oak tree, a bench and flowers.
Courtesy Gill Associates Photography 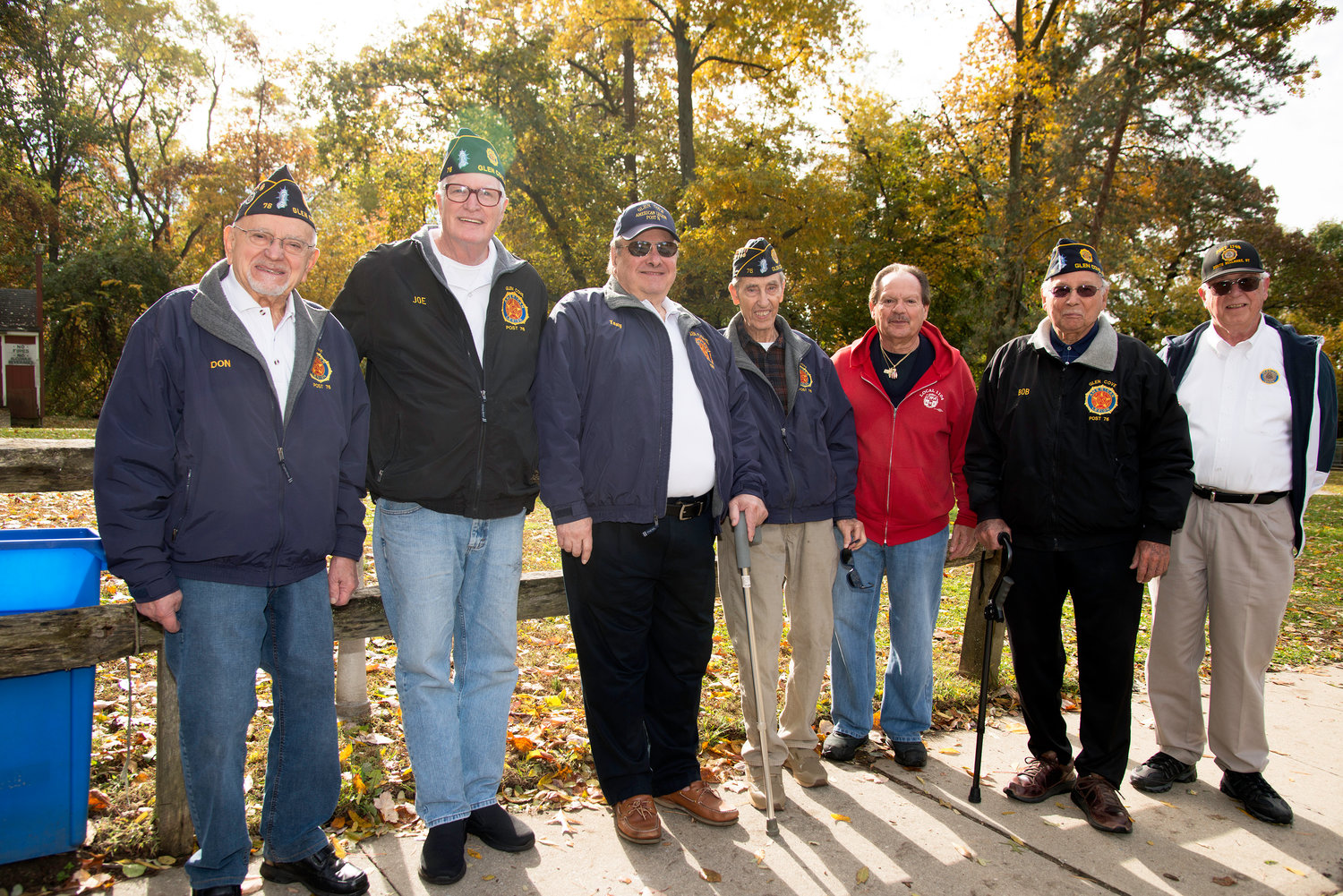 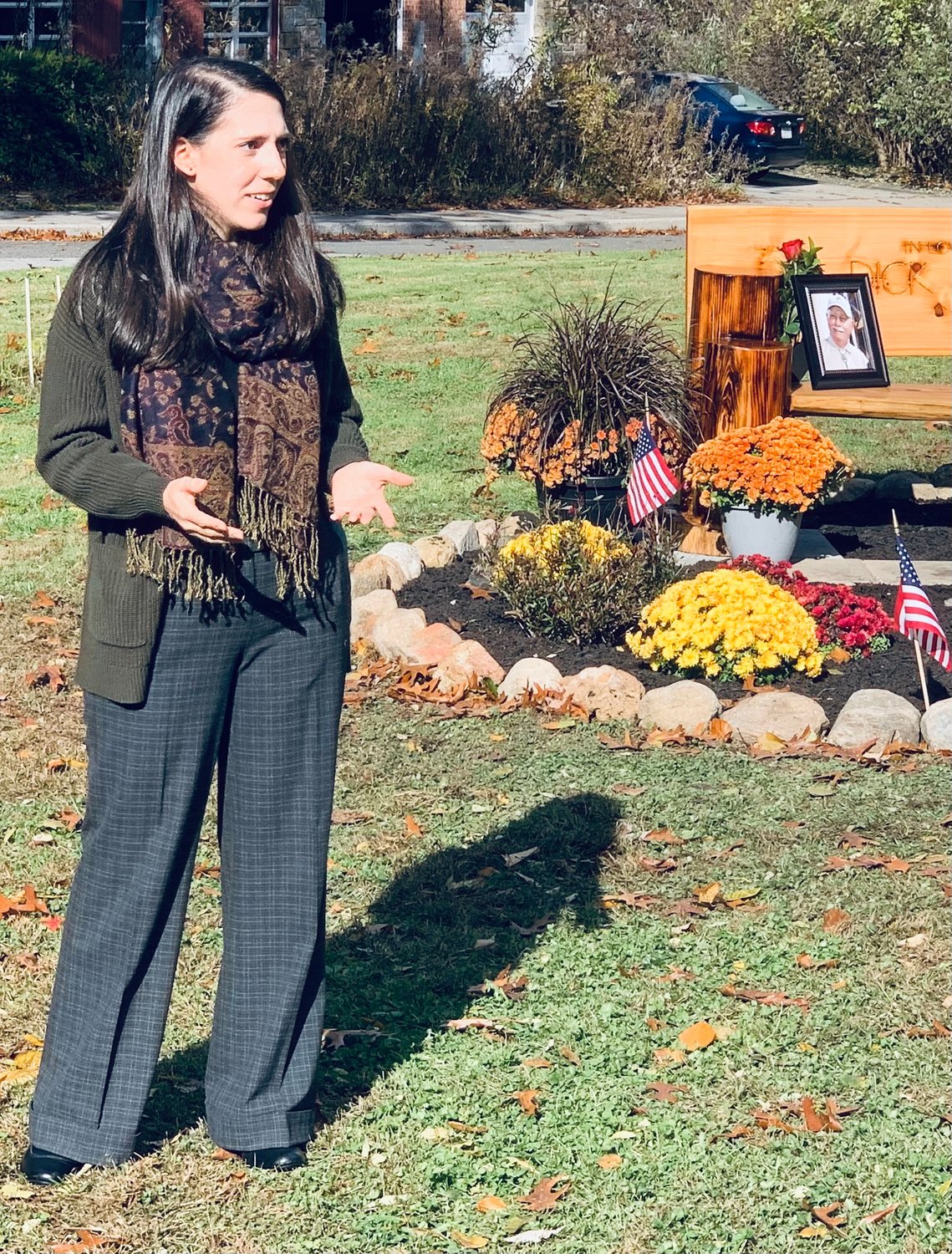 In his retirement, Richard Doster dedicated his time to ensuring the trails were safe and clear for hikers at Garvies Point Museum and Preserve in Glen Cove. He spent so much time there, in fact, he had his own office in the red shed in front of the museum, a place he cherished until his death on May 1, 2020. Last month, his longtime commitment to the preserve was recognized with a memorial service and bench dedication in his honor.

A resident of Wantagh, Doster volunteered for the Nassau County Department of Parks, Recreation and Museums, which includes Garvies Point Museum and Preserve, for more than 30 years, one of many of his active volunteer pursuits over the course of his lifetime. Doster served in the Korean War and was telephone lineman for 37 years. He started volunteering with the Telephone Pioneers in 1972 and the Sagamore Life Member Club of the Paumanok Chapter of the Pioneers in 1996. He served as president of the club for 10 years and was the environmental project director, overseeing projects such as repairing bridges and maintaining trails at various North Shore preserves, including Tiffany Creek Preserve, Muttontown Preserve and Welwyn Preserve

“The volunteer project closest to his heart was Garvies Point,” his daughter Linda Notarnicola said. “He was the project director for the restoration of the north pond, now referred to as Pioneer Pond, installed a new drainage system and overflow, built a teaching deck, cut new trails, bridged over wet areas, put up split rail fencing and maintained five miles of trails.”

Doster’s active volunteerism earned him the Volunteer of the Year award, Nassau County Senior Citizen of the Year award in 2003 and induction into the Pioneer Hall of Fame in 2010 – the most prestigious award bestowed upon a Pioneer, according to Notarnicola.

He was a member of the retiree Executive Board of CWA Local 1104, a supervisor of the Long Island Fair, and helped organize blood drives across Long Island. He not only organized the blood drives, but he also regularly donated blood, according to is daughter, which earned him membership in the Golden Donors. Doster’s volunteerism extended to helping those in need: he collected books for the veterans at Northport VA, clothing and food for the homeless, aluminum can tabs for a camp for children with kidney disease, collected eyeglasses for the needy, and delivered back packs with school supplies for needy children.

“He was just helpful,” Peter Notarnicola, Doster’s son-in-law, said. “When you needed help, he was there.”

When Doster died early on in the pandemic, the family was not able to give him a proper farewell.

“He was involved in so many organizations, and people couldn’t come to pay their respects,” Notarnicola said.

That’s where the Garvies Point memorial came in. “The union wanted to donate money to a cause that my father felt strongly about,” Linda said. “Garvies Point was his home away from home, so they decided to donate a tree.”

On Nov. 13, a memorial service took place in front of the museum, with family members, veterans and old friends and colleagues present. Linda and Peter planted a red oak tree donated by the in front of Garvies Point Museum, and the Pioneers donated a chainsaw carved bench made out of stumps. “The reason we chose that bench,” Linda said, “was because my dad’s job at Garvies Point was to go through the five miles of trails in the preserve and cut up any tree that had fallen down, and move them off the trails so the trails would be clear for people walking on them.”

The bench carved out of tree stumps is appropriate for that reason, she said. “It has a lot of significance. On the bench, there are trees, so it has a powerful message.”

In addition to the tree, the CWA Local 1104 donated a plaque in Doster’s honor in the center circle over looking the red shed that served as Doster’s "office." The Home Depot in Jericho donated all the plants, as the perennials that were planted there were out of season, Linda said.

“Dick maintained all five miles of our nature trails once a week and made it look easy,” Natale said. “He was a dedicated volunteer and always had a smile on his face. Dick’s personality can be summed up by his favorite coffee mug that reads, ‘The heart is happiest when it beats for others.’”

“Garvies Point was his home away from home, his little peace and quiet place, his go to happy place,” Linda said. “No matter what the weather or occasion, my dad went to there weekly to take care of his trails.”