‘Everyone can be who they want to be and love yourself’ 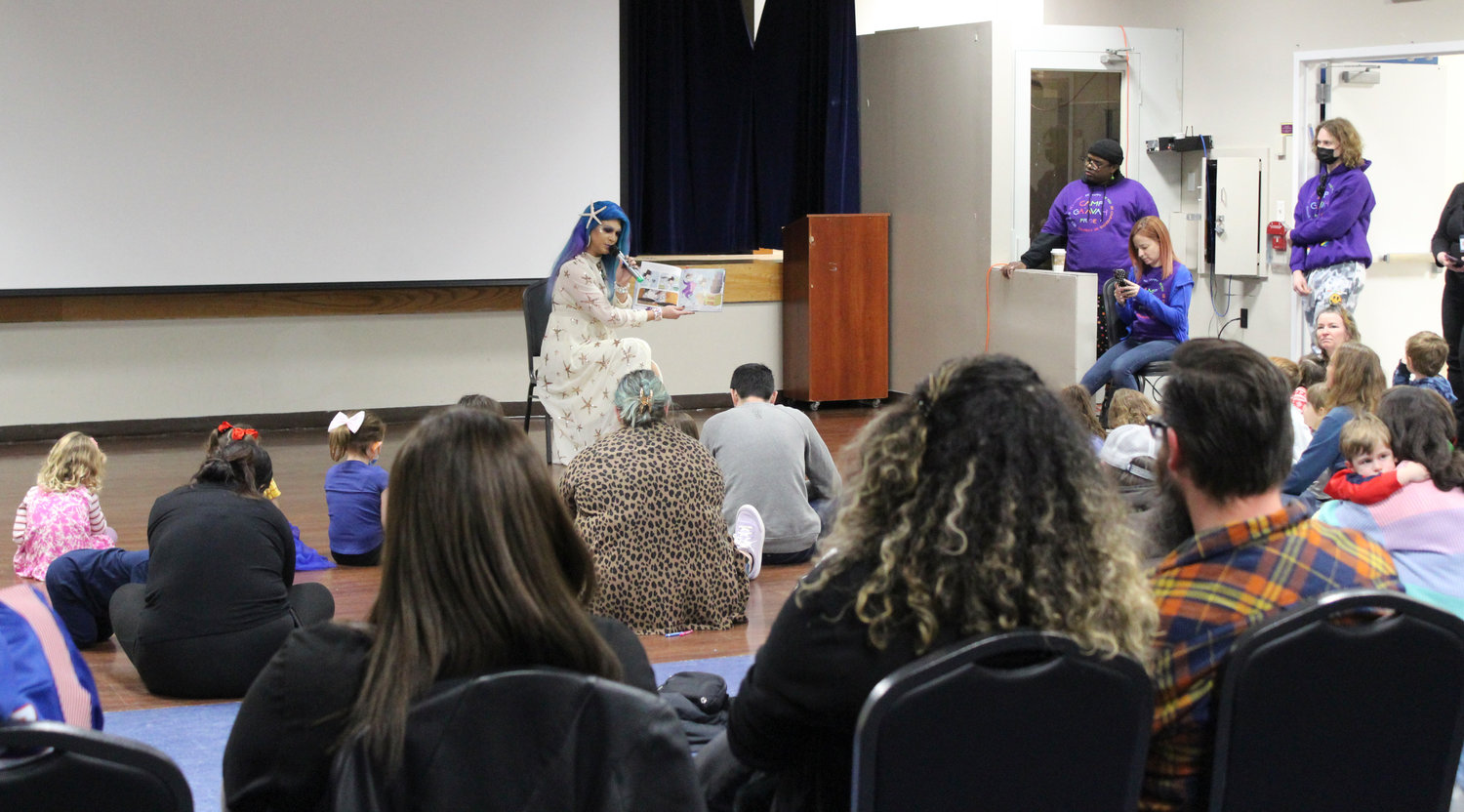 Bella Noche — whose real name is Isaiah Cruz — reads to children from the Drag Queen Story Hour library inside the Barry and Florence Friedberg Jewish Community Center in Oceanside, teaching kids to respect one another, be kind and love themselves for who they are.
Karina Kovac/Herald 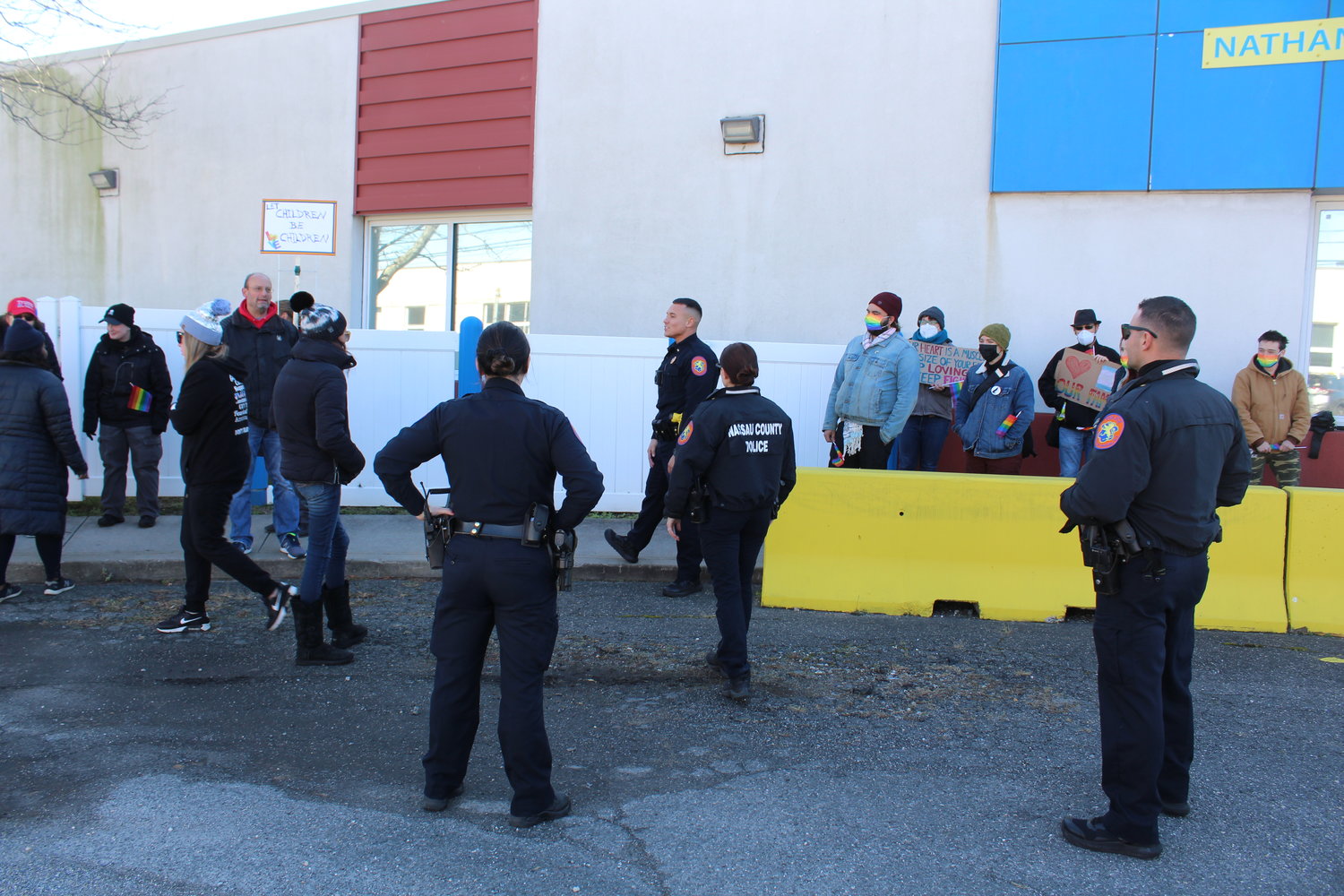 Protestors are spilt up by police in an attempt to de-escalate potential confrontations outside Barry and Florence Friedberg Jewish Community Center in Oceanside. Inside, Isaiah Cruz — performing as the popular New York drag queen Bella Noche — was reading a book to children.
Karina Kovac/Herald
Previous Next

I love doing this because I wish I had something like this when I was a kid. I want to be that example for kids.”
Bella Noche, chapter director Long Island Drag Queen Story Hour
By Karina Kovac

The lessons for the day? Self-love, kindness and acceptance. The teacher? A drag queen.

It was a special visit to the Barry and Florence Friedberg Jewish Community Center last weekend by the “mermaid of New York,” Bella Noche. There, decked out in her Sunday best, the popular performer read to children as part of Drag Queen Story Hour.

Started in 2015 in San Francisco by author and activist Michelle Tea, the idea of Drag Queen Story Hour promotes reading with a little bit of diversity and inclusivity mixed in. But while the kids gathered around Bella Noche were eager to hear what she was going to read, some protesting outside were not as thrilled.

Those gathered outside were evenly split between those who supported the storytime, and those who were against — with police in the middle.

“We’re all parents,” said Christine Chapman, who joined about a dozen others to protest Bella Noche’s visit. “We have no problem with gay, lesbian, (transgender), LGBT — that’s not the issue. It’s the issue they’re trying to push this on 6-, 7-, 8-year-old kids. You want to go to a drag show, fine. “but don’t feed it to kids.”

On the flip side, Luke Wollweber, Sean Harkins, and more than a dozen others held pride flags and signs in support.

“I just came to show our support,” said Wollweber, an Oceanside native. “I want people in my community to feel like they can live their lives however they want.”

“I mean, it’s just kind of absurd,” Harkins added. “It’s literally a storytime for kids. How is that so outrageous?”

Inside the JCC, Noche explained to the kids, who ranged in age from preschool to elementary, the many ways people can be kind to each other.

“Kindness is taking it upon yourself to do something nice for somebody,” she said. “It can be holding a door, giving a compliment, sometimes just giving a hug.”

After reading a book and playing a game of Simon Says, Noche opened the floor to questions about anything and everything. The burning questions focused on her shimmering star dress and mermaid accessories. Others asked where she gets her books from.

None of this is new to Noche, whose real name is Isaiah Cruz, and who’s been doing story hour for four years as the Long Island chapter director. But the people outside were.

“I can count on one hand how many actual protest times that there’s been, and so everything surrounding this one it was quite out of the ordinary to be honest,” she said. Noche needed extra protection on this particular trip, watched over by two security guards.

Yet, it’s not the first time protests have followed Drag Queen Story Hour. In fact, Nassau County’s first-ever storytime with a drag queen — held at the East Meadow Public Library in early 2019 with Bella Noche — also drew a couple-dozen protesters.

At the time, Noche — whose alter ego is a Manhattan native who studied journalism and creative writing at Hunter College, before working at the Generation Q LGBT youth center in Queens — said it was the first time she encountered such a reaction.

But even with the protests, Noche says she won’t stop reading to the kids. Why? Acceptance.

“I love doing this because I wish I had something like this when I was a kid,” she said. “I want to be that example for kids and tell them about like, not just necessarily the LGBT stuff — even though that is important — but just basic stuff like being kind.

“Everyone can be who they want to be and love yourself. I feel like those are lessons that aren’t always instilled at that age.”

Juliet Laor watches the popular reality competition show “RuPaul’s Drag Race” with her daughter, who calls the drag queens on the program “dolls.” Laor asked her daughter if she wanted to meet a doll in real life, and she jumped at the opportunity.

“We had a great time,” Laor said. “It was so much fun. We’ve never done one before. Very exciting.”

Sponsoring the event was Camp Ga’avah, an LGBTQ day camp for children and teens between 6 and 17. The camp creates a safe space open to all, including gender fluid, gender creative and gender questioning. Ella Diamond, the camp’s director, called Drag Queen Story Hour “important for kids to see different representation.”