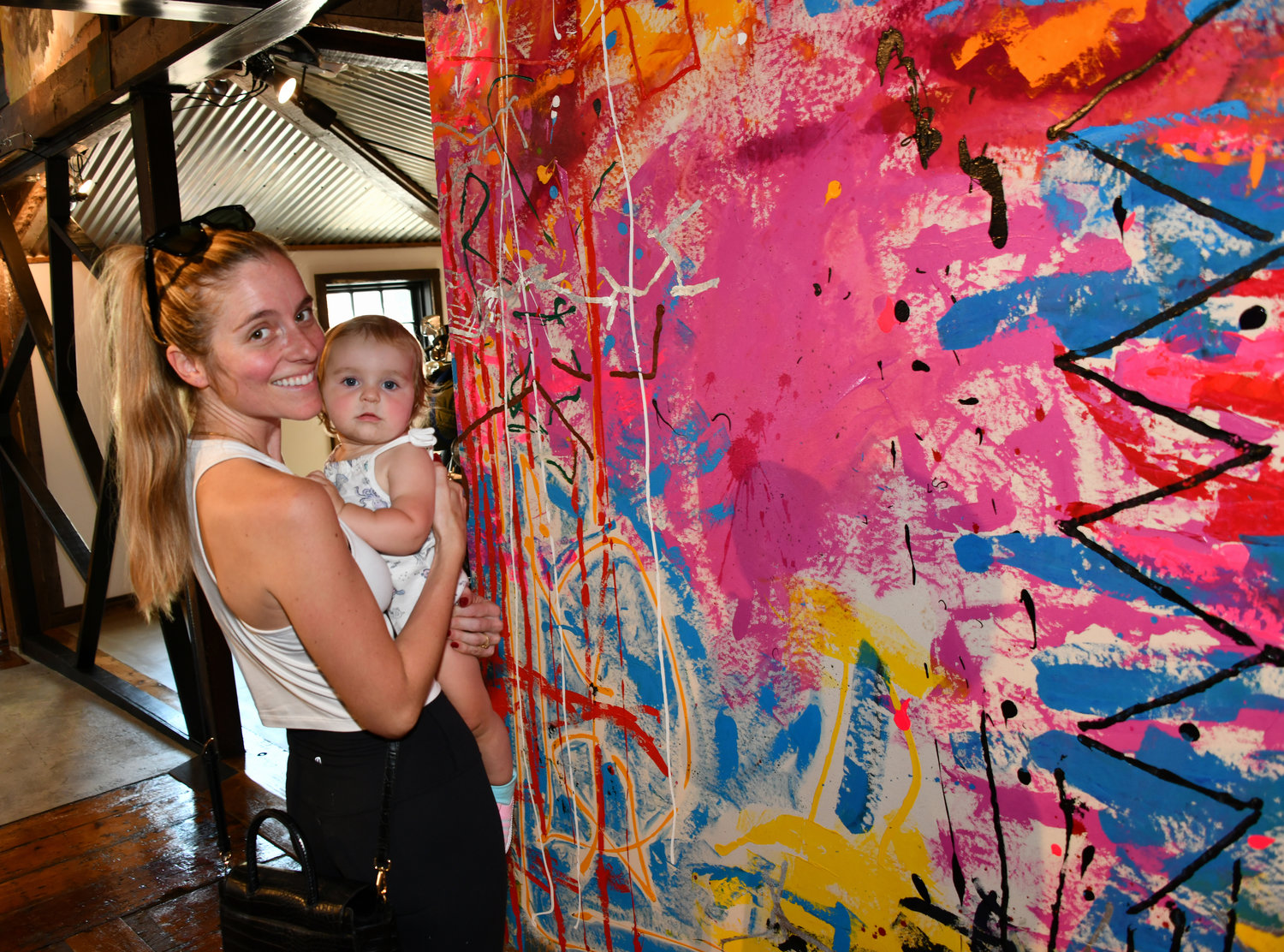 Donna Morgan Greer and her daughter Goldie admired the paintings at the Arts and Automobiles show. The Coles House is preparing future activities for children of all ages
Tab Hauser/HERALD
By Roksana Amid

Preserving history through art was one of the main goals. When the collective first considered the Coles House, a 9,000 square-foot landmark structure dating back to 1810, the building was heading toward demolition.

When built in 1668 by a descendent of Robert Coles — one of the founders of Glen Cove — the building was a two-room farmhouse. Years later, it was expanded to six rooms downstairs and three rooms upstairs. As the years went by, it was used as a newspaper office and as a law office. Then came years of neglect.

After four years of restoration and reconstruction to meet the city’s Building Department requirements, and after Covid-19 restrictions, it’s open to the public.

The collective’s inception began in 2017, when Martino Auto Concept owners and philanthropists Joe LaPadula and Jon Holzer transformed the circa-1810 Coles House in Glen Cove into a kaleidoscopic street-art exhibit. Since that time, LaPadula, Holzer and the collective have spearheaded community events, including last fall’s “Arts and Automobiles” exhibition at RXR Village Square, a pop-up art gallery, and an array of holiday-season events, including one of the nation’s largest annual Toys for Tots drives.

The collective, which secured not-for-profit status in February 2022, is committed to utilizing the arts as an engine for economic growth in Glen Cove by providing new opportunities for artists to showcase their talents.

Hulbert Waldroup, a Southampton based visual artist, is one of many artists who collaborated with the collective before Covid-19 and has continued to do so today to help raise funds for charitable causes. When asked about what influences his art, he said he aims to create conversation pieces. “A painting is going to greet you at the door when you open it,” Waldroup said.

Originally based in Manhattan, he left the area due to the state-mandated coronavirus lockdown, which impacted his business due to the lack of tourism which resulted.  Not long after, the canvas on oil artist relocated to Southampton.

When asked why he partnered with the non-profit organization, he cited his religious background as a major influence. “Being raised Catholic, typically you’re brought up to donate 10 percent of your earnings,” Waldroup said. “If you’re an artist, it should be more than that.”

The collective is seeking to become a catalyst for cultural energy in the city by developing public art and cultural activities, said co-founder Soojin Kim, who is First City Project’s program and special events director and vice-chair. Kim said she often hears the youth of Glen Cove say there aren’t many recreational activities and noted that she hopes to bring positivity and artistic vibrancy to the neighborhood and engage youth through parks, recreation and arts programs.

“All she’s interested in are cars. All she does is look at cars,” said Joey Yanes.  When asked about their experience at Arts and Automobiles they said the art surrounding the show was gorgeous and beautiful. The sisters said they hope to see more events like this in Glen Cove.

One of the goals of the collective, to increase tourism, was met with their exhibit. John Kekllas, an avid car lover and a resident of Manhasset heard about the event via email.

A retired aerospace engineer, he was enthusiastic about the event and said he hopes Glen Cove will incorporate more art-based events, especially ones centered around automobiles.  “I think the town needs this type of stuff. It gives you something to do, somewhere to go, you meet friends,” he explained.