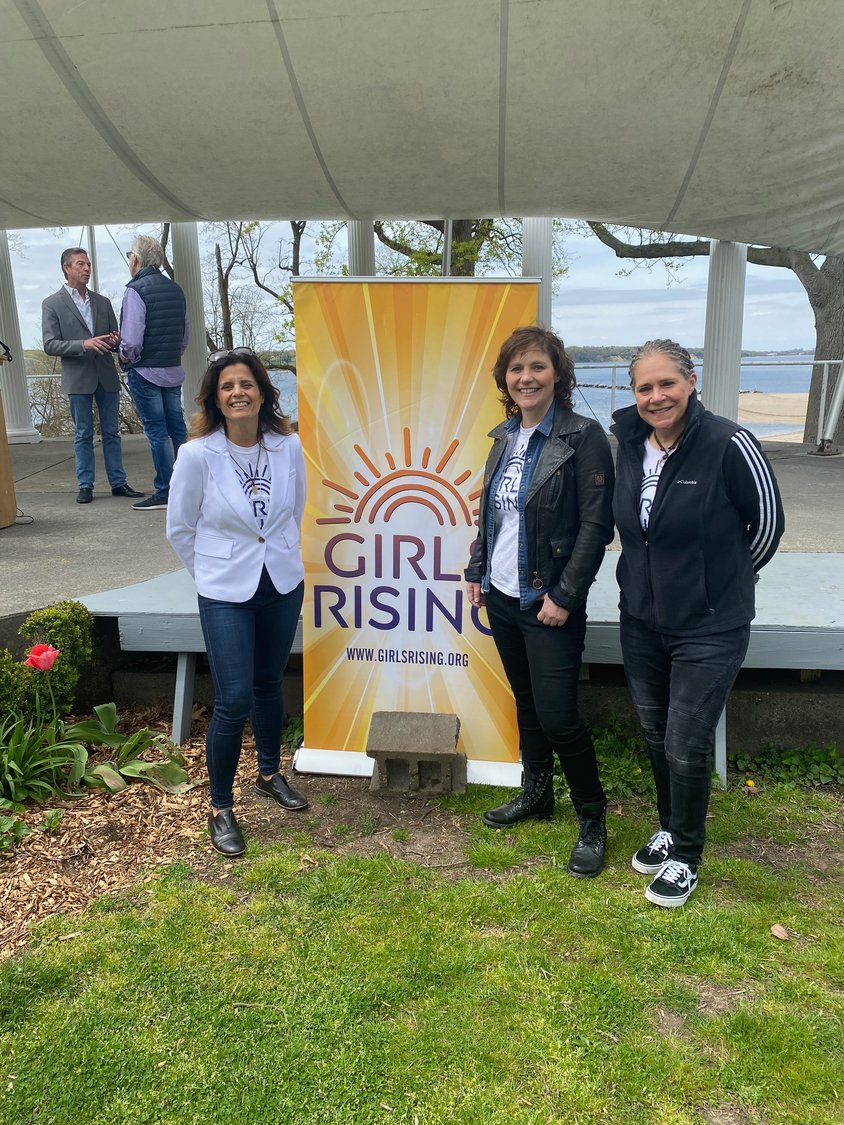 Antigone Rising members Nini Camps, Kristen Ellis-Henderson, and Cathy Henderson will be performing their latest album “True Joy” as well as other fan favorites at the festival.
Letisha Dass/Herald
By Letisha Dass

Hear the roar of female empowerment. After three years, the band Antigone Rising will be bringing back its annual Girls Rising Music Festival to Morgan Park this summer. The news was announced at the park on Tuesday.

“Since we've landed at Morgan Park, we've had our most successful year ever,” Nini Camps, of Antigone Rising said, referring to the 2019 festival. “And we are anticipating that this will again surpass our benchmarks.”

In partnership with the City of Glen Cove, Nassau County Comptroller Elaine Phillips, and Legislator Delia DeRiggi-Whitton, the day is set for June 18 at noon.

Band members and Sea Cliff natives, singer Nini Camps and multi-instrumentalist Kristen Ellis-Henderson, and guitarist Cathy Henderson, of Glen Cove, will be performing songs from their latest album “True Joy” as well as their anthem of female empowerment “Right There With You” at the end of the festival.

As part of the festivities the band will be hosting youth musical performances and a women’s panel with professionals from various backgrounds.

Kicking off the festival, there will be special appearances by Grammy Award winning singers and artists Lisa Loeb, Shawn Colvin, and Judith Hill, who has performed with Michael Jackson, Prince and Josh Groban.

Young performers will be mentored by these star professionals and given a chance to exhibit their talents in front of the festival’s audience.

“It is something that I wish existed when I was little, that's for sure,” Camps said. “Seeing these kids work with our esteemed artists is maybe one of my favorite parts of the whole festival.”

The festival began after the trio in Antigone Rising realized that they were not being booked for as many festivals as their male counterparts.

Even though they had put on their best performances, Ellis-Henderson said, they were not often asked to perform again the next year. “It didn't seem to be changing even with our success in the business,” she said.

To ensure that they would always have a festival to perform, the trio started Girls Rising Music Festival, in conjunction with the efforts of their nonprofit.

The band’s organization, Girls Rising, based in Sea Cliff, was launched in 2014 to encourage young girls to discover their passions and learn how to be themselves. By teaming up with local school districts and youth centers, the band has worked to advocate for young women and their pursuit of careers across the country through workshops and live performances.

Spotlighting educational opportunities in communities, the band will be announcing the winners of their Girl Rising grants and scholarships at the festival. The grants are given to chosen community groups and members in schools and the scholarships are for rising young women or gender non-conforming seniors.

In the past, Ellis-Henderson said, the band gifted a grant to Deasy Elementary School first graders to cover instrument rental costs.

Winners of the first Girls Rising Game Changer Essay Contest, which was open to young girls ages 8 to 10-years-old, will be reading their work as well.

“We're looking forward to getting back doing stuff all over Long Island,” Ellis-Henderson said, “which we have done in the past.”

Putting Teddys House Back Together Again - The Second and Third Floors

Putting Teddy's House Back Together - The First Tour