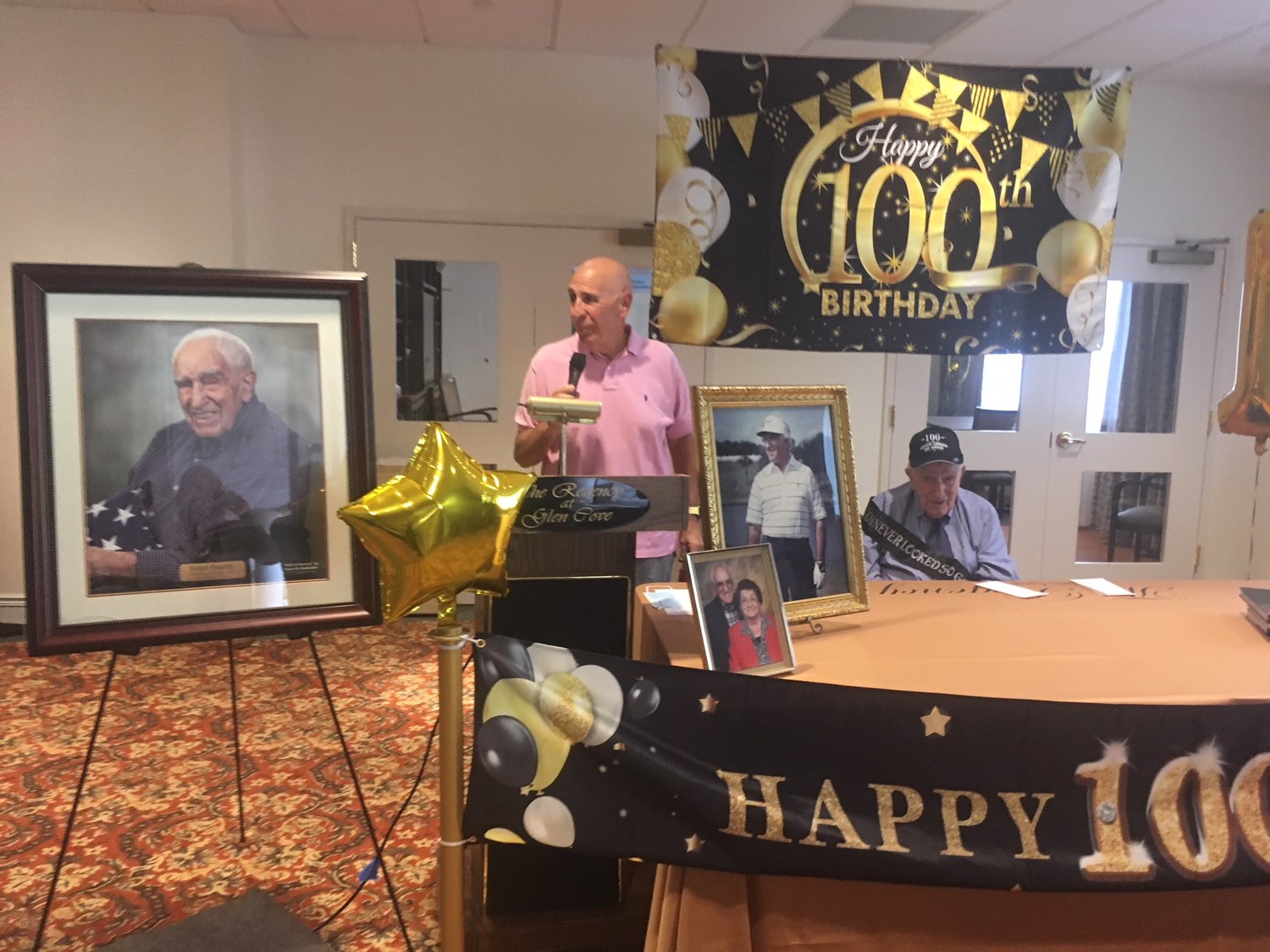 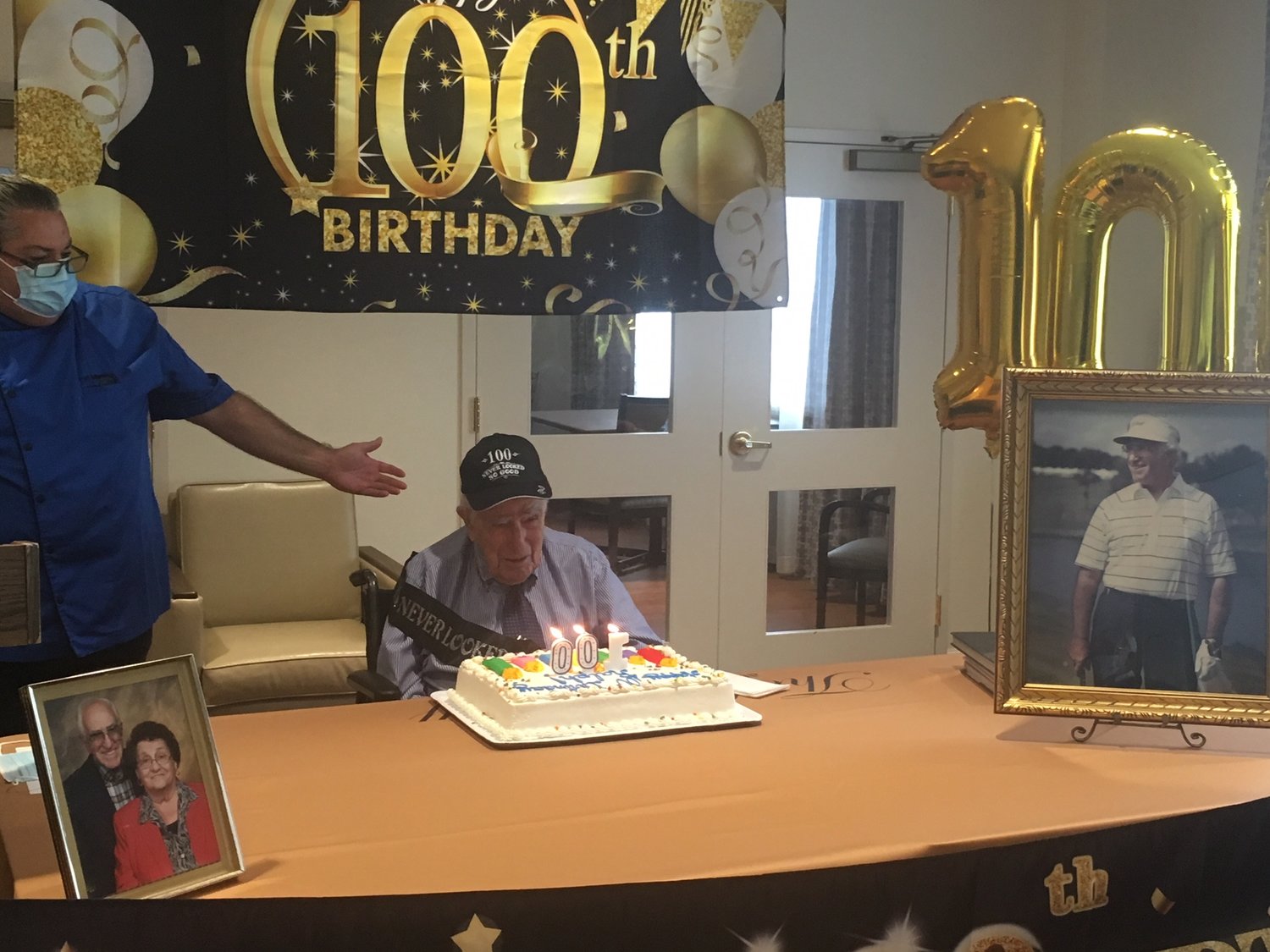 No birthday celebration is complete without cake. Ralph Panetta told attendees, “I love everyone in this room.”
Jill Nossa/Herald
Previous Next

Ralph Panetta has been “hanging around” Glen Cove for the past century. The Glen Cove resident celebrated his 100th birthday last month with family, friends and well-wishers at The Regency, where he has lived for the past eight years. The celebration included gifts, speeches, and tears of happiness.

“So many residents and staff members love his great sense of humor, his contagious smile, and love for the game of golf,” Beth Evans, administrator of The Regency said. “Golf and Ralph go back a long way.”

Panetta has had a long-time connection to Nassau Country Club, where he was part of the professional staff for more than 60 years. He started out by cleaning clubs, and then began caddying in 1934, when he was only 13 years old. When he returned from the U.S. Air Force in 1942, where he was a staff sergeant stationed in the Phillipines during World War II, he began working for Grumman, and worked at the club on the weekends. In 1996, he retired from Grumman and continued to work at the Nassau Country Club full time. He held many jobs at the club, but mainly he ran the club shop and even hand carved golf clubs.

When some of those people from Panetta’s past joined the party -- Nassau Country Club current president Eric Carlston, past president Peter Quick, former president Robert Vanderwag and Robert Miller – Panetta teared up.

“I always talk about you,” Panetta told Carlston. “You’re doing a good job up there.”

Panetta and his wife Sadie, who died in 2018, moved to the Regency from their home in Locust Valley in 2013. They raised three sons: Ralph Jr., Frank and Anthony, who were in attendance at the birthday celebration, and have three daughters-in-law all named Sue. Panett also has five grandchildren and six great-grandchildren.

His brother Joe Panetta, 85, still lives in Glen Cove and was happily celebrating his brother’s milestone.

Mayor Tim Tenke gave him a citation on behalf of the city, and said, “You bring a lot of light to people’s lives.”

Panetta also received citations from the offices of County Executive Laura Curran, Leg. Delia DeRiggi-Whitton, State Sen. Jim Gaughran and Assemblyman Charles Lavine. Congressman Tom Suozzi presented him with an American flag flown over the United States Capitol in his honor, to congratulate him on his 100th birthday.

Photographer Peter Budraitis took a portrait of Panetta and presented it to him last Tuesday, explaining his concept of creating a Wall of Heroes for veterans. His goal, Budraitis said, is to take photos of veterans to present free portrait to their families.

“It’s hard to even talk with all of the emotions I’m going through right now,” Panetta said. “I’m remembering a lot of things of the last 100 years, and they’re all good. I’m especially thankful for the people from Nassau Country Club that still remember me.”

The celebration, Panetta said, was “amazing.”

“Everybody in this room, I love,” he said. “I’ll always remember this day as long as I live.”