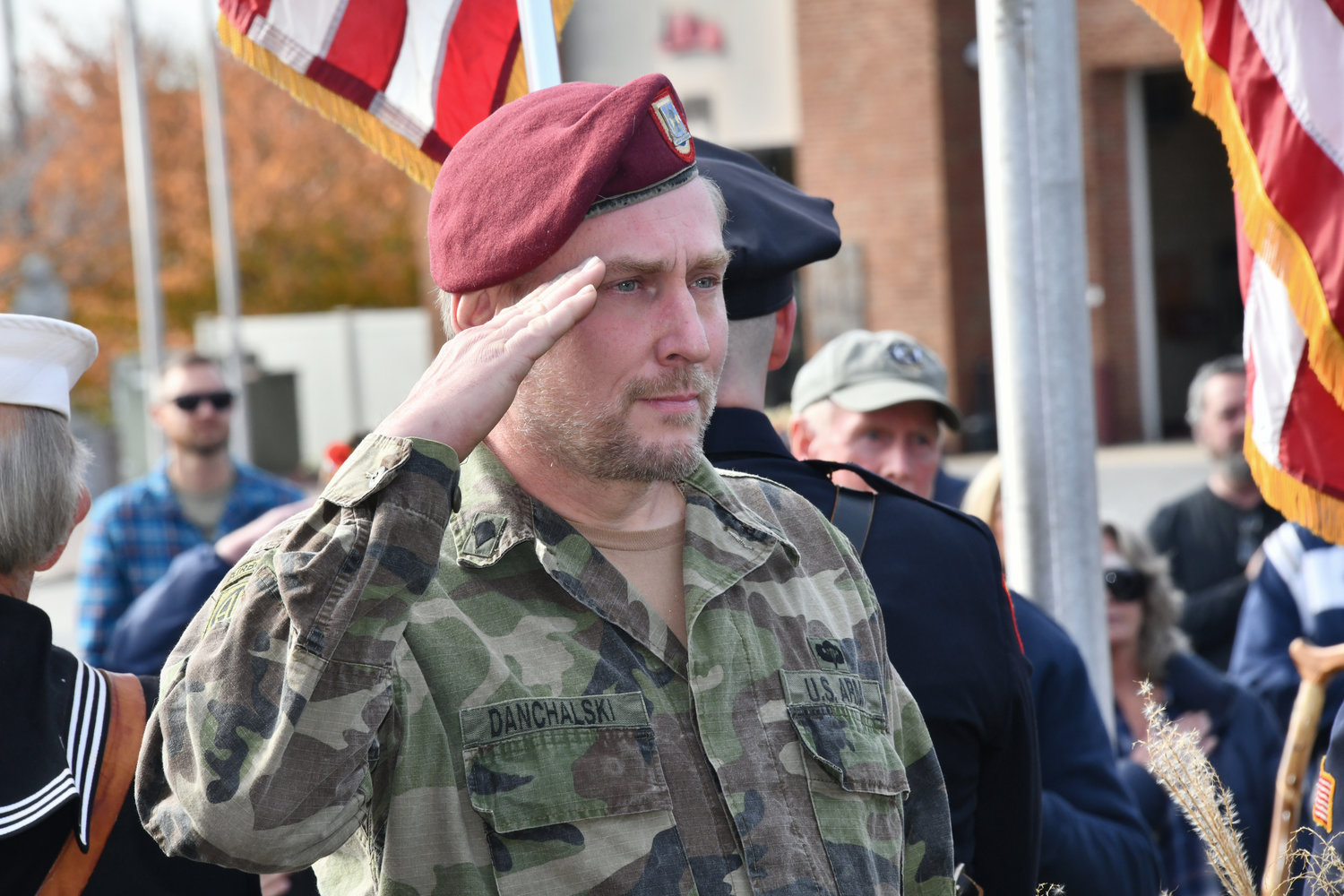 Michael Danchalski, a Glen Cove veteran who served in the Army in Operation Desert Storm, was this year’s Veterans Day honoree.
Tab Hauser/Herald 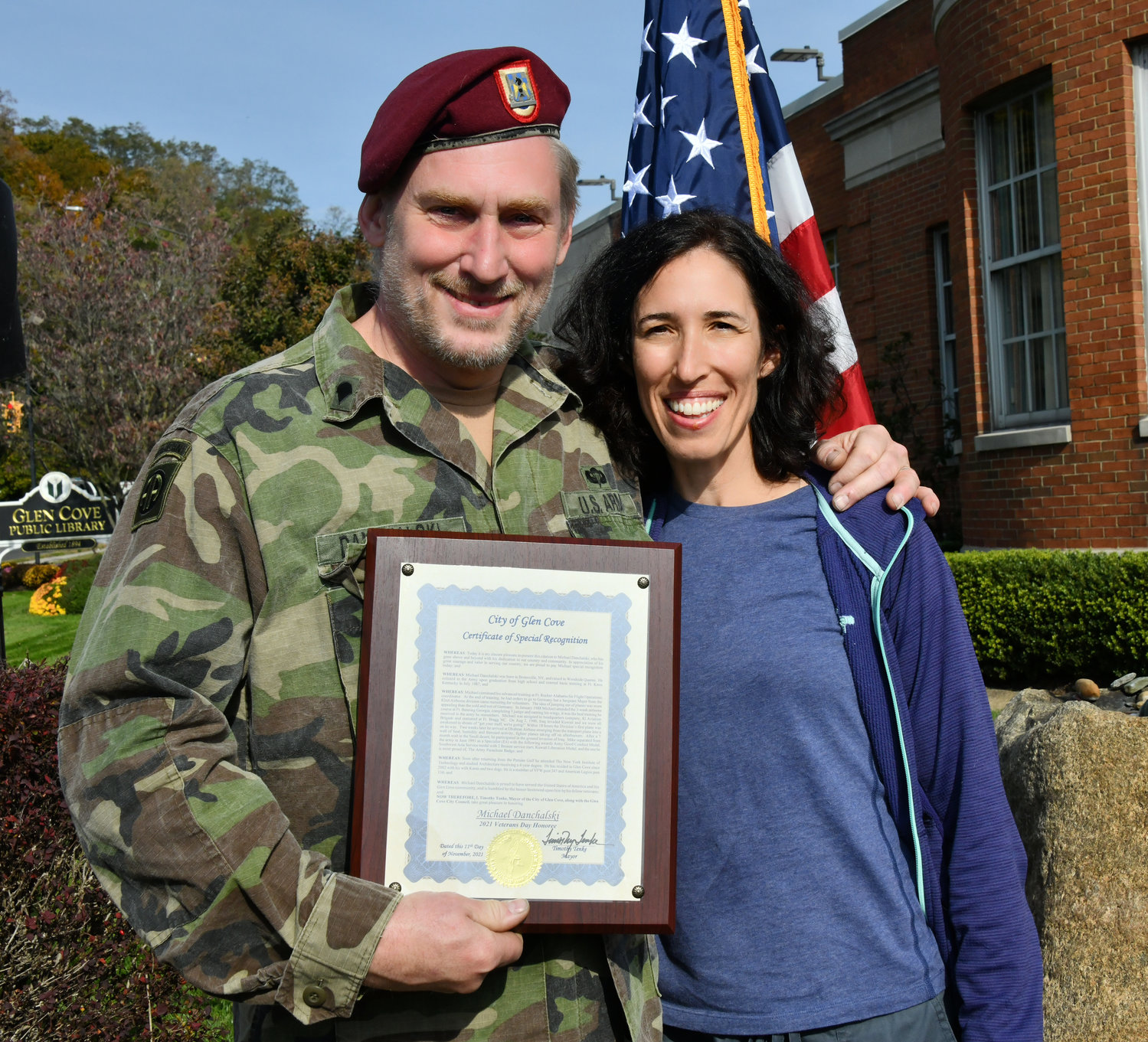 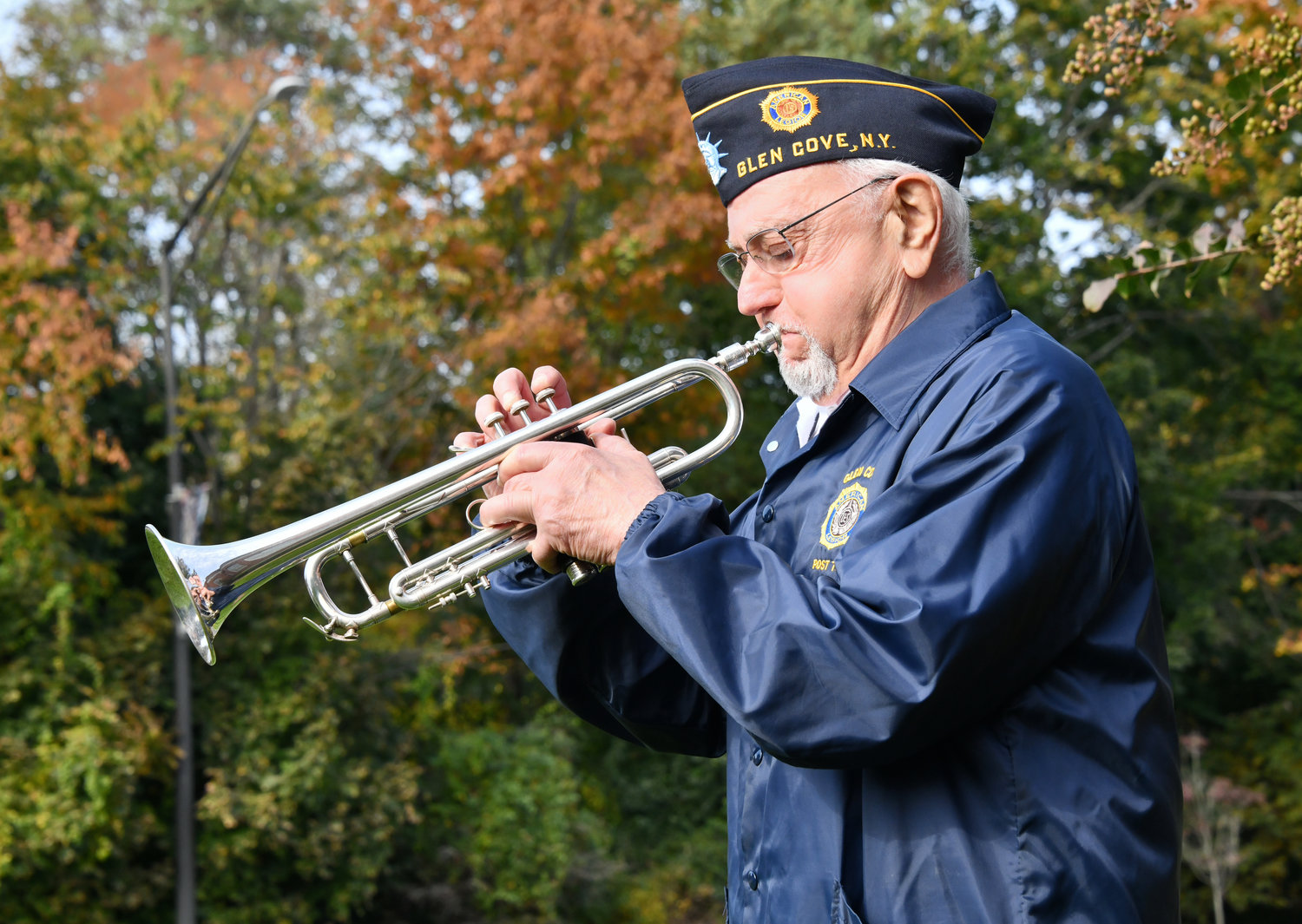 Don Rinira played taps at the close of the ceremony.
Tab Hauser/Herald 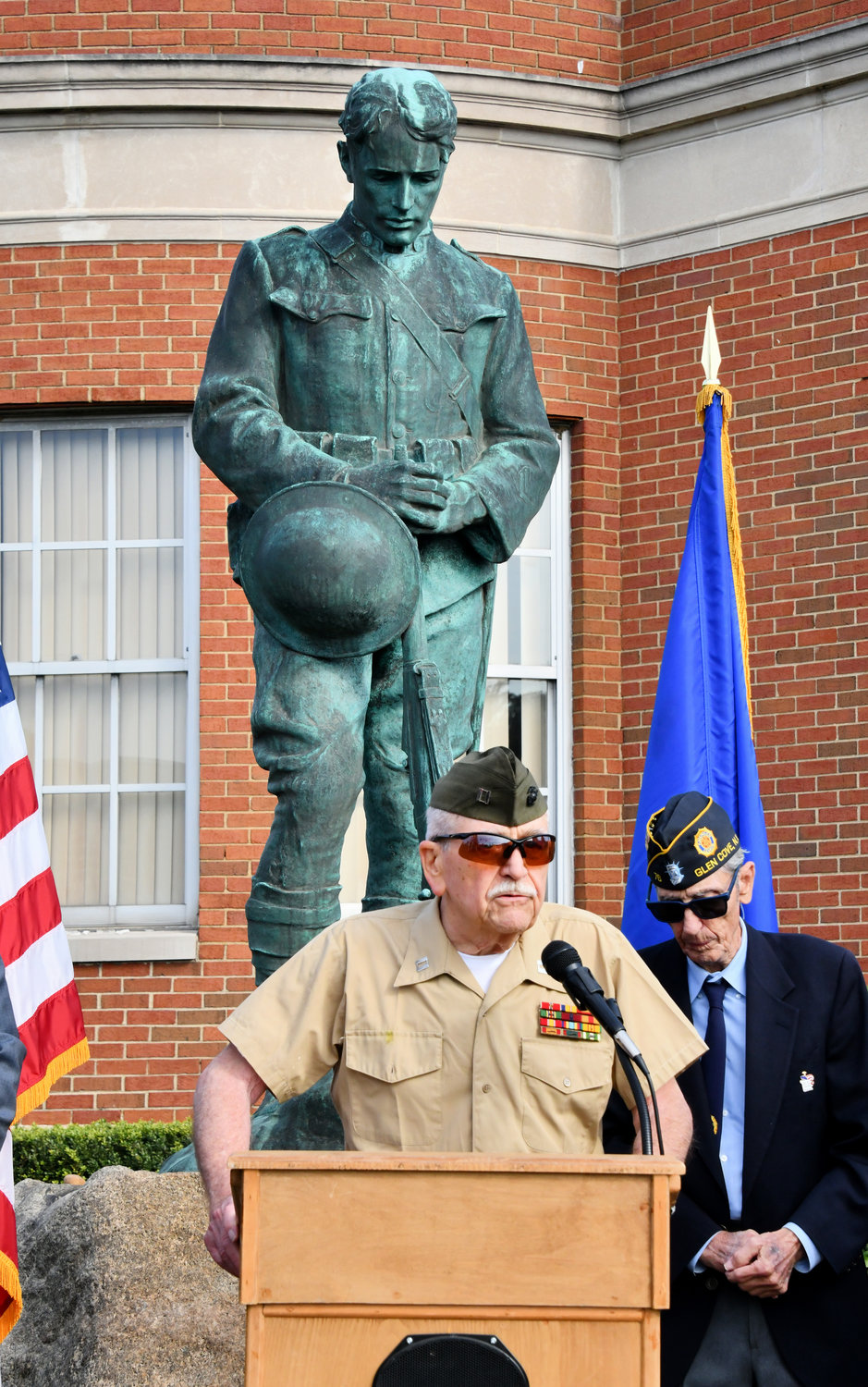 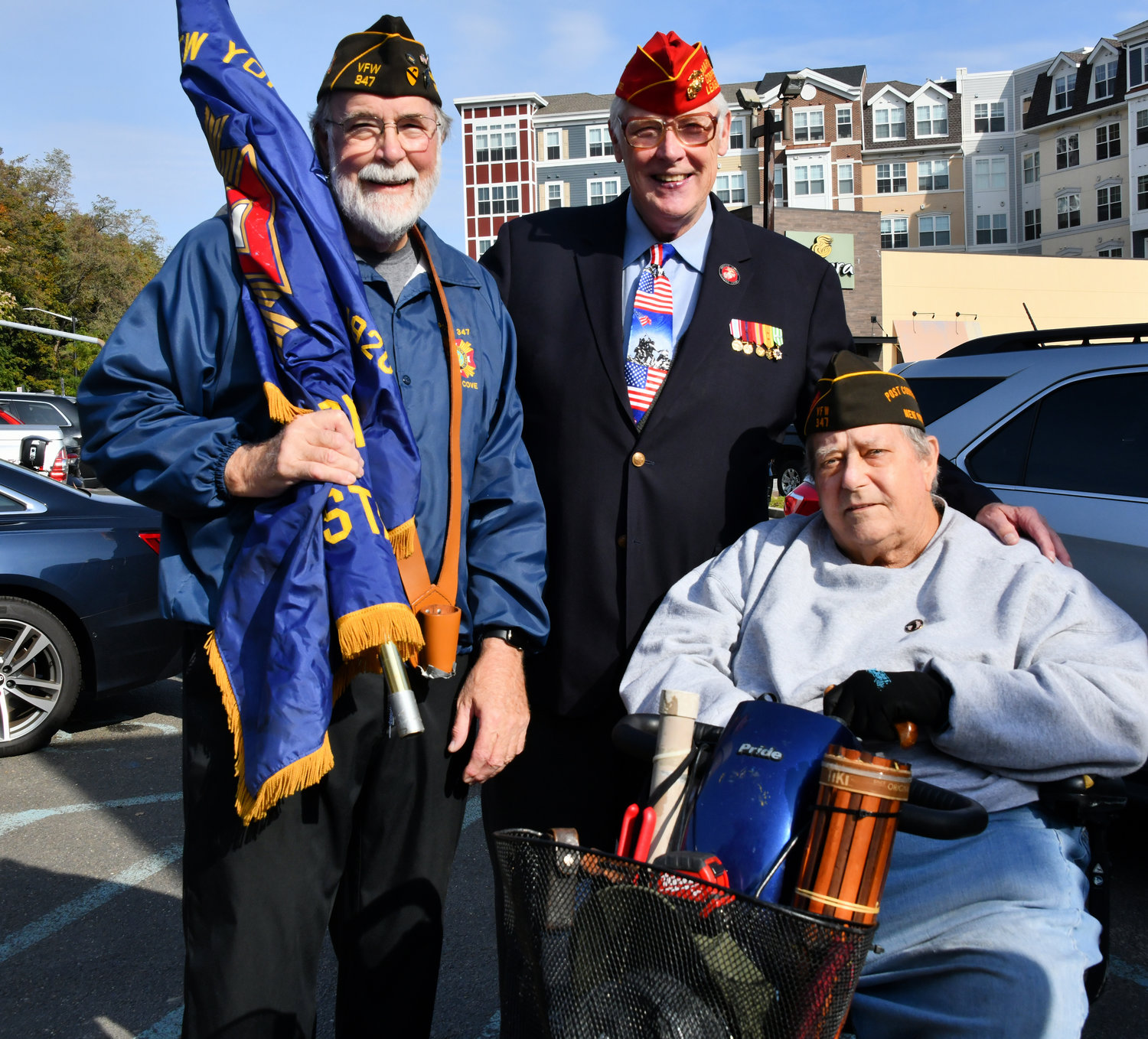 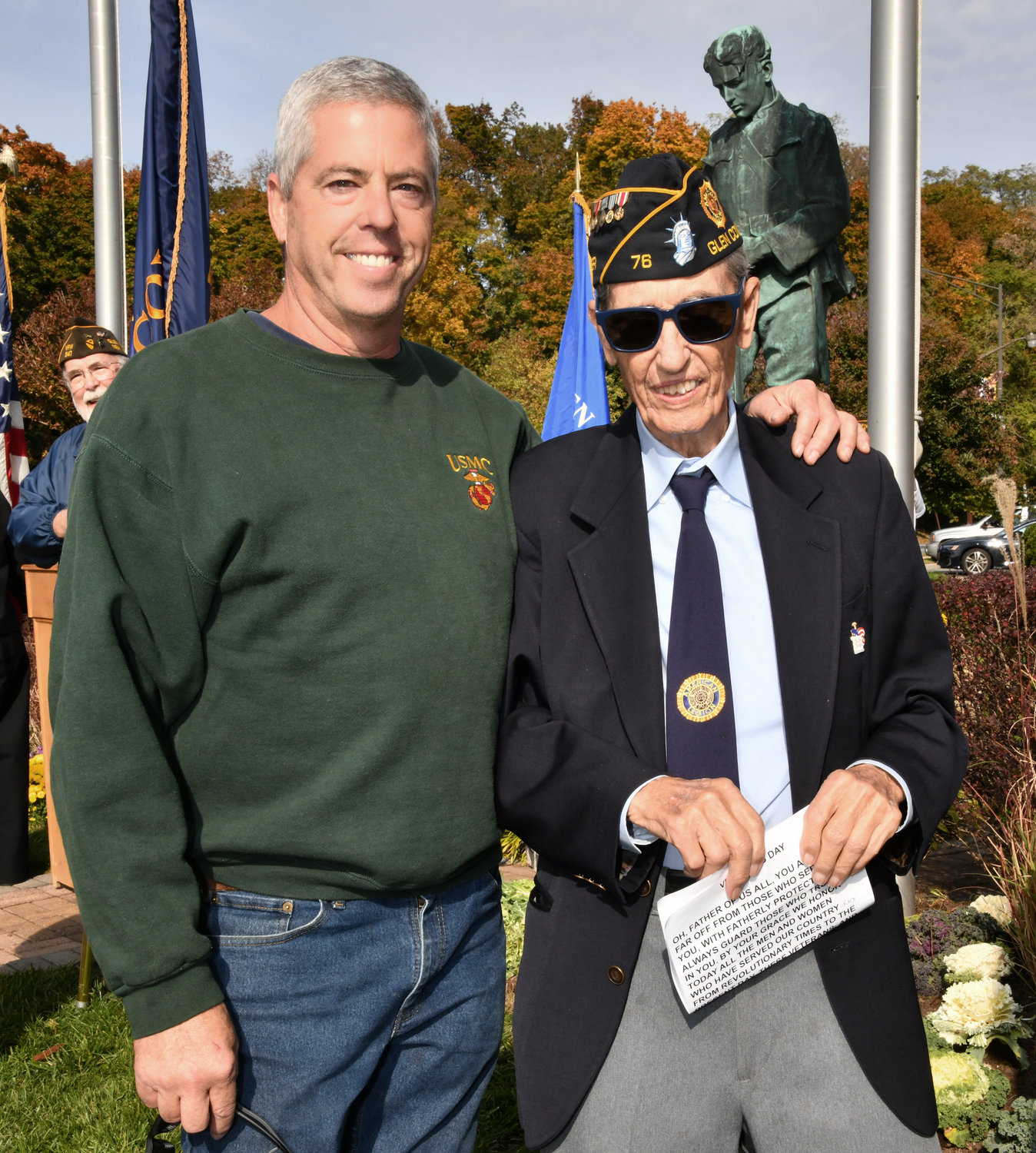 Glen Cove residents gathered near the Doughboy Monument on the front lawn of the Glen Cove Public Library on an unseasonably warm and sunny Veterans Day to honor the men and women who have served in the military.

Veterans of Foreign Wars Post 347 Commander Henryk Nowicki led the morning’s ceremony, and explained the significance of the holiday. “On Veterans Day we honor all of the men and women in uniform who survived,” Nowicki said, “and came home to their communities and their families.”

The VFW has been organizing the holiday ceremony in Glen Cove “for many decades,” Nowicki said, noting that it wasn’t until 1993 that the Veterans Day Committee began choosing an honoree. The tradition started, Nowicki recounted, when he became the post commander and Don DeRiggi was mayor. DeRiggi wanted to honor a veteran who represented all of the veterans in the area, Nowicki said.

Nowicki then introduced this year’s honoree, Michael Danchalski, who has lived in Glen Cove since 2002. Danchalski, who grew up in Queens, enlisted in the Army after high school and entered basic training at Fort Knox, in Kentucky, in July 1987. He trained as a flight operations coordinator at Fort Rucker, Alabama, and joined the 82nd Airborne Division. When Iraq invaded Kuwait in August 1990, Danchalski was sent to Dhahran Airbase, and after a seven-month wait in the Saudi desert, he participated in the ground invasion of Iraq, part of Operation Desert Storm.

Danchalski separated from the Army in June 1991 as a Specialist (E4) with the following awards: the Army Good Conduct Medal, the Southwest Asia Service Medal with two bronze service stars, the Kuwait Liberation Medal and the Army Parachute Badge.

After returning from the Persian Gulf, he attended the New York Institute of Technology and earned a degree in architecture. He is a member of VFW Post 347 and American Legion Post 336.

“It is a privilege to honor you on this Veterans Day,” Mayor Tim Tenke told Danchalski, inviting him to the podium.

Danchalski thanked the attendees for supporting veterans. “I am deeply humbled to be named the Veterans Day honoree,” he said. “I would like to share this honor with all of my brothers and sisters in arms who are here, and those who didn’t make it back.”

He was presented with a certificate of special recognition from Tenke on behalf of the City of Glen Cove.

“Every day should be Veterans Day,” Tenke said. “They never gave up on us, and we can’t give up on them.”

Tenke recalled the fire that ruined the second floor of the VFW Hall on Hill Street in August. “This year in particular, the veterans were reminded of just how appreciated they are,” he said. “The Glen Cove community came together to show support and give donations towards the rehabilitation of their building.”

Normally, the post invites the community for a barbecue at the hall after the ceremony, but that celebration had to be put on hold because of the needed repairs.

“Hopefully we’ll be able to do it next year,” Nowicki said.