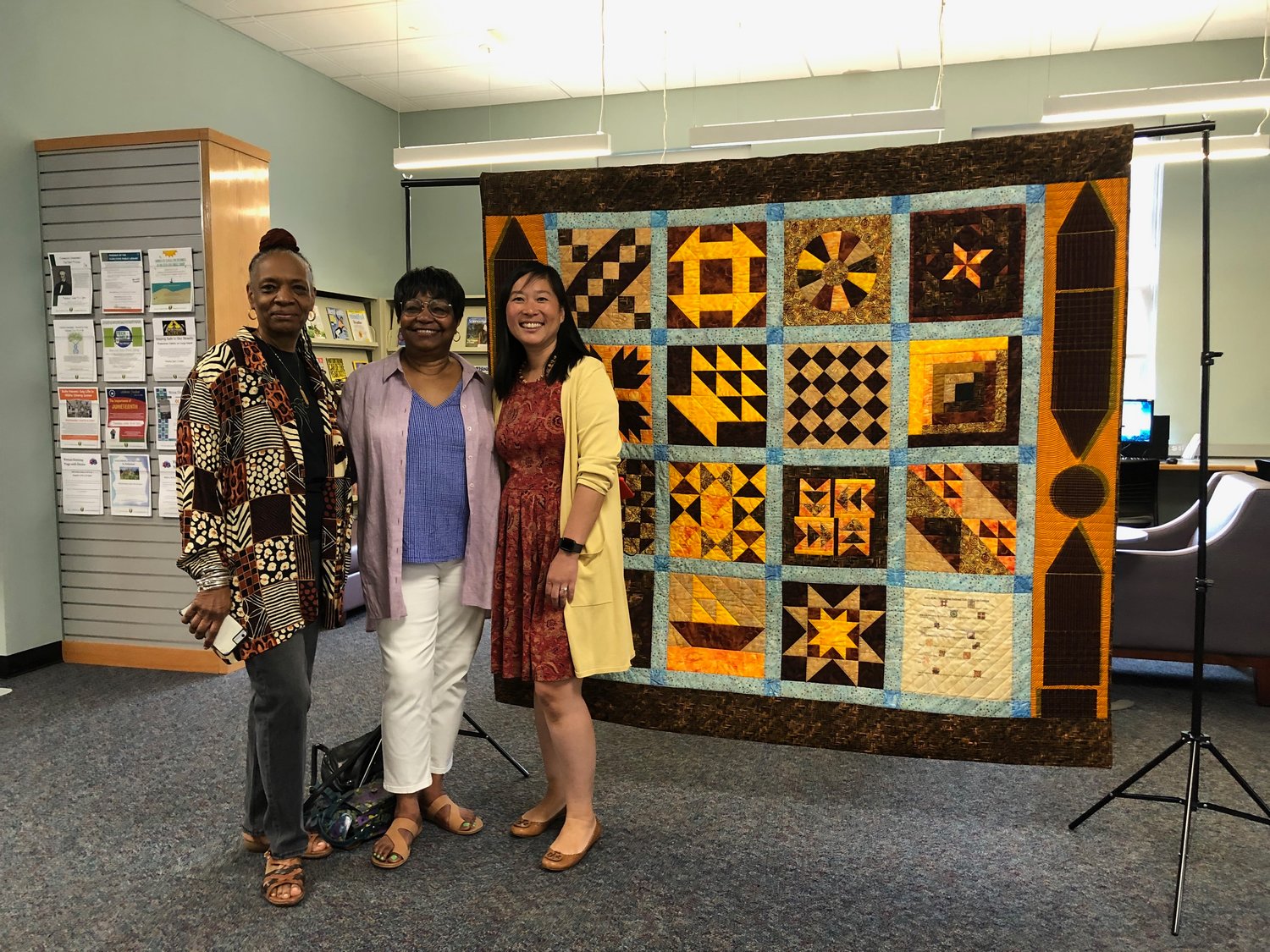 Quilters Marilyn Hamilton, left, and Diane Collier made quilts in honor of Juneteenth, to be displayed at the Glen Cove Public Library with the help of librarian Lydia Wen Rogers.
Courtesy Lydia Wen Rogers
By Letisha Dass

In honor of Juneteenth, which commemorates the emancipation of slaves in the United States, the Glen Cove Public Library, in collaboration with the Quilters of Color Network of New York City, had eight Juneteenth quilts made for display through the end of June.

Librarian Lydia Wen Rogers said that using the quilts was a form of “craftism, where you take a traditional craft, like knitting crochet, and then you partner it up with a political and social message.”

June 19, otherwise known as Juneteenth, was made a federal holiday last year by President Biden. But the historical holiday has been celebrated across the country since 1865, when Union Army Major General Gordon Granger rode into Galveston, Texas, to tell the slaves in that state that they were free.

“It’s been celebrated in the African- American community since 1865,” Rogers said, “and I just feel like if more people know about it, then they can connect with it, and know that it’s a common history.”

Rogers spearheaded the Juneteenth initiative choosing quilts as a method to tell a visual history of African-Americans. “I don’t want just like regular quilts,” Rogers said. “I want a quilt with symbolism and meaning.”

Long Island had the largest slave population in the northern colonies. According to the census from 1781, the final numbers show that 114 slaves lived in the North Shore, which was 14-percent of the population.

“We have so many flourishing Black communities because the Quakers were anti-slavery,” Rogers said.

Quilts were used in the Underground Railroad to give directions and information on safe havens and routes for slaves escaping their owners. Because slaves were not allowed to read and were illiterate, the quilts served as mnemonic devices and were one of the few ways for anti-slavery allies to communicate with slaves.

Marilyn Hamilton, an African-American quilter from Queens, used her quilt to pay homage to the freedom efforts of African Americans who traveled through the Underground Railroad. “The quilts (had) codes that were woven into it to help slaves to get their freedom,” Hamilton said.

Hamilton made a second quilt dedicated to Juneteenth. In the middle of the colorful stitching of fabrics and images, she made the Juneteenth date to remind people of its significance for African-Americans.

“I purposely made sure I put down on June 19, so that people understand, because history is sad. It keeps repeating itself, just with a different collection of people,” Hamilton said. “I always say that when we take some steps forward, that we keep having to take one step back.”

Diane Collier, a quilter from Jamaica, Queens, made her quilt to depict the current turmoil of the country when slaves were emancipated, by having a map of the Union and Confederate states with flames stitching to show the tensions rising. The aftershocks of the fight for the Emancipation Proclamation were depicted with echo quilting to show how after the United States freed their slaves, the world followed.

“I used it to show some sort of movement, like the pulsating [and] the signs of the times,” Collier said. “What happened in the United States, basically affects the rest of the world. In some kind of way, other places in the world decided they were going to get their independence like we got ours.”

The news of Juneteenth was not as triumphant as it may seem. It had taken two years for slaves in Texas to learn that the Emancipation Proclamation had passed, and even then, not every slave was able to claim their freedom. Many slave owners refused the order or held out until the next harvest to decide, according to National Public Radio. It was not until the 13th Amendment in the United States Constitution that slavery was officially abolished.