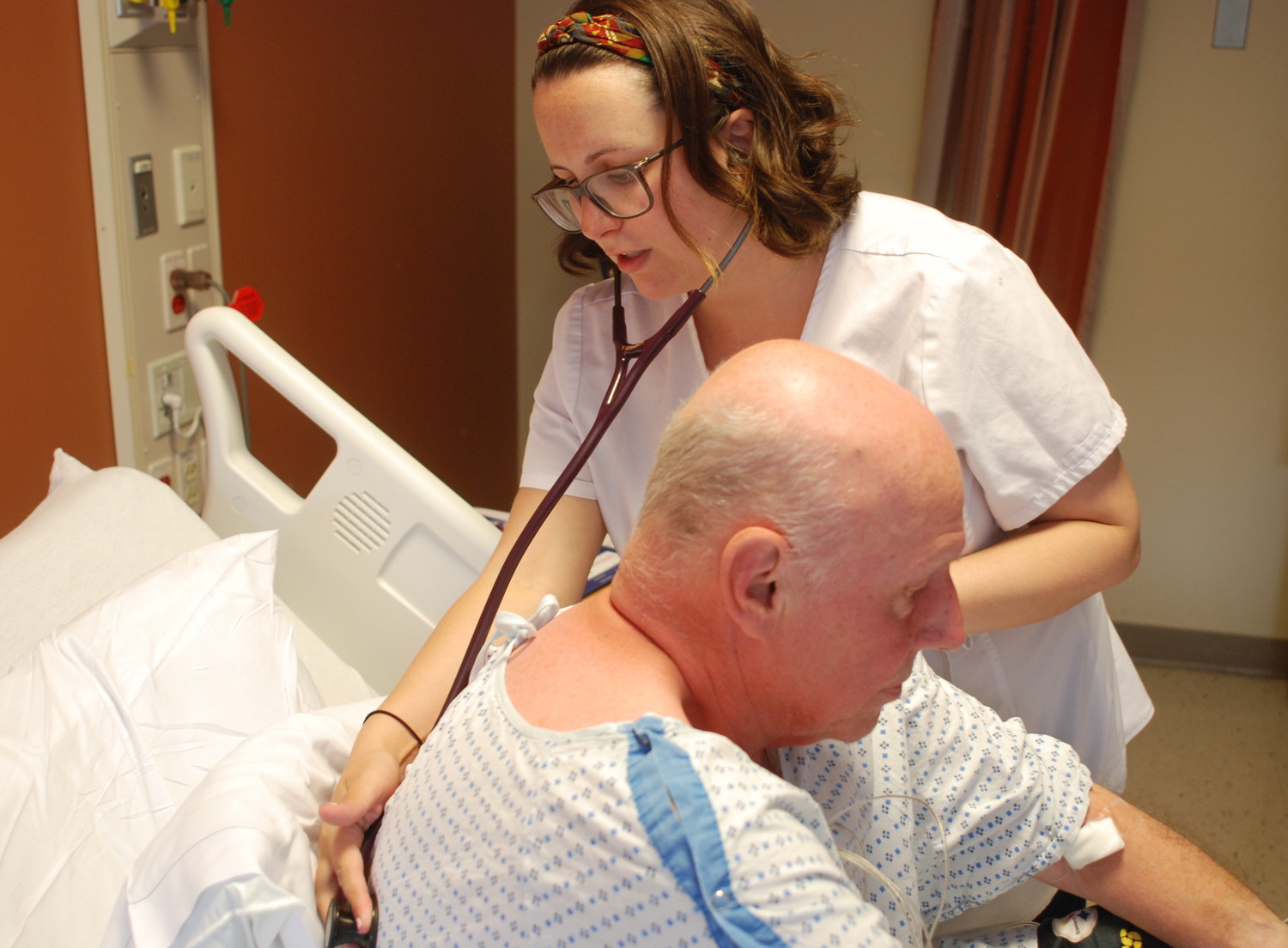 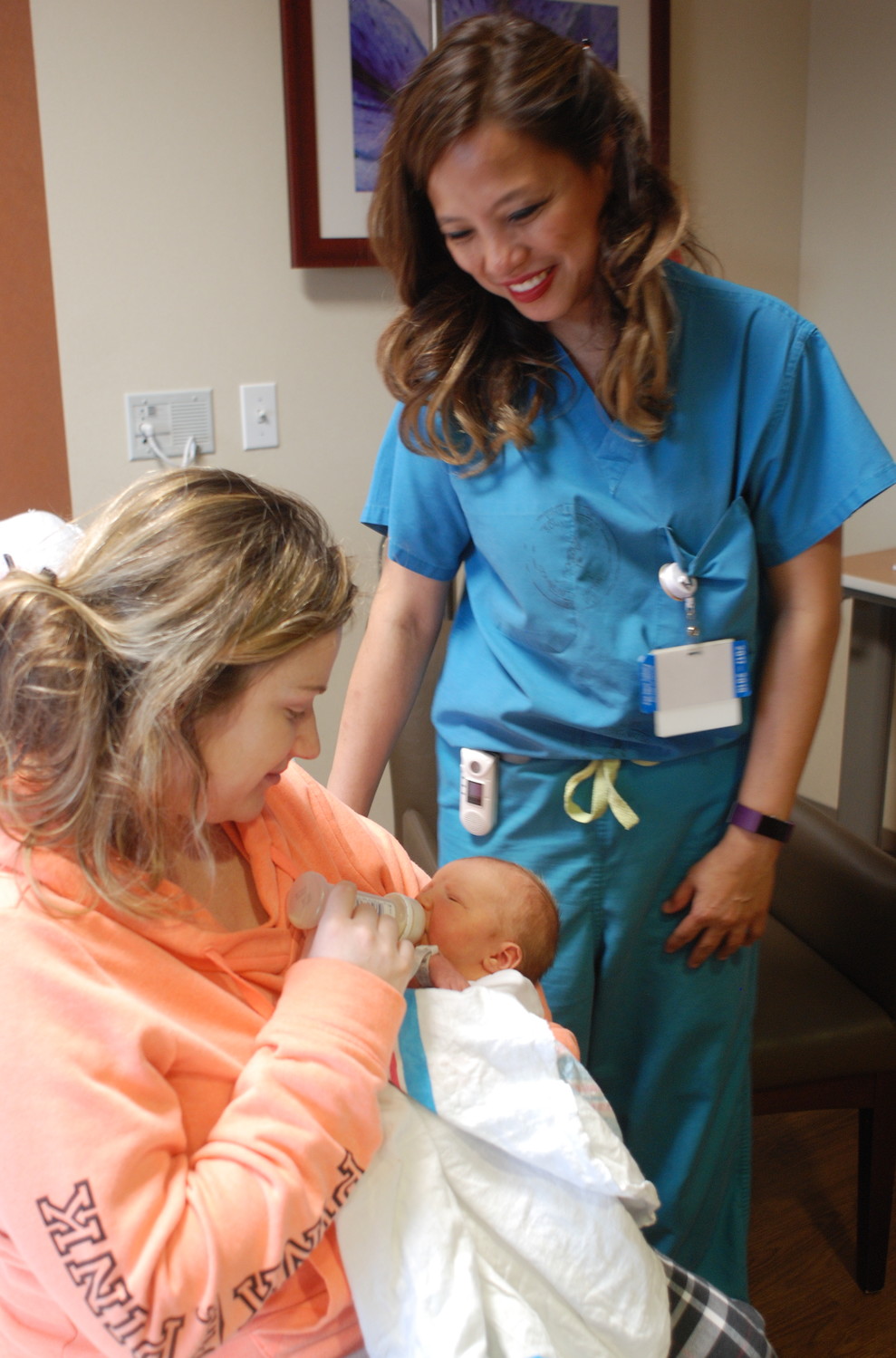 Vanessa DeJesus, a maternity nurse at South Nassau, stopped by to chat with new mother Erin Colgan, of Long Beach, who was holding her 3-day-old daughter, Gianna.
Scott Brinton/Herald 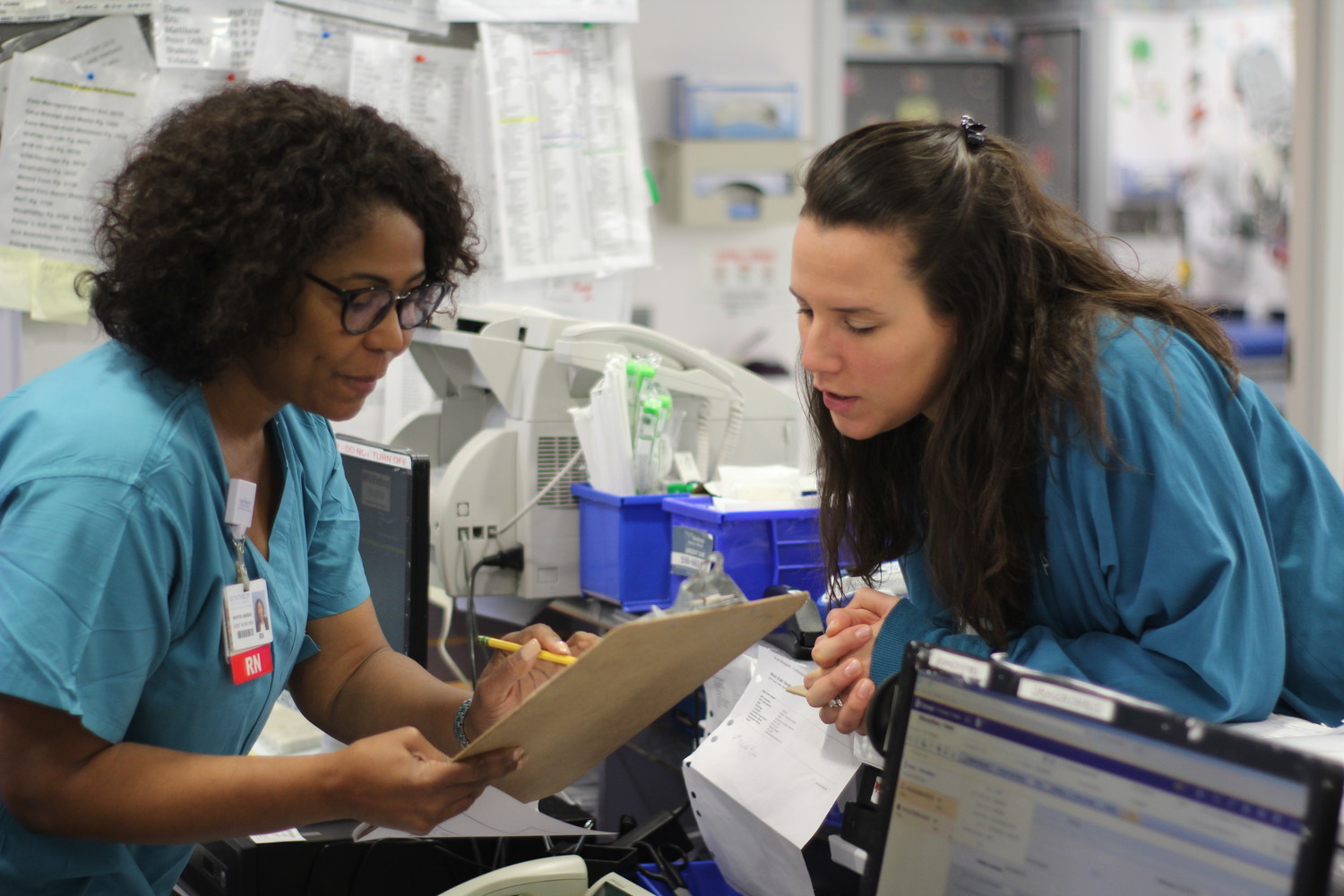 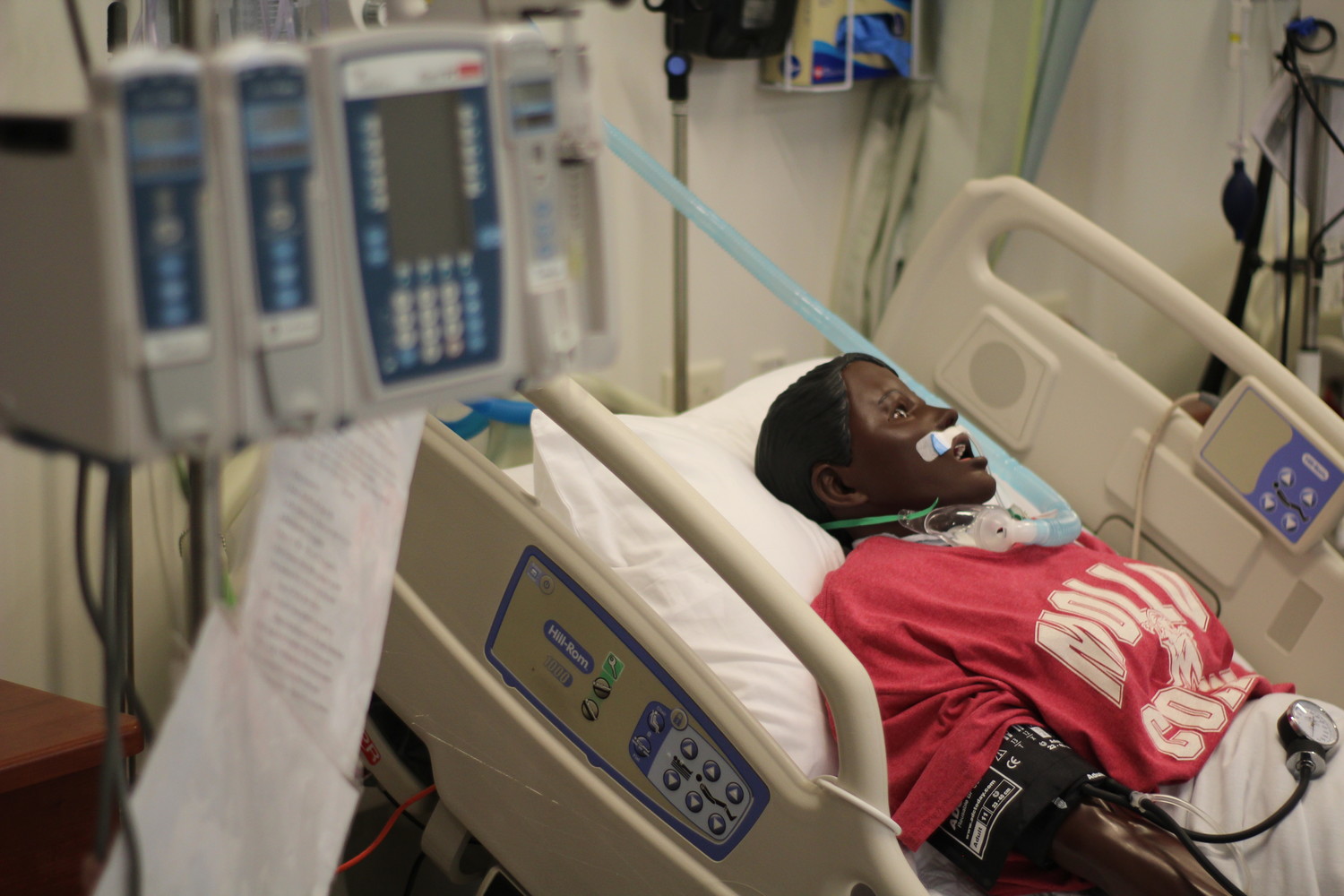 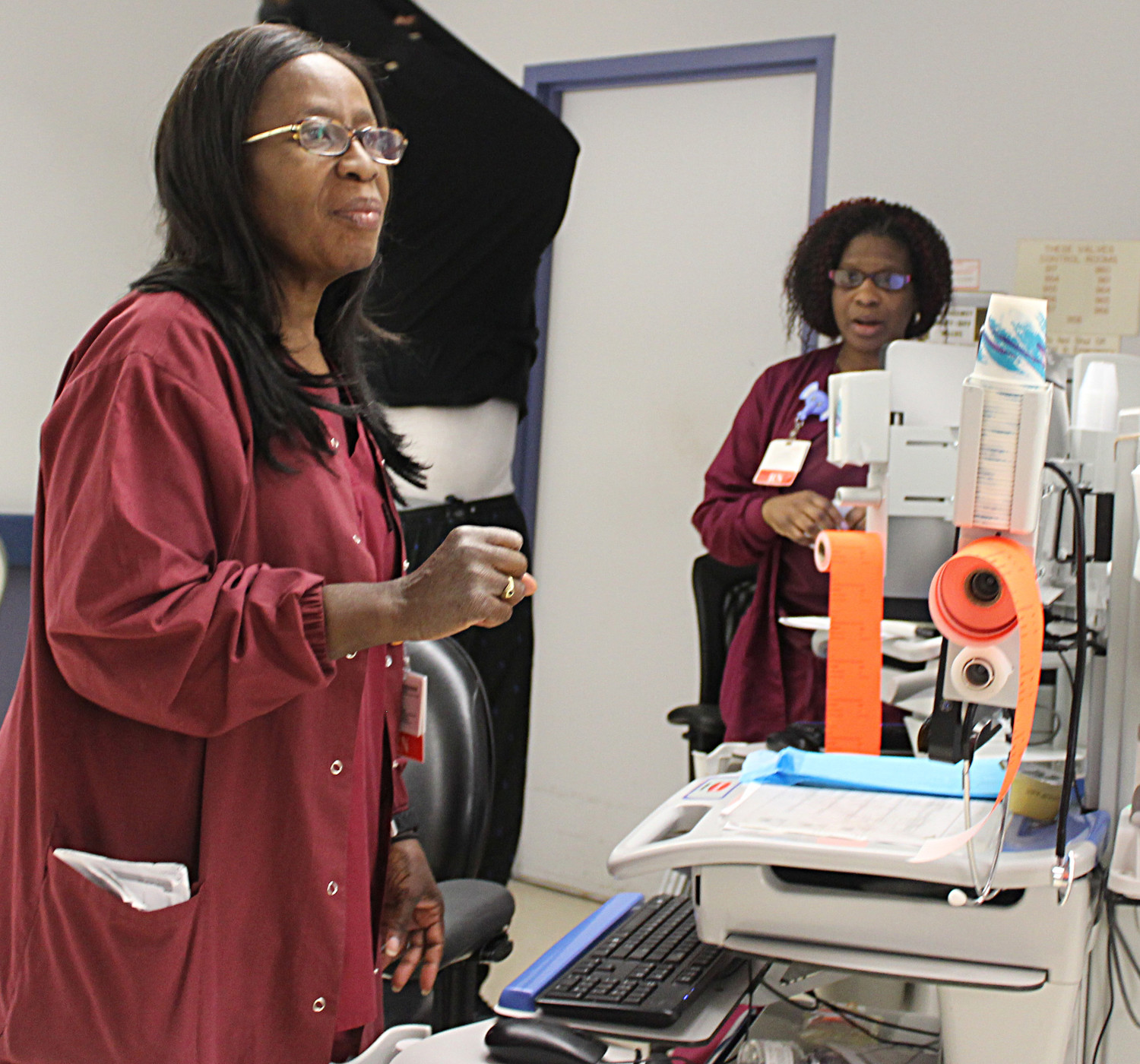 This year, National Nurses Week, sponsored by the American Nurses Association, is taking place May 6 to May 12. This year’s theme is “Nurses: Inspire, Innovate, Influence.” For more, go to nursingworld.org.

In South Nassau Communities Hospital’s geriatrics wing on a recent Friday, the nurses’ station in the center of the ward was a swirl of activity at midday.
Registered nurse Kathryn Geraghty, dressed in white, and Nurse Manager Joan Riggs, dressed in blue, were speaking intently with patients’ families and doctors by phone and inspecting charts. Off to one side, Dr. Sue Penque, South Nassau’s chief nursing officer and senior vice president for patient care, and Damian Becker, a hospital spokesman, stood taking in the scene.
Penque and Becker likened nurses to air-traffic controllers, coordinating a department’s complex flight patterns as surgeons, physicians, residents, nutritionists, pharmacists, lab technicians, attendants, EMTs, police officers, custodians and visitors move about.
They are also the hospital’s first-responders, the women and men who must hurry at a moment’s notice to patients in distress, perhaps on the brink of death.
“Nurses are the core,” remarked Penque, as she dodged orderlies pushing sophisticated diagnostic equipment through the brightly lit corridor. “You can’t run a hospital without nurses. They’re here 24/7.”


South Nassau is able to meet its staffing needs, employing roughly a thousand nurses — 700 of them at the hospital’s main campus in Oceanside and 300 at its other facilities spread across the South Shore.
Keeping up with demand for highly skilled nurses has not been easy for many hospitals, though. Long-term shortages have plagued the profession in the past, according to a 2016 study by the Center for Health Workforce Studies at the State University of New York at Albany. Demand is expected to become increasingly acute in the coming decades.
The first baby boomers turned 65 in 2011, according to the Centers for Disease Control. The baby-boom generation, born between 1946 and 1963, was, until the millennials, the largest generation in U.S. history. As of 2014, there were some 76.4 million boomers, according to the census.
Never before has the U.S. seen such a large generation of people growing older. On top of that, exponential advances in medical technology are expected to keep boomers alive longer than previous generations.
By 2030, some 37 million boomers are expected to be living with chronic illnesses, from arthritis to dementia, the CDC says. Enter nurses. They will be responsible for providing the round-the-clock care that so many boomers will require.
As a result, the American Association of Colleges of Nurses is predicting a nationwide shortage of nurses, with the need for new nurses increasing by 16 percent by 2024. The nursing workforce is expected to jump from 2.4 million nurses currently to 3.2 million that year.

Keeping up with demand
Because New York colleges and universities, including Adelphi, Molloy, Hofstra and Nassau Community locally, have expanded their nursing education programs, the state is now in relative equilibrium, with slightly more nurses graduating than are now needed, according to the SUNY Albany study. New York has roughly 288,000 nurses across the state, the study states.
Colleges and universities are under increasing pressure to maintain or continue expanding their nursing programs, however. If New York’s “current training and retirement patterns remain the same, the supply of nurses is expected to grow and continue to meet projected demand,” the study states. “However, changes in the estimated number of nursing graduates or retirements could lead to nursing supply-and-demand imbalances” — that is, shortages.
Dr. Eileen Mahler, South Nassau’s director of nursing education, noted that a number of New York’s most experienced nurses are themselves baby boomers. At age 60, she is one of them.
“Over the next decade, there will be a number of nurses in that boomer range” who will retire, said Mahler, who has been on staff at South Nassau for four decades and earned her doctorate in nursing last year.
New York, she noted, might not see a gap in the number of nurses that it needs, as is likely to be the case in other states, but there could be an experience gap when thousands of boomer nurses retire.
“When I came out as a new graduate,” Mahler said, “I learned from a nurse with 30 years of experience.” She wonders how many such seasoned nurses will remain when the boomers leave the profession en masse.
Dr. Valerie Terzano, chief nursing officer at NYU Winthrop Hospital in Mineola, shares that concern. Over time, experienced nurses develop a “sixth sense” that allows them to quickly react to patients’ changing conditions, she said.

Technology advantage
Today’s nursing students, though, have access to new learning technologies that previous generations did not.
At Molloy College’s Barbara H. Hagan School of Nursing in Rockville Centre, mannequins simulate the radical physical changes that a patient might experience if a nurse were to miss a subtle sign of illness or make a wrong move. Simulation mannequins were first used in the 1960s, but they were crude by comparison to today’s models. Fifty years ago, the mannequins more resembled those that one might encounter in a CPR class. Today they’re loaded with sensors that allow instructors to simulate real-life scenarios. Certain ones even change color or talk.
Dr. Marcia Gardner, dean of Molloy’s nursing school, compared current mannequins to the highly advanced airline simulators that commercial pilots must practice emergency landings on. The goal, she said, is to improve nursing students’ “critical thinking and clinical decision-making skills.”
Kathy Skarka, senior vice president of patient care services at Nassau University Medical Center in East Meadow, said the technology training that younger nurses receive in college allows them to offer “a new perspective” when they enter the workforce, adding that she believes they will be able to adapt quickly in the modern era.

Specialty challenges
Still, it can be challenging to find nurses for demanding specialties such as perioperative care and emergency room medicine.
Theresa Criscitelli, assistant vice president for perioperative and special procedures at NYU Winthrop, said surgical nurses act as liaisons between patients, doctors and families, and are critical to ensuring that patients’ needs are met, particularly when they are under the knife. In her role as an Adelphi faculty member, Criscitelli said she encourages nursing students to consider specializing in perioperative care.
It is a long road to become a surgical nurse, however. Criscitelli’s students begin their training while in nursing school, in a class in operating room procedures that she teaches at Adelphi in January. After that, those interested in continuing spend 200 hours in an OR, observing and reviewing best practices. Then they must finish their classes and pass the National Licensure Examination to become a registered nurse, and complete a fellowship at NYU Winthrop, which is a rigorous, 10-month program that might lead, Criscitelli said, to a post in the hospital’s surgical suite.
Hofstra University and Northwell Health have partnered on their new School of Graduate Nursing and Physician Assistant Studies, which will graduate its inaugural class this May. The program, said Dean Kathleen Gallo, prepares students for work immediately after graduation. All 28 graduates of the first class have already secured employment with Northwell, she noted.
Communication is key to nursing, said Kerri Scanlon, deputy chief nurse executive at Northwell Health’s North Shore Hospital. She tells her staff, “You don’t know when you’re going to be in that bed. You need to treat that patient as if they were your mother, your sister, your brother, your child.”