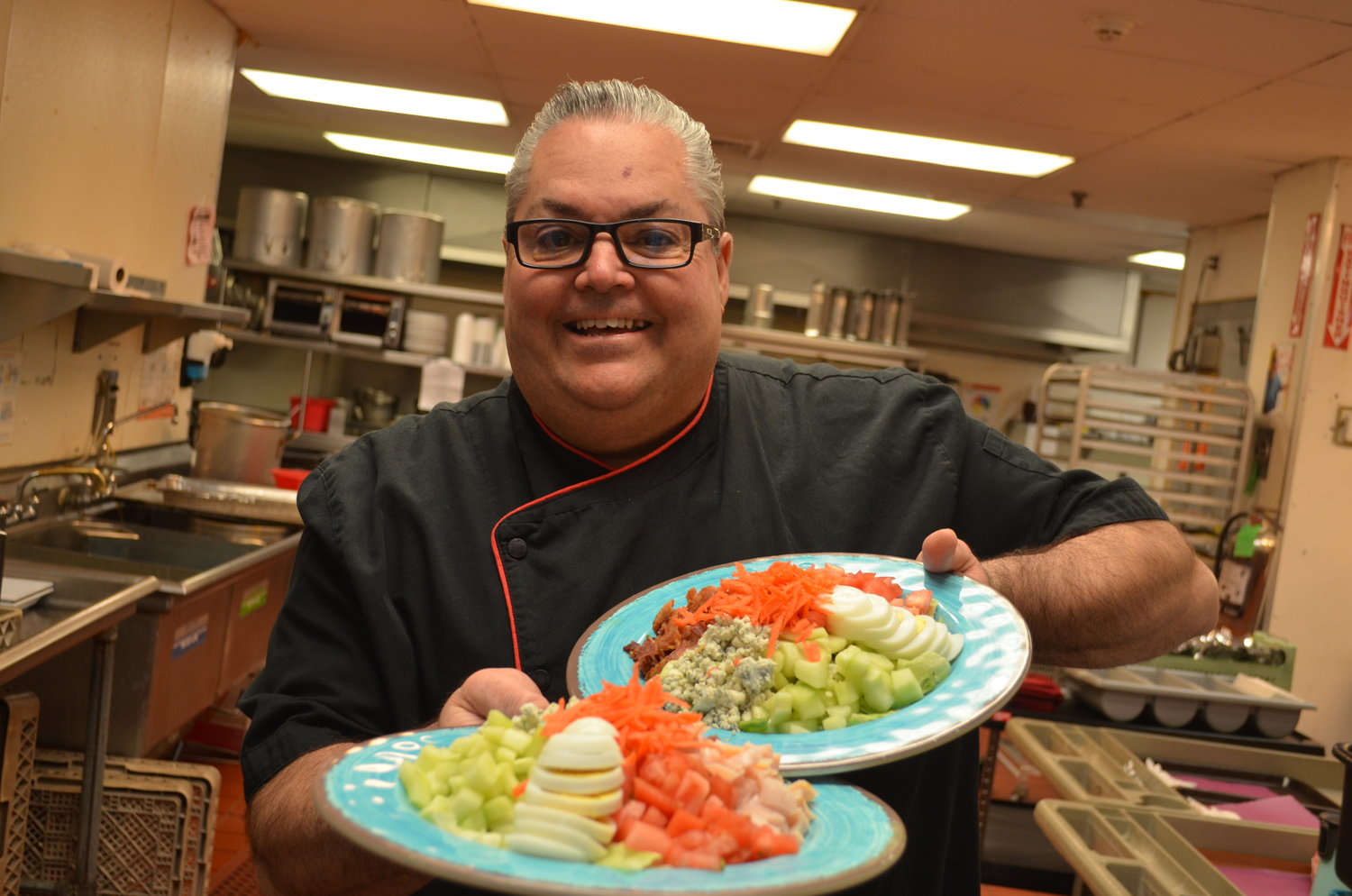 Patrick Marone, Executive chef of the Regency for 18 years, has returned to the assisted living community after a six-month absence.
Courtesy Timothy Baker
By Letisha Dass

A chef, actor, comedian and friend, Patrick Marone wears many hats. After leaving the Regency at Glen Cove for six months to work closer to home in West Babylon, Marone, who’s known as Chef Pat, returned to the job he has held for almost 18 months, as head chef of the assisted-living community.

Marone, 57, has lived a life of adventure. He was chosen by Robert DeNiro to appear as an extra in the 1993 film “A Bronx Tale.” He will be starring in the play “The Honeymooners,” set to premiere at The View Grill in June, as Ralph Kramden.

Marone’s recipes are known across Long Island, thanks to his cooking demos and tutorials. At the Regency, he has a program called Cooking Italian for Seniors. On June 28 he will appear on the Food Network show “Supermarket Stakeout.”

Marone got his start in the food industry when he was 15, as a dishwasher and busboy. He has held every job in a commercial kitchen. “I was watching everything that was going on in the kitchen,” he said, “and learning as I was going.”

His mentor and friend, Joseph Monteleone, of Lindenhurst, the former owner of Silver Pheasant, took Marone under his wing when he was a teenager. “He was willing to learn,” Monteleone said. “He would listen and pay attention, and there was nothing that he wouldn’t do. I’d be telling him to go mop the floor, [and] it wasn’t that it was below him or anything like that. He learned how to learn how to work.”

Monteleone’s son, John, who is now the maintenance director at the Regency, described the relationship between Marone and his father as family. “They’re like brothers,” John said.

Marone rose through the ranks at Silver Pheasant. When Monteleone was unable to manage the restaurant after to an accident, he entrusted the role to Marone as executive chef. Monteleone left Marone to run the restaurant at other times, too. “He was the only one that my father trusted when he went on vacation — that he could leave Pat to take care of the kitchen,” John Monteleone said.

After Joseph sold Silver Pheasant in 1989, Marone stayed for six more years before moving on. In 2003, he started at the Regency.

“He knows what my vision is. I know what his vision is,” Stella Shank, a longtime friend and the executive director of the Regency, said. “And ultimately, it makes it much more successful for our residents and our staff here.”

Marone was missed during his time away from the seniors. Shank recalled how his departure left a gap in the community’s working family. “The place was falling apart when he wasn’t there,” John Monteleone said. “Every time I walk in the kitchen, everybody’s laughing, in a good mood. He’s probably one of the better bosses.”

At a welcome-back event for Marone last month, there were tears of joy at the Regency from staff and residents. “Family sometimes leaves, but always finds their way back,” Shank said.

Marone is skilled at more than just creating culinary masterpieces. He has made the most of his charismatic and playful personality as a comedian as well. At the Regency, he has staged comedy shows for the seniors, which, according to Shank, may soon be coming back. In 2012, several of his videos were featured on “America’s Funniest Home Videos.”

According to Monteleone, however, Marone did not always have a confident stage presence. “He was always a comedian,” Monteleone said. “We always used to tell him, you’ve got to get into that. He would always crack jokes and make fun, but when you put him in front of people, he more or less would freeze.”

Eventually, overcame his shyness, and pursued his second dream, to be a comedian, performing for the first time in 2014. “After getting the first laugh,” he said, “it was like a high.”

He is now a regular performer for the nonprofit Laughter Saves Lives Foundation, which helps first responders overcome financial hardships. He has done stand-up routines at the Gotham Comedy Club, the Friars Club and the View Grill.

“He’s literally one of the funniest guys I’ve ever met in my life,” John Monteleone said.

“He’s good at whatever he does.”