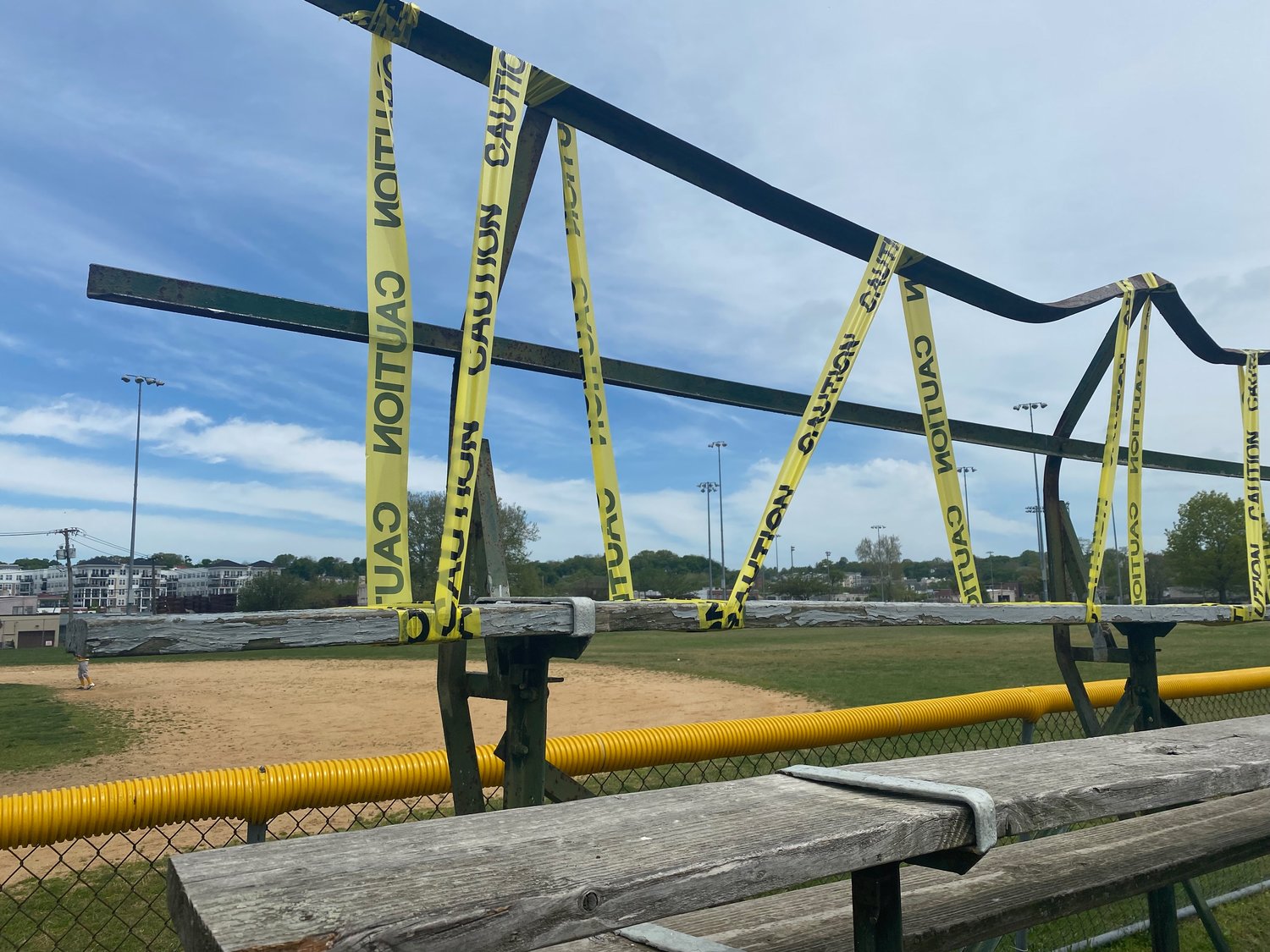 A bleacher at Field 7 in John Maccarone Memorial City Stadium is covered in yellow tape due to damages. New bleachers will be ordered by the city.
Letisha Dass/Herald 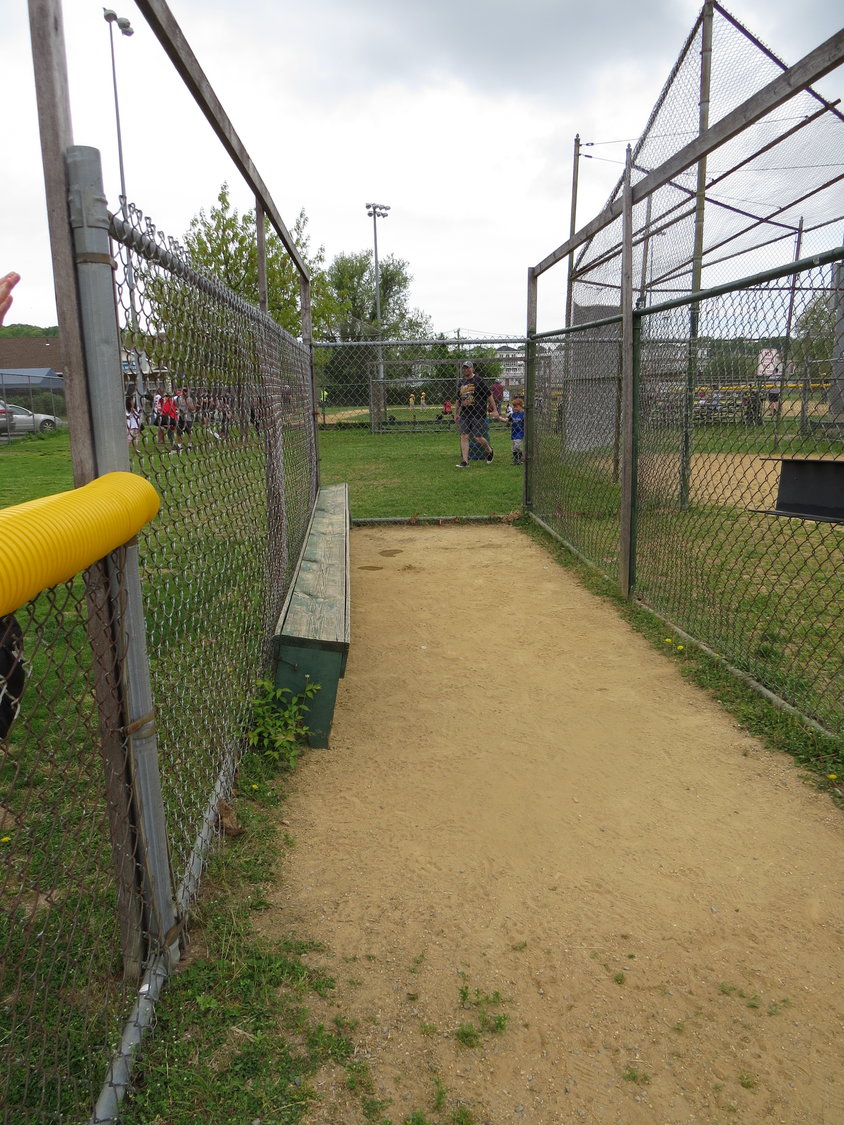 The city is in the process of ordering new benches and covers for dugouts at John Maccarone Memorial City Stadium.
Letisha Dass/Herald
Previous Next

If we’re not doing this stuff for the kids, what are we doing?”
Danielle Fugazy Scagliola Councilwoman
By Letisha Dass

Parents continue to be concerned about conditions at John Maccarone Memorial City Stadium. Issues including a lack of dugout covers for baseball and softball fields, worn out bleachers, fences that need repaired, and old dugout benches are on a list parents say they have sent to the city, including Mayor Pam Panzenbeck.

A mother of two, Megan Sujeski, of Glen Cove, said that while Glen Cove Baseball and Softball Association have done their best, it’s the city that must take care of the property and establishment. “The issue remains with the city and their budget,” Sujeski said in a statement.

Parents have come together to show their support for the change. Michael Cervini, a father whose son plays in the Glen Cove Baseball and Softball Little League, has been advocating for the city to put more money in the fields to help the workers and the community.

“They have to commit some of that money to improving the facilities,” Cervini said.

Panzenbeck and the city have banded together to repair the home of the city’s baseball, football, soccer, softball, and lacrosse teams. Plans are to allocate an estimated $125,000 in funds from capital borrowing and the coronavirus stimulus, American Rescue Plan Act, to help.

“We got extra men coming in [and] extra seasonals coming in to try and get [the] fields in better condition,” Panzenbeck said.

A mother of two, Megan Sujeski, said that the fences at Field one is bent out of shape from children climbing it. The wooden bleachers are not American With Disabilities Act complaint, lacking guardrails and are out of date, and the aged wooden dugout benches are causing children to get splinters.

“We have a lovely city,” Sujeski said. “I pay so much money in taxes. So, like, this should be, first and foremost in their minds to do this for our kids to have good, solid places for our kids to play.”

Cervini added that having the dugouts left uncovered could be unsafe for the children on hot summer days without shade.

“It’s about your kids,” Cervini said. “That’s where you should be putting the money for the future.”

Throughout the years, Cervini said, he has put in at least $10,000 to help install three dugout covers at the fields, buy ladders to help the workers, and raise donations for the batting cages. “We just got to keep the momentum,” Cervini said.

Councilwoman Danielle Fugazy Scagliola, a mother of four,  said she is at the fields every day and has been working to have the issues addressed.

“We need to update as a city,” Fugazy Scagliola said. “We need to take better care of our assets and that stadium is an asset. It’s an asset to our kids. A lot of communities don’t have field space like we do, but we have to take care of it.”

Plans to address the safety concerns for the children are underway. Spiro Tsirkas, director of the city’s youth services and recreation, said he has received quotes on new fences, 20 three-foot bleachers, two large bleachers, 20 aluminum dugout benches, dugout covers, and is working on finding contractors for the turfs at the fields.

“We understand there’s a lot of things that need to be done,” Tsirkas said. “And right now, our focus is the bleachers.”

Even so, the results will take time, Tsirkas added, because the work will be done throughout the year and won’t be complete in time for this year’s season.

So far, new basketball hoops, batting cages, scoreboards, and fixing the retaining wall by Campy Field are projects that the city is currently working on with the help of Fugazy Scagliola. The field at Pascucci Soccer Fields has been remodeled as well. “Change is happening,” Fugazy Scagliola said.

The Glen Cove Baseball and Softball Association held their first annual Glen Cove Youth Sports Dinner to help raise donations for the field and youth sports. Tsirkas said the fundraiser is a good start to achieve the city’s the goals to repair the fields.

“It’s the first time a fundraiser like this was done and with the sole purpose of raising money for the fields, and to try and offset some of the costs,” Tsirkas said.

The workers at the fields have been working double time to maintain the parks and fields. However, Comitino, said that he does not have the manpower, but his team is doing their best. Right now, he has at least nine workers in total under fulltime or seasonal employment.

Once the parks and beaches get more workers, Comitino added, then everything will be done.

Each worker manages more than City Stadium. A part of their job is to maintain all Glen Cove beaches and parks such as Prybil Beach, Pascucci Soccer Field, and Morgan Park. “We’re always here,” Comitino said.  “Our ears are always open to anything. If anybody has any suggestions, come to us. We’ll we have no problem listening.”