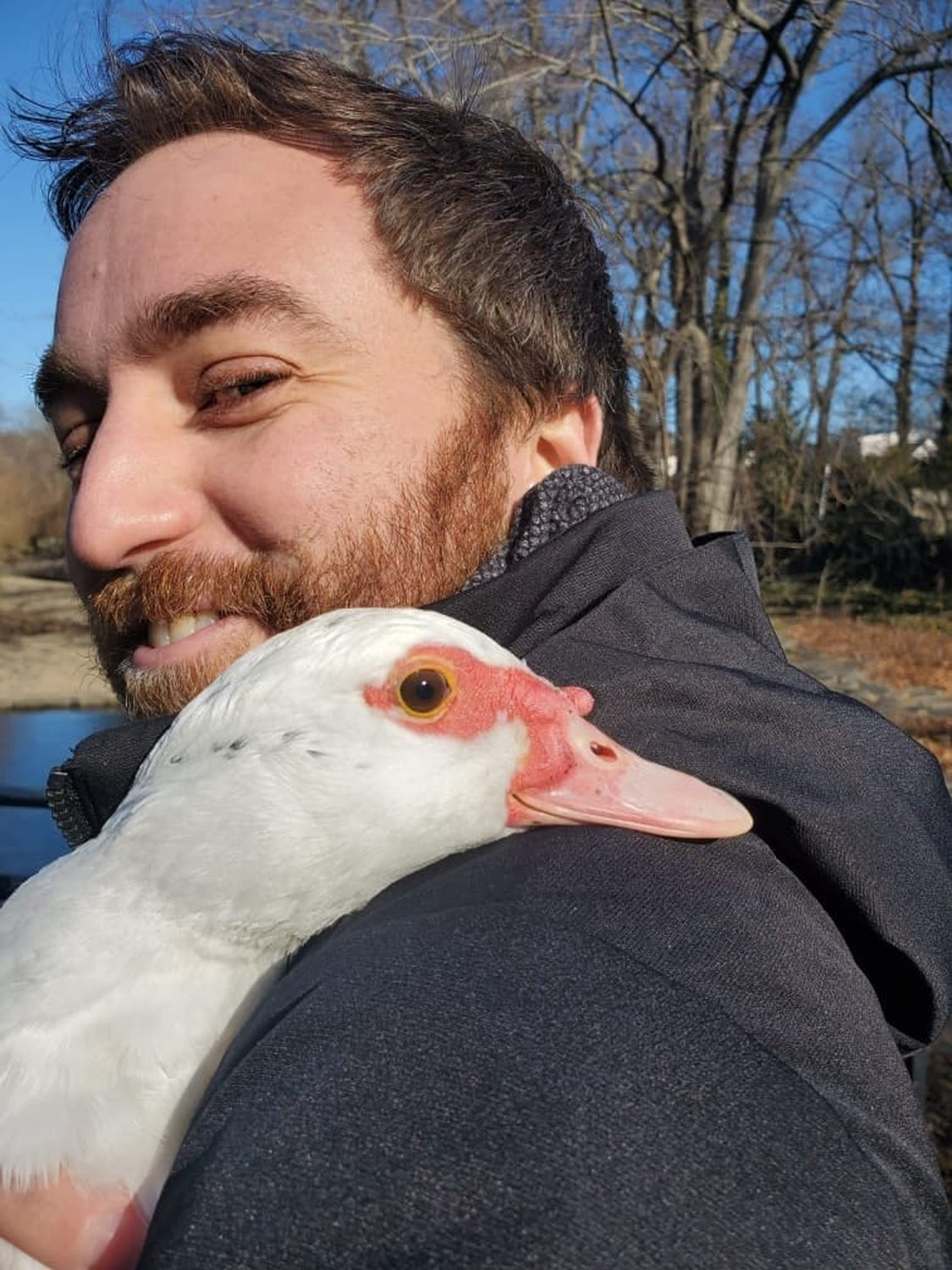 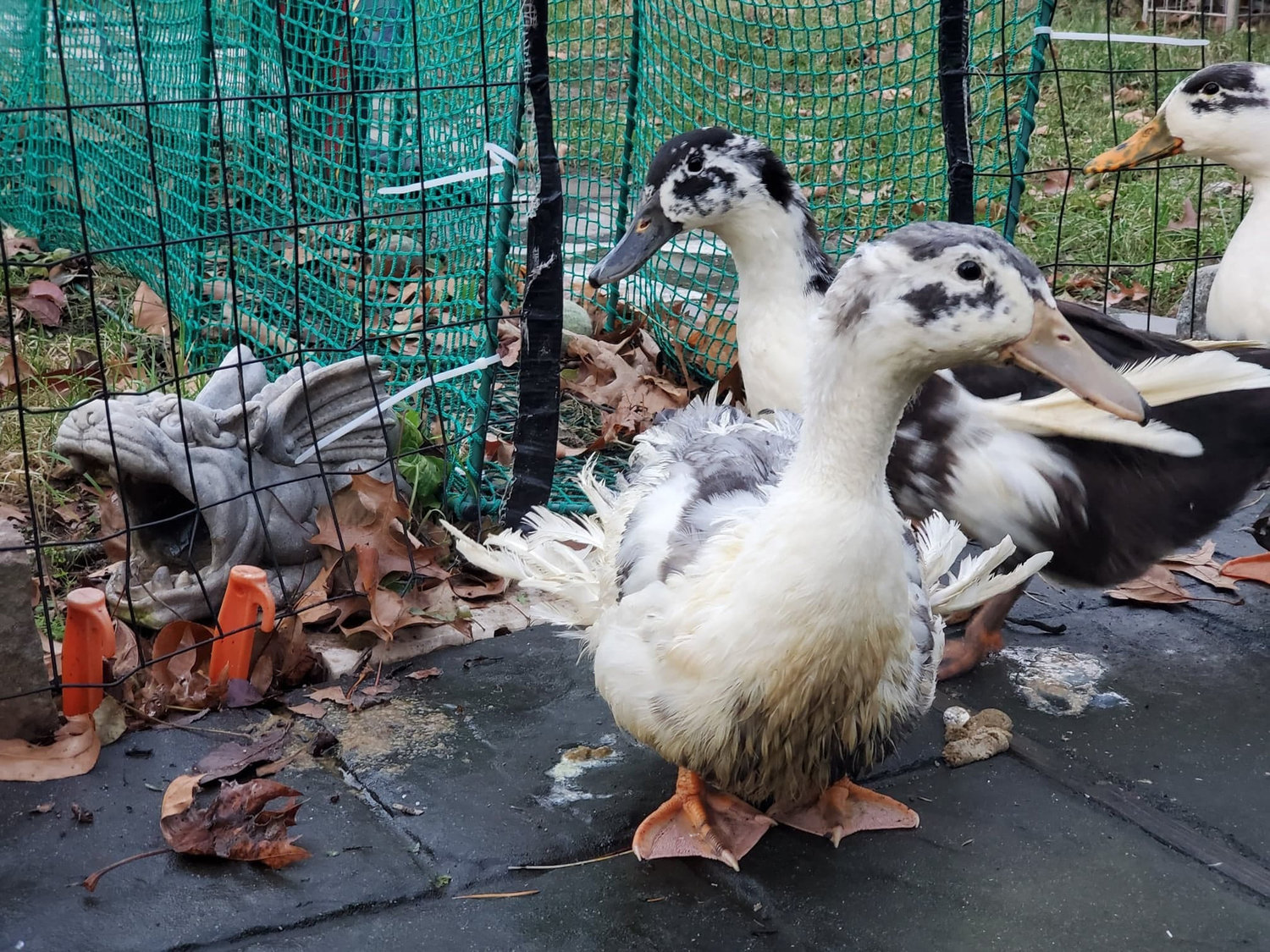 Di Leonardo is keeping several ducks at his home in Malverne until he finds an animal sanctuary for them.
Courtesy LION
Previous Next
By Nakeem Grant

With spring just over two weeks away, the domestic duck-dumping season has begun in the Town of Hempstead.

Activists with Long Island Orchestrating for Nature, also known as LION, an animal advocacy nonprofit, rescued more than 100 domestic ducks that were abandoned in the township last year, including about 20 in West Hempstead.

“We’ve taken it upon ourselves to visit Hall’s Pond Park a few times a week just to look around there, because it’s such a common dumping site — more so in recent years,” said LION’s founder and president, John Di Leonardo, an anthrozoologist and a licensed wildlife rehabilitator.

The rescuees in West Hempstead have included ducks with broken wings, leg injuries, bacterial infections, vitamin deficiencies, fishing hooks lodged in their beaks, missing molts, mutilated beaks and other health issues. Many more died before the group could rescue them, Di Leonardo, of Malverne, said.

And there are still more domestic ducks out there that activists plan to rescue.

“They’re all in danger, and none of them will ever survive long-term,” Di Leonardo said, “especially during this season.”

In any given year, from Easter through September, following school hatching projects, domestic ducks are dumped into local ponds and parks and abandoned. Di Leonardo said they are often spring impulse purchases or “careless” Easter gifts.

But the problem has worsened since the onset of the coronavirus pandemic, Di Leonardo said, because many people have taken part in home hatching projects to keep their children busy.

“Domestic ducks are thinking, feeling individuals, not school science experiments, Easter props or objects to be discarded like trash,” he said. “Abandoning domestic fowl is cruel and illegal, and no different than abandoning a dog or a cat. When they’re abandoned to fend for themselves, they often freeze to death, starve or are killed by predators, as they lack the skills to adequately forage and the ability to fly or migrate.”

Non-native species can also spread disease to the wild birds. When domestic ducks and geese breed with wild birds, their offspring tend to be flightless as well, further disrupting the pond ecosystem and exposing the young to the same dangers as their domestic parents.

According to the National Park Service, invasive species often cause the loss of native biodiversity, and the agency notes that invasive animal species often start out as pets.

The duck breeds that LION activists have rescued from West Hempstead over the past year include mallards and Muscovies. Di Leonardo works to rehabilitate the ducks after they are rescued.

“These domestics just can’t fend for themselves,” he said. “Something as simple as a waterfall could be deadly for them.”

Many of Hall’s Pond’s regular visitors, or “pond watchers,” Di Leonardo said, have contacted LION on numerous occasions to report injured or misplaced ducks. Elliot Speiser, of West Hempstead, who visits the park almost every week, said he spotted a Muscovy there in January. He reported it to Di Leonardo, and soon afterward decided to become a volunteer for the group.

“I really like to help animals in need,” said Speiser, a freshman at the Fashion Institute of Technology in New York City. “I think it’s important for us to take the initiative. The problem is, I don’t think a lot of people know who to contact, and they think that someone else will handle it. You can Google local rescues, or simply ask around.”

Speiser said he hoped to get his wildlife rehabilitator license later this year so he can legally take care of an abandoned animal if he is unable to get to a rescue right away.

Woodmere resident Beth Rudetsky, who also frequents parks in Nassau County, helped to report a couple that was planning to dump two ducks at Hall’s Pond in October. She said she hoped more people would step up to support wildlife.

“The average person won’t notice everything that’s wrong with a bird or duck at the park,” Rudetsky said. “We don’t expect people to be investigators, but that’s why we spread the word as much as we can.”