Opinions differ on cause of anti-Semitic incident 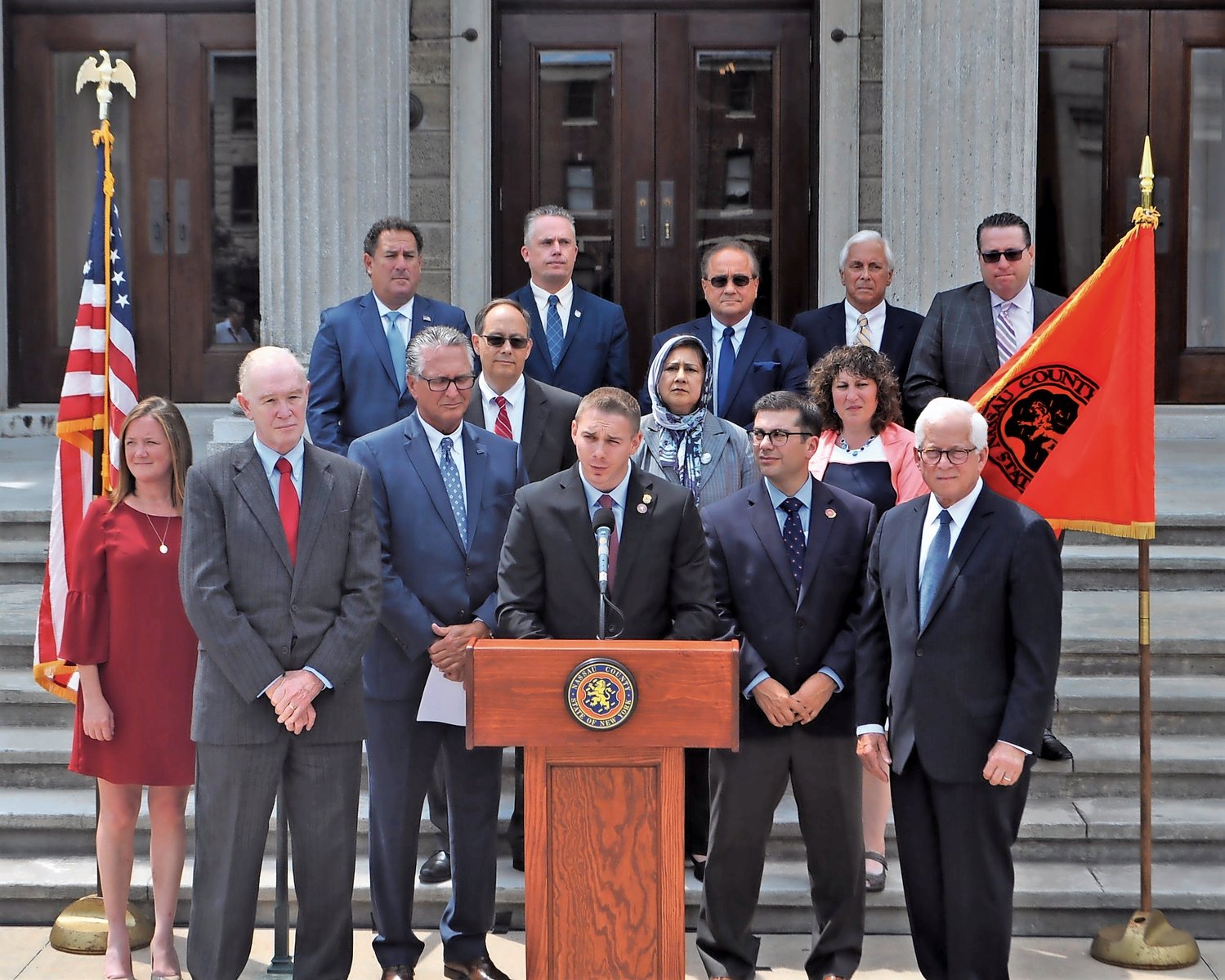 For some, the anti-Semitic incident was personal. The discovery of seven 10-inch swastikas scrawled in purple marker on the walls of the picnic pavilion at Oyster Bay’s Theodore Roosevelt Park on Aug. 8 brought back terrible and terrifying memories, the speakers at an Aug. 9 news conference noted.

Standing outside the Nassau County Legislature, they said they had family members who were killed and tortured by the Nazis during World War II

County Legislator Josh Lafazan, an Independent from Woodbury, held the news conference to announce that a $20,000 reward was being offered for information leading to the arrest of those responsible for the act.

Lafazan, 25, spoke of his grandfather, Boris, who was a Holocaust survivor. The swastikas, he said, brought much pain to his family and families like his.

State Assemblyman Chuck Lavine, a Democrat from Glen Cove, shared Lafazan’s pain, recalling an incident when his grandmother watched while hiding in a hay wagon as her friends were butchered by the Nazis. His other grandmother was fortunate. She was able to make her way to the United States after all of her 14 brothers and sisters were killed by the Nazis. Their “crime,” he said, was being Jewish.

Deputy Presiding Officer Howard Kopel, a Republican from Lawrence, said that he too had relatives who suffered during the holocaust, and some who died.

But the speakers did not all agree on what caused the incident.

Lafazan said that words and actions matter. “More importantly, inaction matters,” he said. “If you hear a friend make a derogatory comment, speak up.”

Kopel, who represents the largest Jewish community in Nassau County, said that people should “stop pointing fingers. It is not the fault of the white supremacists,” he said, or the fault of politicians who people suspect support white supremacy. “We have to look to ourselves, our community, our schools. It starts at home and at schools.”

Kopel even went as far as to say that he doesn’t believe there is discrimination or anti-Semitism in Nassau County.

Lavine disagreed, saying that there is “too much hate speech in our nation, and it comes from the top and seeps down to local levels.”

After the news conference, Lavine said he and others were upset by Kopel’s remarks.

“While Legislator Kopel was speaking, I was looking out at the faces of people, and I could tell some were distressed at his remarks, as was I,” Lavine said. “Saying white supremacists are not to blame? I can’t stand by and not take issue to that. They feel enabled, and President Trump does everything he can to empower them.”

Bayville Deputy Mayor David Wright, who along with Bayville Trustee Bob Nigro, was invited to participate in the news conference, said that everyone spoke appropriately. “They were a very diverse group of people with their own take,” Wright said. “I don’t’ agree that hate speech is the problem. I think it was kids who don’t understand how hateful that symbol is. If it was an adult, I think they are a disturbed individual.”

He added that he hasn’t seen an increase in hate speech.

Nigro agreed that the perpetrator was probably a child. “I think it’s a stupid kid who doesn’t have any concept of what it signifies,” he said. “But that doesn’t excuse it. They have to learn. I’m disappointed in a system that doesn’t teach kids what happened during World War II.”

People need to be reminded of what the swastikas symbolized, he added.

“I believe in free speech but that’s not what this incident was,” Nigro said.