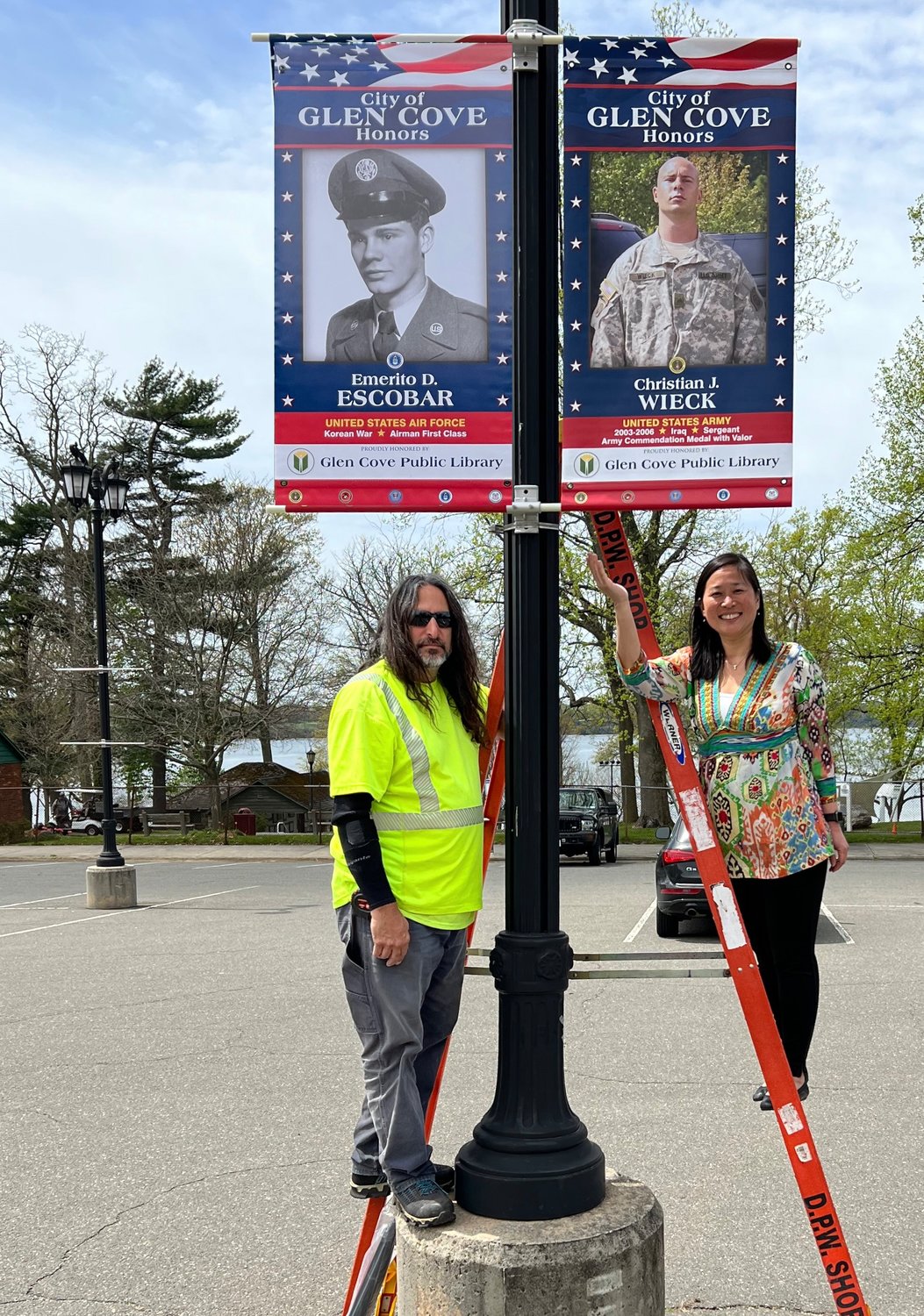 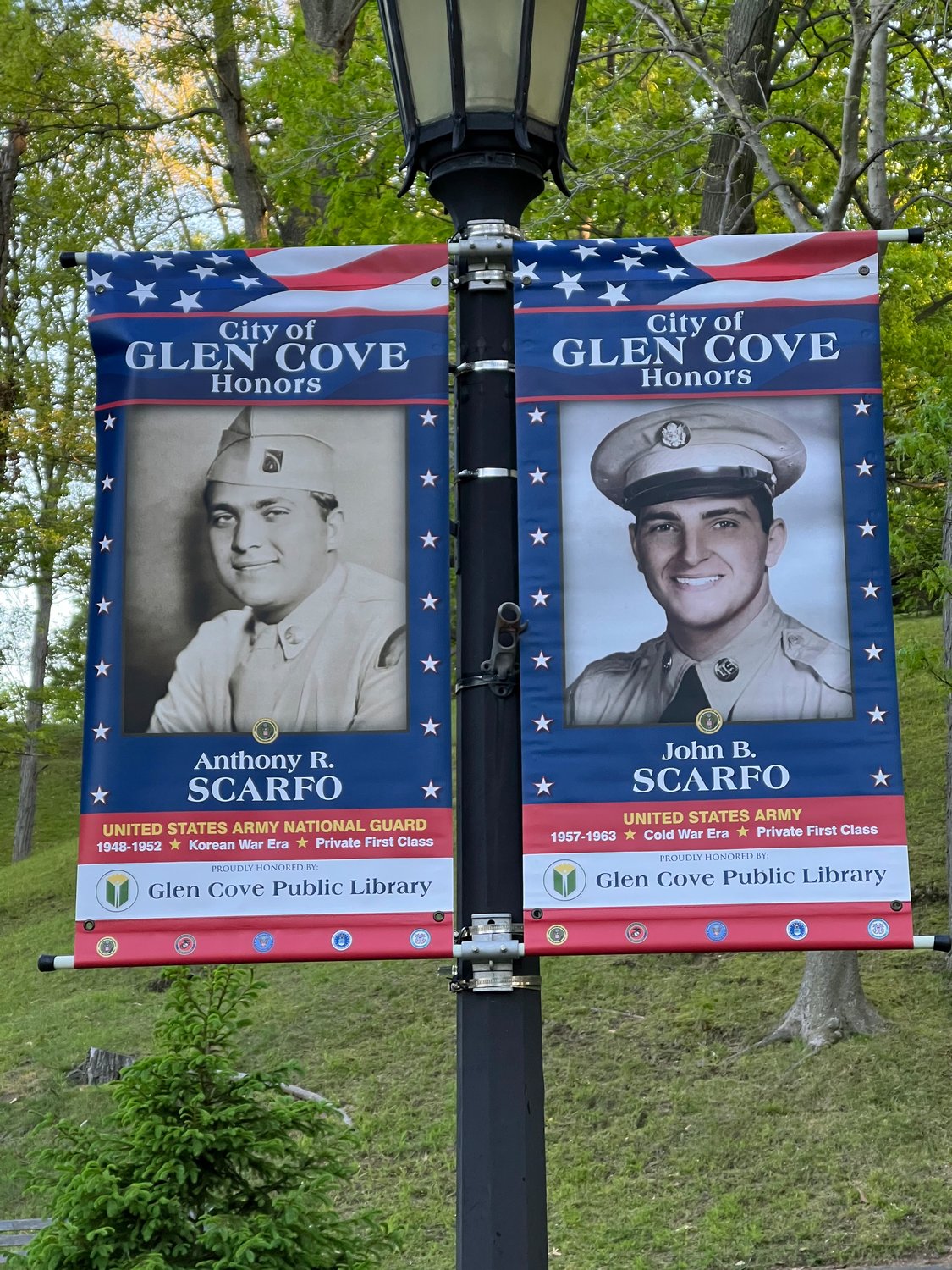 The Scarfo family, of Glen Cove, has banners dedicated to the late brothers Joseph, John and Anthony Scarfo. Anthony’s and John’s are hanging next to each other.
Courtesy GSM Communications
Previous Next
Virtual veteran banner experience

offers a virtual tour of the

banners of veterans on display

in Morgan Park. Go to

www.glencovelibraryhistoryroom.com/about-1 to view the banners and their stories.

The City of Glen Cove is honoring its veterans on Memorial Day weekend with a display of banners imprinted with photos of them. The public library, the Veterans Affairs office and the Public Works Department installed 52 banners across Morgan Park on May 3 as part of an effort called “Glen Cove Salutes.”

“It was a lot of work, but it was worth it, because these are the men and women of our military,” Ralph Comitino, president of the Glen Cove Public Works Civil Service Employees Association, said.

Lydia Wen, the librarian who spearheaded the banner initiative, created a virtual tour in which families can upload the reflections of their loved ones and see additional photos of them.

“The reflection is a combination of prose and also pictures,” Wen explained. “In some cases, it’s scanned pages of books that have featured the veteran.”

To start off the city’s tradition of laying wreaths at veterans’ monuments for Memorial Day, there will be an unveiling ceremony for the banners at noon on May 29 at the veterans memorial by the entrance to Morgan Park at the corner of Landing Road and Germaine Street.

The Scarfo family has three banners dedicated to the late brothers Joseph, John and Anthony Scarfo. Rosemary Maneri, Joseph’s daughter, wanted to pay tribute to her father and his pride in serving his country, and encouraged her cousins, the children of John and Anthony, to do the same.

“I saw the military banner that Lydia [Wen] had posted, and I wanted to do it for my dad,” Maneri said. “And then his brothers came to my mind, so I contacted my cousins, and we were all in agreement. We wanted all three of them up.”

The family emigrated from Italy in 1937. Deneen Jackson, John Scarfo’s daughter, said that service was the brothers’ way of giving thanks to the United States.

“My father was the only one born here,” Jackson said. “So their contribution to America was to fight for their country and to give back, to thank them for letting them have a wonderful life here in America.”

While her father did not keep any records of his service, Jackson said, she knows that he served in the Army until he was discharged in 1963.

“Our father was the rock of our family,” she said. “He was the best. The best father anybody could ever have.”

Joseph Scarfo, who died in 2011, kept records of his time in the Army in World War II, which Maneri used when writing his story for the library’s virtual tour.

“It wasn’t hard at all because my father wrote down everything,” Maneri said. “He was very good at that stuff. He was meticulous, and he documented everything.”

Joseph Scarfo was working at Republic Airport in 1942 when he was drafted into the Army. He was sent to France as part of the Timberwolf Division of the 413th K Company, known for their night fighting.

While searching a house in Cologne, Germany, on his 23rd birthday in March 1944, Scarfo was hit with shrapnel from a bomb, and was left paralyzed from the waist down.

He was honorably discharged in 1946, and returned home to Bella Vista in Glen Cove. He served as grand marshal of the Memorial Day Parade in 1987.

“He was proud of his country,” Maneri said. “And he always said he could do it again.”

Her father’s banner hangs near those of his brothers. Maneri said when she saw it for the first time on Tuesday with her husband and daughter, she was so emotional that she couldn’t speak. “Seeing those banners up, and remembering not just them, but all the Glen Covers that served, I think is a well-deserved tribute,” she said.

Comitino said he was honored to install the banners. The project hit close to home for him because his father served in the military as well. “He’s not here now,” Comitino said, “but my father would have been proud.”

Wen expects to add more banners next year.  If all of those that have been created return and more are added, she hopes to have at least 92 hanging next year. “I have a waitlist started already,” she said.

The virtual tour will soon include a map for visitors to use at the park to use, with a QR code to indicate the location of every banner.

The ongoing project will continue, as Wen collects more veterans’ stories. And the banners will remain up until Veterans Day.

“From an archival perspective, I want the stories behind each one,” she said. “It’s wonderful to have a picture of who they were [and] how they are remembered.”