Making magic despite the obstacles 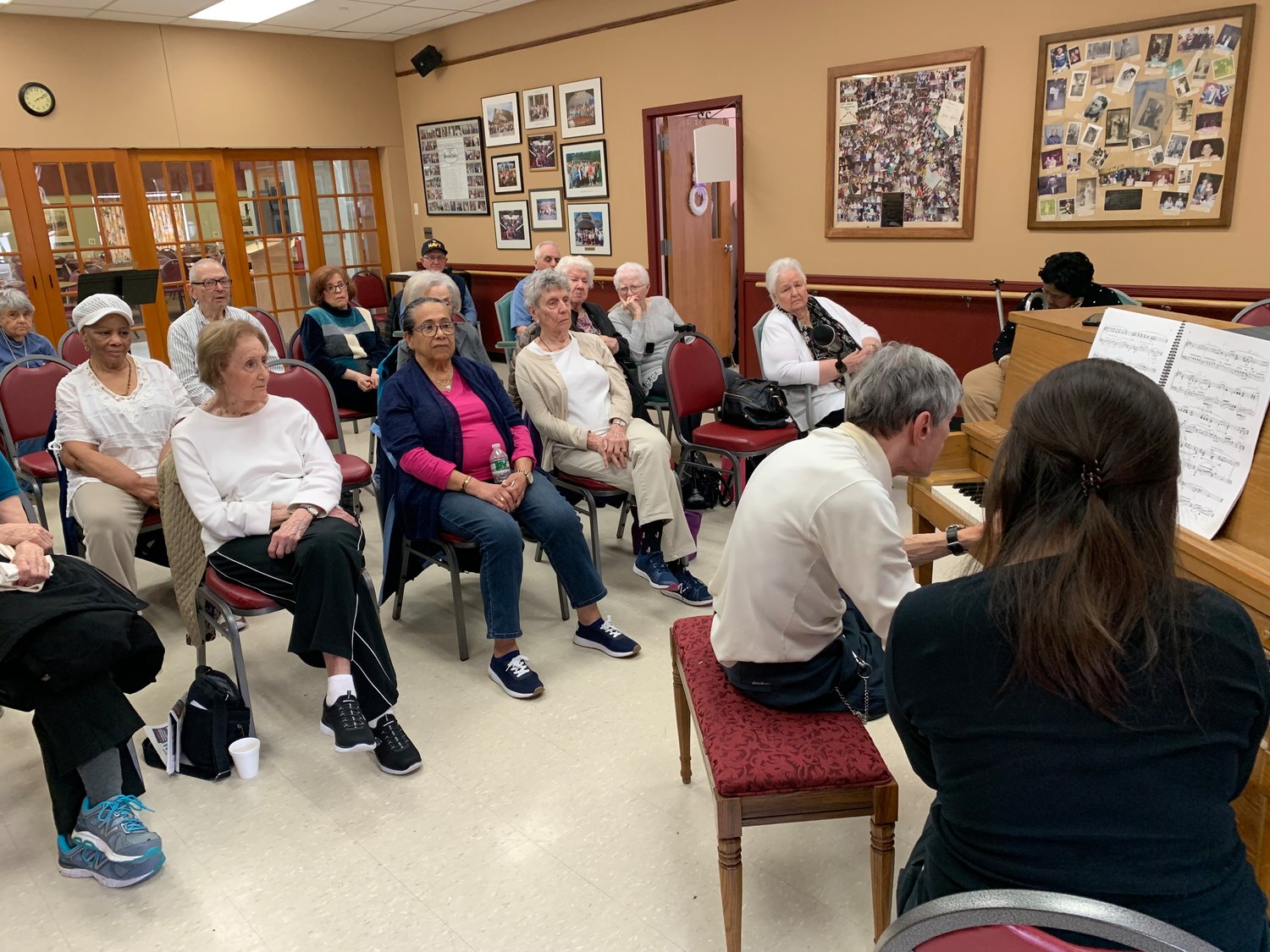 Although the audience for Holzman’s performance at the senior center wasn’t large, several people had strong emotional responses to the music.
Mike Conn/Herald Gazette 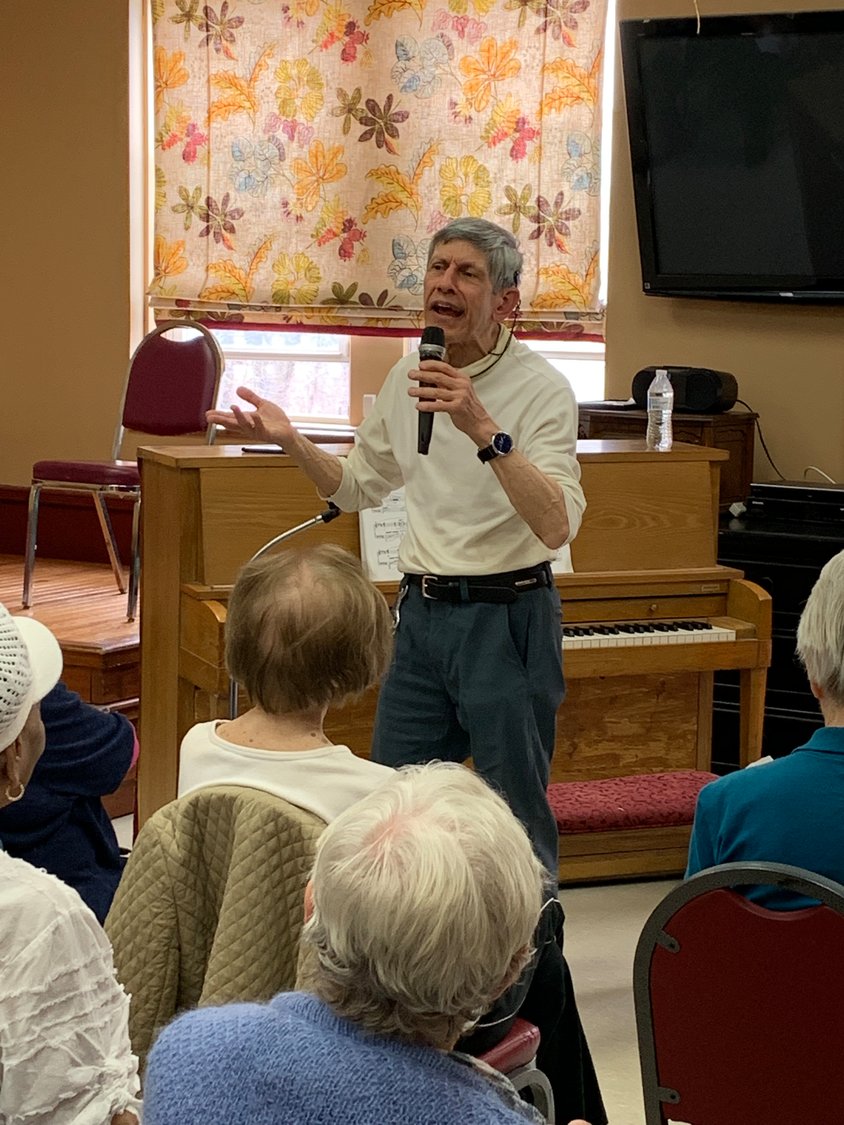 In between songs, Holzman told the audience about his music, and his journey through life with epilepsy and hearing loss.
Mike Conn/Herald Gazette
Previous Next
By Mike Conn

If you’d walked into the Glen Cove Senior Center early in the afternoon last Friday, you would’ve had to listen hard to hear the notes emanating from David Holzman’s piano dancing in the air. But before long, you would’ve begun to hear the power behind his music as his fingers flew across the keys. And if you’d sat down with the audience of just a couple of dozen lucky people, you more than likely would have become enraptured by his dazzling technique and his ability to stir his listeners’ emotions.

Holzman, 69, is a full-time musician who earned a Grammy nomination in 2003 for Best Classical Music Soloist. But it was the story he told the seniors in between songs that makes his talent all the more singular. He has had limited hearing throughout his life, complicating his pursuit of a career in music. He also has severe epilepsy, and lives with the ever-present possibility of a seizure, even during his performances.

Holzman, 69, was diagnosed with epilepsy when he was 18. Since his teenage years he has been prone to seizures, which he describes as explosions of the brain, although at first they weren’t too troubling. When he suffered a seizure during a concert as an adult, however, his condition began to affect his career. Most of the negative effects, he said, were the result of the medications he needed.

“The medicines that I took meant that I could not think quickly enough,” Holzman explained. “I lost the ability to be at full speed, and also, simply, I lost the ability to focus.” After mixing and matching medications over the years, he has finally settled on one that helps keep the seizures in check while allowing him to perform at his best.

He began to lose his hearing, he recalled, at about age 8, as a result of an undiagnosed virus in his left ear. The nerves in that ear were damaged, and for the next 30 years he essentially lived with one ear before he began wearing a hearing aid. “It damaged my life much more than I ever let myself know,” he said, explaining that social interactions in which he had to pretend to hear people were the most difficult part of his hearing loss.

But he never let his hearing loss deter him from pursuing his love of music, he said. With the hearing aid, he was able to pick up on mistakes he made earlier in his career, and that has helped him perfect his craft.

Loretta Murray, the executive director of Mill Neck services for the deaf and hard-of-hearing, in Bohemia, explained that you don’t necessarily need to hear to enjoy music. A late-deafened adult herself, Murray said, “Music is a universal language that can be adapted for any community. It is a sensory experience that people can enjoy.”

As Holzman played at the senior center last week, several audience members began to cry, and told him that his music elicited unexpected feelings. He replied that their tears shouldn’t be a source of shame. Rather, he said, “Tears don’t mean you’re sad, [they mean] your emotions are overflowing.”

He also told them about the importance of his body while he plays. “It’s like I’m using a different part of my body for each emotion,” he said, later adding, “I don’t hear, so I need to be conscious of my body” — which is why he usually plays with his eyes closed.

Several seniors said afterward that Holzman’s performance was an inspiration. Leatrice Lees, 93, whose late husband, Benjamin, was a composer, said that Holzman’s mastery was indicative of the perseverance a musical career requires. “It’s his life,” she said, “and when you’re a musician, that’s it.”

Janina Jania, 84, who was moved to tears as Holzman played, said that his music took her back to her childhood in Eastern Europe. “This was one of the best things I’ve heard in my life,” she said. “I have no words for it.”

Carol Waldman, the center’s executive director, said that Holzman’s performance was a pleasure — not only his music, but also the message he shared with his listeners. “It doesn’t matter if you’re struggling with a disability,” said Waldman. “If you have the right attitude and the right opportunities for yourself, you can make magic.”

Holzman said that playing at the center was a joy. “Nothing gives me greater pleasure than being able to give life to others,” he said, adding that he loves eliciting such strong emotional responses, and that that has helped fuel his own passion for music for so long.

He concluded that one of the keys to life — one with or without a disabilities — is to maintain confidence in yourself despite adversity. “You can’t let the world around you . . . damage your sense of self-worth,” he said.