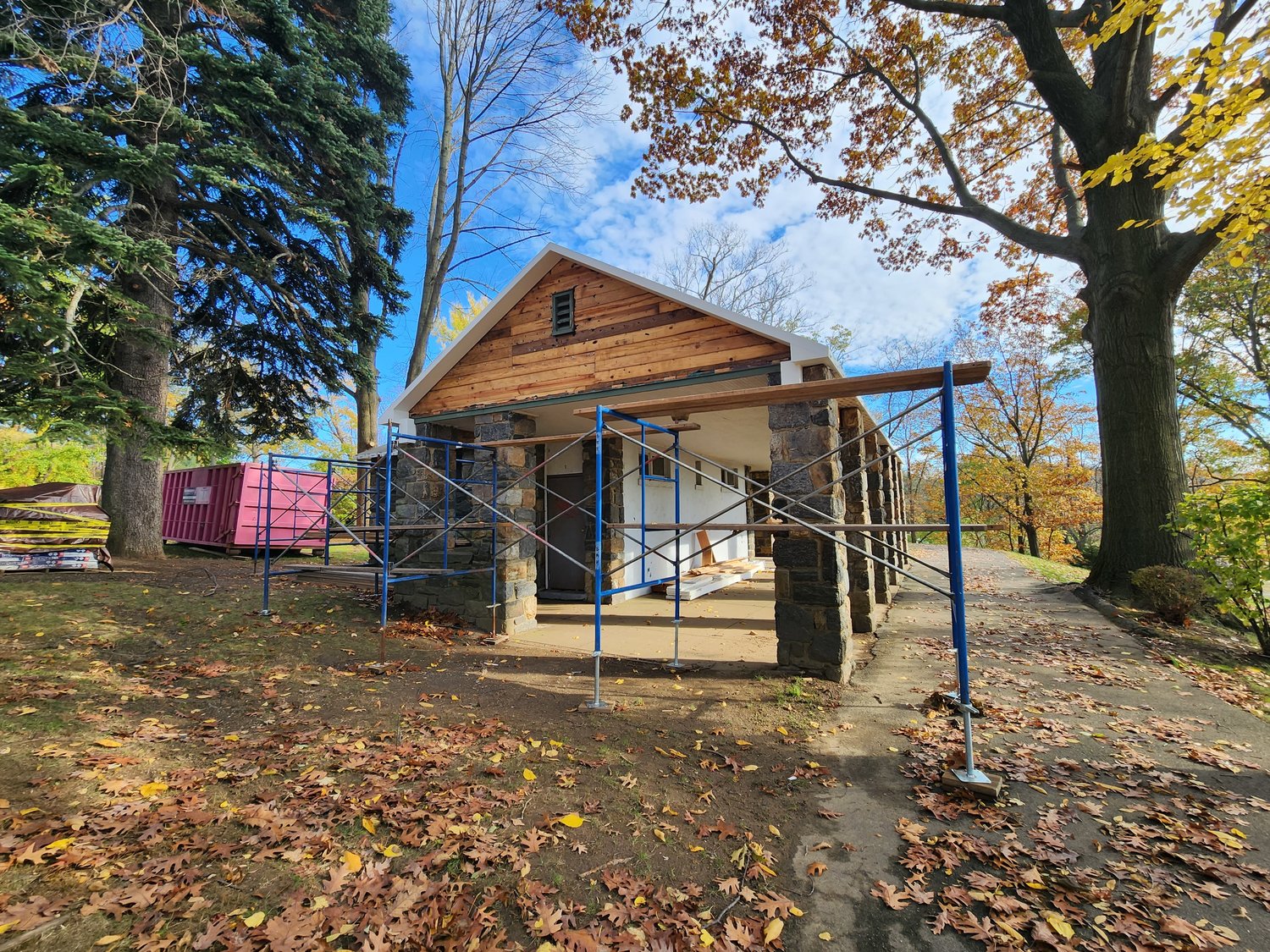 Morgan Park’s upper bathhouse is currently under renovations. The building needs extensive repair to its roof and plumbing.
Courtesy Rocco Graziosi
By Roksana Amid

In 1926, J.P. Morgan Jr. wrote a letter to Glen Cove Mayor William Seaman requesting that a portion of his property at the end of Landing Road be converted into a free public park. This gesture was meant to commemorate the passing of the financier’s wife and remains a mainstay for the community. The park has fostered new memories, with visitors enjoying many community events and special occasions. The park also offers a calm place to enjoy casual walks along the shoreline of the Long Island Sound.

Much of the park’s structure has remained unchanged for 86 years, until Hurricane Sandy struck Long Island in 2012, damaging the parks seawall and restrooms.  To amend this, the City Council approved a bid in April of 2017 to renovate the park, but the project was scrapped after the city had paid a contractor more than $150,000 without ever actually signing a contract. It took a year for the mix-up to be noticed leading to the contractors being ousted.

Spiro Tsirkas, director of Glen Cove Youth Services and Recreation said that continuing renovations to the park was a matter of the timing and that the coronavirus pandemic postponed much of those efforts.

Glen Cove residents like Jill Nossa, said the existence of Morgan Park was the main reason she bought a home in Glen Cove. Yet, she had always felt embarrassed by the park’s aesthetics, a location that regularly draws performers and visitors for the summer music festival and Gold Coast Cruisers car show.

“I’ve never understood how this park is always touted as an asset of the city and yet the bathrooms have been allowed to fall in such a state of disrepair for so long,” she said.

Nossa said she was thrilled when the lower bathhouse was renovated and is glad that the upper bathhouse is getting long overdue attention.

The upper bathhouse has been closed for four years because of its rotting roof and subsequent water-damage, leaving the entire structure unusable. Rocco Graziosi, project manager and storm water management officer for the city’s department of public works, said repairs to the roof and plumbing have already started.

Engineers estimate renovations to the upper bathhouse to be around $350,000, but Graziosi said the city believes that the cost could be lower.

Repairs to the park’s seawall have also started, as well as the to the steps past the seawall that had collapsed the previous year, with costs estimated at roughly  $500,000.

“The water was getting in from behind the wall and it was starting to collapse,” Graziosi said. “Some of the stones in the wall were getting very close to collapsing.”

A concrete gutter was installed at the seawall last week, and a concrete path along the wall is set to be repaved in the coming weeks.

Graziosi emphasized that Mayor Pamela Panzenbeck has been supportive and also advocated for improvements to the park.

“I think we’re on the right track to correcting a decent amount of issues over the course of the next few months,” Graziosi said.