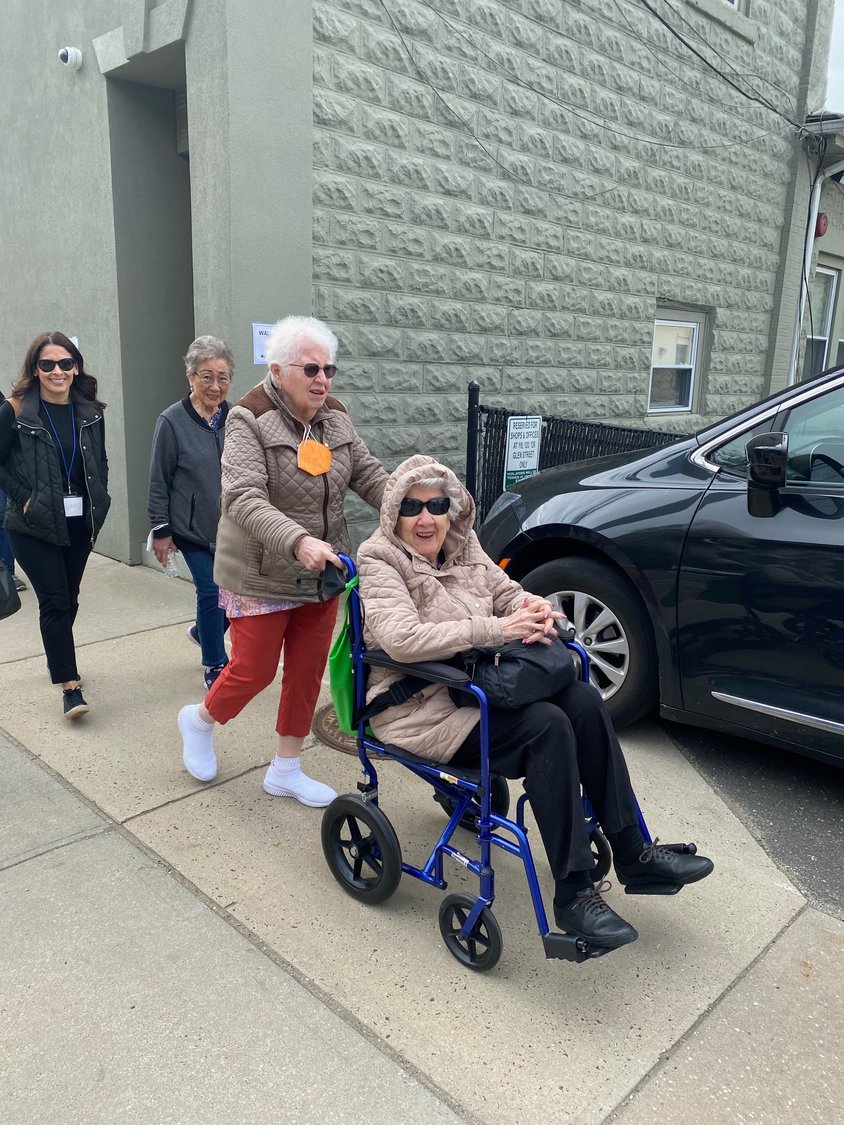 Sally Dimiceoi pushed her longtime friend Mimi Simonetti in a wheelchair down Glen Street during Walk with a Doc on May 11, which started at the Glen Cove Senior Center.
Letisha Dass/Herald
By Letisha Dass

Advanced age didn’t stop two friends from enjoying exercise and receiving free one-on-one medical tips from a doctor in Glen Cove.
Sally Dimiceoi, 79, of Glen Head, pushed her longtime friend and housemate Mimi Simometti, 95, of Glen Head, in her wheelchair down Glen Street to downtown.
Walking alongside them on their May 11 stroll was Dr. Barbara Keber, chair of Family Medicine at Glen Cove Hospital. The ladies were given the opportunity to ask medical questions and learn how to improve their health, all while safely exercising.
“We enjoyed it,” Dimiceoi said. “I don't get the opportunity to get out often, so this is a good opportunity.”
The educational experience was part of the age-friendly program, “Walk with a Doc,” which first came to Glen Cove last year but Covid concerns reduced the walks to just one. The rest were virtual, with Keber posting videos giving advice while walking. This year, most of the walks will be in-person, giving seniors a chance to ask Keber questions.


“We're so excited that we're able to do an in-person walk, especially since Dr. Keber has been so supportive of us the entire time whether virtually or in person,” Christine Rice, executive director of the senior center said.
Leisurely exercise, according to Keber, is important because it can help prevent heart disease, cancer, boost mental health, and cognition in seniors.
“Walking is a great exercise for those who can do it,” Keber said. “Even if you walk short distances, or short amounts of time, they add up. And that really has many, many health benefits.”
The idea for the initiative has been in the works for years, said Carol Waldman, consultant for Glen Cove Age Friendly and the former director of the senior center. With the assistance of Nassau County Office for the Aging, state grants have been secured to implement the ideas. However, the senior center is searching for additional grants to continue their programs.
“People will be getting to see what we're doing, how we're trying to help the community and the whole goal is to get everybody on board,” Waldman said.
The Walk with a Doc program started in 2005 by Dr. David Sabgir, a cardiologist in Columbus, Ohio. Since, then the chapter has grown to over 500 chapters globally, including Glen Cove.
“The purpose of Walk with the Doc is really to make the general population very comfortable just talking [and] having a conversation with a physician,” Keber said.
Glen Cove’s chapter is powered by the City of Glen Cove and was initiated by Age-Friendly Glen Cove, a division of the Nassau County Age Friendly Center of Excellence.
The walk began at the senior center on Glen Street and the group of walkers made their way downtown by Pulaski Street.
“To have it start here at the senior center is very meaningful,” Christina Rice, executive director of the center said. “Our seniors are so excited about it.”
As a bonus, members of the New York Coalition of Transportation Safety led the group offering advice on the best way to walk and how to abide by state pedestrian laws.
Helpful tips were given such as: walking in the direction of ongoing traffic to see passing vehicles; wearing close-toed shoes to prevent tripping; wearing sunscreen and a hat for protection against the sun; and paying attention to surroundings to prevent accidentally falling.
The Glen Cove Age Friendly mission is to collaborate with the city to make it welcoming to seniors. One of the walkers, Ann Fangmann, executive director of Glen Cove Community Development Agency and Industrial Development Agency, highlighted the improvements the city has accomplished in making it safe for seniors and the community.
For example, she said, making major crosswalks and parking garages in and around the downtown area American Disability Act compliant, replacing sidewalks with bricks popping out with either concrete or stamped concrete to make smooth walkways, and potentially planting trees to provide shade for pedestrians during the summer are a few of the improvements.
“We try to make little improvements,” Fangmann said. “I think that Glen Street in general, could use some TLC in terms of pedestrian connectivity.”
Report an inappropriate comment