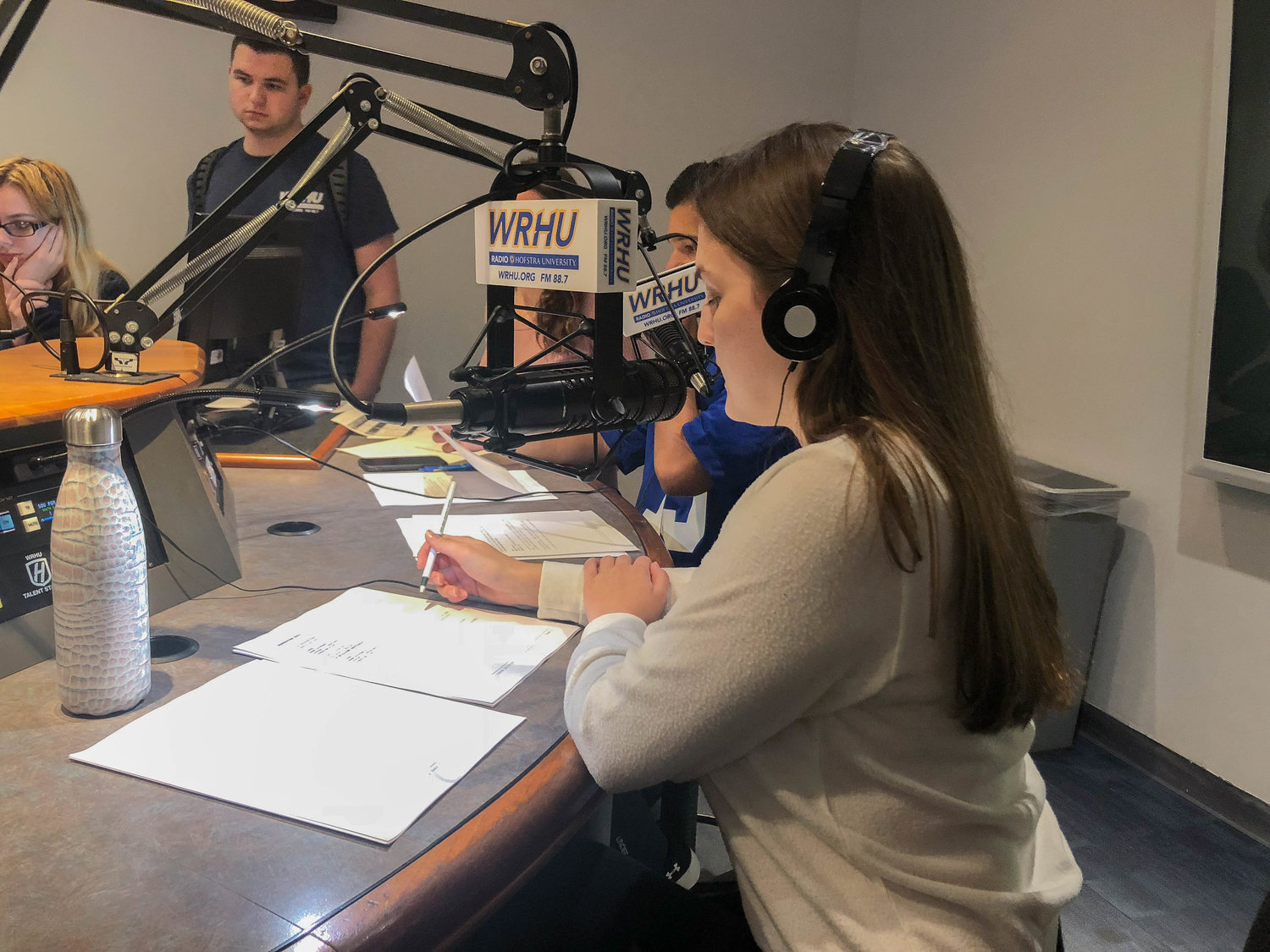 Students can participate in a number of different talk shows at the station, including Hofstra Morning Wake Up Call, Newsline and The Locker Room.
Alexandra Licata/Herald 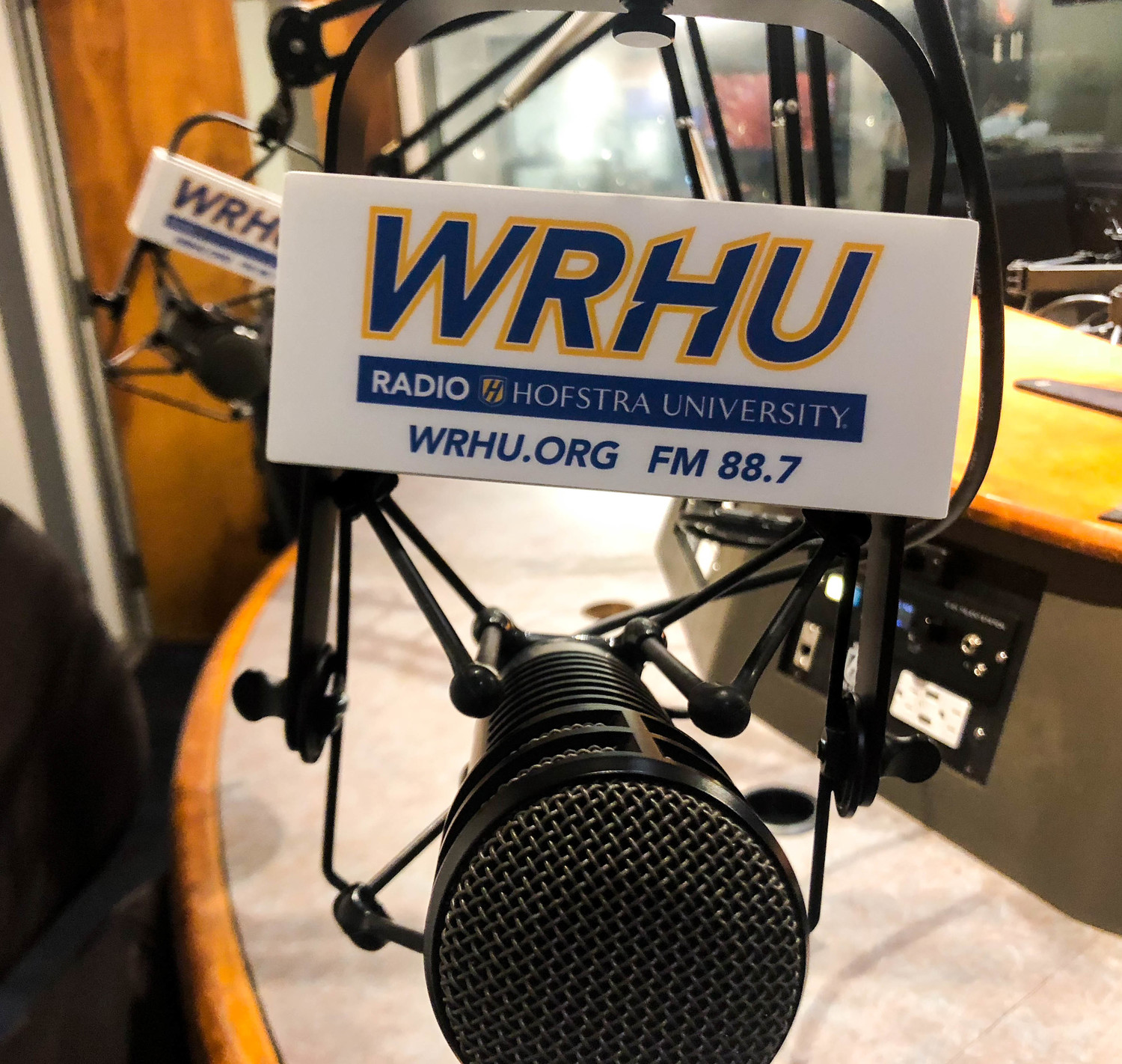 The Lawrence Herbert School of Communication at Hofstra University has a new radio station. The design of the five studios is meant for them to be able to run simultaneously.
Alexandra Licata/Herald 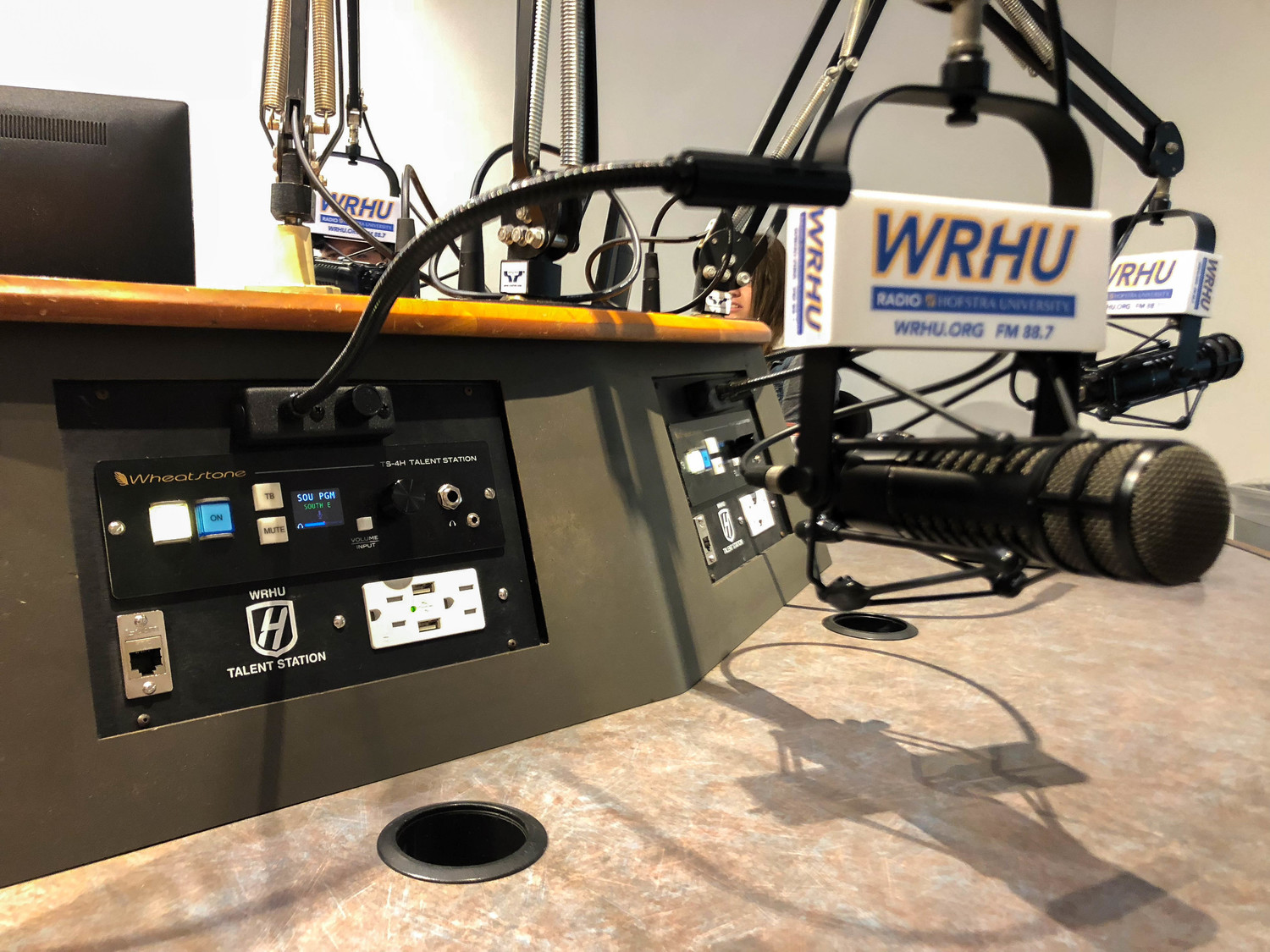 One of the new features in the studios is an 'on' button for each mic. This allows for the hosts to turn themselves on and off to speak on-air, allowing the engineer to focus on the quality of sound, rather than risk the possibility of dead air.
Alexandra Licata/Herald 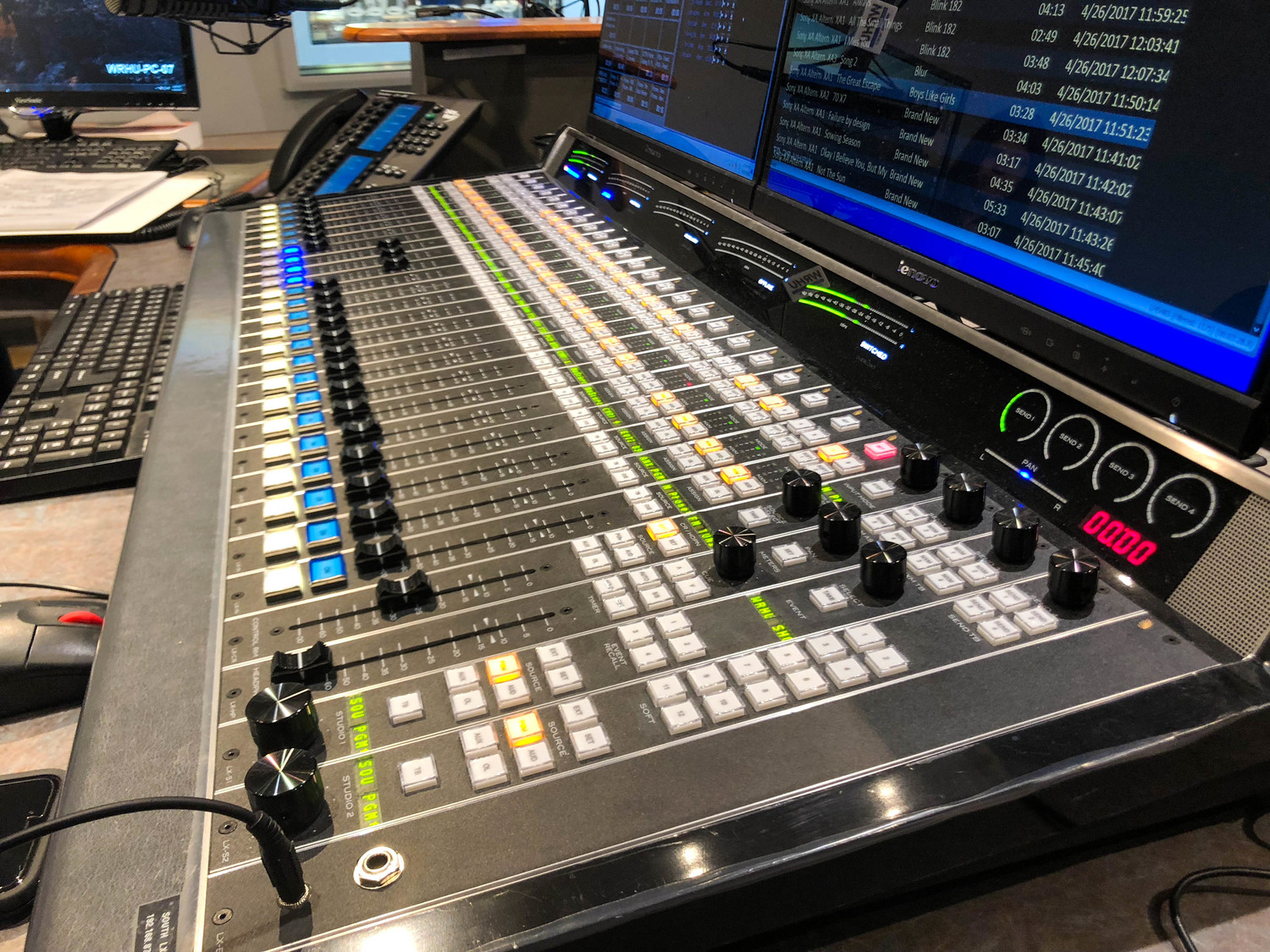 The new Wheatstone board allows students to learn how to operate the equipment used by professionals across the industry.
Alexandra Licata/Herald
Previous Next
WRHU's History

Since 1999, 88.7 FM WRHU had broadcasted out of the same Studio South. On June 7, student staff members signed off from that studio to make way for a major five-studio rebuild with cutting-edge audio, video and social media content capabilities.

In partnership with companies such as Wheatstone, RCS, Comrex, Telos and Multi-Cam, among others, the engineers at the Lawrence Herbert School of Communication developed a concept that would give students a place to learn and serve multiple communities. The studio engineers included Chief Video Engineer Joe Valerio, Video Engineers Joe Giordano and Victor Lazo, Chief Engineer Andy Glading and a handful of students.

The studios are dedicated to Richard Phillip Cavallaro, who was a producer, engineer, anchor and host of WRHU. Cavallaro died on Nov. 17, 2017. He graduated from Hofstra University in 2012 with a degree in information technology. Blind from birth, his love for music and passion for technology helped him to overcome the many obstacles that he faced.

“Everybody loved Richie, and he was a great student,” Director of Operations John Mullen said. “When he left here … he taught blind people how to use technology. It’s really an honor to name the studio after him. I couldn’t think of anybody better to name the studios after than Richie.”

School officials said a studio-wide technology update was needed. While the computers had been upgraded, along with other repairs and upgrades throughout the years, they were still five years out of date. The wiring of the systems was also two decades old.

“The need for the rebuild was also based upon the fact of technology changing and shifting from analog to digital and also shifting in things like how we connect for sports games,” Mullen said.

Studios previously connected to an Integrated Services Digital Network, which is a high-end telephone line, to broadcast sporting events, but will now use a Comrex Bric. It is the same system used by all teams in Major League Baseball, National Hockey League, National Basketball League, and National Football League to connect fans to games.

“A lot of the problems the sports department had were technical,” said WRHU Sports Director Nick Faria. “Equipment would break down. Issues would happen left and right. Now, with the new equipment, everything’s state-of-the-art.”

Another new addition is a Wheatstone Digital Mixing Board. To ease the transition, the mixing board was installed in the Annex, a smaller studio that was used to broadcast content over the summer. This allowed students who are local, or within 30 miles of the station, to learn the new board in July and August and be prepared for the opening of the new studios in September.

While the five studios are beginning to wrap up production, the rebuild came with frustrations and its successes. A rotted wire delayed the original timeline.

“Sometimes when you open up things, you see that the process is going to take a little longer than expected and that is what happened,” Mullen said. “But everything is going along really well now.”

Of the five studios, Studio South is about 80 percent complete. The terminal room, which is the epicenter of the station, is finished. The mixing site, which is to be used for Facebook Live, Studio North and another production area are still under construction.

“It’s like any other rebuild. You’re going to have your ups and downs,” Faria said. “So far, WRHU’s had a good plan, and I think you’re seeing it now … We’re not on schedule, but we’re getting to the point where we need to be.”

Staff members who were unable to take part in programs over the summer spent September learning the equipment and understanding how everything works, as well as learning how to use the new in-studio technology to their advantage.

“I’m extremely excited for the new cameras in the studios,” said junior staff member Michael Vito Valentino. “Each studio will now be Facebook live compatible. This will allow for us to begin creating digital content along with our traditional audio… This will create so many new creative options and really help us all sharpen our skills not only as broadcasters, but as content creators.”

The idea of being a “content creator” is an idea both Faria and Mullen echoed. WRHU is a network that creates programming that goes on WRHU FM, WRHU.org, the Hofstra Athletic Web Channel, gohofstra.com and the NHL Game Center app. It also syndicates content to WFAN in New York City and WRCM on Long Island. Occasionally, staff members will create web-only content. WRHU also converges audio with video through Pride Productions and the Long Island Nets.

“When go to an internship, they’re better prepared than students from colleges that don’t have the industry standard equipment,” Mullen said. “They can use their technology without being trained. And that’s vital. It’s an edge that our students now have.”