A centenarian draws a crowd 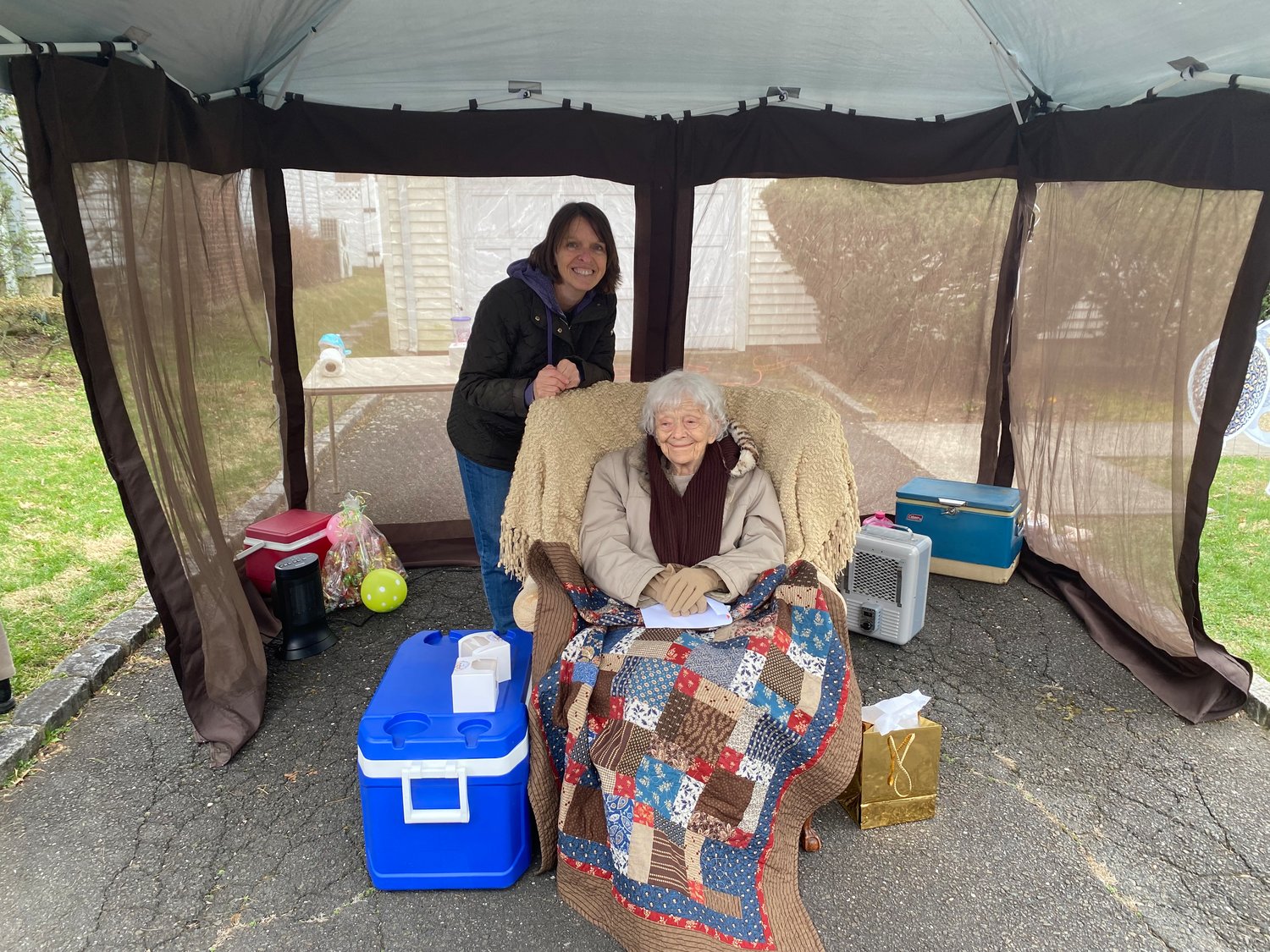 Betty Buckhout celebrated her 100th birthday with her daughter, Gail Meiners, and neighbors who stopped by.
Will Sheeline/Herald
By Will Sheeline

Betty Buckhout found out on March 23, when she turned 100, just how much she is loved in her Glen Head community. A small crowd of friends and neighbors — as well as police and elected leaders — stopped by when her family invited visitors to celebrate the centenarian in her yard.

“We’re so happy to be able to share this day with everyone,” Gail Meiners, Buckhout’s daughter, said.

Buckhout was born on March 23, 1922, in Roslyn Heights. According to her family, her ancestors were some of Roslyn’s earliest settlers, and built many of the first houses in the community.

Buckhout, whose maiden name was Hamilton, came from a family of soldiers: Her maternal grandfather fought in the Civil War, and her father served in World War I. Her husband saw duty in World War II.

Before moving to Glen Head, Buckhout worked in Brooklyn for Decorated Metal, a factory that made cartridges for typewriter ribbons. During World War II the company switched to making reels for parachutes used by paratroopers.

She married William Buckhout, two years her senior, in 1945. They had met at the United Methodist Church in Roslyn Heights. Five years later, their first child, Don, was born, prompting them to move the next year to a house at 59 Smith St. in Glen Head.

To honor their mother’s centenary, Don, her other son, Wayne, and Meiners organized a celebration in the front yard of that house, where she still lives. They set up a tent with a chair, blankets and heating lamps to make sure she was comfortable, and even picked up a bubble machine to make the gathering more festive. They also set up signs reading, “Happy 100th Birthday Betty” and “We [Heart] You.”

William died in 1999, but their family has continued to grow: Betty now has nine grandchildren and eight great-grandchildren, and three more in the latter category are on the way.

Several members of her extended family were there to celebrate their matriarch and hand out homemade cupcakes. Baking has always been an important expression of love in the Buckhout household. Betty once ran a small cake-making business out of her home, making wedding and anniversary desserts for her neighbors. She spent countless hours teaching her children and grandchildren the craft of baking.

Dozens of neighbors stopped by to offer their congratulations. Buckhout’s granddaughter Mary Meiners, one of the relatives who were there to greet the well-wishers, said it was remarkable that so many people came by to celebrate her grandmother.

“She has so much experience — she’s just so amazing,” Mary said. “It’s great to see how many people have come to, like, celebrate her.”

Three Nassau County Police stopped by as well, and officers presented Buckhout with a citation. As if that weren’t enough, Oyster Bay Town Supervisor Joseph Saladino and Councilwoman Vicki Walsh were among the visitors, and Saladino thanked Buckhout for her commitment to her family and the community.

“It’s a great thing to celebrate,” Walsh said. “I mean, how often does somebody turn 100? Betty has so much wisdom, so much experience to pass on to our town.”

“The revelry of all the neighbors coming out speaks volumes about the love the community has for Betty,” Saladino added.

After presenting her with a proclamation, Saladino asked Buckhout what her secret to longevity was. While her family asserted it was her good genes, Betty said it was staying healthy, and love. That’s all one needs to stay young, she said.

“I never smoked and I never drank too much,” she added. “I married the right man and had three beautiful children. That’s all it takes.”