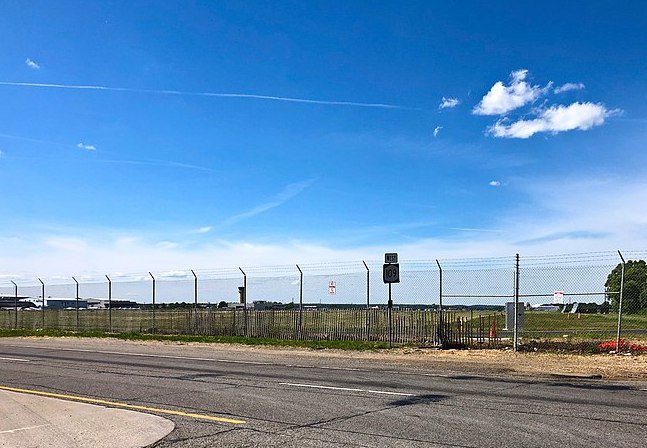 The Covid-19 crisis has interrupted instruction at many local flight schools. Above, a view of Republic Airport in Farmingdale.
Courtesy Bonnachoven/Wikimedia Commons
By Visvajit Sriramrajan

“When Covid-19 hit, survival intuition became important for everyone because individual lives and livelihoods were immediately at stake,” said Bianca Baldwin, head of admissions and enrollment at the Academy of Aviation, a Farmingdale flight school. “We had to react, but there was no script.”

Baldwin noted that the school was closed to the public and secured approval from the Federal Aviation Administration to shift to a digital model of instruction. Flight dispatch procedures were altered to maintain operations while all flight school staff switched to working remotely. Fever and symptom screening for instructors and students was done before pre-check of every aircraft, and before-and-after flight sanitation procedures were carried out on the ramp, as outlined by the federal Centers for Disease Control.

“As a result of Covid-19, we have had to reimagine the flight training world,” said Evan Damadeo, chief flight Instructor at Mid Island Flight School in Ronkonkoma. Damadeo noted that flight training has long been an in-person business, with mostly face-to-face interactions. “At this time, we currently employ many remote technologies in order to minimize our face-to-face interactions to only inside the airplane during a flight lesson,” he said. “This helps to ensure that we maximize safety to our family of employees and our family of customers.”

Although aviation theory can be learned through books, student pilots need to take an FAA practical exam known as a checkride in order to obtain a license. In the United States, a private pilot applicant is required to have documented at least 40 hours of flight time, with at least 20 hours from an instructor and 10 hours of solo flights.

Applicants must also log three hours of cross-country training, 10 takeoffs and landings at three different airports, three hours of basic instrument training, three hours of night flying and experience flying over 150 nautical miles. These requirements, which are even more demanding for those applying for commercial pilot licenses, have brought flight schools practically to a standstill, particularly for immunocompromised students.

“Academy of Aviation offers an F-1 Commercial Pilot Visa with the opportunity to work as a U.S. Certified Flight Instructor upon successful completion of our program,” Baldwin said. “This means that we welcome, teach and employ students from the USA as well as many different countries such as India, Egypt, South Korea, Saudi Arabia and Thailand.” She added that the flight school’s student roster was at its peak before the pandemic, and the schools remains dedicated to upholding a diverse student body.

Ilan Nahoom, the CEO of Flying Helicopters Made Easy, spoke on the diversity of his flight school as well, noting that women and men from various backgrounds are represented in its instructor body. “We have Black people, Native Americans and immigrants from countries like China and India represented in our instructors,” he said.

Nahoom said enrollment has decreased 40 percent during the Covid-19 pandemic, however. “About 70 percent of our students are usually younger people between the ages of 18 and 30 who want to pursue aviation as a career, but we also see people of all ages come in to learn how to fly recreationally,” he said.

Other flight schools in the area have struggled as well. As both a New York City public high school and a Part 147 Federal Aviation Administration Aviation Maintenance Technician School, Aviation High School in Long Island City has had to deal with challenges related to school building closures since March 16.

“All lessons and demonstrations have successfully taken place remotely,” said Steven Jackson, the principal of Aviation High School. “Our enrollment has not been impacted, but our ability to provide our students with the opportunities to finish their required practical hands-on work has been postponed until we can safely resume in-school instruction for students and staff.

“This is a great challenge for all AMTS schools,” he continued, “and we are working in accordance with federal, state and city guidance to determine the safest way to resume our on-site FAA practical courses for the 2020-2021 school year.”

Jackson noted that Aviation High School is one of New York’s most diverse schools. According to the National Center for Education Statistics, the high school had respectively 3.9 and 4.9 percent more Asian and Hispanic students than white students. Out of 2,097 students in 2019, only 193 students were white, thereby facilitating a direct path to the aviation industry for students of color.

Nahoom added that greater representation within his flight school in relation to other flight schools was largely due to its location. The school is based out of Farmingdale, which as of the 2010 census was 71.1 percent white with the remaining 28.9 percent comprising Hispanic, Black and Asian residents.

“The demographics of an area like Farmingdale is different than towns in upstate New York or interior Suffolk County,” Nahoom said. The town is also home to the 78-acre Republic Airport and Farmingdale State College of the State University of New York system, which operates an aviation studies program in close proximity to the regional airport, making it easier for students to access aviation education.