Doggies indulge in whipped cream for a good cause 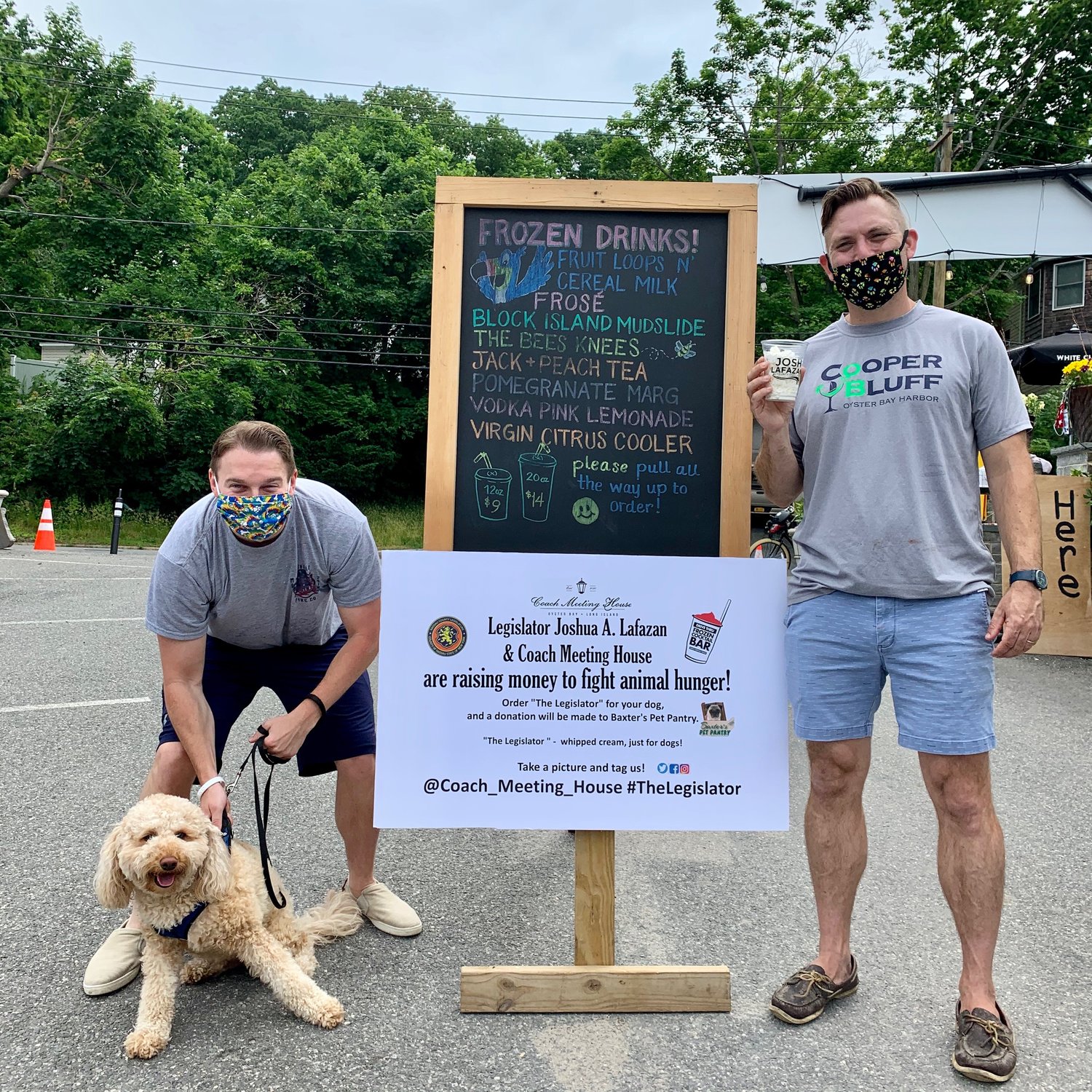 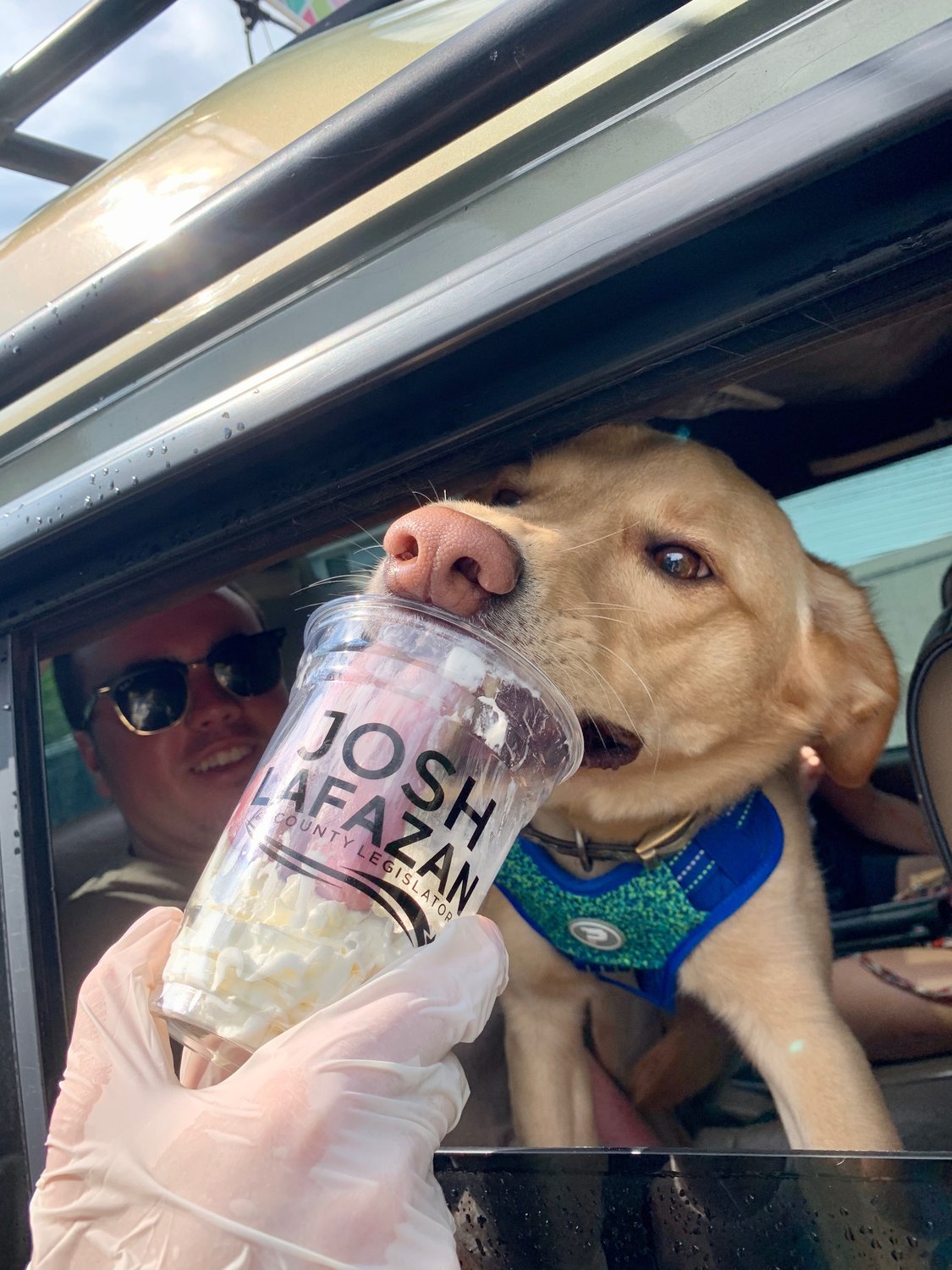 This fundraiser is one that benefits all pets involved, with this dog enjoying whipped cream from a cup branded with Coach Meeting House’ and Nassau County Legislator Josh Lafazan’s name.
Courtesy Coach Meeting House
Previous Next
By Jennifer Corr

A “Puppuccino,” a free cup of whipped cream, can be ordered at select Starbucks for dogs and it’s a big hit among canines. Nassau County Legislator Josh Lafazan, a dog-lover, wanted to bring the dog-friendly treat to the North Shore for a good cause.

“With my dog, we go for Puppuccinos all the time and during the pandemic I had to take him to the drive-thru Starbucks in Suffolk County,” Lafazan said. So, he called his friend, Rustan Lundstrum, the owner of Coach Meeting House asking what he thought of an idea he was considering.

Lundstrum and Lafazan teamed up to host a fundraiser at Coach Meeting House in late April that raised $1,000 for The People’s Pantry in Oyster Bay, a local food bank.

And now, all summer long, customers can bring their dogs to the drive-thru restaurant and bar for “The Legislator,” a $1 cup of whipped cream at Coach Meeting House with 100 percent of the proceeds going to The Long Island Care’s Baxter’s Pet Pantry.

Baxter’s Pet Pantry, according to the Long Island Care’s website, was developed in partnership with Animal Relief Fund Inc. to make free pet food and pet supplies available to pet-owners that are in need from Nassau County and Suffolk County. Donations of the food and supplies are supplied by large corporations like Walmart and Costco and the grants are from various organizations like the Petco Foundation.

“What’s so special is that we actually had people who donated dog food as well as the monetary proceeds that will go to Baxter’s Pet Pantry,” Lafazan said. “Long Island Cares sets up food pantries so that the food insecure can get food; they do the same thing for pets who are food insecure because of the financial situation their owners are in. To me, it was really powerful to make sure that pets in our community gets fed, to make sure they are taken care of and to give a voice to the voiceless.”

Paule Patcher, the CEO of Long Island Cares, said that usage of Baxter’s Pet Pantry, along with the food pantries organized by the organization, has increased during the pandemic. “A little more than 48,000 people have come to us who have never been to an emergency food pantry at all,” Patcher said. “Also, what we’re seeing is people coming just for pet food. They’re okay with their own food, they just want to feed their dog or their cat.”

Long Island Cares started Baxter’s Pet Pantry 10 years ago during the recession in 2009 because Patcher said members were reading about people who were unable to care for their pets because they had lost their jobs. They were forced to place their pets in animal shelters because they couldn’t afford to feed them. Emergency food assistance is provided by Baxter’s Pet Pantry for families with pets, she said.

Coach Meeting House, which has been keeping locals entertained through drive-in movies and daily new flavors of alcoholic and non-alcoholic slushies served alongside meals in a drive-thru, is encouraging customers to use the tag ‘#TheLegislator’ on social media when purchasing the cup of whipped cream for a chance to be featured on Coach Meeting House’s or Lafazan’s Instagram page.

“Small gesture, big impact,” Lundstrum said. “We are part of an amazing community where people want to help others, but not everyone has the means right now to do so. We’re proud to give others a vehicle to bring a little warmth back to our world. Plus, the dogs were cute.”

Lafazan agreed that the dogs were cute, adding that coming to the fundraiser’s kickoff on June 13 was one of his most enjoyable days in office.

“The staff would say ‘we need the legislator’ and I would come out and give the dog a treat and to see the joy on the animal’s face and the joy in the owner’s face,” Lafazan said. “It really made the day worth it.”