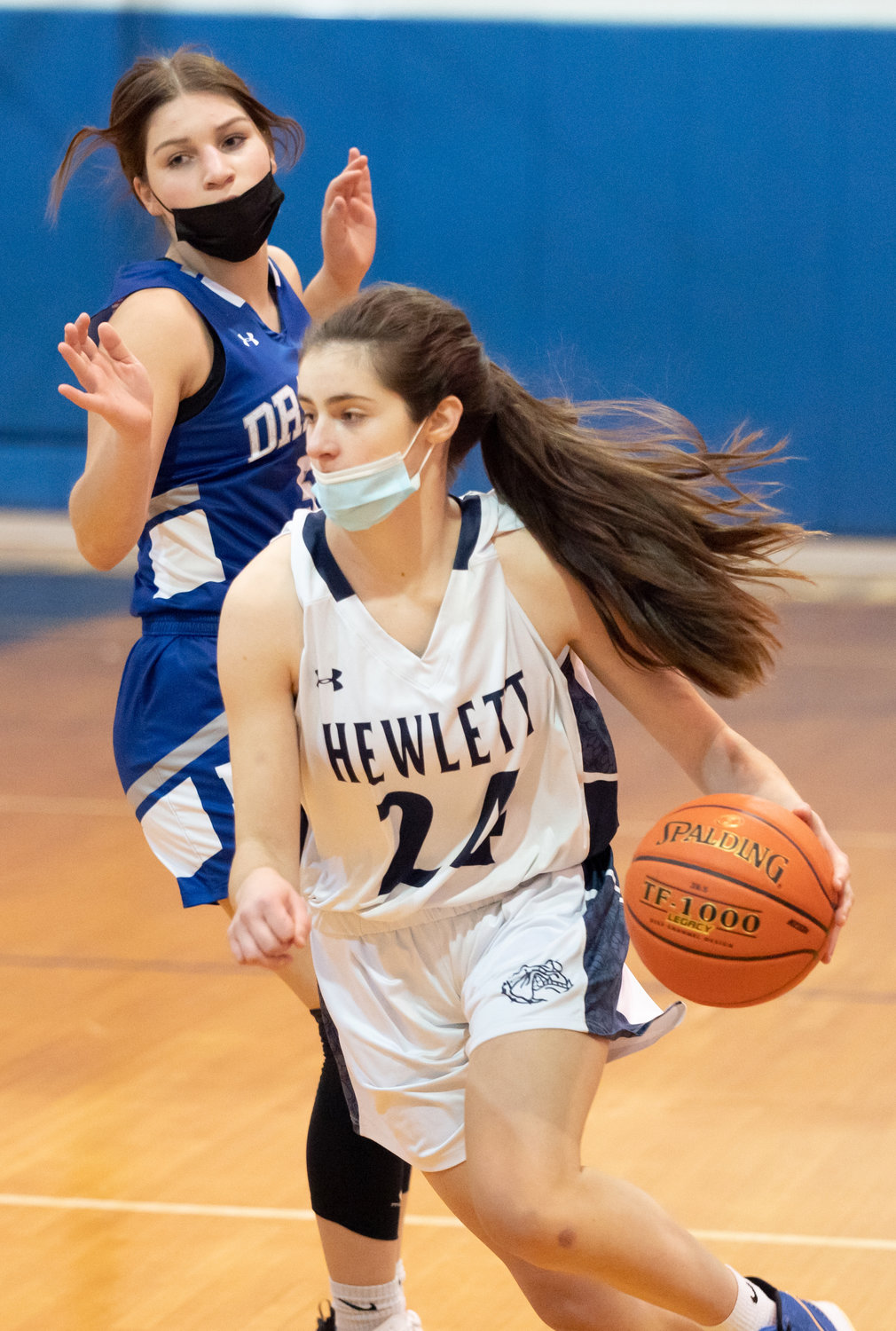 Junior Riley Weiss, right, has scored at least 50 points in three games so far this season and is leading the Bulldogs' playoff push.
Media Origin Inc./Herald
By Garrett D. Uribe

As Riley Weiss continues to ply further out into uncharted waters, her Hewlett girls’ basketball teammates and head coach also find themselves pushing towards new frontiers.
The first girl in Long Island history to average over 40 points last season (40.8, five games), the fifth-year starting, two-time reigning Long Island scoring champ Weiss (junior) is on a pace to improve her own historic mark, leading Long Island with 42 points per game, while the Bulldogs (10-3, 5-1 Nassau Conference A3) edge towards their aim of perennial contention after ending a seven-year playoff drought in 2019-20.
Taking up the reins four seasons ago amid an eight-year sub.-500 streak at Hewlett, head coach Anthony Scro had proclaimed a “rebuilding” mission was to commence. And as Weiss’s stats have steadily waxed over the winters – she has three 50-plus-point performances this season, including a career-high 55 against Kennedy Dec. 15, and has scored fewer than 36 points on only one occasion – so too have the Bulldogs’ fortunes. At Herald press time Hewlett was a half-game behind A3 leader Division (10-3, 6-1 A3).
“It really is nice to see the way the program’s been trending the past couple years,” said Scro, whose inaugural season, 2017-18, was then-eighth-grader Weiss’s second year starting on varsity. “We’re obviously fortunate that Riley Weiss is a part of it. So much attention goes to her, and rightly so. But really this team works together, doing little things to help each other, boxing out, getting rebounds, and that’s what’s going to help this program year after year.”
With Weiss sidelined to start the season, Hewlett scrapped to a 3-2 mark led by somewhat unsung senior Molly Williams – the Pippen to Weiss’s Jordan – whose 17 points and 13 rebounds, both season highs, helped Hewlett beat host Valley Stream Central, 47-33, Dec. 3. A fifth year-starting, 5-foot-10, All-County, physical forward, Williams (10.6 ppg) leads the Bulldogs averaging 11.8 rebounds.


“Without a doubt, having Molly Williams the last five years is a big reason this team’s where it is,” said Scro. “She’s one of the toughest kids I’ve ever met, takes so many bumps, bruises, getting knocked down, getting back up. She’s the rock of this team.”
Also stepping to the fore during the team’s early Weissless stretch was junior swingperson Emily Erdos (5.7 ppg), who had 11 points in Hewlett’s season-opening win at Roslyn, while first-year forward Brianna Ruta (sophomore, 5.4 ppg) had a season-high 13 points in a nonleague loss at Oceanside Dec. 4. “Emily’s doing a nice job facilitating, helping Riley get open,” said Scro of the second-year starter, whose 13 3-pointers are second on the club behind Weiss’s 34. “Brianna’s doing a nice job getting open, taking good shots. Any points we can get are a benefit.”
Looking to avenge its lone league loss, Hewlett travels to face third-place Manhasset (9-3, 5-1 A3) next week.
“The girls have become focused,” said Scro. “They recognize what’s on the line, and know they have something to build on. They’d like to keep the trend going.”