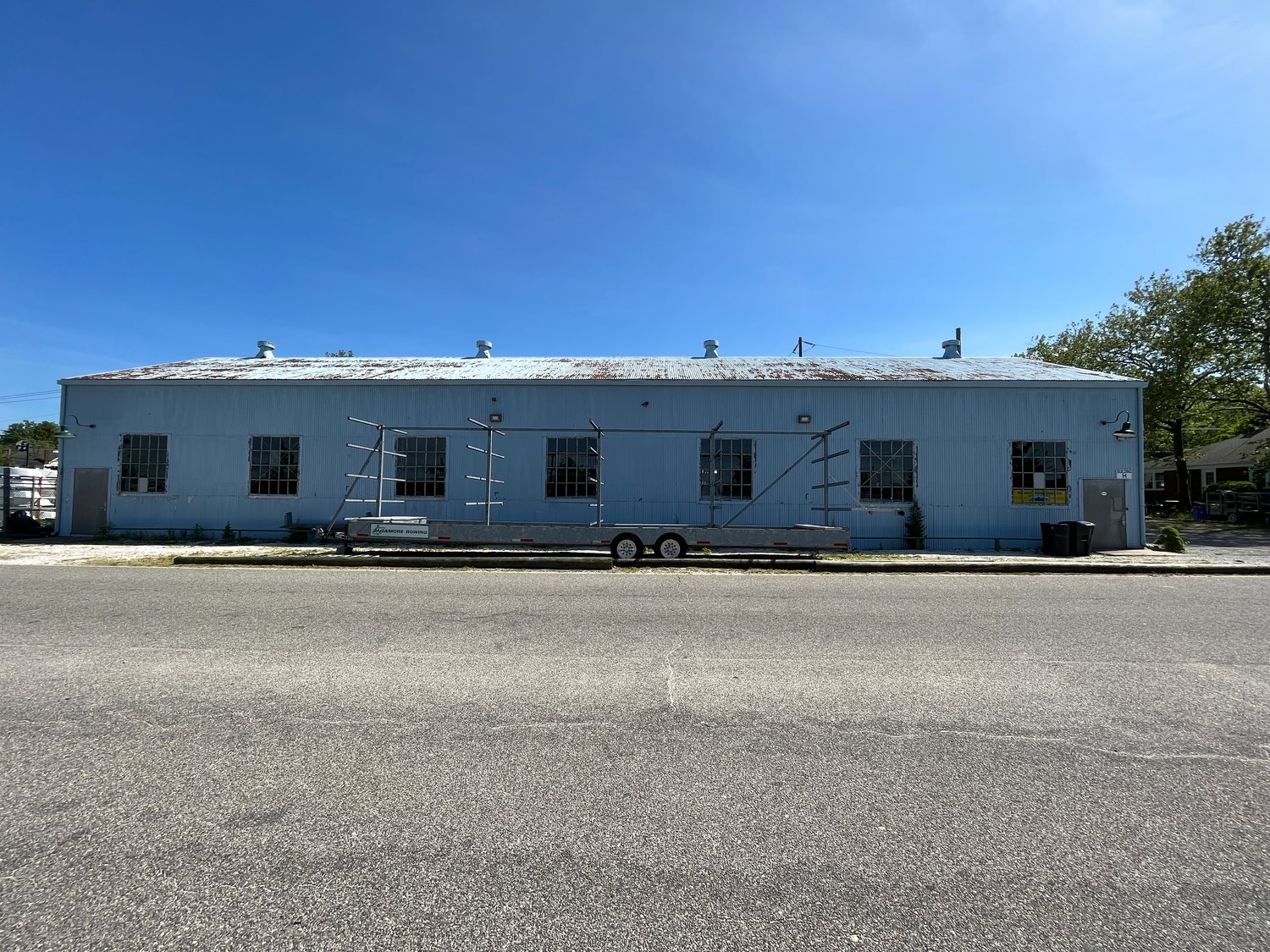 Building H is located in Theodore Roosevelt Memorial Park, next to the WaterFront Center.
Will Sheeline/Herald

We’re going to have to prepare the boathouse to be evacuated. We’ll have to take out whatever we can keep and throw away what we can’t.”
Pat Doyle, President, Sagamore Rowing Association
By Will Sheeline

For decades, rowers of all ages in the Sagamore Rowing Association have stored their boats in the warehouse Building H in Theodore Roosevelt Memorial Park Marina. But this August, after 26 years, SRA will be taking their boats elsewhere.
The nonprofit organization supports scholastic community-based rowing programs. It has been operating out of Building H since 1996, where it stores its boats and oars for races.
But on Feb. 14, the town issued a request for proposal for Building H and received petitions from other rowing groups. Marta Kane, the town’s director of community relations and public information, said the town felt responsible to give the groups the opportunity to compete for the space.
“In the interest of providing the best program to the town’s residents, demonstrating the financial and organizational sustainability to run the programs and provide the town with a suitable fee to use the premises,” Kane wrote in a statement, “a request for proposal is the best format for obtaining a broad based set of proposals that allow the town to make the most suitable selection.”
According to Pat Doyle, SRA’s president, the news of the RFP came as a shock after so many years at Building H. He asserted that the town gave SRA no warning before releasing the RFP, although the group was able to submit a proposal.


The other rowing organizations that submitted proposals were Oyster Bay Community Rowing and Oak Neck Athletic Council.
Although the town has not announced who will have use of the building, Doyle says that he received a letter that said the SRA was not putting its proposal forward for consideration. It arrived on May 15, although he said the group had been told it would receive an answer in July.
“I was shocked, I’ll be honest with you, we put in a very good proposal,” Doyle said. “We don’t even know what their final decision is yet, we’re the only one who got notice because we occupy the boathouse, so from a practical standpoint they had to tell us.”
SRA was founded in 1972, and runs numerous programs out of Building H, including beginner programs for children of all ages and summer rowing for high school students. Of them, one of the most impactful is the work it does developing local school programs.
Working with both public and private schools, like Oyster Bay High School and Friends Academy, SRA helped them create their rowing programs, offering training, storage for boats and equipment, and a chance to get out on the water.
Seniors from Kellenberg Memorial High School who were preparing for their last day on the water mentioned how great an impact SRA had made on their rowing careers.
“Sagamore Rowing allowed us to get on the water for the first time. I had not rowed on the water until I came to Sagamore with the school,” senior Kevin Kokiadis said. “So when we got in the water on the fall, it was just a completely different sport from being on” rowing simulators.
“They’ve provided formal instruction, and they’ve been coaching the students alongside our coaches at Kellenberg,” senior Lillian Stern said. “They’ve let us store our boats in the boathouse, and we’ve borrowed a few of their two-person and single boats.”
SRA’s head coach, Kate Cifarelli, who helped train the Kellenberg students, explained that the association’s programs have made an impact on numerous people over the years. She worked with SRA as an intern in its summer program in 2002.
“I’ve been here for almost 20 years, so it’s obviously very sad,” Cifarelli said. “I think everyone that’s been here has had a great connection, has been a part of the community, so, yeah, it’s sad.”
The town initially gave the SRA until July 1 to move out, Doyle said, but after he explained that that was too little time to move 26 years of equipment, the date was pushed back to Aug. 28. Now, he says he’s struggling to find a new boathouse, despite the support of the alumni from the program.
“What I’m doing now, just so you understand, is looking for locations, that’s my primary focus,” Doyle said. “We’re going to have to prepare the boathouse to be evacuated. We’ll have to take out whatever we can keep and throw away what we can’t.”
Report an inappropriate comment