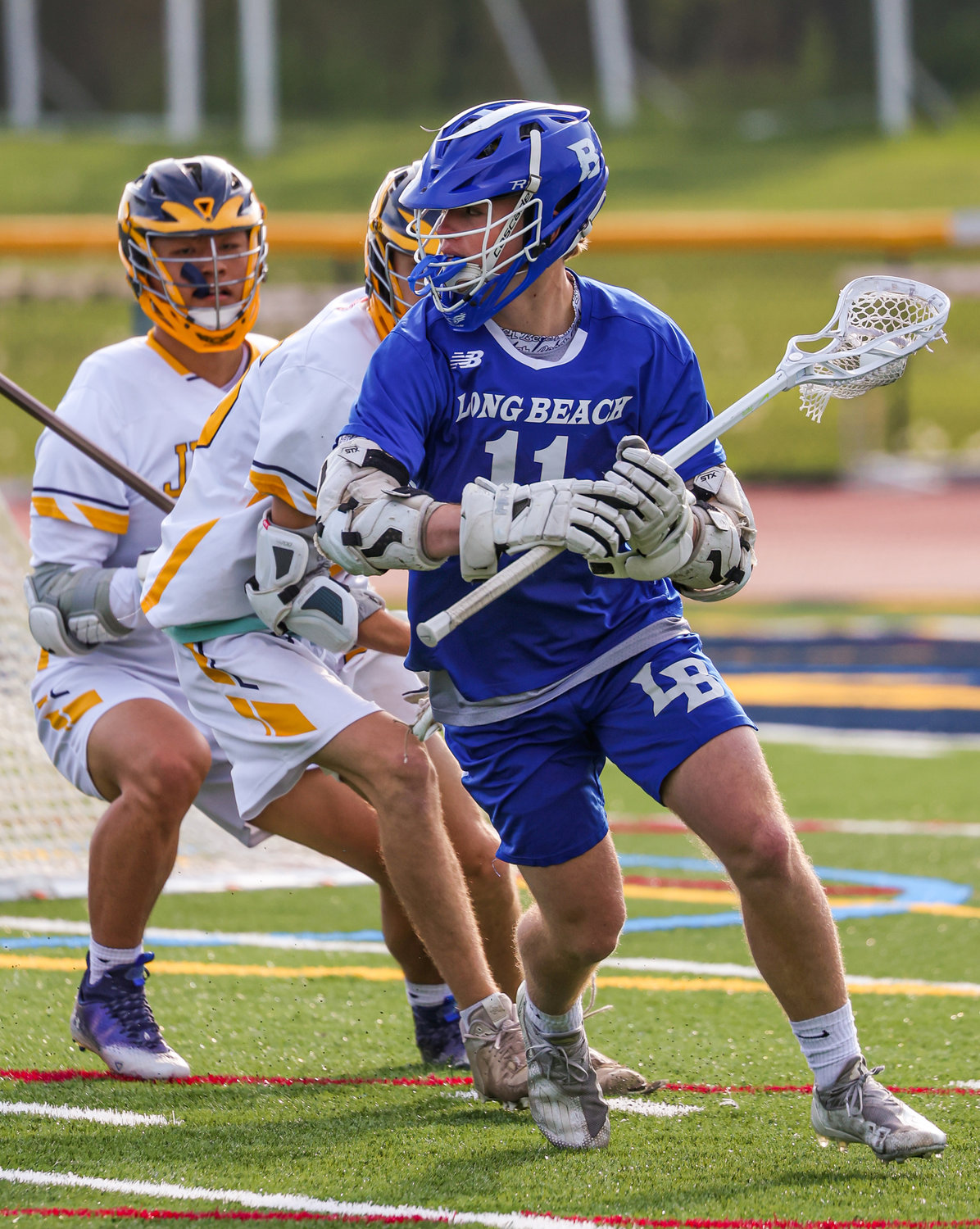 Junior Owen Stark is part of a deep and balanced offensive attack for the Marines, who beat Roslyn 15-9 last Friday night.
Karen Millindorf/Herald
By Tony Bellissimo

The Marines, who opened the season with four straight wins after capturing five games a year ago, defeated visiting Roslyn last Friday night, 15-9, for their third consecutive victory in Nassau Conference B. Junior Luke Hartman scored five times, and senior Jeffrey Conway and junior Jack Miller added a pair of goals as Long Beach (8-4 overall, 4-1 in B) leapfrogged the Bulldogs in the standings.

“It was steady rain all night, windy and cold, just like we like it,” Marines coach Jason Pearl said. “We came out flying and were able to put the breaks on for the second half and take care of the clock.

“We’ve had some slow starts lately and we put an emphasis on not coming out flat,” he added.

In scoring at least 15 goals for a third straight game since an April 22 setback to MacArthur, the Marines jumped on Roslyn with five goals in the opening quarter and seven more tallies before halftime for a commanding 12-5 lead. Senior Owen Stark added a goal and three assists.

“We’re starting to put full games together,” Pearl said. “Our defense and goalie have been pretty solid all year and now the offense is clicking. We don’t have a specific go-to guy. We have a bunch of go-to guys. If you look at our boxscores, most of our goals are assisted and the scoring is spread out.”

Based on reported scores, Hartman has 21 goals, Joe Cieleski, a senior, has 18 goals and 11 assists, Miller 15 goals and 13 assists, Stark 12 goals and 14 assists, and Conway 12 goals. Miller was the team’s top returning goal scorer with 20 last season. Even junior defenseman Jack Skarren, who Pearl said has been playing “lights out,” has scored five times.

“We’re pushing things in transition when we can, but we also can settle into our offense and run set plays,” Pearl said. “We have three big tests coming up so we have to keep improving.”

Seeded fourth in Class B, two of Long Beach’s remaining three regular-season games are against defending county champion Garden City, the No. 1 preseason seed, and No. 3 Calhoun. Also remaining is Carey, which was the Class B runner-up last spring.

The Marines feature a junior-led defense in front of senior goaltender Wally Carroll, who has 84 saves through 12 games after making 134 stops last season. The school’s football quarterback, junior Hayden Sofield, is also the lacrosse QB on defense. He scored his first goal of the season in the win over Roslyn and is also making an impact on draws since junior Chip Buehre suffered a recent injury.

Skarren, Sofield and junior Tom Cieleski are the workhorses on defense, Pearl said. “We can trust any of those three guys against any opposing threat,” he said. “They work well together and our two long pole midfielders, Chris Buonocore and Jaden Bloom, have also played big.”