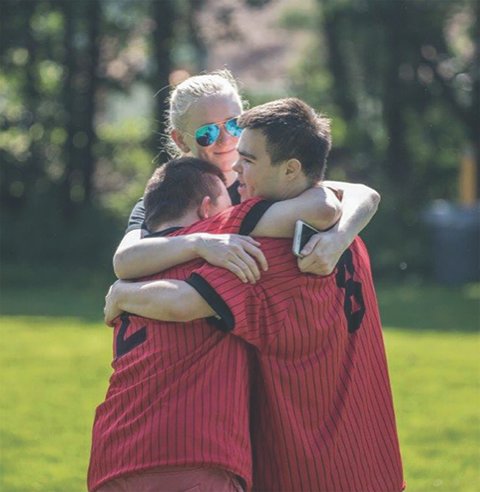 The Outreach Program for Soccer, a community-based program that works to provide children and young adults with physical and/or intellectual challenges the opportunity to play soccer, was founded by the Lee family of West Hempstead.
Courtesy EYNSA

The West Hempstead Chiefs Soccer Club was founded in 1978.
Courtesy EYNSA
Previous Next
By Robert Traverso

The West Hempstead Chiefs Soccer Club was named December Club of the Month by the Eastern New York Youth Soccer Association for its “vibrant intramural and TOPSoccer Program,” a statement released by the ENYSA said.

"West Hempstead is a very diverse and tight-knit community. Our high school-level trainers attend our schools as well as some private schools. We truly believe in giving back so all of our board members and coaches are volunteers,” said the co-president of the club, Loraine Magaraci, in the statement about the West Hempstead soccer program.

The club, established in 1978, was first run by Wes and Meg Westfal, who were succeeded by Jeff and Dani Oakden. Today, the organization is led by co-presidents John DeCristoforo and Loraine Magaraci.

The West Hempstead Soccer Club was also chosen for the award because of the community’s TOPSoccer program, the Outreach Program for Soccer, which is a community-based program that works to provide children and young adults with physical and/or intellectual challenges the opportunity to play soccer.

In 2010, the Lee family of West Hempstead put together a one-day soccer clinic for these players “to see what kind of interest there would be” in West Hempstead for soccer, the statement read.

The Lees’ daughter, Jessica Lee, was 7 years old at the time. At the event, she wore a shirt that read, "Nothing Can Stop Us." This led to the creation of the West Hempstead TOPSoccer Program, which Lee went on to lead.

“Jessica has been such an important and enthusiastic part of the program,” read the statement released by ENYYSA awarding the West Hempstead soccer club.
Lee was honored as the 2019 National TOPSoccer Buddy of the Year and received the 2020 Marg McGory Award, named after Marg McGory, the long-time advocate for those with special needs in the Diocese of Rockville Centre, as Lee volunteered and made a major contribution to the TOPSoccer Program.

“I believe that all kids should have the same opportunities in life,” Lee said in a previous Herald story. “TOPSoccer helps make that happen. Seeing the players every week and their faces full of excitement, ready to play soccer, never fails to put a smile on my face.”